Accessibility links
State TV: Chinese Spacecraft Makes Soft Landing On The Moon : The Two-Way For the country, this is a momentous occasion, a chance to show just how far China's technology has progressed. If fully successful, China would join the U.S. and the former Soviet Union as the only countries to drop an exploratory vehicle on the moon. 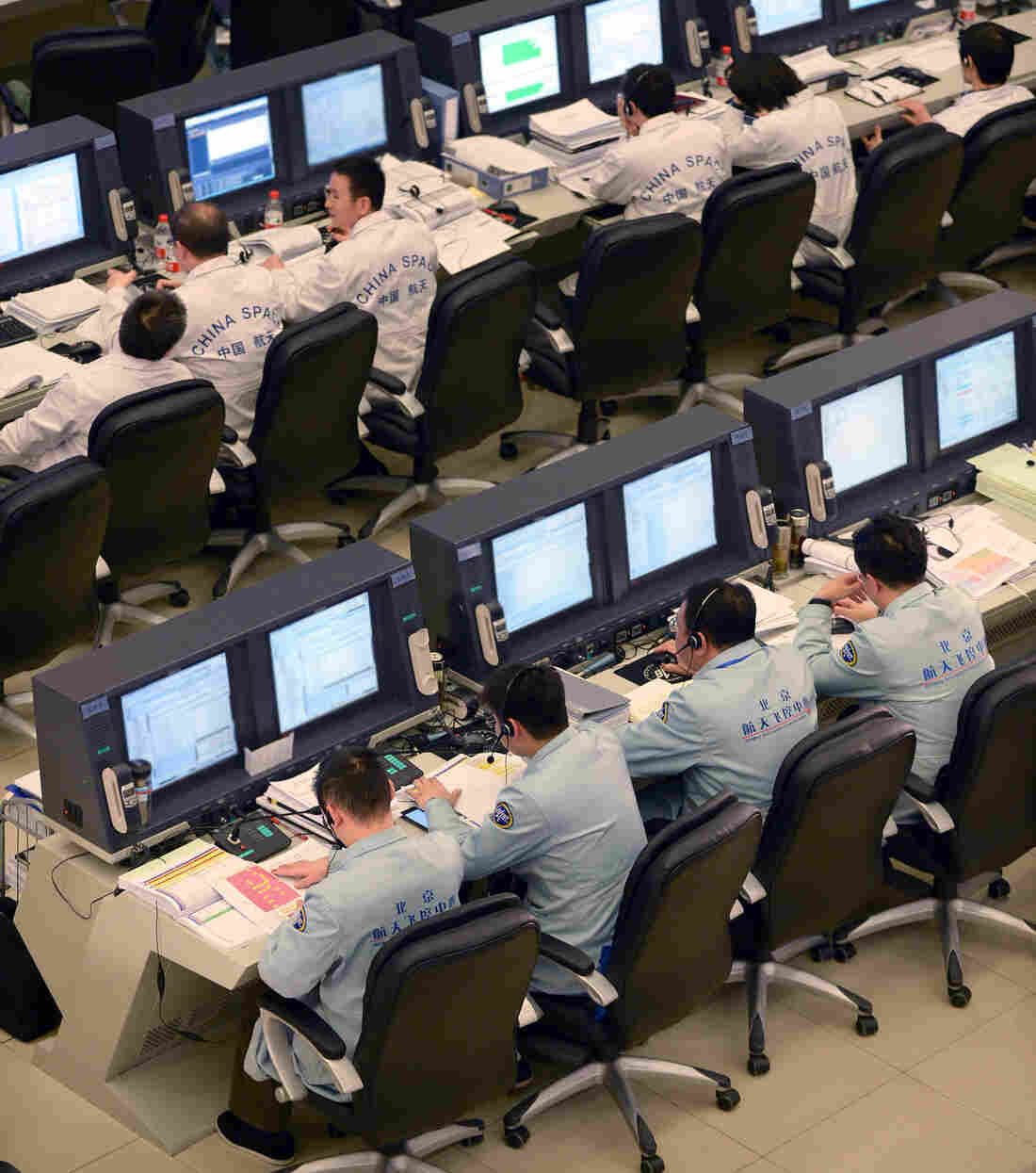 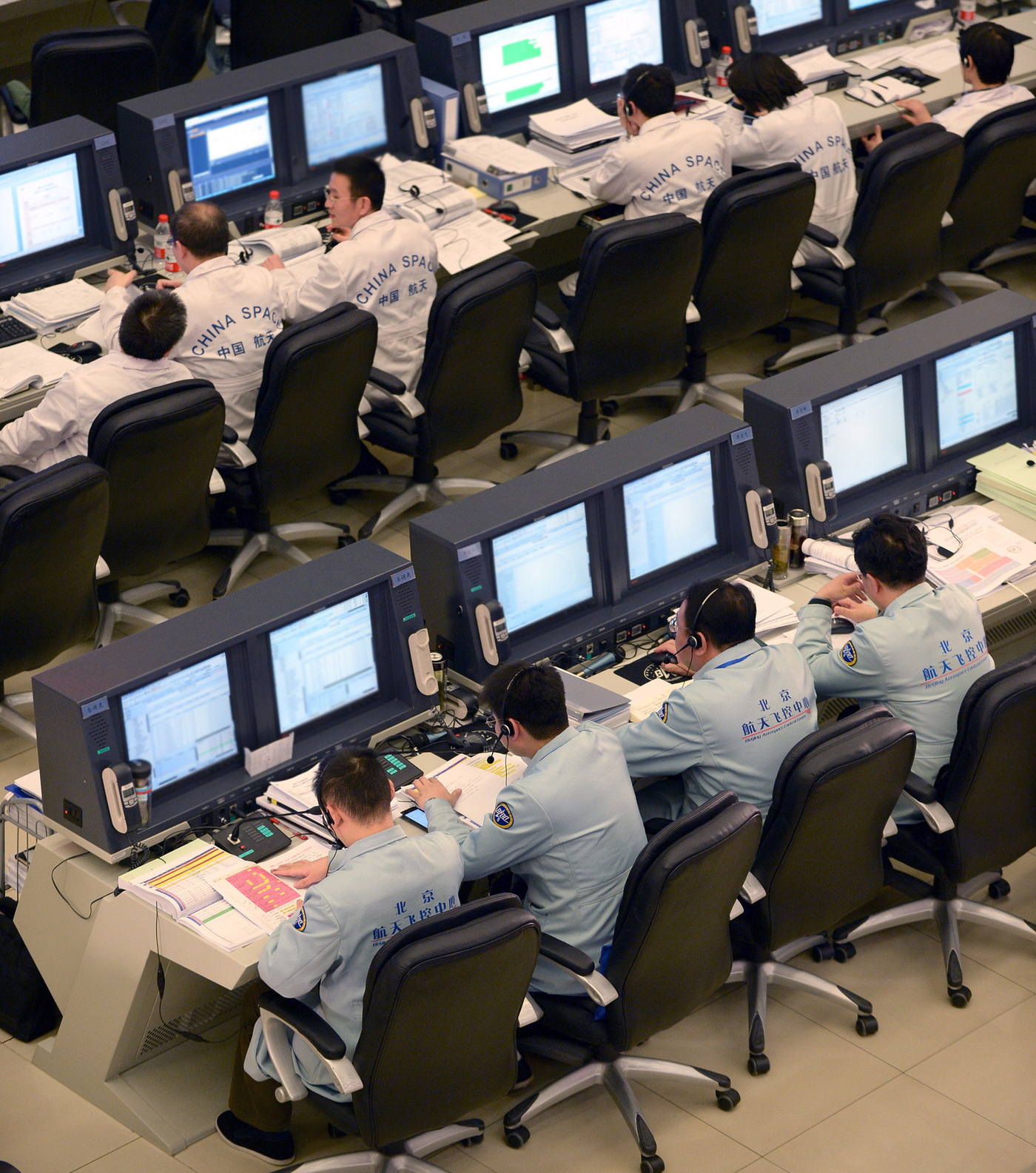 Staff members make preparations for Chang'e-3's soft-landing on the moon at the Aerospace Control Center in Beijing, on Saturday.

A Chinese spacecraft made a soft landing on the surface of the moon on Saturday, China's state television is reporting.

Televised images showed the control room at the Aerospace Control Center in Beijing erupted into applause at about 8:10 a.m. ET. Almost immediately, the lander started to deploy its solar panels and began running a systems check.

As we've reported, the Chang'e-3 mission is concentrating on the moon's Bay of Rainbows, where it is expected to release a rover called Jutu, or Jade Rabbit. Described by a government spokesman as an "acrobatic" step, the next big test for the mission is to deploy the rover.

For the country, this is a momentous occasion, a chance to show just how far China's technology has progressed. If fully successful, China would join the U.S. and the former Soviet Union as the only countries to drop an exploratory vehicle on the moon.

For the world, this would be the first mission of its kind since an unmanned Russian mission touched down in 1976. As Space.com reports, this mission also holds great scientific potential as the rover would be first to land on the moon with modern instruments. Space.com adds:

"'I think a successful landing and rover operations will be of enormous significance for lunar exploration,' said Ian Crawford of the Department of Earth and Planetary Sciences at Birkbeck College, University of London. ...

"Crawford said Yutu's ground-penetrating radar, or GPR for short, is one of the most 'significant instruments' on the rover. For one, that hardware may reveal the scale of bedding of individual basaltic flows in Sinus Iridum. That data may help identify ancient regoliths, or 'paleoregoliths,' he said.

"'I have long been interested in the very rich scientific records, which may be trapped in palaeoregoliths sandwiched between lava flows,' Crawford said, and Sinus Iridum would be an excellent location to test the concept."

The landing was, of course, a delicate technical feat. The spacecraft had to stop orbiting the moon using rockets and then as it descended, it needed to fire another set of rockets to cushion its fall without damaging the lunar rover.

State media have released this picture taken by the lander of the lunar surface: 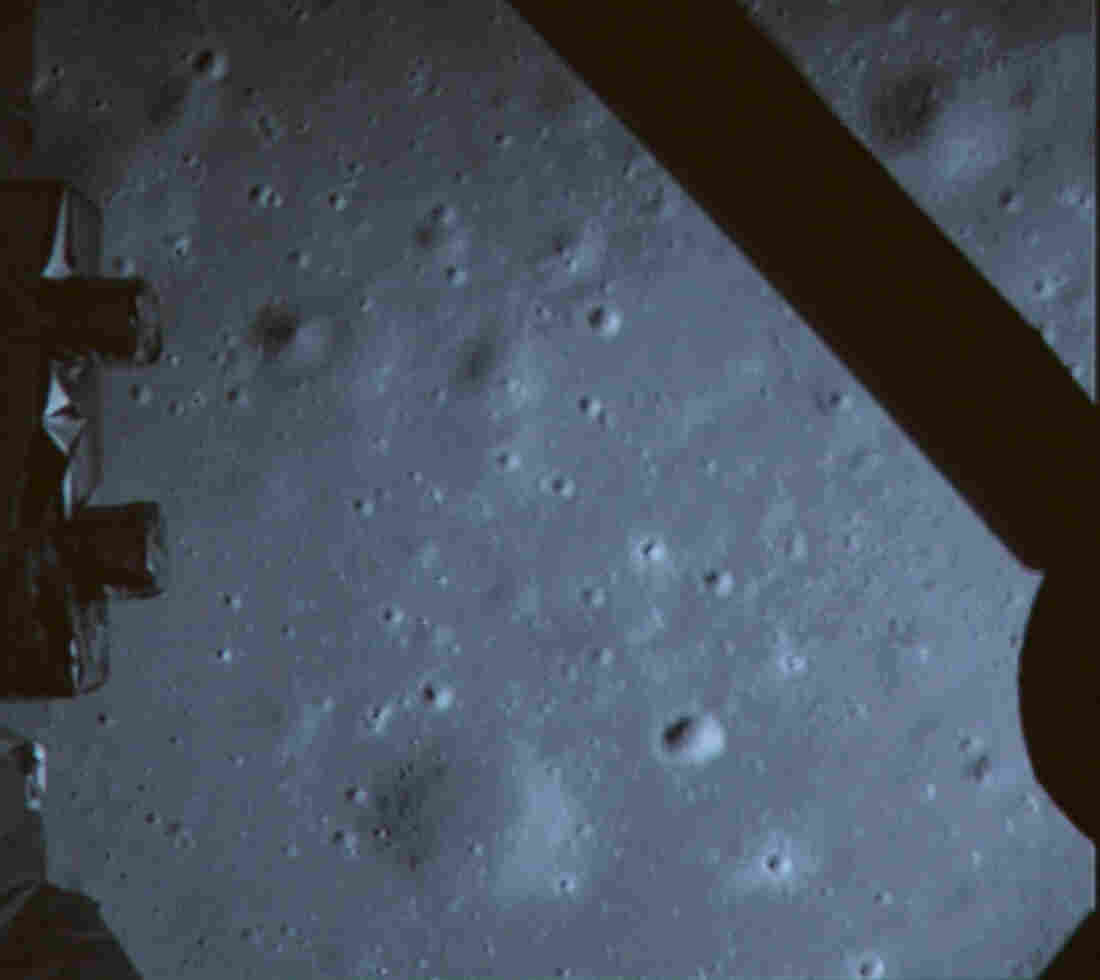 A picture of the moon surface taken by the on-board camera of lunar probe Chang'e-3 on Saturday. Li Xin /Xinhua /Landov hide caption

Dr. Li Han, of the Aerospace Control Center in Beijing, tells CCTV that the probe has landed in a relatively flat area of the moon.

That's good news, she said, because it reduces the risk for damage.