Accessibility links
India-U.S. Row Over Diplomat's Arrest In New York Escalates : The Two-Way At issue is the arrest last week of India's deputy consul general in New York. She is accused of using false documents to get a work visa for her Manhattan housekeeper. India is calling her arrest "despicable and barbaric," and announced retaliatory steps against U.S. diplomats in the country. 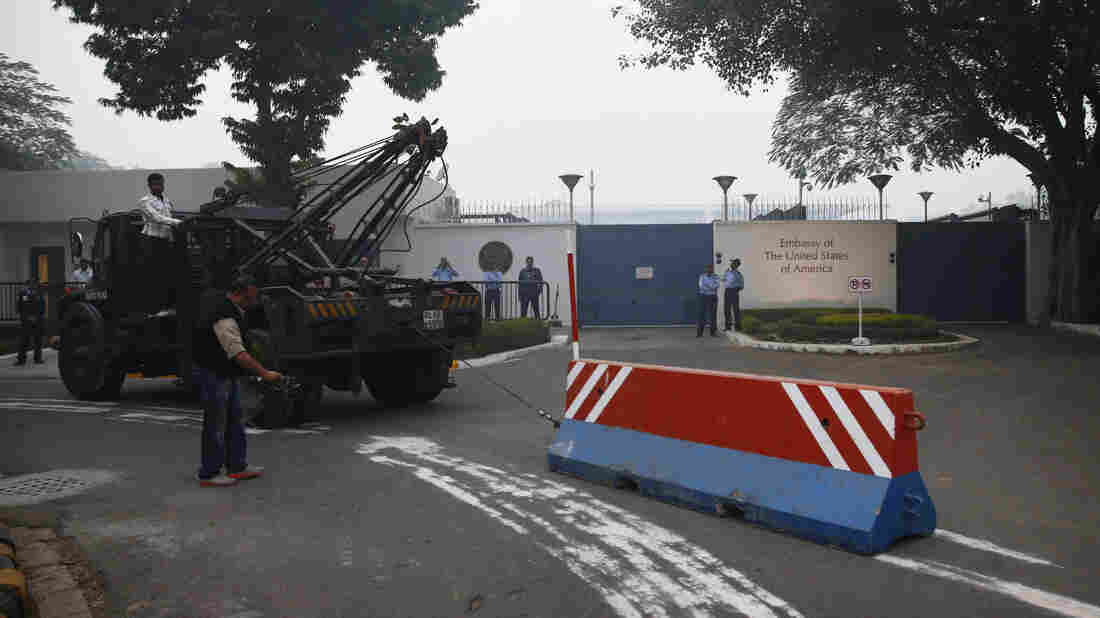 Indian workers remove Tuesday a barricade that had been erected as a safety measure outside the main entrance of U.S. Embassy in New Delhi. The move follows the arrest of an Indian diplomat in New York. Saurabh Das/AP hide caption 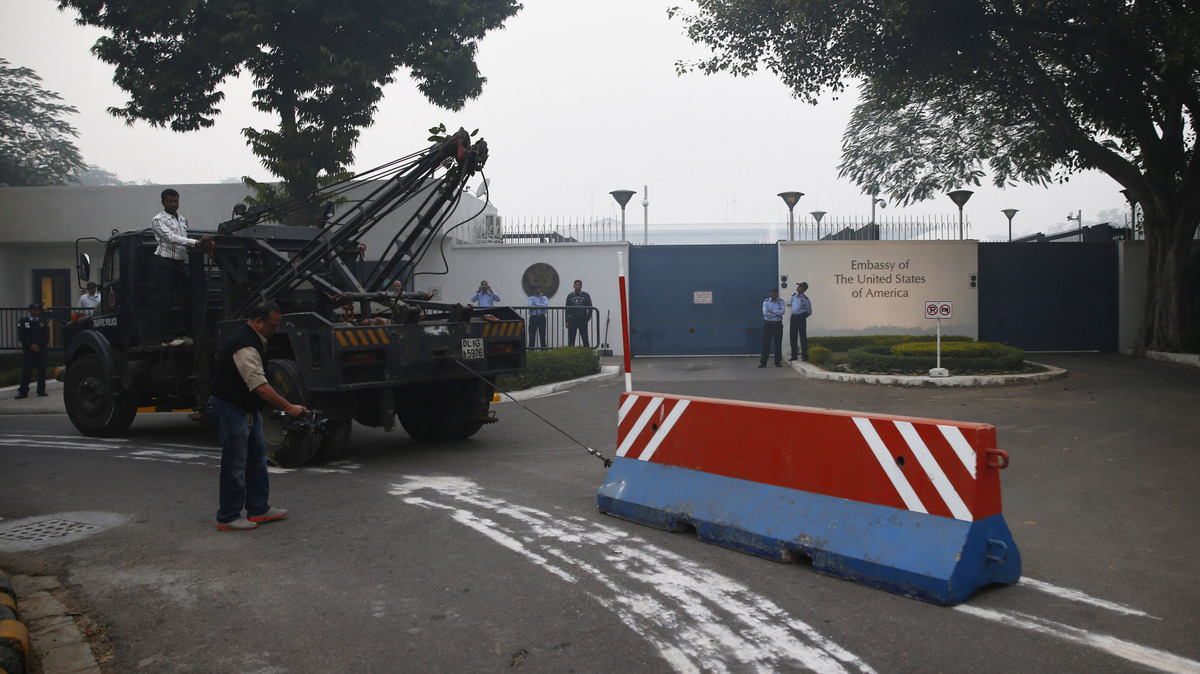 Indian workers remove Tuesday a barricade that had been erected as a safety measure outside the main entrance of U.S. Embassy in New Delhi. The move follows the arrest of an Indian diplomat in New York.

She is accused of using false documents to get a work visa for her Manhattan housekeeper. Indian media reports say she was arrested and handcuffed last Thursday as she dropped off her daughter at school. The reports say she was kept in a cell with "drug addicts" before posting $250,000 bail. The U.S. Marshals Office confirms a report that Khobragade, 39, was strip-searched, according to Reuters.

Prosecutors in New York say Khobragade, 39, said she'd pay the Indian maid $9.75 an hour, but actually paid her a little more than $3. She faces up to 10 years in prison. Khobragade has pleaded not guilty, and plans to challenge her arrest on the grounds of diplomatic immunity.

Reaction in India to her arrest was harsh, and the government outlined retaliatory measures against U.S. diplomats: It withdrew all airport passes and stopped import clearances for the U.S. Embassy, the semi-official Press Trust of India reported.

Here are some other steps, as outlined by PTI:

-- Barriers near the U.S. Embassy are being removed.

-- The government has also sought key information such as salaries paid to all Indian staff employed at the consulates, and also how much consulate officers and families pay domestic staff.

-- It has asked the U.S. to provide it with visa information and other details of all teachers at U.S. schools as well as salary and bank accounts of Indians in these schools.

-- It has also stopped all import clearances for the U.S. Embassy, including for liquor.

A "senior Indian diplomat" told The Hindu that the government could retaliate against the gay partners of U.S. diplomats.

"We also know who all have brought in their gay partners and on what grounds they were given visas though there is a law against it in India," the official said. "We can't talk about it because this law is controversial and outdated but if the U.S. wants to go to this extent, then this law and several other options are there."

A more complete list of steps can be found here.

At the State Department in Washington, spokeswoman Marie Harf said Monday that standard diplomatic procedures were followed during the arrest. She said:

"Under the Vienna Convention on Consular Relations, the Indian deputy consul general enjoys immunity from the jurisdiction of U.S. courts only with respect to acts performed in the exercise of consular functions. Again, there's different kinds of immunity. This isn't just in the U.S.; it's all around the world. So in this case, she fell under that specific kind of immunity, and would be liable to arrest pending trial pursuant a felony arrest warrant."

The Associated Press provides says "the treatment and pay of household staff [in India] ... is largely seen as a family issue, off-limits to the law." And the news agency provides context for why Khobragade's arrest has touched a nerve in India.

The "reaction may look outsized in the United States, but the case touches on a string of issues that strike deeply in India, where the fear of public humiliation resonates strongly and heavy-handed treatment by the police is normally reserved for the poor. For an educated, middle-class woman to face public arrest and a strip search is almost unimaginable, except in the most brutal crimes."