Accessibility links
Japan's Abe May Have Hoped To Anger Others With Shrine Visit : The Two-Way Prime Minister Shinzo Abe paid his respects Thursday at a Shinto shrine where war criminals are among those honored. China and South Korea protested. The U.S. expressed its disappointment. Analysts say Abe's nationalist agenda may be well served by the diplomatic dust-up.

Japan's Abe May Have Hoped To Anger Others With Shrine Visit

Japan's Abe May Have Hoped To Anger Others With Shrine Visit 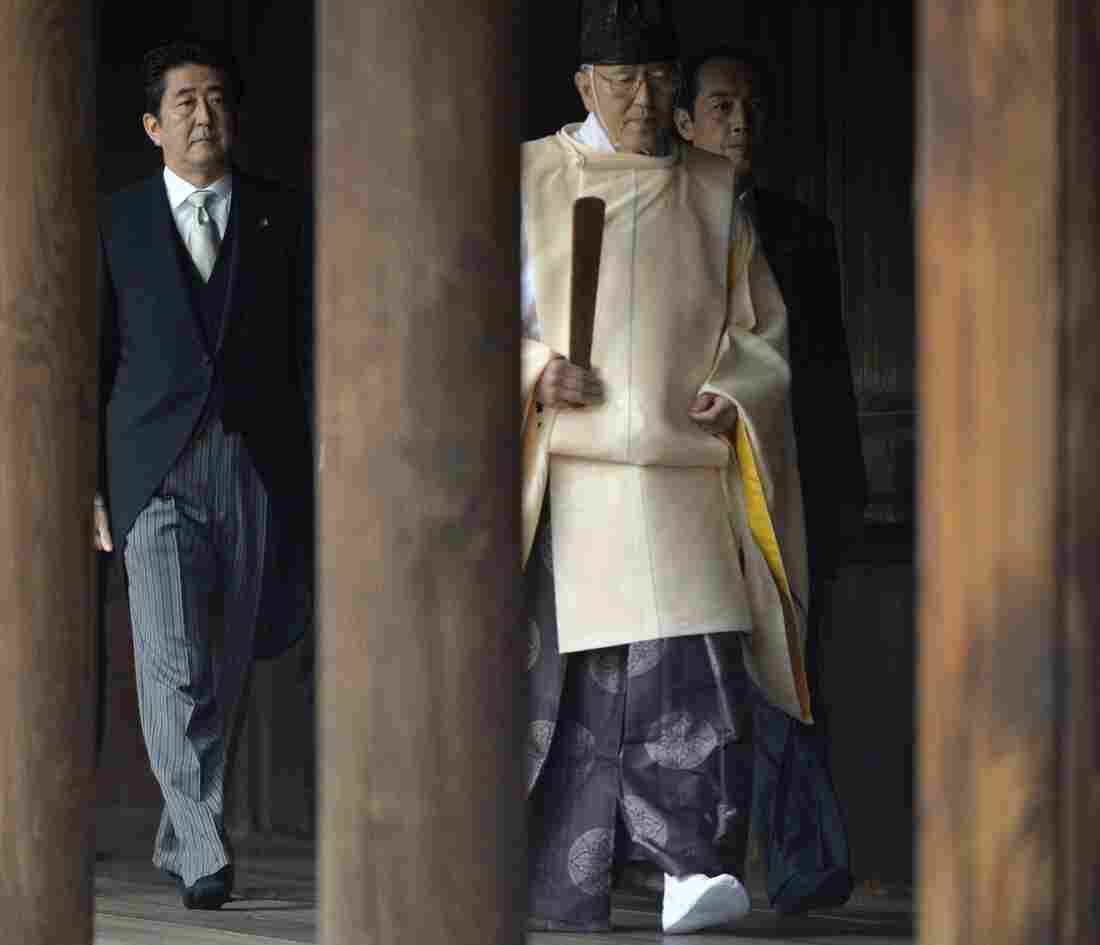 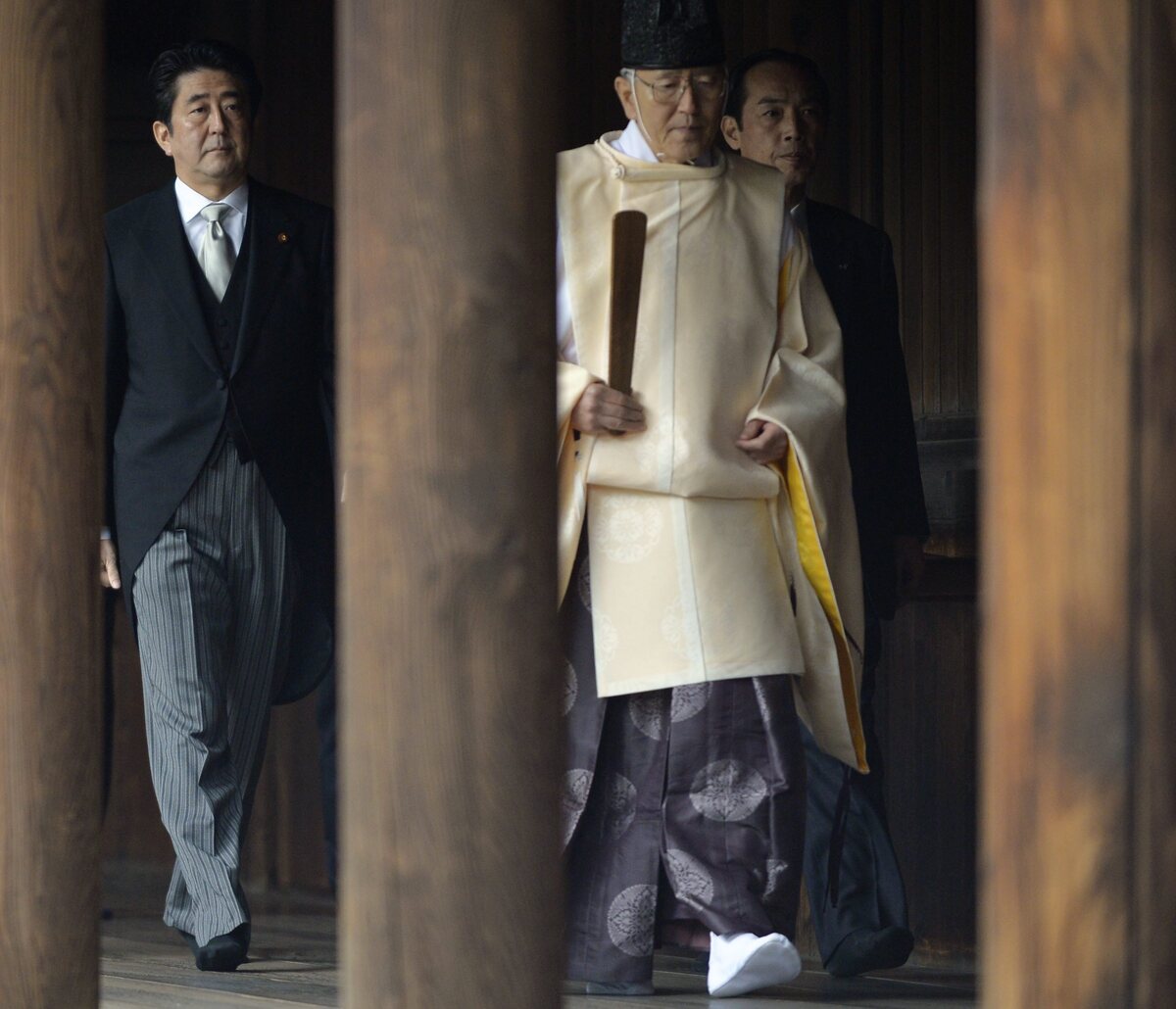 Japanese Prime Minister Shinzo Abe, left, follows a Shinto priest during his visit to the Yasukuni shrine in Tokyo on Thursday.

Prime Minister Shinzo Abe surely knew that his visit Thursday to a Shinto shrine honoring Japan's dead from World War II would be followed by protests from China and South Korea.

It was also not a surprise that the U.S. embassy in Tokyo would say America is "disappointed that Japan's leadership has taken an action that will exacerbate tensions with Japan's neighbors." Relations with China are already strained because of the nations' competing claims over uninhabited islands in the East China Sea. South Korea has also been drawn into that dispute.

It's been seven years since a prime minister went to the Yasukuni shrine in Tokyo, where the dead who are honored include convicted war criminals. Such visits, The Associated Press notes, are "a point of friction with China and South Korea, because of Japan's brutal aggression during World War II."

So why did Abe do it?

The prime minister told reporters "I prayed to pay respect for the war dead who sacrificed their precious lives and hoped that they rest in peace. ... I have no intention to neglect the feelings of the people in China and South Korea."

-- "Close observers of the Japanese prime minister say he is at heart a nationalist and a historical revisionist. He believes the trials that convicted Japan's wartime leaders were 'victors' justice.' "

-- Abe is "showing he is a tough guy" who is unafraid of China, according to Professor Jeff Kingston of Temple University in Tokyo.

-- And, Abe "wants to radically revise Japan's post-war constitution. ... It imposes not only pacifism, but also Western notions of human rights and civil liberties. It rejects Japan's uniqueness in favour of 'universal values.' ...

" 'Abe has provoked China, and China has reacted just as Abe wanted it to,' says Prof Kingston. 'There is a shrewd political calculus at work here.'

"What [Kingston] means is that having an external threat in the shape of big and frightening China may be just what Mr. Abe wants to help push through his controversial nationalist agenda at home."

"What we're seeing is the first move towards Japan really shedding that pacifist post-war stance and taking a much more proactive defensive posture," Booth said.

Japan's Ministry of Foreign Affairs has asked Chinese Ambassador to Japan Cheng Yonghua and the Chinese government to ensure the safety of Japanese people and businesses in China and to prevent potential attacks on them.

Cheng has said that Abe's visit to the shrine is a challenge to international society, that it will damage relations between the two countries and that the Japanese government must bear the consequences.

Last September, Chinese protests against Japan's purchase of some disputed islands in the South China Sea led to looting and rallies in as many as 85 cities across China.