Accessibility links
Stories Merge As 'Duck Dynasty' Fans Plan 'Chick-Phil-A' Day : The Two-Way Last year, conservatives rallied around Chick-fil-A's president. Now, some are doing the same for Duck Dynasty star Phil Robertson, who was briefly suspended from his show for things he said about homosexuals. And they're planning a similar show of support.

A&E announced Friday afternoon that it was reversing its decision to suspend Duck Dynasty patriarch Phil Robertson from the show. 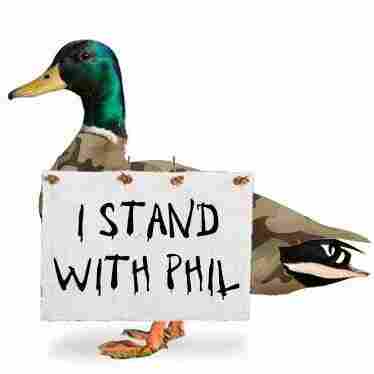 A statement from the cable channel says the decision was made after discussions with the Robertson family and "numerous advocacy groups."

The much-talked about news of what Duck Dynasty star Phil Robertson had to say about gays and his suspension from that A&E show for those comments has now merged with a similar story from 2012 of controversial words followed by a rallying of the speaker's supporters:

Some of Robertson's fans are pledging they'll be part of a "Chick-Phil-A National Support Day" on Jan. 21.

The idea, according to the Facebook campaign, is this.

In August 2012, you'll likely recall, there was a "Chick-fil-A Appreciation Day" that boosted sales at the chain as conservatives showed their support for the company's president, Dan Cathy, and his stand against same-sex marriage.

Chick-fil-A says it has nothing to do with the upcoming Chick-Phil-A Day.

The link between the two stories appears to be Eric Odom, the director of interactive media at the conservative action network Grassfire.com. The driving force behind Chick-Phil-A Day, Odom tells The Blaze that he sees the things Robertson and Cathy said as "similar, not discriminating. They are just expressing their opinions."

Robertson's opinions include his view that homosexuals are comparable to "the adulterers, the idolaters, the male prostitutes ... the greedy, the drunkards, the slanderers [and] the swindlers."

Last year's Chick-fil-A Appreciation Day was followed by a "National Same-Sex Kiss Day" outside many of the fast-food chain's outlets. We'll watch to see if Chick-Phil-A Day draws as much interest as the 2012 campaign and if there's any response from those who do not share Robertson's views.