Accessibility links
'Blood On The Snow' After Second Suicide Blast In Russia : The Two-Way An explosion Monday tore apart a bus, killing more than a dozen people and injuring many others. It followed Sunday's bombing at a train station in the same city, Volgograd. Suspicion is falling on Chechen extremists who want to create a separate Islamist state.

From the NPR Newscast: Second attack in Volgograd

Listen
'Blood On The Snow' After Second Suicide Blast In Russia

'Blood On The Snow' After Second Suicide Blast In Russia 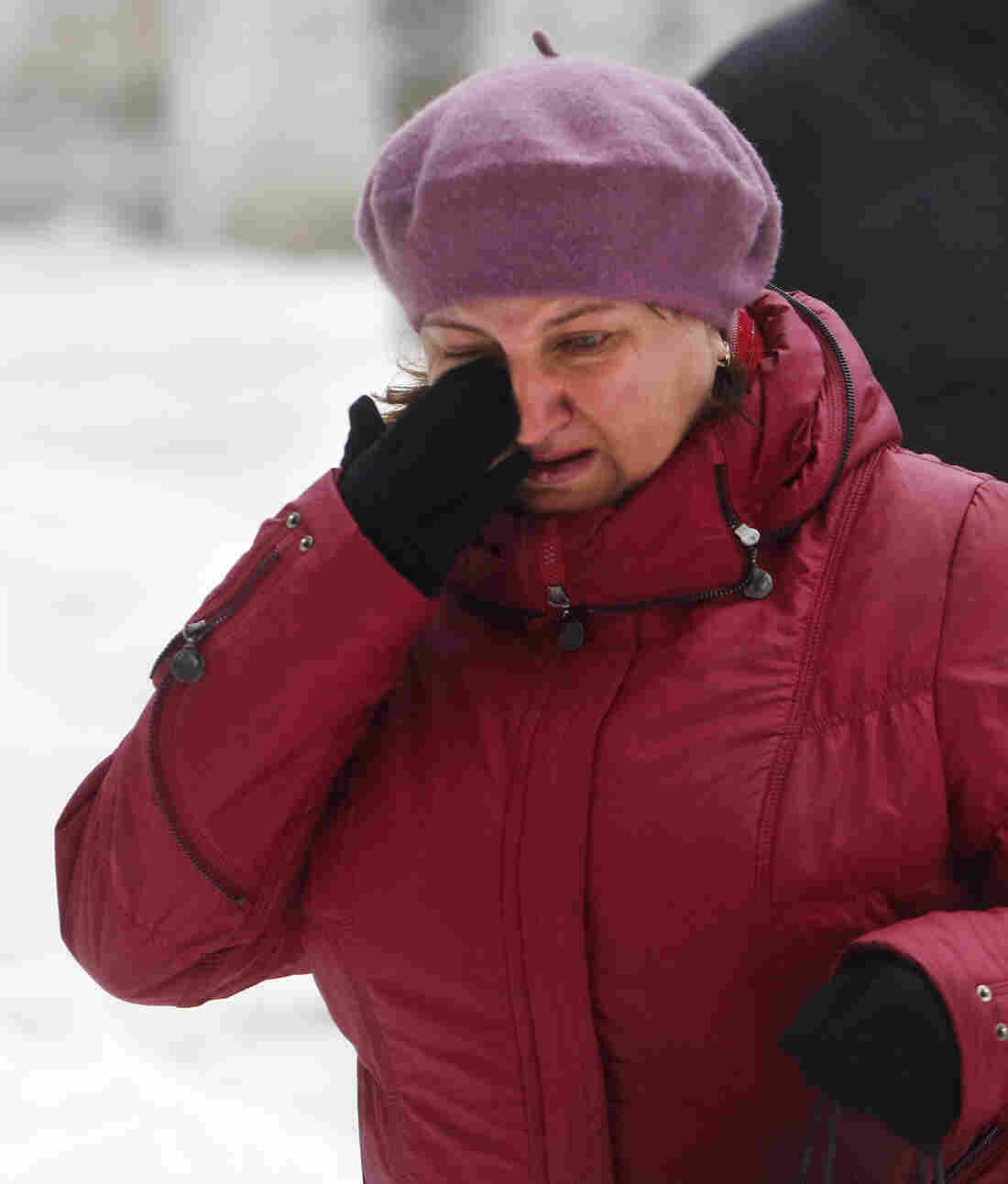 A woman wiped away tears Monday in Volgograd, Russia, after the second suicide bombing in that city in the past two days. Denis Tyrin/AP hide caption 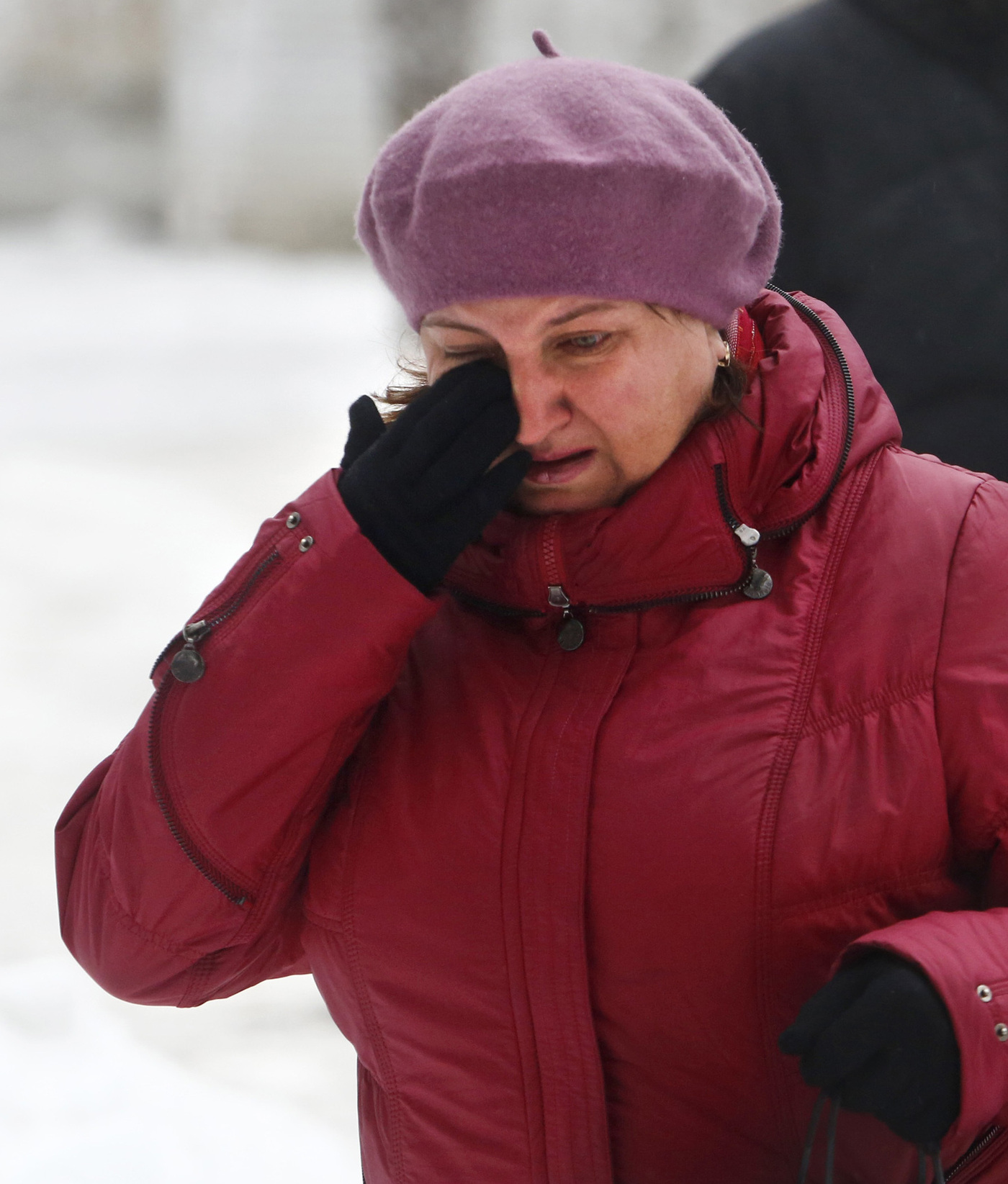 A woman wiped away tears Monday in Volgograd, Russia, after the second suicide bombing in that city in the past two days.

There's shock in the southern Russian city of Volgograd after what appears to have been the second suicide bombing in two days.

On 'Morning Edition': NPR's Corey Flintoff reports about the bombings in Volgograd

From the NPR Newscast: Second attack in Volgograd

Monday morning's blast "tore through an electric bus ... killing 14," The Associated Press reports. About 30 other people were wounded.

The carnage follows Sunday's explosion at the city's main train station — a suicide attack that killed at least 17 people. An additional 40 or so were injured by that blast.

Near the scene of Monday's bombing, Reuters writes, a woman choked back tears as she spoke: "For the second day, we are dying. It's a nightmare," she said. "What are we supposed to do, just walk now?"

The BBC says that "Maksim Akhmetov, a Russian TV reporter who was at the scene of the blast, said the trolleybus was packed with people going to work in the morning rush hour. He described the scene as 'terrible,' adding that the bus was 'ravaged' and that there were 'bodies everywhere, blood on the snow.' "

As with Sunday's explosion, Russian officials are pointing at Chechen rebels who want to create a separate Islamist state in the Caucuses as those who are likely responsible. The AP writes:

"Officials did not name names and no one has claimed responsibility for either bombing, but they came several months after Chechen rebel leader Doku Umarov threatened new attacks against civilian targets in Russia, including the [upcoming] Olympics in Sochi [about 400 miles away].

From the Web: The Guardian has posted an interactive map of "every terrorist attack in Russia since 1991." As you'll see, there's a large cluster in the region just to the east of Sochi, site of the upcoming Winter Olympics.

"Suicide bombings and other terror attacks have rocked Russia for years, but most recently have been confined to the North Caucasus region. The successive attacks in Volgograd signaled that militants may be using the transportation hub as a renewed way of showing their reach outside their restive region."

The AP also reminds readers that Volgograd, formerly called Stalingrad, may also have been targeted since it "serves as an important symbol of Russian pride because of a historic World War II battle in which the Soviets turned the tide against the Nazis."

On Morning Edition, NPR Moscow correspondent Corey Flintoff said that Umarov has called February's Winter Olympic Games in Sochi, "Satanic dances on the bones of our ancestors. There's actually some history behind that. The alpine events of the Olympics are taking place in an area where the Russian empire declared victory in its conquest of the North Caucuses way back in 1864."

As for security during the Games, Corey said that "some security experts are saying that the real danger may lie in other parts of the country — Volgograd could be an example of that."

Update at 3:35 p.m. ET. Volgograd May Have Been Chosen To Show Rebels' Reach:

Dmitri Trenin, director of the Carnegie Moscow Center, tells Corey that "disrupting the Olympics ... would be the most important evil act [the Chechen rebels] can hatch."

"If they cannot do that, at least they can spoil the atmosphere around the games," he says.

Trenin says the choice of Volgograd, the closest major city outside the North Caucasus, may be meant to show that the rebles' reach extends beyond their own region.

The effect of the attacks, he says, is to put a damper on President Vladimir Putin's year.

"So you're spoiling the year that's coming to an end, and you're sending a very bad message for the next year," he says.

According to The Wall Street Journal, "normally stoic Russians reacted uneasily in the wake of the second attack. Russian Railways announced it was imposing 'total inspections' at stations around the country during the busiest travel days of the year ahead of the long New Year's holiday. In St. Petersburg, city officials canceled a New Year's Eve fireworks display due to security concerns and authorities briefly closed Red Square and at least one Moscow metro station following reports of suspicious packages."