Accessibility links
The Other 'F Word': Brewer Responds To Starbucks Over Beer Name : The Two-Way After a small brewery owner got a letter from a law firm representing Starbucks, he saw a chance to draw distinctions between the two businesses — and to be funny. 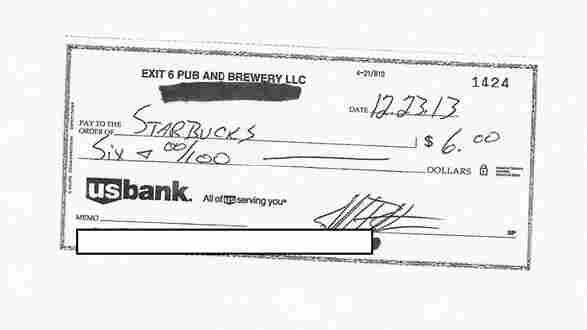 After being told that one of his products infringed on a Starbucks trademark, brewpub owner Jeff Britton wrote the coffee company a check. Exit 6 Brewery hide caption 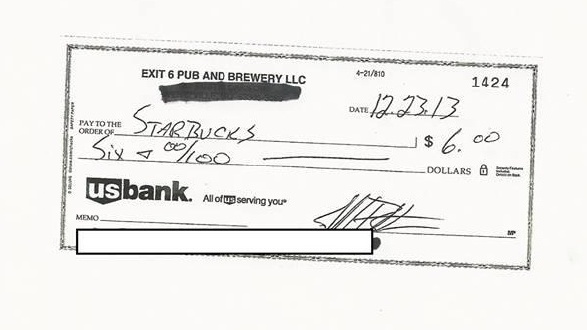 After being told that one of his products infringed on a Starbucks trademark, brewpub owner Jeff Britton wrote the coffee company a check.

In general, getting a cease-and-desist letter from a big corporation isn't the mark of a good day. But after a brewery owner got a letter from a law firm representing Starbucks, he saw a chance to draw distinctions between the businesses — and to be funny.

The coffee company's bone of contention, Missouri brewer Jeff Britton was told in a Dec. 9 letter, was the use of the name "Frappucino" to describe a stout served at Exit 6 Brewery, a brewpub in a tidy strip mall in Cottleville, northwest of St. Louis.

The name too closely resembled Starbucks' Frappuccino, Anessa Owen Kramer, an attorney at a law firm that protects Starbucks' trademarks, wrote. The similar names might cause customers to "mistakenly believe that Exit 6 or this beer product is affiliated with or licensed by Starbucks Coffee Co., when they are not," the letter said.

Exit 6 was given 14 days to respond to the company's request to remove any sources of potential confusion with the Starbucks brand.

Britton took that time to frame a response in which he informs Starbucks of his efforts to comply, going so far as to cease using the word "Frappuccino." Instead, he uses "The F Word" in his letter, which is addressed to "Ms Owen Kramer" and cc'ed to "Mr Bucks."

"As you probably don't know, Exit 6 is the proud owner of no trademarks including our own name much less than the name 'F Word' and nothing about Exit 6 is incontestable," Britton wrote.

Here's a passage in which Britton lays out the brewpub's position:

"We never thought that our beer drinking customers would have thought that the alcoholic beverage coming out of the tap would have actually been coffee from one of the many, many, many stores located a few blocks away. I guess that with there being a Starbucks on every corner of every block in every city that some people may think they could get a Starbucks at a local bar. So that was our mistake."

In an interview with local TV news KSDK, Britton explained his reaction to the company's request.

"When I got that letter, I had to laugh," he said. "I don't blame Starbucks for doing what they did, I understand why they did it and they had every right to do it. But I'm a small brewery, small bar, in a small town, that makes small batches of beer."

Britton told Starbucks that he could confirm the sale of at least three of the beers, citing three "check-ins" at the beer website Untappd — which seems to have been how Starbucks learned of the issue. So, Britton enclosed a check for $6 in profit.

"We just want to help a business like Starbucks," Britton wrote. "Us small business owners need to stick together."

Exit 6 has now renamed the drink in question — calling it the "F Word." And it seems popular with customers: On a recent day, at least a half-dozen people posted to Untappd to say they were drinking pints of it.

And in further proof that Britton knows how to turn a unique idea into a business opportunity, he's selling T-shirts that feature the $6 check, according to an interview with the Riverfront Times.

In it, the brewer also explains what an "F Word" is at Exit 6:

" 'It kind of turned into a glass of really good deliciousness,' Britton says of his drink, a splash of Founders Breakfast Stout over a glass of Exit 6's vanilla creme ale, the brewery's most popular beer. 'A couple of customers had a pint of it, and they said, 'This tastes like a Frappuccino.' "

Britton's letter drew attention on Gawker and the legal blog Above the Law after it was posted on the Exit 6 Facebook page. In it, the brewpub owner says that if not for a simple mistake, the risk of confusion between the two Frappuccino names might have been even greater.

"Unfortunately it was only similar to the F Word because we meant to call it the same thing," he wrote. "Lucky for us, we're poor spelers."

Thanks to our colleague Krishnadev Calamur for giving us a heads-up on this story.