Accessibility links
Evacuation Lifted Following N.D. Oil Train Derailment : The Two-Way Emergency and health officials lift their recommendation that people evacuate the area around a fiery train crash. Many of the 2,400 residents of Casselton, N.D., have obeyed evacuation orders, fearing a large cloud of hazardous smoke and fumes. 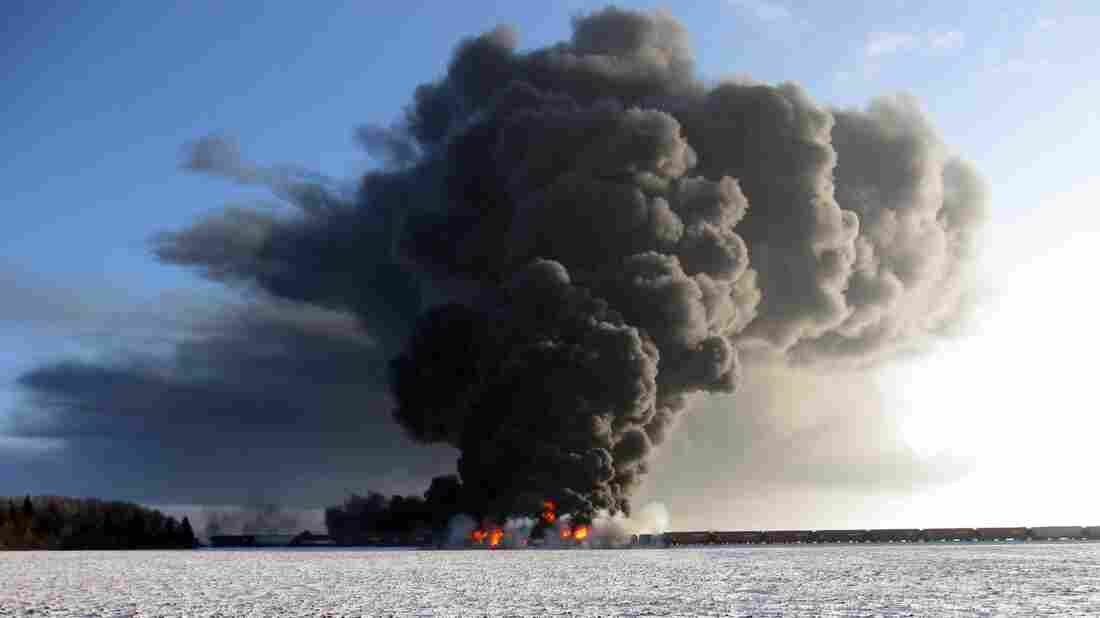 A fire burns west of Casselton, N.D., Monday, after oil tanker cars exploded following a train derailment. No one has been reported hurt in the derailment or fire. But officials are recommending residents of the town to stay away from the potentially toxic smoke. Ken Pawluk/AP hide caption 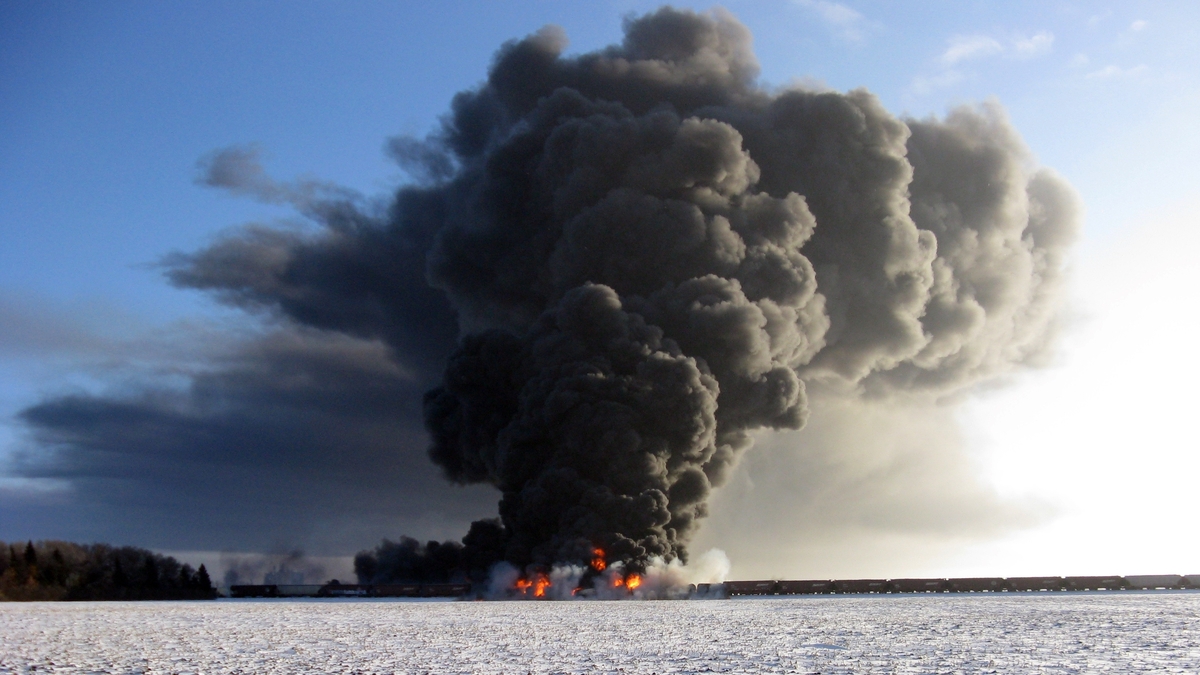 A fire burns west of Casselton, N.D., Monday, after oil tanker cars exploded following a train derailment. No one has been reported hurt in the derailment or fire. But officials are recommending residents of the town to stay away from the potentially toxic smoke.

One day after a train carrying crude oil derailed and sparked explosions near a small North Dakota town, officials are warning of a cloud of toxic fumes. Many of the 2,400 residents of Casselton, N.D., have followed evacuation orders.

A fire sparked by the crash burned through the night and into Tuesday morning, with thick smoke complicating a search of the crash scene just outside Casselton's city limits.

Investigators have not yet determined what triggered the incident.

While people who live close to the scene of the train crash are urged to use caution, emergency and health officials say they are lifting their recommendation that people evacuate the area.

"The voluntary evacuation order will be lifted today effective at 3:00pm," according to a statement from the Cass County sheriff's office, citing experts in air quality and environmental health.

Update at 1:50 p.m. Details From The National Travel Safety Board

From a news conference today, here's how the NTSB's Robert Sumwalt described the derailment, which occurred around 2:10 p.m. Monday:

"A westbound BNSF freight train carrying grain derailed," he said. "When it derailed, a portion of that train fouled – or went over onto the adjacent track. Subsequently, the eastbound BNSF train struck cars of the derailed train.

"The manifest for the eastbound train listed the product carried as petroleum crude oil."

The NTSB has sent an investigative team from Washington, D.C., to inspect the site. But Sumwalt said that their main challenge today was that the wreckage was still burning.

From Prairie Public, Dave Thompson reports for our Newscast unit:

"Twenty-one cars of the 106-car oil train caught fire when another train on a parallel track derailed and struck the tankers. At least two of the tankers exploded — sending balls of fire hundreds of feet into the air.

"About two-thirds of the city heeded the call for a voluntary evacuation. Officials were concerned about a toxic cloud from the fires.

"The danger is subsiding. And Cass County Sheriff Paul Laney says it was a combination of preparation — and luck.

"'If you look, and that thing happened a half-mile into town, we'd be looking at a very different discussion here today,' he says. 'So a lot of things went right.'"

"No injuries were reported. One person was treated for a minor respiratory problem."

This morning, Casselton officials urged businesses to remain closed for at least part of the day. And they said that at a news conference scheduled for today, "We hope to hear information as to when life in our community will return to normal."

Officials are also citing fears that shifting winds could send the dangerous clouds of smoke toward populated areas.

The crash has led Casselton's mayor, Ed McConnell, to say it's time to "have a conversation" about alternatives to shipping crude oil through the town.

That's according to the Bismarck Tribune, which cites McConnell as saying that as many as 100 people might have died if the derailment had occurred inside the city. Casselton "dodged a bullet," McConnell told the newspaper.

The train was carrying crude from North Dakota's Bakken oilfields, which were also the source of oil that exploded after a train derailed in Quebec this past July. The ensuing calamity claimed 47 lives.

Oil from the Bakken fields was also on a train in Alabama that derailed and exploded in November, as the Globe and Mail reported.

The newspaper added, "Questions are being raised about the growing practice of moving oil by rail, particularly from the Bakken region, where the crude is thought to be more explosive than transporters and oil producers previously believed."