Accessibility links
Wicked Winter Storm Leaves Deadly Trail Behind As It Moves Out : The Two-Way After roaring into the Northeast and New England, where it has dumped 2 feet of snow in some places, the system is heading for the Canadian Maritimes and out to sea. As it blasted parts of the nation, the storm caused at least 11 deaths and thousands of canceled flights.

Wicked Winter Storm Leaves Deadly Trail Behind As It Moves Out

Wicked Winter Storm Leaves Deadly Trail Behind As It Moves Out

The blast of winter weather that dumped 2 feet of snow in some parts of the Northeast and New England was being blamed for at least 13 deaths as of Friday afternoon.

And while the storm, as we said earlier, was heading off into the Canadian Maritimes and out to sea, it was continuing to cause massive disruptions for travelers. As of 5:20 p.m. ET, according to FlightAware.com, 2,706 flights within, into or out of the U.S. had been canceled Friday. That was on top of Thursday's 2,373 cancellations. More than 5,651 flights had been delayed across the nation. FlightAware's "Misery Map" is here.

The deaths, according to The Associated Press, included traffic-related fatalities in New York, Michigan, Kentucky, Indiana and Illinois. In Byron, N.Y., just south of Rochester, "a 71-year-old woman suffering from Alzheimer's disease froze to death after she wandered away from her rural home," the AP says. 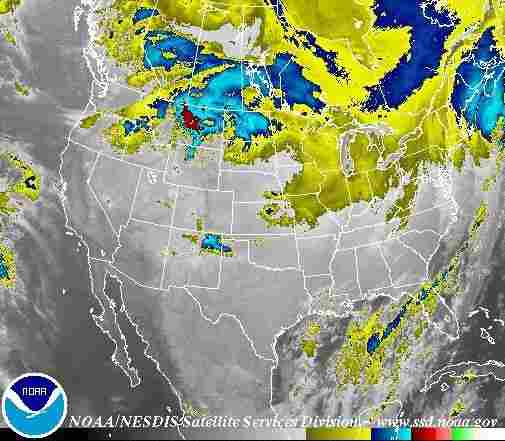 It's been a big storm: The worst may have passed, but an early Friday satellite image shows that bad weather still stretched across much of the nation. National Weather Service hide caption 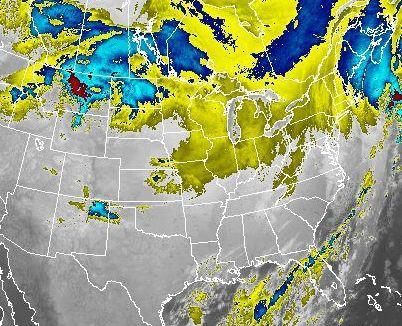 It's been a big storm: The worst may have passed, but an early Friday satellite image shows that bad weather still stretched across much of the nation.

Our original post, from 7 a.m. ET, picks up the story:

That winter storm we warned about Thursday has lived up to its billing:

-- "A blustering post-Christmas snowstorm that has dropped nearly 2 feet of snow just north of Boston, shut down major highways in New York and forced U.S. airlines to cancel thousands of flights nationwide is continuing its bitter cold journey through the Northeast." (The Associated Press)

-- "The first winter storm of 2014 hit Massachusetts Thursday, bringing with it nearly two feet of snow in some areas, gusting winds and frigid temperatures. Wind-whipped, fluffy snow continued to fall across the state, buffeted by wind gusts at around 40 miles per hour." (Boston's WBUR)

-- "The cold is incredible. As I write this, it's 2 above in Boston, just three degrees shy of the January record for today. I don't use the words bitter, frigid, or dangerous very much when it comes to cold, but today they are all appropriate." (Meteorologist David Epstein on the Boston Globe's Weather Wisdom blog)

-- "New York Gov. Andrew Cuomo ordered the Long Island Expressway to be shut down throughout Nassau and Suffolk counties at midnight Friday in order to facilitate snow removal. Interstate 84 in the Hudson Valley was closed at 5 p.m. Both are expected to reopen at 5 a.m. Friday, conditions permitting. In New Jersey, Gov. Chris Christie said all non-essential state workers should stay home on Friday." (New York's WNYC)

-- "Two low pressure systems combined to drop anywhere from several inches up to 8 inches of snow on the Philadelphia region overnight, forcing closure of the city schools and many other districts in the area." (Philly.com)

As The Weather Channel says, "over the last couple of days, the storm has also laid down a swath of snow in parts of the Midwest and Great Lakes, including the Chicagoland area where a foot or more of snow was measured in some locations."

The good news, according to the National Weather Service, is that the heavy snowfall "should wind down this morning across the Northeastern U.S. ... Accumulations should continue throughout the morning across coastal sections of New England before winding down as the strengthening surface low exits into the Canadian maritimes."

On Thursday, according to FlightAware, 2,366 flights into or out of the U.S. canceled and another 7,480 were delayed.

Twitter, as you'd expect, has plenty of posts about the weather. Here's one this morning from ESPN's Buster Olney:

"The dogs and cat waited at the door to go outside, took two steps into the drifts of snow and wind — and ran back inside. They're not dumb."