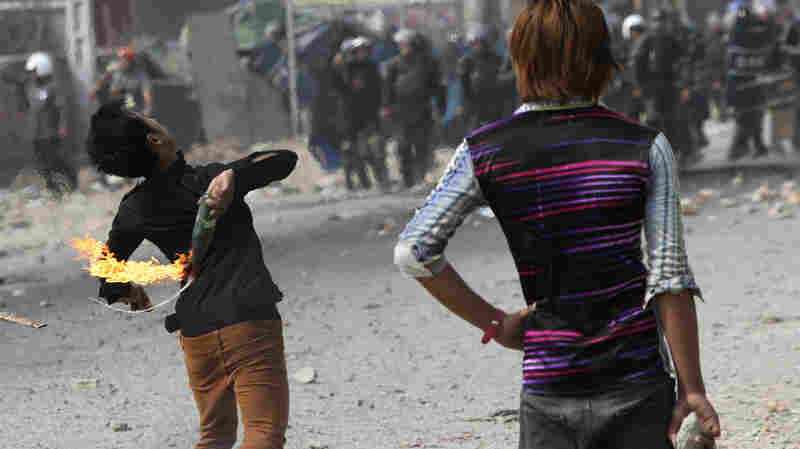 A worker throws a petrol bomb after clashes broke out during a protest Friday near Phnom Penh, Cambodia. At least four people were killed when police opened fire at the workers. Samrang Pring /Reuters /Landov hide caption 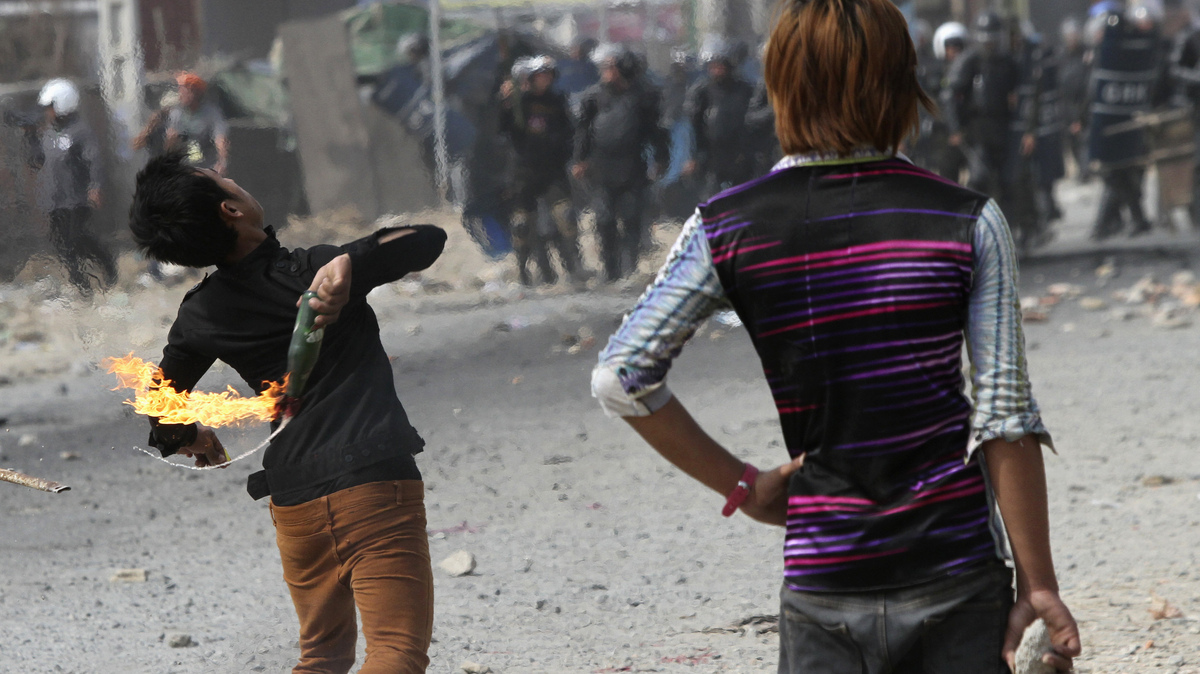 A worker throws a petrol bomb after clashes broke out during a protest Friday near Phnom Penh, Cambodia. At least four people were killed when police opened fire at the workers.

"Chuon Narin, deputy chief of the Phnom Penh Municipal Police, said the four were killed and about 20 others wounded in a southern suburb of the capital after several hundred workers blocking a road began burning tires and throwing objects at police officers. Witnesses said some officers fired AK-47 rifles into the air and that others shot at ground level."

Rong Chhun, president of the Cambodian Confederation of Unions, told the Phnom Penh Post that the four dead were striking workers, and condemned the crackdown. But the national military police spokesman, Brig. Gen. Kheng Tito, defended the use of force.

"We're just doing our jobs. We fear the security situation, so we have to crack down on them," he said. "If we allow them to continue the strike, later on, it will become messy and more complicated to control."

As we've previously reported, Cambodia's garment industry is one of the world's largest. It employs about a half-million people in 500 shoe and garment factories, many of them foreign-owned. The sector is the country's biggest export earner.

Protests by garment workers are not unusual, but Friday's deadly violence represents an escalation. The protests took place at Canadia Industrial Park, which houses factories that supply to companies including H&M and PVH, the owner of Tommy Hilfiger and Calvin Klein. The Phnom Penh Post reports:

"The demonstration at Canadia comes amid an ongoing national strike that began last week when the Ministry of Labour's Labour Advisory Committee set a new monthly minimum wage of $95 — $65 less than striking unions demanded. The ministry raised the minimum wage another $5 earlier this week, but many workers have remained on strike."

Friday's violence also comes amid growing protests against Prime Minister Hun Sen, who has been in power for more than two decades. His party won elections in July that opposition groups said were flawed. The AP notes:

"Although the wage and election issues are not directly linked, the opposition has close ties with the country's labor movement. Last Sunday, many workers joined a massive political rally organized by the opposition. ...

"The standoff over wages presents Hun Sen with a dilemma, as increasing violence could drive the workers into a tighter alliance with the opposition, providing a vast pool of people for their increasingly confident street demonstrations. But the government is also close to the factory owners, whose exports fuel the economy and who are generally seen as financial supporters of Hun Sen's ruling Cambodian People's Party."

Last year, Cambodia shipped more than $4 billion worth of garments and textiles to the rest of the world. But the industry is rife with complaints about pay and working conditions.