Accessibility links
Phil Everly Dies; Transformed Rock 'N' Roll With Brother Don : The Two-Way The tight harmonies in the Everly Brothers' string of hits in the '50s and '60s were huge influences on others such as Simon & Garfunkel, The Hollies, and The Beach Boys. Among their biggest songs: "Bye Bye Love," "Wake Up Little Susie" and "All I Have To Do Is Dream." Everly was 74. Brother Don is 76.

One half of one of the most influential duos in rock 'n' roll history has died.

Phil Everly, 74, died Friday in a Burbank, Calif., hospital. His son Jason tells The Associated Press, NPR and other news outlets that the legendary singer suffered from chronic pulmonary disease.

Everly's brother Don, now 76, is among the other survivors.

Their webpage on the Rock & Roll Hall of Fame catalog of inductees rightly notes that the brothers "transformed the Appalachian folk, bluegrass and country sounds of their Kentucky boyhood into a richly harmonized form of rock and roll. ... With Don taking the melody and Phil harmonizing above him, the Everlys released a steady string of hit records between 1957 and 1962 that crossed over from country to pop and even R&B charts." 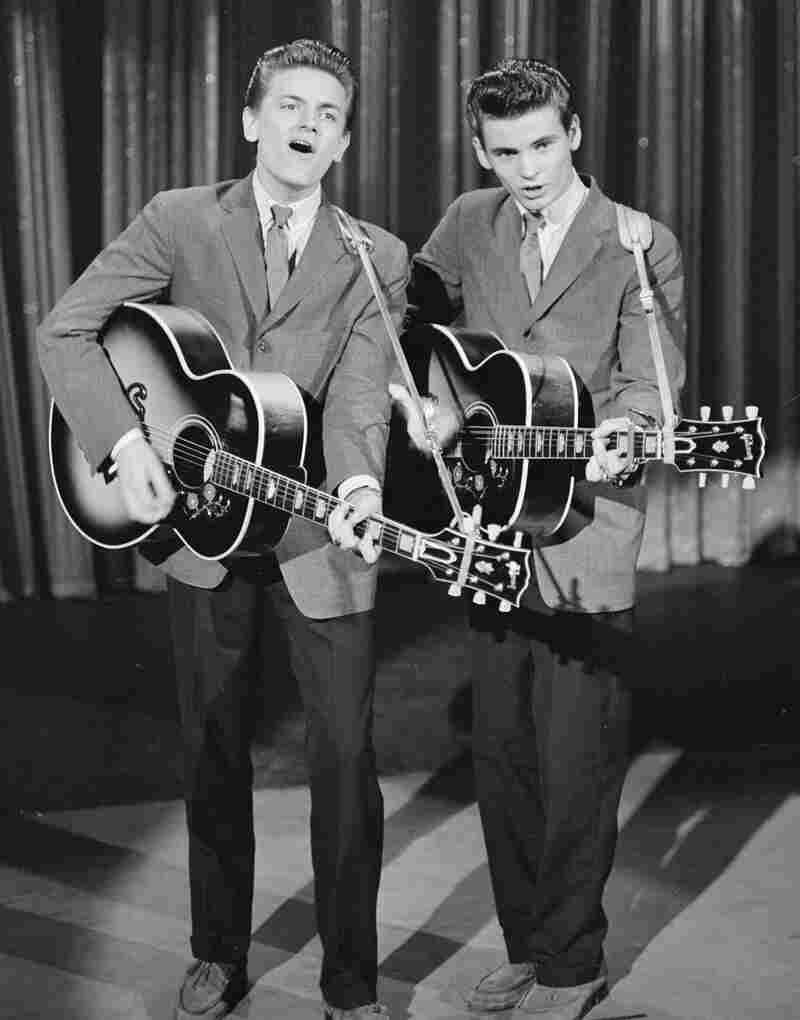 The Everly Brothers (Phil on the left, Don on the right) singing on The Ed Sullivan Show in 1957. CBS/Landov hide caption 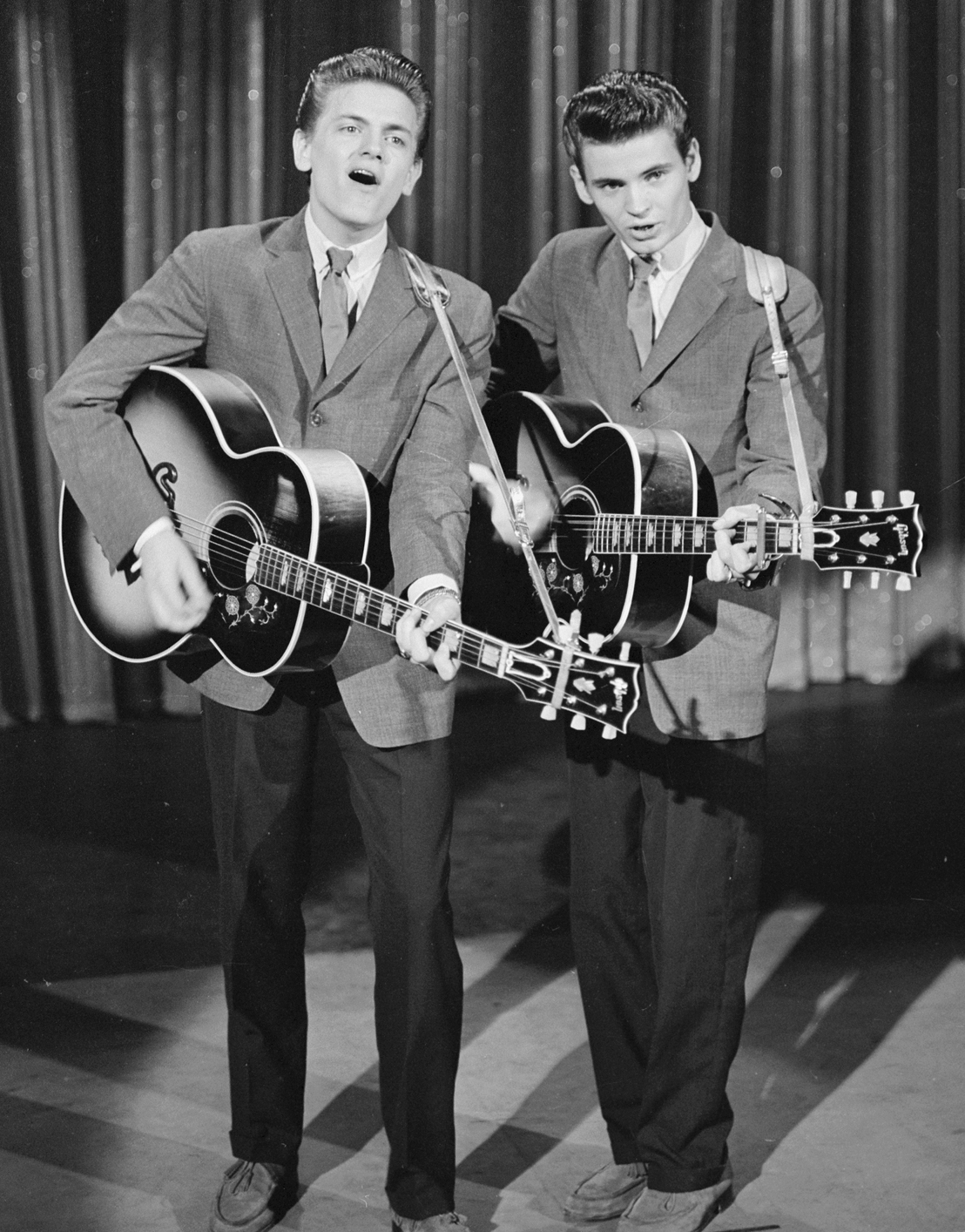 The Everly Brothers (Phil on the left, Don on the right) singing on The Ed Sullivan Show in 1957.

They also wrote songs that became hits for others, including:

But a list of hits doesn't do justice to their place in rock 'n' roll. As the Hall of Fame adds, the brothers' "close-harmony singing directly influenced a rising tide of musicians that included the Beatles, the Hollies, Simon and Garfunkel and the Byrds."

Last October, singer Graham Nash talked on Fresh Air about how the Everly Brothers about what happened the first time he and friend Allan Clarke heard "Bye Bye Love." The English lads were at a school dance when they started to walk across the room:

"We got halfway across the floor and 'Bye Bye Love' by The Everly Brothers came on — and it stopped us in our tracks. We sang together, so we knew what two-part harmony was, but this sounded so unbelievably beautiful. ... Ever since that day, I decided that whatever music I was going to make in the future, I wanted it to affect people the same way The Everly Brothers' music affected me on that Saturday night."

Nash and Clarke would go on to found The Hollies, and Nash would later be part of the super group Crosby, Stills & Nash (and sometimes Young, of course).

When Simon and Garfunkel toured in 2003, Rolling Stone writes:

"They knew only one group could possibly share the bill with them: the Everly Brothers. As teenagers, Paul Simon and Art Garfunkel used to sing Everly Brothers songs on the grounds of Forest Hills High School. They were their single biggest influence, with no close second. ...

"Simon and Garfunkel didn't want their biggest influences to actually open for them, so the Everlys were called onstage in the middle of the show to perform 'Wake Up Little Susie,' 'Let It Be Me' and 'All I Have to Do Is Dream' before Simon and Garfunkel came back out to join them on 'Bye Bye Love.' Seeing two of the most combative duos in rock history all sharing the stage was a pretty incredible sight."

Both of those famous duos split and reunited over the course of their careers. As the AP says, the Everly Brothers "broke up amid quarreling in 1973 after 16 years of hits. ... Their breakup came dramatically during a concert at Knott's Berry Farm in California. Phil Everly threw his guitar down and walked off, prompting Don Everly to tell the crowd, 'The Everly Brothers died 10 years ago.' "

But the brothers reunited 10 years later, "sealing it with a hug," Phil Everly said.

Update at 4 p.m. ET. They Were "Most Beautiful Sounding Duo I Ever Heard," Paul Simon Says.

"Paul Simon, whose song 'Graceland' includes vocals by Phil and Don Everly, said in an email on Saturday morning: 'Phil and Don were the most beautiful sounding duo I ever heard. Both voices pristine and soulful. The Everlys were there at the crossroads of country and R&B. They witnessed and were part of the birth of rock and roll.' "

The brothers were among the original inductees into the Rock and Roll Hall of Fame in 1986. That April, Don Everly talked with NPR's Noah Adams about their singing and their career.