Accessibility links
Supreme Court Halts Gay Marriages In Utah : The Two-Way The order puts marriages on hold until an appeal is decided by the U.S. Court of Appeals for the 10th Circuit. Utah has been allowing same-sex marriages since Dec. 20. 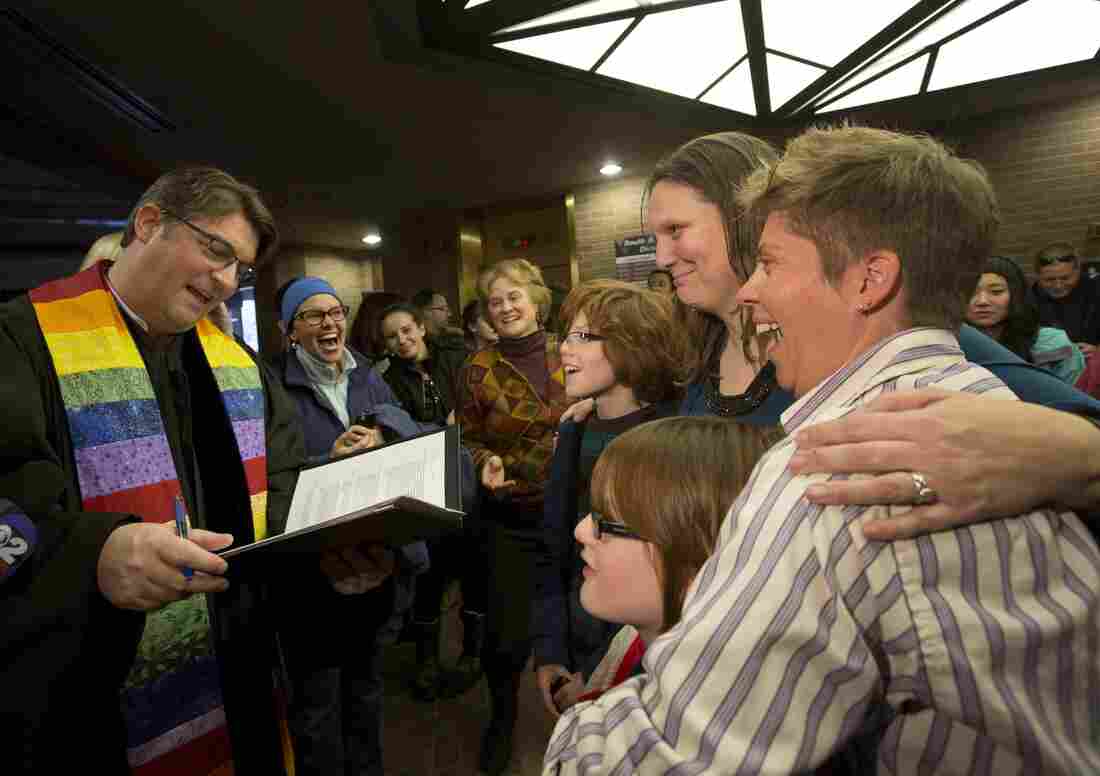 Ruth Hackford-Peer, right, and Kim Hackford-Peer are married by Rev. Curtis Price, while hugging their two children in the lobby of the Salt Lake County Clerk's Office on Dec. 20. Kim Raff/AP hide caption

The United States Supreme Court has put same-sex marriages on hold in the state of Utah.

The order issued by the court on Monday halts same-sex marriages until an appeal is decided by the U.S. Court of Appeals for the 10th Circuit.

If you remember, U.S. District Judge Robert J. Shelby struck down Utah's constitutional ban on gay marriage on Dec. 20, saying it irrationally demeans the dignity of same-sex couples. Since then, Utah has sought to put that ruling on hold, while it appeals the decision to a higher court.

After Shelby and then the full 10th Circuit Court denied Utah's request for a stay, the state asked the Supreme Court to step in. It has now ruled in favor of Utah, halting any new marriages in the state.

Now, the case — known as Kitchen v. Herbert — is before the 10th Circuit. It will weigh an appeal of Shelby's decision, which declared Utah's ban on gay marriage unconstitutional. That appeal could take months.

During a press conference, Utah Attorney General Sean Reyes said it is unclear whether existing gay marriages are valid.

"We don't have the answer and don't want to rush to any legal conclusions," Reyes said. "There's no precedence."

James Magleby, one of the attorneys who argued the case for the same-sex couples who brought the suit against Utah, said while the stay is "disappointing," they believe they can successfully defend Shelby's decision before the 10th Circuit.

Utah Gov. Gary Herbert said in a statement that the Supreme Court made "the correct decision today."

"As I have said all along, all Utahns deserve to have this issue resolved through a fair and complete judicial process," Herbert continued. "I firmly believe this is a state-rights issue and I will work to defend the position of the people of Utah and our State Constitution."

That same argument was made in the state brief filed before the Supreme Court right before it issued its stay.

"A stay will eliminate the daily affront to the State and its citizens of being compelled by a single federal judge to solemnize marriages that strike at the heart of State's democratic process and of the conjugal view of marriage embraced by the vast majority of its people," Monte Stewart, a Boise attorney and former BYU law professor who founded the Marriage Law Foundation, wrote on behalf of the state.

The short order says that Justice Sonia Sotomayor referred the request to the full court.

As Lyle Denniston of SCOTUSblog notes, that seems to mean that the stay has the support of the full court because the order does not note any dissent.

"The ruling can be interpreted as an indication that the Court wants to have further exploration in lower courts of the basic constitutional question of state power to limit marriage to a man and a woman. Had it refused the state's request for delay, that would have at least left the impression that the Court was comfortable allowing same-sex marriages to go forward in the 33 states where they are still banned."

The order, by the way, does not give any reasoning for the decision. As we reported, Utah argued that allowing marriages, while an appeal is in process, would lead to confusion.

If Shelby's ruling was eventually overturned, the state argued, it would leave same-sex couples who married in Utah under a "cloud of uncertainty."

On CNN, legal analyst Jeffrey Toobin said it's still unclear what the status of the marriages already performed is now.

The New York Times reports that Judge Shelby was only the second federal judge to strike down a state ban on same-sex marriage.

The first was Judge Vaughn R. Walker in San Francisco, who struck down California's Proposition 8.

Last year, the Supreme Court sidestepped a major decision on Prop. 8, when it decided supporters of the ballot measure outlawing gay marriage lacked standing to bring the case before the Court. That meant that Judge Walker's decision striking down the ban stood, but the high court decided the issue on technical grounds and did not issue a wide-ranging opinion regarding the constitutionality of gay marriage bans.

If the appeals process works its way to the Supreme Court, this may be the case that forces the high court to wrestle with the big issue, potentially handing down an opinion that settles the issue of gay marriage nationally.

We asked Carl Tobias, a professor of constitutional law at the University of Richmond, what the odds are that this becomes the case the Supreme Court uses to weigh in on gay marriage.

"Odds of certiorari being granted are always long, but you only need four votes. The order was very terse, so all you can do is speculate. SCOTUS has seemed reluctant to issue a national rule in this area. I agree that both sides seem committed to the fight and if the 10th Circuit affirms the district court, SCOTUS might take the case. However, it might also wait for other courts to rule in similar cases to see their reasoning."