Accessibility links
Ships Break Free In Antarctica, U.S. Icebreaker Not Needed : The Two-Way A Russian ship that had been taking scientists and passengers on an expedition got stuck. So did a Chinese icebreaker that tried to help. The U.S. Coast Guard sent its biggest icebreaker on a mission to help. But the ships have been able to get out on their own. 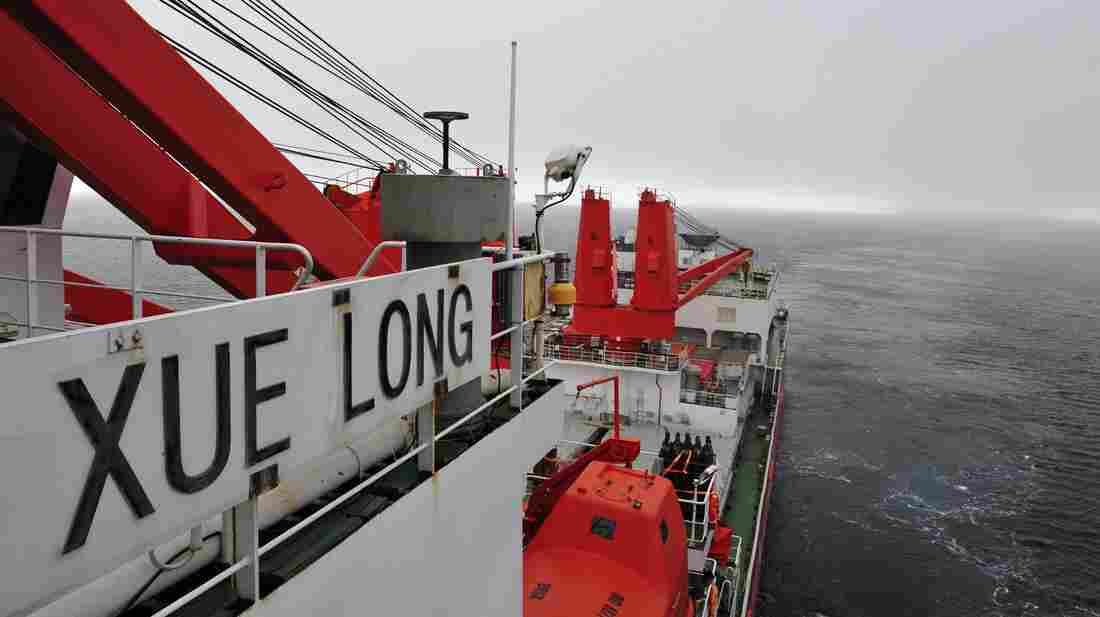 The Chinese research vessel and icebreaker Xue Long broke free from ice and was back in the open waters off Antarctica on Tuesday. Zhang Jiansong /Xinhua/Landov hide caption The Chinese research vessel and icebreaker Xue Long broke free from ice and was back in the open waters off Antarctica on Tuesday.

There's good news from Antarctica, where two ships that had been stuck in ice — one of them for about two weeks — have managed to get to open waters.

That's allowed the U.S. Coast Guard Cutter Polar Star, which is capable of breaking through heavy polar ice and had been headed to the scene to offer assistance, to return to its original mission — clearing a channel to Antarctica's McMurdo Station research base and bringing supplies to that facility.

The Coast Guard says the Polar Star "was released by the Australian Maritime Safety Authority from search and rescue duties [on Tuesday], following confirmation [that] the Russian-Flagged Akademik Shokalskiy and Chinese-Flagged Xue Long are free from the Antarctic ice due to a favorable change in wind conditions."

As we've been reporting, the MV Akademik Shokalskiy got stuck on Christmas Eve when rough weather caused a shift in the ice. Aboard the ship: 52 scientists and paying passengers, mostly from Australia, who were on an expedition to retrace the steps of retrace the steps of Australian explorer Douglas Mawson. He led the Australasian Antarctic Expedition of 1911-14.

Two icebreakers, the Xue Long and the Australian-flagged Aurora Australis, tried and failed to reach the Akademik Shokalskiy. A helicopter from the Xue Long was, however, able to ferry the 52 passengers to the Aurora Australis on Jan. 2. The Russian ship's crew stayed behind. So did the Chinese vessel after it, too, got trapped in the ice.

It was hoped that the weather would change and allow both the Akademic Shokalskiy and the Xue Long to break free on their own. But just in case, the Polar Star was sent Sunday from Sydney to see if it could assist.

Then the hoped-for change in conditions happened.

Meanwhile, the Aurora Australis and its passengers have reached the Casey Station base on the coast of East Antarctica, according to the BBC.

The Guardian, which has two correspondents traveling with the expedition, says the Aurora Australis is scheduled to be at the base for five days, "with the crew working in shifts 24 hours a day to transfer 420,000 litres of fuel (known as 'special Antarctic blend'), unload 140 tonnes of cargo and pick up 210 tonnes onto the ship. ... While the crew resupplies the base, a few of the scientists on board the Aurora will carry out short-term projects ashore while the ship is moored in the bay."