Accessibility links
Gates: Obama Made Solid Decisions, But Was Swayed By Factious Staff : The Two-Way In a long and surprisingly frank interview with Morning Edition's Steve Inskeep, former Secretary of Defense Robert Gates talked about his relationship with the commander in chief and his rivalry with Vice President Joe Biden, and described a deep rift between the approaches of senior military leadership and Obama's young Cabinet. 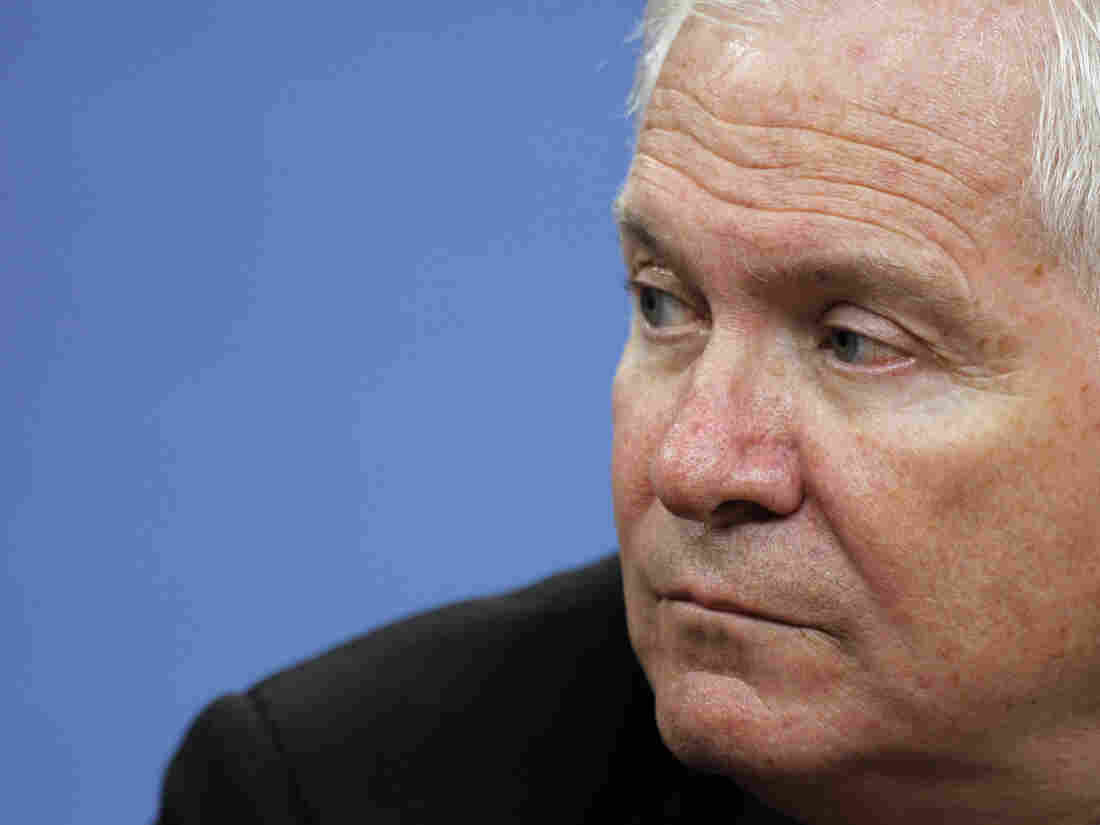 This is Part I of Morning Edition's interview with Robert Gates. Part II and a link to the complete transcript are below.

Former Secretary of Defense Robert Gates says his criticism of President Obama is more nuanced than media reports about his new book, Duty: Memoirs of a Secretary at War, would have you believe.

In a long and surprisingly frank interview with Morning Edition's Steve Inskeep, Gates talked about his relationship with the commander in chief and his rivalry with Vice President Joe Biden, and described a deep rift between the approaches of senior military leadership and Obama's young Cabinet.

Part II of the 'Morning Edition' conversation with Robert Gates

Gates, the only secretary of defense in U.S. history to keep his job with a newly elected president, said Obama was always kind to him personally and that Obama always made "decisions based on what he thought was in the best interest of U.S. national security."

However, he said, he always felt Obama thought the military was trying to force his hand on certain decisions. Gates explained that early in Obama's first term, generals and other high-ranking officials were making public statements essentially saying their strategy was the only one that would work, leaving the impression that Obama had no other choices. The suspicion that resulted, Gates said, was only fueled by the president's Cabinet.

Gates Says He Wept Each Evening Over Troops' Deaths

An example of that, Gates said, was the surge in Afghanistan. As we've reported, that's the part of Gates' book that has stirred the most controversy, because he implied that Obama lacked passion and approved the 2009 troop surge "believing the strategy would fail."

Gates said Obama didn't go into the surge believing it would fail; instead he was led to that belief by his Cabinet and especially by Biden.

That's when Steve asked Gates about perhaps the most explosive statement in his book: that Biden has been wrong about every foreign policy issue for 40 years.

"First of all, I think it's fair to say that particularly on Afghanistan, the vice president was my — he and I were on opposite sides of the fence on this issue.

"And he was in there advising the president every day. He was, I think, stoking the president's suspicion of the military. But the other side of it is, frankly, I believe it. The vice president, when he was a senator — a very new senator — voted against the aid package for South Vietnam, and the — that was part of the deal when we pulled out of South Vietnam to try and help them survive. He said that when the, when the Shah fell in Iran in 2009 — 1979, rather — that that was a step forward for progress toward human rights in Iran. He opposed virtually every element of President Reagan's defense buildup. He voted against the B-1, the B-2, the MX and so on. He voted against the first Gulf War. So on a number of these major issues, I just — I, frankly, over a long period of time, felt that he had been on the wrong — he'd been — I think he had been wrong."

Perhaps one of the more insightful parts of the interview was when Gates talked about the young members of Obama's National Security Council.

He described a clash of cultures in which those young members eschewed the chain of command. Gates, who has served under eight presidents and whose service dates back to 1966 when he joined the CIA, said he had a "different world outlook and a different experience."

Here's part of the exchange:

I had worked for probably three of the most significant and toughest national security advisers in our history: Henry Kissinger, Zbigniew Brzezinski and Brent Scowcroft. And there were things that went on in the Obama White House that, under those three guys, I am confident would have been a firing offense, such as direct calls from NSC staff members to four-star generals and so on. That just wouldn't have been allowed.

INSKEEP: Oh, they should have gone through the chain of command, you think, or through the hierarchy?

INSKEEP: And they were effectively giving orders or going around their own nominal bosses on the staff? That's what you're saying?

GATES: Well, I think the key is what you said. They were going outside the chain of command. It's not appropriate for somebody on the National Security Council staff to be in direct contact with combatant commanders.

Gates did not lay all the blame on Obama and his Cabinet. He also talked about his failures.

"At the end of the book, I also point out that I think we all did a disservice to President Obama, because the debate on Afghanistan became so divisive that the opportunities to reach across those differences I think were missed," Gates said.

"I fault myself for not reaching out more to the vice president to see where we could find common ground, because at the end of the day, in a number of important respects, I don't think our positions were that far apart. But because of the environment, because of the suspicion, because of the — just the flavor of the debate and the difficulty between the Department of Defense and the National Security Council staff, I think that those edges were sharper than they needed to be, and that's partly my responsibility."

Much more of Steve's interview with Gates is on Monday's Morning Edition. Click here to find a local NPR member station that carries the program. We'll also post the as-aired version of the interview on this post. We've also posted a full transcript of the interview.

Update at 9:55 a.m. ET, Jan. 13: Now that the audio of Morning Edition's as-broadcast conversation with Gates is available, we've added it — in two parts, as they did on the radio. To simplify our layout, we've removed the small clips from the conversation that we posted earlier. Those moments are included in the Morning Edition clips.