Surveillance programs run by the National Security Agency helped very little when it came to cases brought against individuals the United States says were linked to al-Qaida.

That's according to a review of 225 cases by the New America Foundation, which describes itself as a "nonpartisan public policy institute."

The study was trying to answer a simple question: Do government programs that scoop up massive amounts of Americans' data stop terrorists as the U.S. government says they do.

A review of court records and news coverage about these cases found that "traditional investigative methods initiated the majority of terrorism cases" and government claims on the usefulness of the programs were "overblown."

Here's the main thrust of the study:

"The controversial bulk collection of American telephone metadata, which includes the telephone numbers that originate and receive calls, as well as the time and date of those calls but not their content, under Section 215 of the USA PATRIOT Act, appears to have played an identifiable role in initiating, at most, 1.8 percent of these cases. NSA programs involving the surveillance of non-U.S. persons outside of the United States under Section 702 of the FISA Amendments Act played a role in 4.4 percent of the terrorism cases we examined, and NSA surveillance under an unidentified authority played a role in 1.3 percent of the cases we examined. Regular FISA warrants not issued in connection with Section 215 or Section 702, which are the traditional means for investigating foreign persons, were used in at least 48 (21 percent) of the cases we looked at, although it's unclear whether these warrants played an initiating role or were used at a later point in the investigation."

Many top Obama administration officials have insisted that these programs have helped identify threats to the United States.

In a press conference in Germany back in June of 2013, Obama said they "know of at least 50 threats that have been averted because of this information, not just in the United States but in some cases threats here in Germany."

In a 2007 court filing, Gen Keith Alexander, the director of the NSA, put it in stark terms saying the metadata collection programs "are among the most important intelligence tools available to the United States for protecting the Homeland from another catastrophic attack."

"Turning to the efficacy prong, the Government does not cite a single instance in which analysis of the NSA's bulk metadata collection actually stopped an imminent attack, or otherwise aided the Government in achieving any objective that was time- sensitive in nature," the judge wrote in a scathing opinion.

It's worth noting that in separate cases, the government has also argued that it can't talk about the program's success because it risks revealing sensitive sources and methods.

We'll leave you with a chart that breaks down the methods that initiated the 225 terrorism cases that the New America Foundation reviewed: 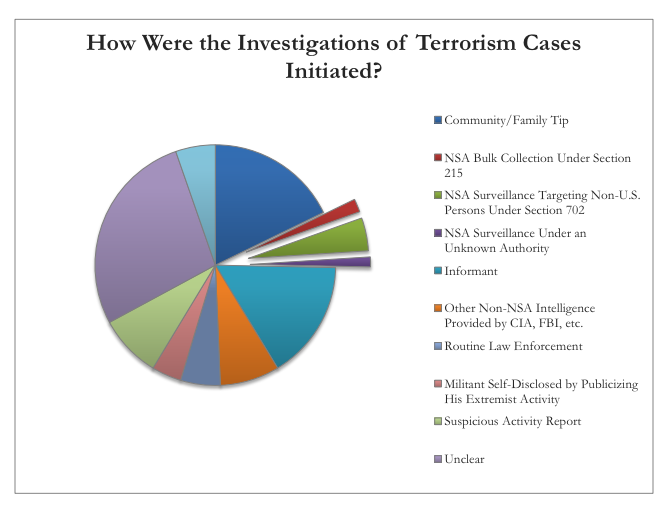 A graph from a study about the efficacy of NSA programs. New America Foundation hide caption