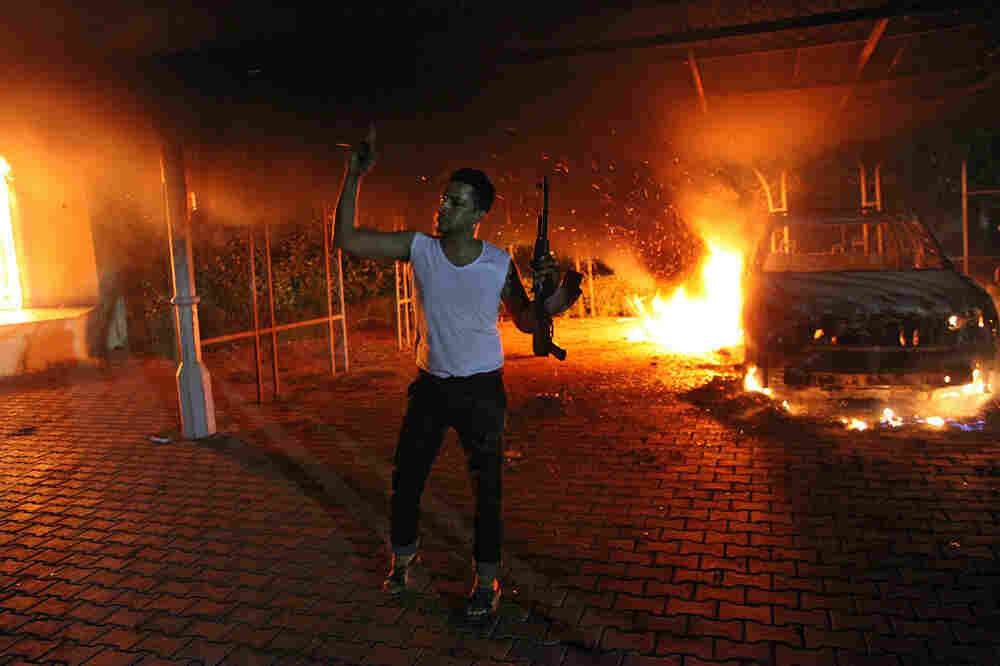 An armed man waves his arms as buildings and cars are engulfed in flames after being set on fire inside the U.S. Consulate compound in Benghazi late on Sept. 11, 2012. AFP/Getty Images hide caption 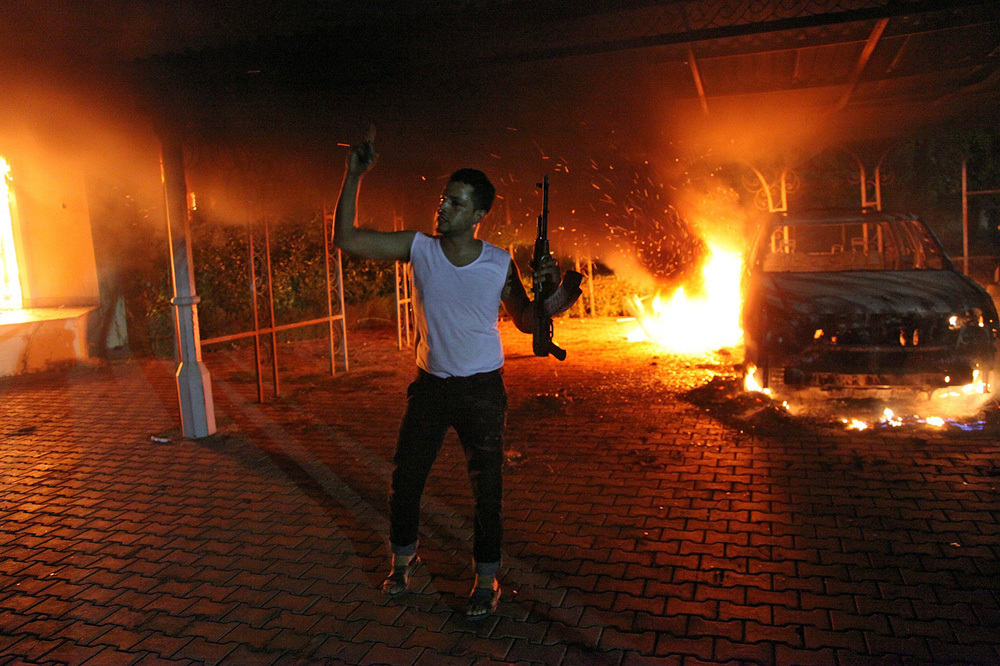 An armed man waves his arms as buildings and cars are engulfed in flames after being set on fire inside the U.S. Consulate compound in Benghazi late on Sept. 11, 2012.

In a report signed off on by Democrats and Republicans, the Senate Intelligence Committee on Wednesday said the Sept. 11, 2012, attacks on U.S. diplomatic facilities in Benghazi, Libya, "were likely preventable."

The panel finds fault with both the State Department and U.S. intelligence agencies for not taking steps beforehand to boost security.

Ambassador Chris Stevens and three other Americans were killed in the attacks.

The committee's report also takes issue with lawmakers who have been using the Obama administration's initial statements about the attacks to make the case that the White House tried to downplay whether they were the work of terrorists.

"Perhaps no issue related to Benghazi has been as mischaracterized as the unclassified talking points prepared by the Central Intelligence Agency" in the days immediately after the attacks, the committee writes. "The majority [of senators on the committee] believes that the CIA talking points were flawed but --as discussed in the report — painted a mostly accurate picture" of what was known at the time.

"It is important to reiterate that the reference to 'al-Qa'ida' included in early drafts of the talking points was removed by CIA staff, not by the White House or the FBI, as was incorrectly alleged by some members of Congress and the press," the committee says.

Rep. Darrell Issa, R-Calif., is among those in Congress who have been leading critics of the Obama administration's actions and statements in the days after the attack. Issa is chairman of the House Committee on Oversight and Government Reform.

On the issue of the role al-Qaida operatives played in the Benghazi attacks, the committee says that "individuals affiliated with terrorist groups" linked to that network "participated." But, the report adds that "it remains unclear if any group or person exercised overall command and control of the attacks or whether extremist group leaders directed their members to participate."

That conclusion puts the committee at least somewhat at odds with a New York Times report that concluded there is:

"No evidence that Al Qaeda or other international terrorist groups had any role in the assault. The attack was led, instead, by fighters who had benefited directly from NATO's extensive air power and logistics support during the uprising against Colonel Qaddafi. And contrary to claims by some members of Congress, it was fueled in large part by anger at an American-made video denigrating Islam."

The committee's report is in agreement, though, with an independent panel's conclusion in late 2012 that the State Department had not provided adequate security for its personnel in Benghazi. According to the committee:

"The State Departmegt should have increased its security posture more significantly in Benghazi based on the deteriorating security sltuation on the ground and [intelligence community] threat reporting on the prior attacks against westerners in Benghazi."