Accessibility links
Japanese Soldier Who Fought On For 29 Years After WWII Dies : The Two-Way For nearly three decades, until 1974, Lt. Hiroo Onoda lived in a Philippine jungle. During those years he continued to battle with villagers. As many as 30 people were killed. It wasn't until his former commander ordered Onoda to lay down his arms that he surrendered. Onoda died Thursday. He was 91.

Japanese Soldier Who Fought On For 29 Years After WWII Dies

Japanese Soldier Who Fought On For 29 Years After WWII Dies 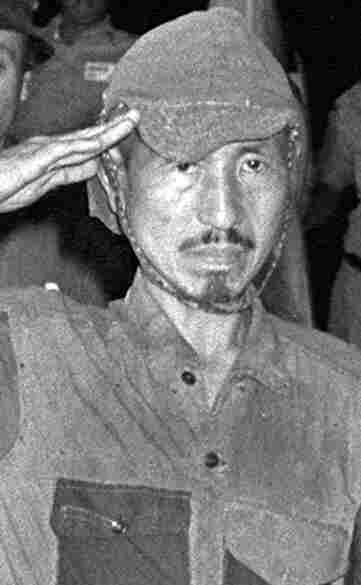 Hiroo Onoda, who wouldn't surrender for nearly three decades and continued to battle with villagers in the Philippines, in March 1974 after he was convinced to give up. Kyodo /Landov hide caption

Hiroo Onoda, a Japanese intelligence officer who for 29 years after the end of World War II continued to hide, fight and kill in the jungles of the Philippines because he did not believe the war was over, has died.

Japan's Asahi Shimbun says Onoda died Thursday in a Tokyo hospital where he was being treated for pneumonia. He was 91. The newspaper sums up the story of Onoda's post-war years this way:

"[Onoda] He was deployed to Lubang island in the Philippines to fight the Allied forces. In 1945, Onoda came across pamphlets dropped on the island by the U.S. military that said the war had ended. ... He thought it was a trick by the United States. He continued using his guerrilla tactics in the belief that the war was still not over.

"In 1974, Norio Suzuki, an adventurer who traveled extensively, encountered Onoda on the island. Suzuki explained that the war was long over, but Onoda responded: 'I will not quit fighting unless there is an order that relieves me of my duty.'

"Onoda returned to Japan in March 1974 after his wartime commander landed on the island and ordered Onoda to lay down his arms."

The BBC writes that Onoda "was greeted as a hero on his return to Japan." He's thought to have been among the last Japanese soldiers from World War II to surrender. The BBC says that:

"Three other soldiers were with him at the end of the war. One emerged from the jungle in 1950 and the other two died, one in a 1972 clash with local troops. ...

"Private Teruo Nakamura, a soldier from Taiwan who served in the Japanese army, was found growing crops alone on the Indonesian island of Morotai in December 1974. Mr Nakamura was repatriated to Taiwan where he died in 1979."

As for why he refused to give up for so long, Onoda once had this to say: "I am very competitive."

During the nearly 30 years Onoda spent on the island, The New York Times says, he and the three others who were with him for some or much of that time "evaded American and Filipino search parties and attacked islanders they took to be enemy guerrillas; about 30 inhabitants were killed in skirmishes with the Japanese over the years."

Once he was persuaded to give up, Onoda was taken to Manila. "Wearing his tattered uniform, [he] presented his sword to President Marcos, who pardoned him for crimes committed while he thought he was at war," the Times says.

Onoda spent some of his later years in Brazil, managing a ranch. In 1980, the Asahi Shimbun says, he "learned that a youth studying to enter university murdered his parents with a baseball bat in Kanagawa Prefecture. Onoda decided to return to Japan to teach children how to become strong enough to overcome their difficulties."