Accessibility links
Gen. Dempsey: Better To Get Others To Solve Their Own Problems : The Two-Way The chairman of the Joint Chiefs of Staff talks with NPR about why it's often better to advise and assist than to get involved militarily. And he looks at the Pentagon's looming budget crisis. 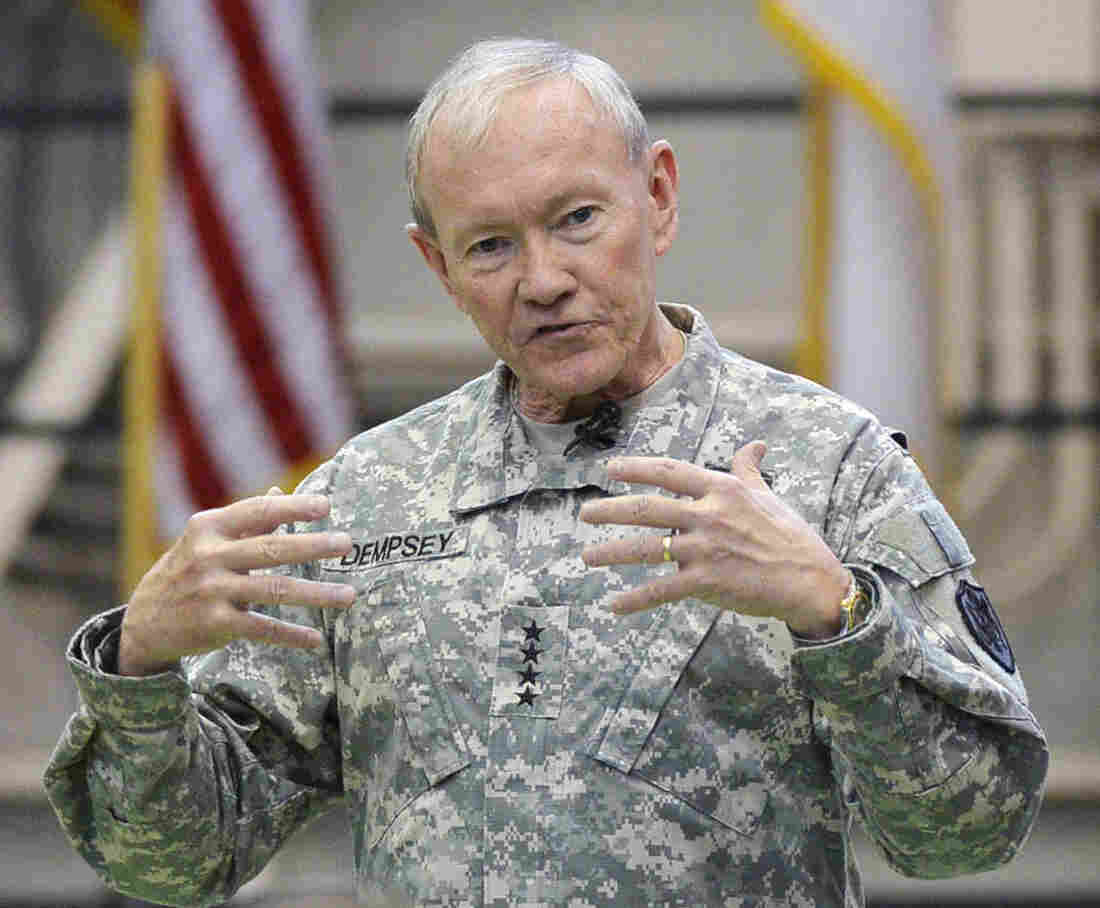 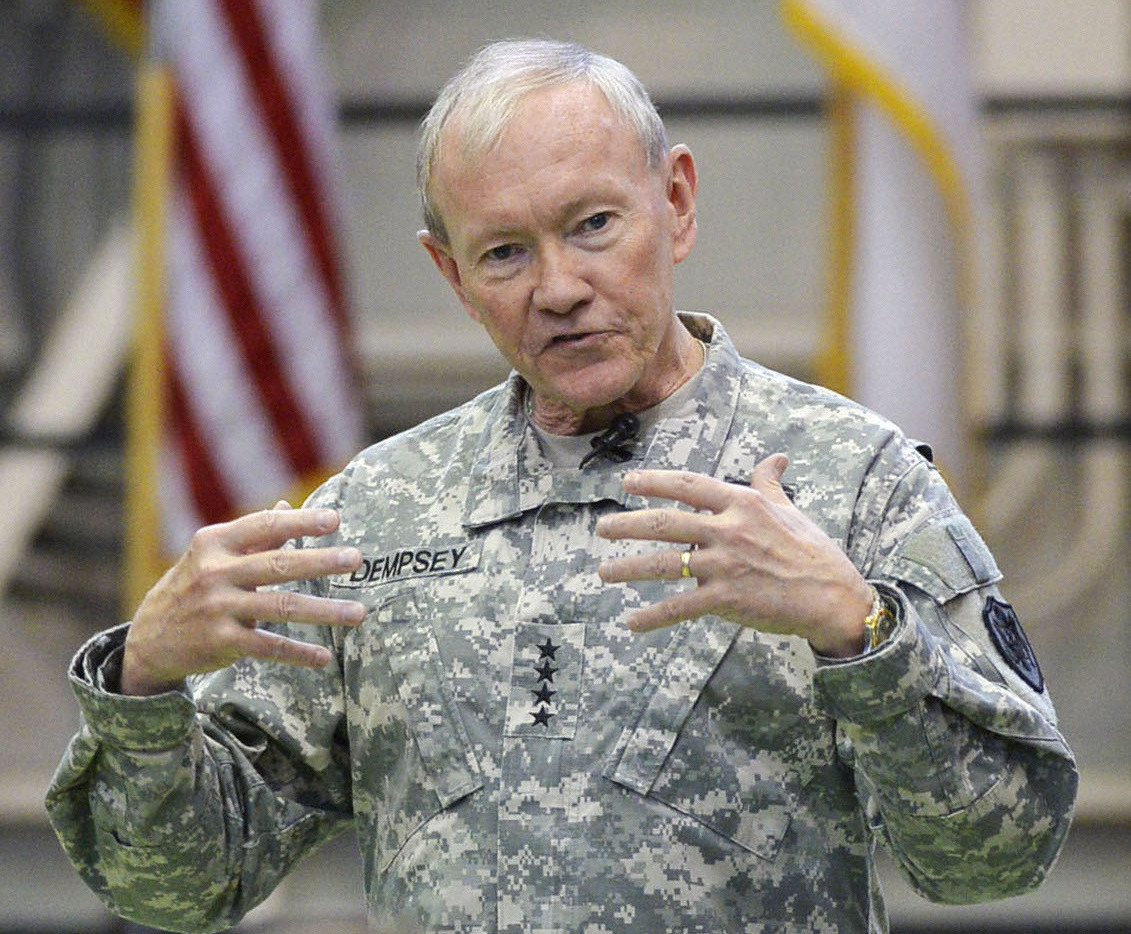 Dempsey, as Tom reported, says the U.S. public, and even its leaders, know little about how military power can be used. The disconnect is most glaring when comes to this: What can the U.S. military achieve in places like Iraq, Afghanistan or Syria?

Earlier this week, Tom also broke some news out of the interview: Gen. Dempsey Disputes Gates' Characterization Of Obama.

Tom's passes along some more of what Dempsey had to say.

On The Situation In Syria And Empowering The Opposition

Tom Bowman: "You have said if Assad fails to come to Geneva with an intent to seek a political settlement, 'then I think like-minded nations might have the opportunity to contribute in different ways if we're asked to.' Returning to training again, arming the rebels? What are those different ways."

Dempsey: "Well, at some point I would then be asked for a menu of possibilities. And that menu will be brought, and include both direct action but most importantly in my view, things we could do to empower them. And our regional partners — the Jordanians, the Qataris ... the Saudis, those who might be interested in contributing more overtly to a positive outcome. ..."

Bowman: "But your favorite option out of that might be to train, arm the rebels, let them do the job?

On A "Good Idea" About The Situation In Iraq

Dempsey: "Well, here's what is a good idea. First of all, seeing this issue not through a soda straw. We have a tendency to do that. We look at Syria as if it exists as an isolated problem. We look at Iraq now as though it's an isolated problem. I think a regional approach — now, we are doing that mil to mil. Militarily, [Gen.] Lloyd Austin at CENTCOM and as he asks me, I'll contribute. But we come together as military leaders of the region, and we look to ways that we might contribute. Planning, logistics ... expertise. The things that we tend to do better than anyone else. But none of them have asked, nor have we offered, for direct military involvement.

Gen. Martin Dempsey on the situation in Iraq

"Because — I actually believe — that the way the problems ... because of the underlying religious issues and extremist issues, I think that the degree to which we can get them to solve these problems with our support but not our direct action is far more likely to produce a positive outcome than if we take control and own this problem ourselves."

Dempsey: "It won't become a crisis until the early part of the next decade, but it will become a crisis. At the current rate of growth, the amount of money that the [Defense} department has to spend to sustain the all-volunteer force could place us out of balance, meaning we won't have enough money to put into training, equipping, and readiness because we will be over-invested in manpower costs. That's if we maintain the current rate of growth.

"So what we're recommending — the Joint Chiefs of Staff and I — is to slow the growth. We think we should do it now, not just defer the problem to our successors. ...

Bowman: "In general, are we talking about limiting Cost of Living Adjustments (COLAs), asking for more co-pays, higher deductibles?"

Dempsey: "The package that we've proposed has not yet been approved by the secretary of defense and the president, so I really can't speak to specifics."

Bowman: "But clearly those are the things you're looking at."

Gen. Martin Dempsey on his 'sacred obligation' to the troops

On His "Sacred Obligation" To The Troops

Dempsey: "I have one sacred obligation to the young men and women who serve. And only one. ... If I ask them on behalf of the president to go to places like Afghanistan or some other conflict, they must be the best trained, best equipped and best led force on the planet. I don't want to win 5 to 4, I want to win 50 to nothing.

"To do that we've go to make the appropriate investments in training, readiness, leader development, modernization and manpower. But I can't have the manpower account so out of proportion that it precludes me from making sure that if they go into harm's way they're ready to go."