Accessibility links
Big Bike-Sharing Supplier's Bankruptcy Doesn't Doom U.S. Programs : The Two-Way The Public Bike System Company is the main supplier for bike-sharing systems around the country, from San Francisco to New York City, and it declared bankruptcy Monday. But experts say this isn't a big bump in the road — and in fact, bike-sharing is here to stay. 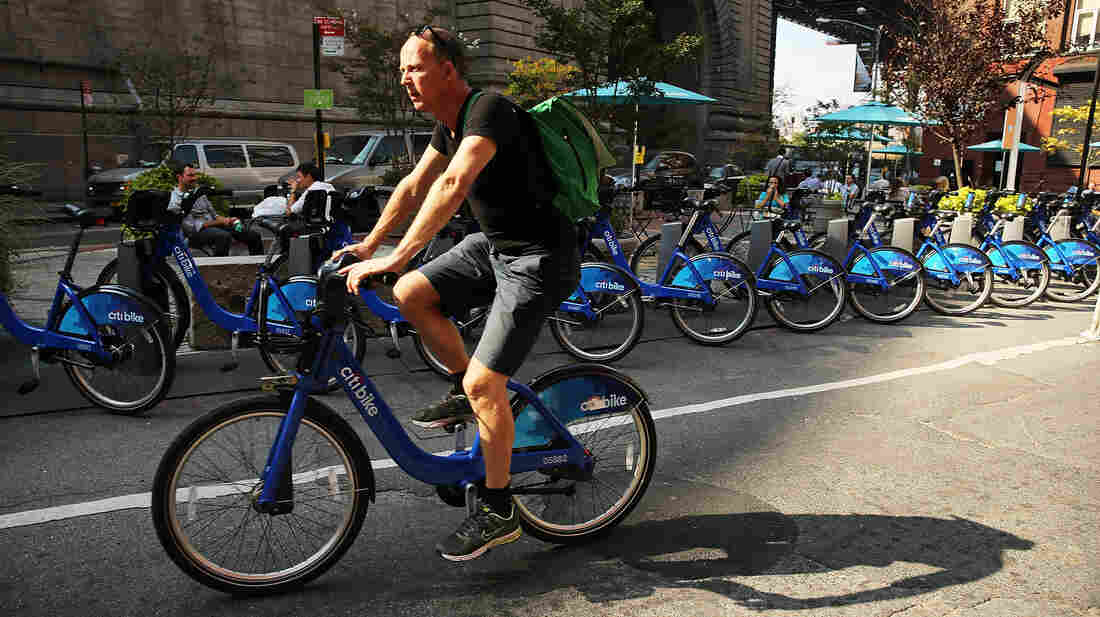 A major supplier to bike-sharing companies declared for bankruptcy this week — but experts say they still see the services spreading. Here, a man rides a Citibike through the Dumbo district of Brooklyn. Spencer Platt/Getty Images hide caption 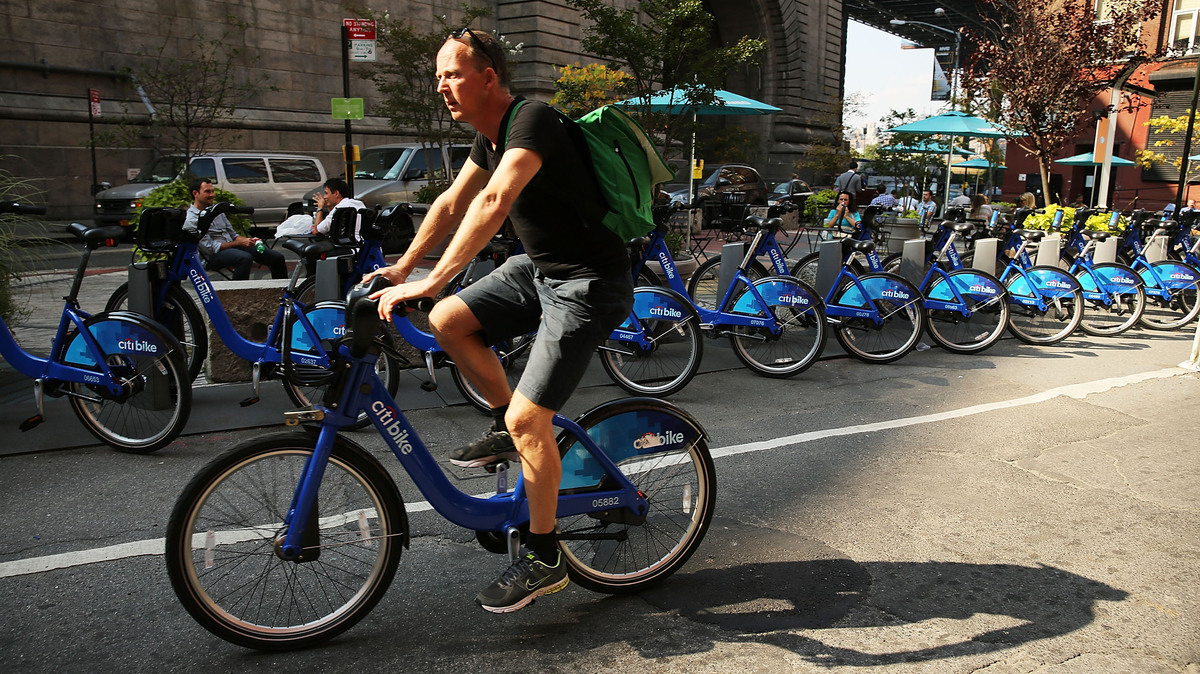 A major supplier to bike-sharing companies declared for bankruptcy this week — but experts say they still see the services spreading. Here, a man rides a Citibike through the Dumbo district of Brooklyn.

The Canadian company that is the main equipment and technology suppliers for bike-sharing systems across the U.S. has filed for bankruptcy.

Public Bike System Co., (PBSC) which owns the widely used BIXI bike-sharing system, announced the bankruptcy Monday, citing almost $50 million in debt, as first reported by the Montreal Gazette. Its bikes and technology are used in 16 areas around the world, including major cities such as Chicago, New York, London, Montreal, and Washington, D.C.

After the bankruptcy was announced, Alta, a company that operates several BIXI bike-share systems in the U.S., said in a statement that its customers won't have their service interrupted. Alta says it plans to expand current systems and launch new ones this year.

"I don't see this as being a very big bump in the road for bike share," Blue says. "I just see this as a chance for cities to learn — we can't run our transportation systems like a business, it doesn't really work that way because then we run the risk of not serving the people that need to be served."

PBSC attributes the bankruptcy partly to cities that have not paid it, including around $5.1 million from New York and Chicago. It is also in a lawsuit with the company that makes its bike-share analysis software.

The bankruptcy doesn't surprise John Pucher, who studies bicycling as a professor of urban planning at Rutgers University and who recently published a book about the cycling boom in cities.

"Looking at the operating data of the cost and revenues of the [bike-sharing] systems that I've seen, they vary from one system to another, but I'm just not convinced overall that it's a profitable venture," Pucher says. "It's not a big money maker the way they've set it up."

He points out that although some systems have come close to breaking even, whatever money the bike-sharing systems get from customers will not cover the cost of installing the system and getting bikes in the first place.

But Pucher says this doesn't mean the bike-share system doesn't work. In fact, it's booming.

Bike-sharing has more than doubled in the U.S. last year, bringing the combined fleet to more than 18,000 nationwide between 34 programs , according to the Earth Policy Institute, a DC-based environmental nonprofit. The leading system is in New York, with around 6,000 bicycles and 2 million trips within three months of the program starting last May.

The U.S. is just catching up to Europe and Asia, where there are bike-sharing programs in more than 500 cities in 51 countries. China has two-thirds of the global bike-share fleet, with Wuhan and Hangzhou being the two largest programs worldwide.

For example, the bike-share system in Arlington County, Va., recovered around 74 percent of its operating cost last year, according to a report from the county. Compare that to U.S. transit agencies, where the money from passenger fares account for less than 40 percent of all operating funds, according to 2011 figures from the latest issue of the American Public Transportation Fact Book. The rest comes from government funding.

Pucher says bike-sharing is far more profitable in this light, and works well with other public transit systems. He points out people often use bike-sharing systems to get between subway stations or bus stops; the systems also provide benefits such as reducing air pollution and congestion on roads.

Author Elly Blue agrees, and says that compared to the money spent on repairing highways, or the $50 million spent on uniforms from the Transportation Security Administration, bike-sharing is a good investment.

"I really do see bicycling as the future of civic investment," she says, "not because it's the right thing to do, or a fun and healthy thing to do, even though it is, but because it's just the only thing that economically makes sense."