Accessibility links
Buying A Detroit House For $500, And Then Explaining Why : The Two-Way Drew Philip made waves this month by explaining to the Internet why he bought a house in struggling Detroit for $500. In his much-discussed story for Buzzfeed, Philip said that he is part of "another Detroit," one where people are working to help each other and save their city.

Buying A Detroit House For $500, And Then Explaining Why

Buying A Detroit House For $500, And Then Explaining Why 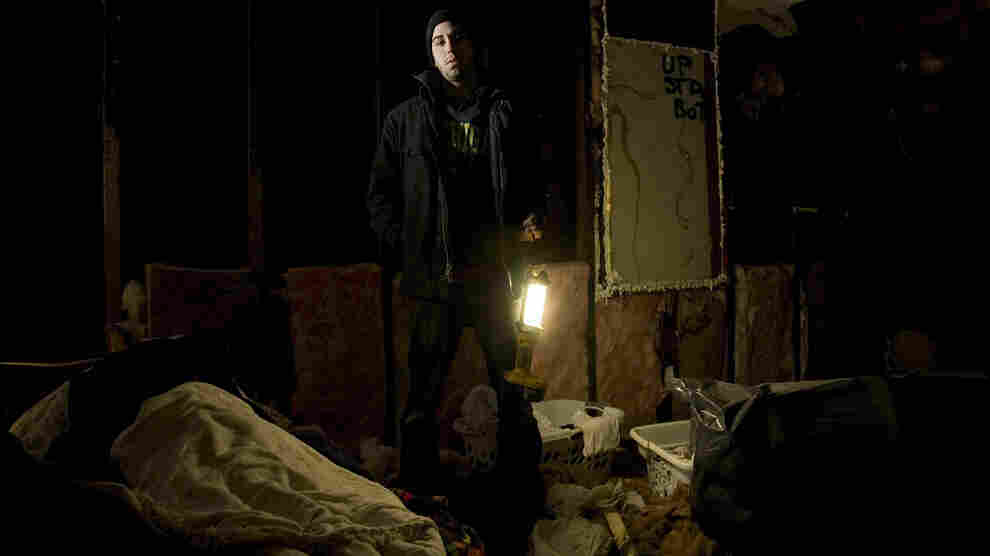 During the early days of his renovation, Detroit homeowner Drew Philip posed for this photo in his house. Courtesy of Garrett MacLean hide caption 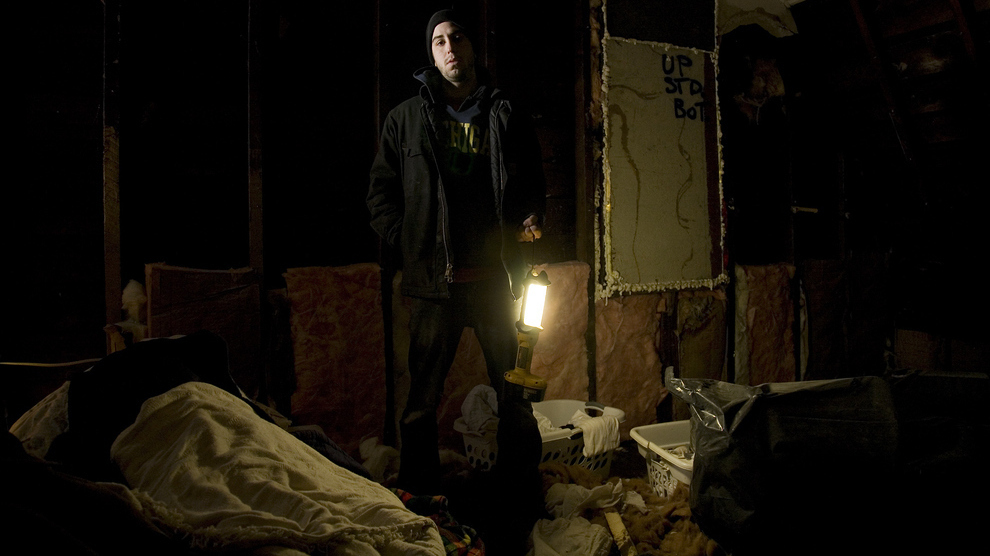 During the early days of his renovation, Detroit homeowner Drew Philip posed for this photo in his house.

Drew Philp made waves this month by explaining to the Internet why he bought a house in struggling Detroit for $500. In his much-discussed story for Buzzfeed, Philp said that he is part of "another Detroit," one where people are working to help each other and save their city.

"The reason kind of my neighbors at first thought I was crazy was because I was the only one moving in," Philp tells guest host Celeste Headlee on Tuesday's Tell Me More. "Detroit is still hemorrhaging people, black and white. We're starting to talk about middle-class flight now instead of white flight."

As Philp tells Celeste, he bought the house shortly after graduating from the University of Michigan. Instead of pursuing job leads elsewhere, he says, "I wanted to use it here to help my family and my people in my own state."

They also discussed how Philp went from being a "token white" employee at an black-owned construction company to spreading the word that Detroit can be saved – but it should be done in the right way. 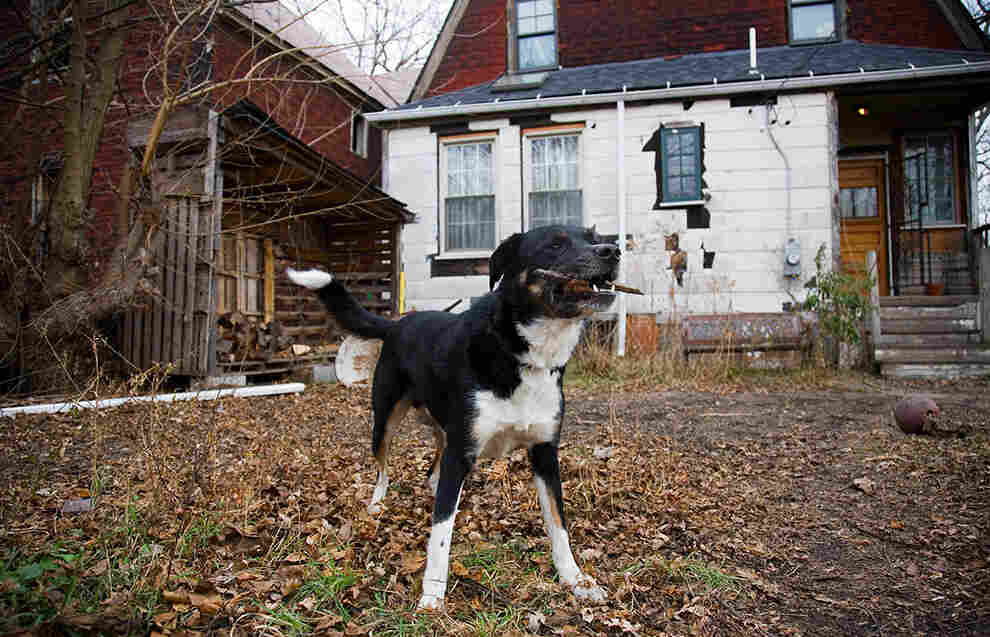 Philip's dog, Gratiot — a name he shares with a county and other Michigan landmarks — in his back yard. Courtesy of Garrett MacLean hide caption 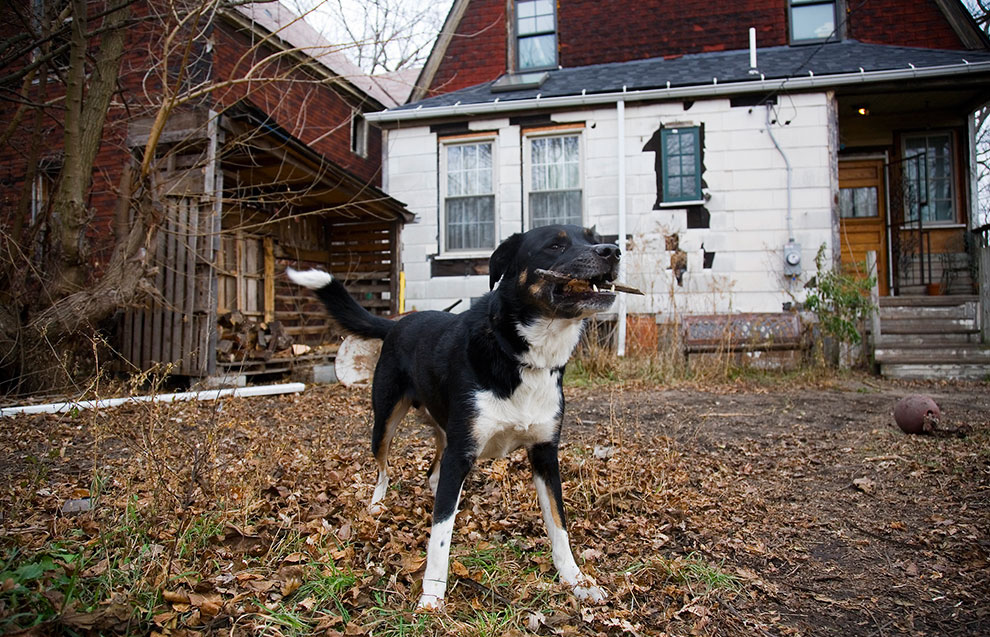 Philip's dog, Gratiot — a name he shares with a county and other Michigan landmarks — in his back yard.

You can hear their full interview at the Tell Me More page. Here are some highlights:

Here's how Philp describes the house:

"It certainly was a disaster. It had good bones. I thought it was pretty. I also liked the neighborhood. I had been living in the neighborhood Poletown in Detroit for a couple years. And this house had some space around it so I could, you know, let my dog run and build a shed and those things that I kind of would need to kind of do this home-steading thing. But the neighbors were great. The neighbors were especially kind, friendly. They had these beautiful nice well-kept homes."

"....There was a better part of a Dodge Caravan inside that had been - it looked like it had been cut apart with a Sawzall and deposited in my house. It took me quite a long time to clean the house up."

And here's how he describes fitting in with his neighbors:

"But, you know, eventually I think people saw me cutting my grass and outside banging on my house. And it - you know, it got to the point where people would bring me lemonade, or one of my neighbors last summer cut my lawn and refused payment, when my lawn mower was broken."

Celeste and Philp discussed gentrification, and the idea of a "white savior that comes in and, idealistically, thinks that he or she is going to save the brown people of this urban neighborhood," as Celeste says.

She asked, "Were you ever concerned... that people might question your motives?"

"Oh, absolutely. I mean, I think that people are totally right to question my motives. I question my own motives. And I'm not 100 percent sure what I'm doing is right or the best thing for the city and the people. You know, it's such a difficult, hard issue. And, you know, I'm not sure I've solved all those problems. I certainly don't have all those answers. So I can't say that, you know, 100 percent what I'm doing is great. That's something that weighs on me continually."

By "what I'm doing," Philp says, he's thinking of both his house rehab and his writing about it. And he's also wants to inform other young white people who might consider moving to Detroit. The key, he says, is respect.

"One of the things I was thinking about in terms of the story is that, you know, there are a lot of these, like, white savior narratives," Philp says.

"I hope I'm trying to kind of break that mold a little bit and say, look, there's a long history here with people who have been here for a long time who are very, very intelligent and very good at doing what they're doing.