Accessibility links
Think You Know Richard Sherman After His 'Rant'? Maybe Not : The Two-Way The Seattle Seahawks player's post-game interview set off another national discussion about race because of the way many reacted to it with not-so-veiled slurs. He tells CNN that it's those who posted racial comments about him afterward who "showed their true character."

Think You Know Richard Sherman After His 'Rant'? Maybe Not

Think You Know Richard Sherman After His 'Rant'? Maybe Not

Post-game interviews of NFL players are almost always predictable and boring. They go something like this:

Reporter: "Congratulations. How did you guys turn the game around?"

Player: "One play at a time. The team stuck together. We worked hard. The good Lord was with us. The fans were great. Hi, Mom!"

In 20 seconds Sunday night on Fox-TV, Seattle Seahawks cornerback Richard Sherman gave one of the most memorable post-game interviews ever — and not just because he shattered the stereotype about how players behave in that situation.

Sherman's "rant" as it quickly became known, did much more. It ignited another national discussion about race and the way many Americans react to young, strong African-American men who sometimes get loud.

Haven't seen it yet? Fox, which broadcast Sherman's comments to correspondent Erin Andrews, has posted the video here.

We'll also set the scene and do a transcript for those who aren't familiar with what happened:

Sherman had just come off the field after making a game-saving play in the end zone. He tipped a pass meant for San Francisco 49ers receiver Michael Crabtree. That tip and the subsequent interception by one of Sherman's teammates meant Seattle won the game, 23 to 17, and is now headed for the Super Bowl.

Andrews: "The final play, take me through it."

Sherman: "Well, I'm the best corner in the game! When you try me with a sorry receiver like Crabtree, that's the result you gonna get! Don't you ever talk about me!"

Andrews: "Who was talking about you?"

Sherman: "Crabtree! Don't you open your mouth about the best, or I'm gonna shut it for you real quick! LOB!" (That's a reference to the Seattle defense's nickname, "legion of boom.")

Within moments, Twitter was lighting up. Many of the comments were veiled and not-so-veiled racist remarks about the 25-year-old Sherman, a third-year player who graduated from Stanford. He was called a "monkey," which has long been an offensive word hurled at blacks. And he was called a "thug," which in more recent years has been a word aimed at young black men who supposedly embrace the "thuggish" life of some rap stars. Or, as Deadspin says, "thug" is shorthand for "a black guy who makes white folks a little more uncomfortable than they prefer." 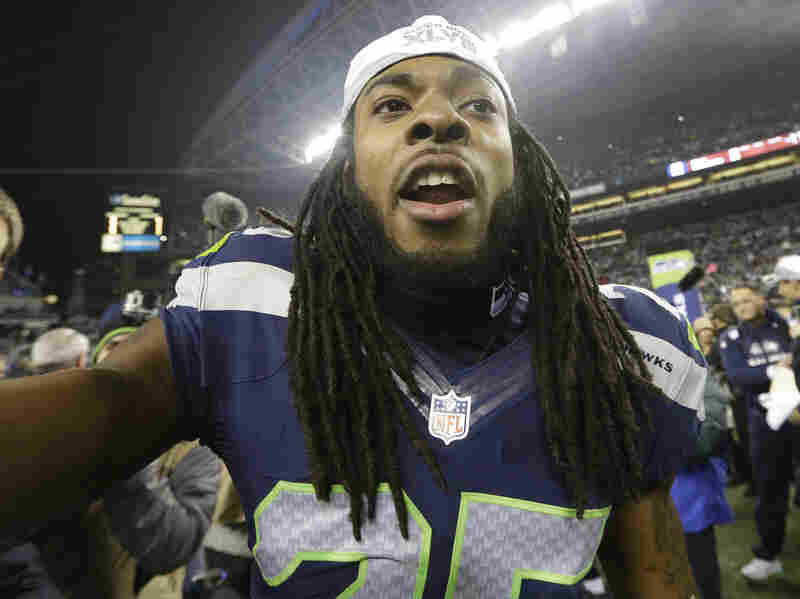 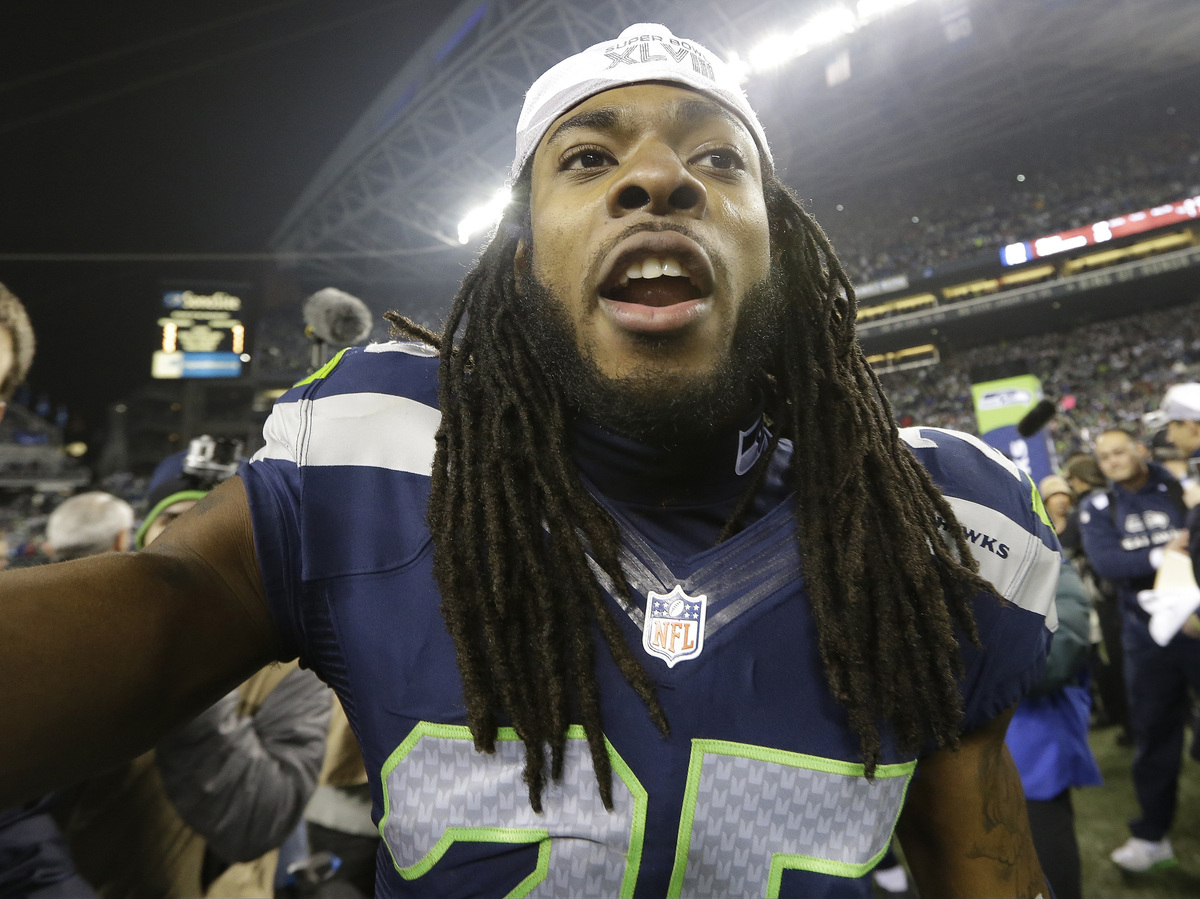 Richard Sherman on the football field. 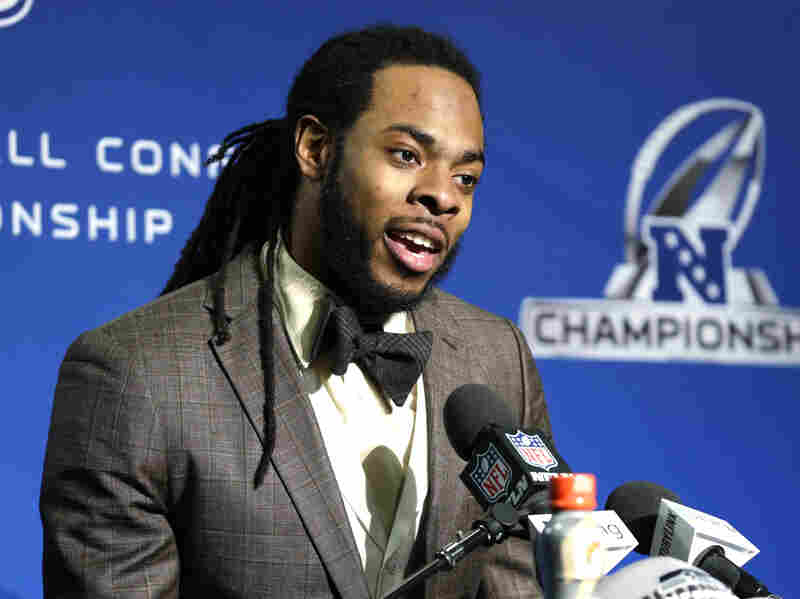 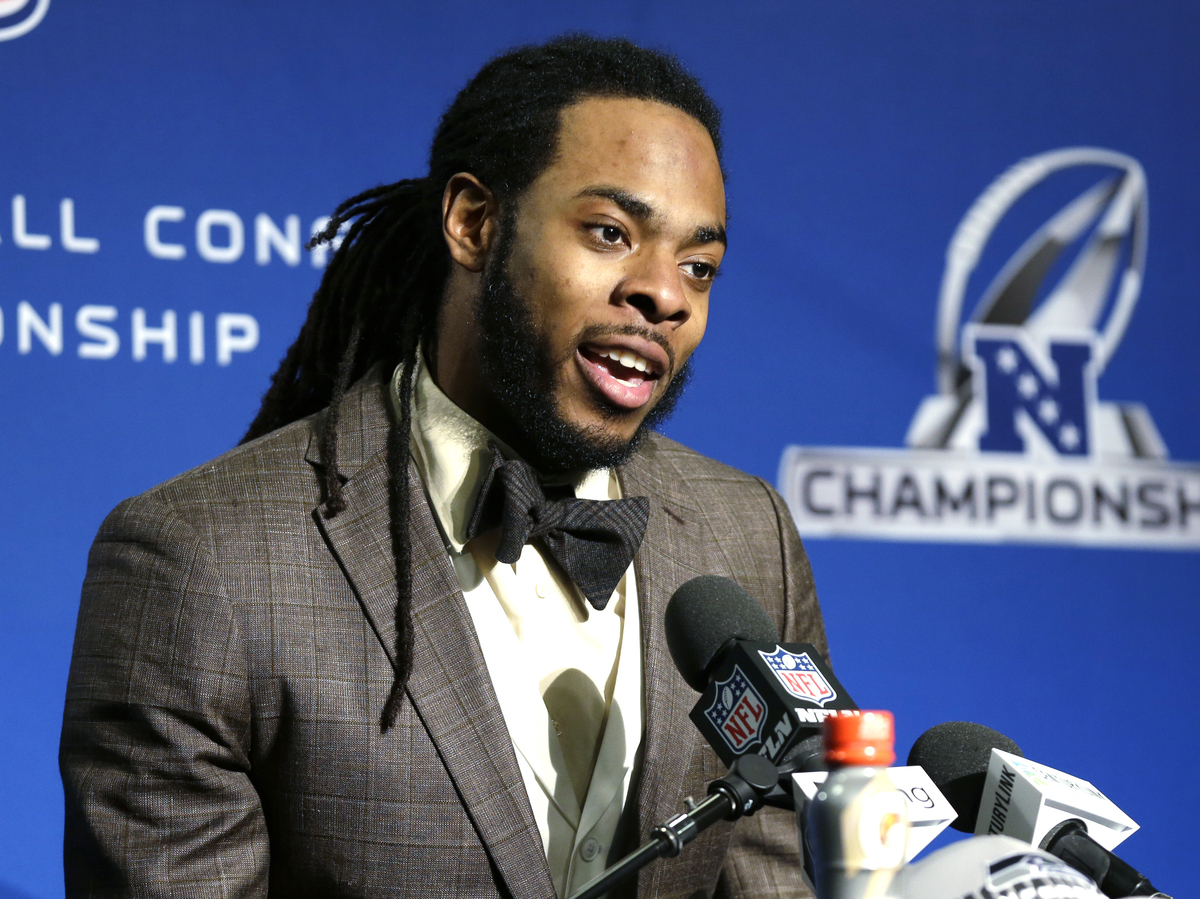 Richard Sherman off the football field.

Now, Sherman has done a lengthy interview with CNN. The network has put some of it online already, and will broadcast more later this week.

"I probably shouldn't have attacked another person," Sherman says of his words about Crabtree. He regrets "the storm afterwards" and the attention it took from "the fantastic performances from my teammates."

Then he goes on to talk about the difference between who he is on the field and off the field.

"On the field, where we're playing a very barbaric sport, you can do as you please," he says. "It takes a different kind of person to be able to turn that switch on and off and be able to step into the ring or step on the field and be the intense, incredible, focused and kind of ... I guess angry human being that you have to be to be successful in those ... atmospheres. ...

As for the racist reactions to his comments, Sherman says, "it was really mind-boggling. It was kind of sad. ... For the people who did react that way and throw the racial slurs and things like that out there, it was really sad. ... I'm not out there beating on people or committing crimes or getting arrested or doing anything. I'm playing a football game at a high level. I got excited. ...

"What I did was within the lines of a football field. What they [those who posted racist comments] did was in actual reality. They showed their true character. Those were real comments. ... They had time to think about it. They were sitting at a computer and they expressed themselves in a true way.

"I thought society had moved past that."

That's a quite different side of Sherman than he showed Sunday night. It's also a side of him that:

-- NFL Films, which obviously has a reason to present players at their best, explores in this online video: "The trash-talking cornerback."

-- Beats by Dre, which also obviously has a point of view because Sherman is helping promote its headphones, digs into it in this "director's cut" version of a seemingly prescient ad he stars in.

Now, after posting all this, we return to the question in our headline and tweak it just a bit to ask: If you had one opinion of Sherman right after the game, is it different now?