Accessibility links
VIDEO: Congressman Threatens To Throw Reporter Off Balcony : The Two-Way Rep. Michael Grimm, R-N.Y., didn't like a reporter's question. With the camera still rolling, he said he would throw the journalist "off this [expletive] balcony." Also, said Grimm, "I'll break you in half."

"@repmichaelgrimm called to apologize. He said he 'overreacted.' I accepted his apology," tweets NY1 reporter Michael Scotto, who was the object of Rep. Michael Grimm's anger Tuesday night.

As we reported earlier, the Republican congressman from New York threatened Scotto — saying he would "throw you off this f - - - - -g balcony" — if the reporter ever again tried to ask an "off-topic" question that the lawmaker doesn't want to address.

The incident was caught on camera, and the video has quickly spread.

The post-State of the Union reviews of President Obama's address and the GOP responses have been hijacked a bit this morning by reports about Rep. Michael Grimm's angry response last night to a reporter's question. 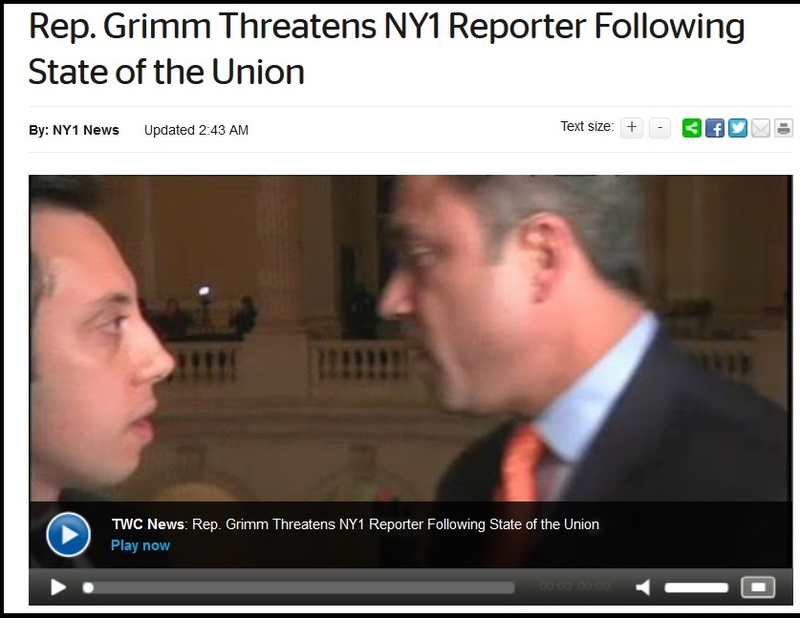 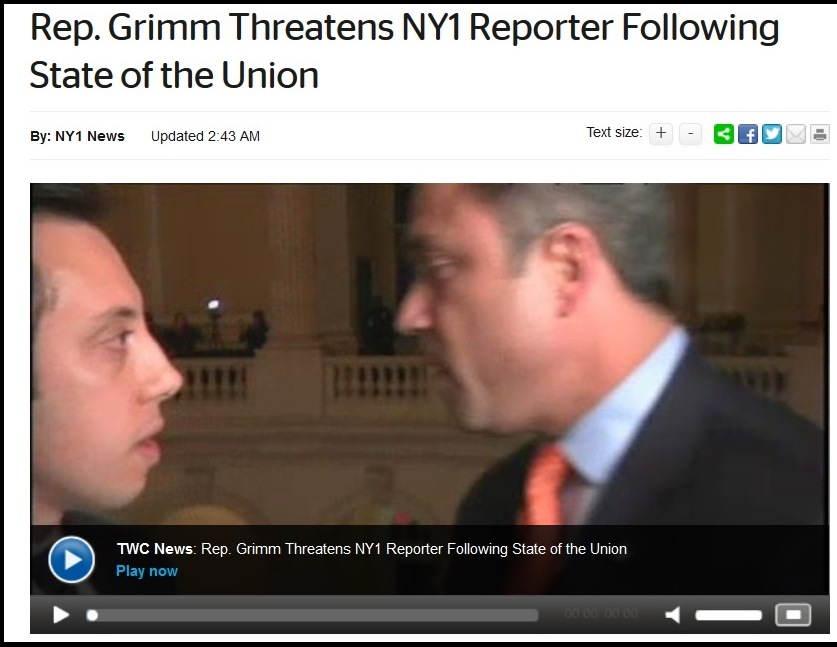 If you haven't seen the video by now, it's on the website of NY1.com, which has also posted a transcript of the exchange between its reporter — Michael Scotto — and the Republican congressman from Staten Island. We'll embed the version that CNN posted Wednesday morning with its report about the incident.

After talking to the congressman about the president's address, Scotto started to ask another question. Viewers wouldn't have known what the subject was because Grimm cut the reporter off. What Scotto wanted to ask about, as the congressman knew, was an ongoing investigation into possible fundraising violations by a donor to Grimm's 2010 campaign.

"I'm not speaking about anything's that off-topic — this is only about the president," Grimm told Scotto before walking away.

Then, while the camera was still recording, Grimm returned to say:

Scotto asked: "Why? Why? This is a valid question."

Later, Grimm issued a statement that says, in part, "I was extremely annoyed because I was doing NY1 a favor by rushing to do their interview first in lieu of several other requests." He also accused the reporter of "taking a disrespectful and cheap shot at the end of the interview."

NY1's political director, Bob Hardt, says in a statement that the news outlet is "certainly alarmed and disappointed by the behavior of Representative Grimm and demands a full apology from him. This behavior is unacceptable."

Scotto tells CNN that "I'm a New York City reporter. I'm used to pushback, but I never encountered anything like that." He also says "I'm not taking it personal."

"The FBI earlier this month charged 47-year-old Diana Durand with using straw donors to exceed the maximum allowable contribution to Grimm's campaign committee. After contributing $4,800, the maximum amount allowed under federal law, Durand allegedly offered to reimburse four friends if they contributed to the campaign.

"Grimm is not charged with any wrongdoing in connection with the probe."

Grimm was first elected to Congress in 2010. He's a former special agent with the FBI and the founder of a health food restaurant in Manhattan. Grimm turns 44 next month.