Accessibility links
Who 'Won' The Creation Vs. Evolution Debate? : The Two-Way Days after a wide-ranging debate on creationism and evolution between Bill Nye and Ken Ham, the topic is driving an online conversation about points raised in the debate. Themes of belief and literalism, logic and faith — and, for some, relevance — are being debated online. 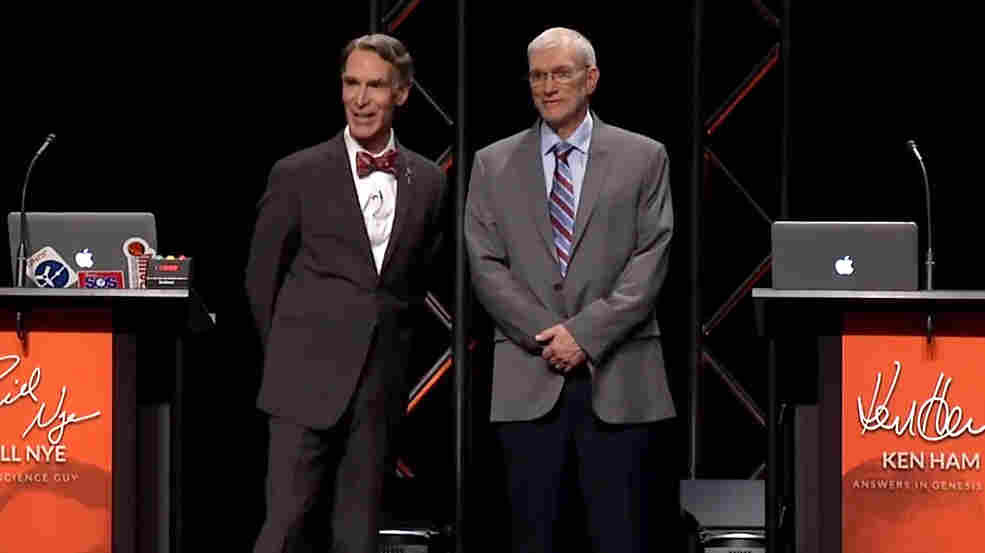 Bill Nye (left) and Ken Ham debated whether creation is a viable model of origins in the modern scientific era during a lengthy debate Tuesday. The points they raised have fueled an online conversation that continues. YouTube hide caption 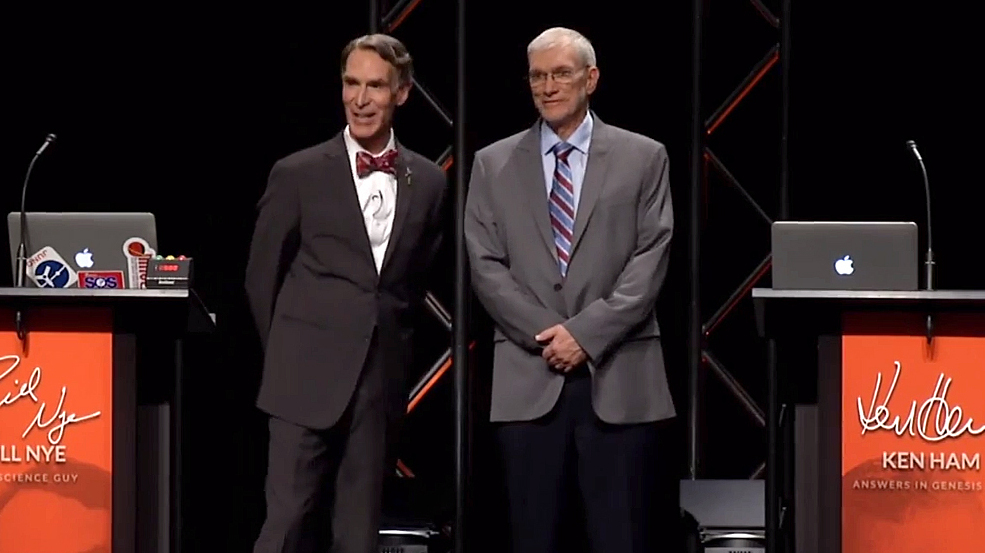 Bill Nye (left) and Ken Ham debated whether creation is a viable model of origins in the modern scientific era during a lengthy debate Tuesday. The points they raised have fueled an online conversation that continues.

Days after a wide-ranging debate on creationism and evolution between Bill Nye and Ken Ham, the event is driving an online conversation. Themes of belief and literalism, logic and faith — and, for some, relevance — are being aired and disputed. And some wonder what the debate accomplished.

The video of the more than two-hour debate, in which Nye and Ham presented their views on how the Earth and its surroundings were created, has been viewed more than 830,000 times on YouTube. At one point, the live event drew more than 500,000 viewers.

And the interest has persisted. We've sifted through some of the reactions to the debate, along with what people make of the opposing viewpoint. Below is a sampling of what we're seeing:

On our live-blog page for the debate, Richard Arthur came away with the top-rated comment (out of more than 2,000 responses):

"As a Christian I will say this: My faith does not require me to believe in the age of the earth as outlined in the Bible. Christ commanded me to love and that is where all Christians need to focus. Discussing how many fairies can dance on the head of a pin is a distraction."

The top-rated response to Arthur showed signs of common ground and tolerance:

"And this atheist respects you for that," said a reader whose user name is rabidchipmnk.

In terms of who "won" the debate, the audience of Britain's Christian Today website says it was Nye, hands down. With 42,567 responses, the site's online poll finds Nye with 92 percent support, compared with 8 percent for Ham. An option for "neither" is not provided in the poll, which is still taking votes.

Christians also took Ham to task in the more than 1,100 comments on Mark's original post on the morning of the debate. Here's the top response, from a reader known as Slicktop Texan:

"[As] a Christian, it's always amazed me how much other people of faith struggle with this. The bible is written in parables. P A R A B L E S. How about this: evolution exists, it's undeniable, plain and simple. How can your faith lead you to believe that God created everything in the universe... but yet, you can't believe that perhaps evolution was how He did it?"

And another comment from a user named NorthernZack asked Ham to be open to several competing theories of creation:

"Why not set up churches to present evidence for both 7-day Creationism and concepts of Theistic Evolution (ala the Church of England, or the Catholic Church, or biologos.org). Millions of Christians believe that God used evolution for creation. Why not let American churchgoing kids hear about multiple Christian perspectives on origins and then decide, instead of insisting they fall lock-step into the interpretation of Genesis that is least consistent with natural evidence."

The performances of Nye and Ham have also been judged, and critiqued. Over at The Daily Beast, Michael Schulson says that Nye's willingness to engage with Ham threatened to reduce " substantive issues to mere spectacle" — even if, as Nye told CNN, his main goal in debating the point was to protect science education in America.

Ham gained publicity and legitimacy, Schulson says, while Nye "spent three-quarters of the debate sounding like a clueless geek, even if his points were scientifically valid."

Here's how Schulson saw the two:

"Ham was at a loss for words only once during the whole debate, when an audience member asked what it would take for him to change his mind. By contrast, Nye seemed most alive when talking about all the things that he couldn't explain."

But Ham has his own critics — among them Pat Robertson, who said Thursday on his show The 700 Club, "Let's be real; let's not make a joke of ourselves."

Robertson went on to say Ham was using a flawed analysis, which he linked to Ireland's Bishop Ussher, reports The Christian Post.

Then Robertson said something that resembled points made by Nye. "Anyone who is in the oil business knows he's drilling down, 2 miles, 3 miles underground, you're coming into all these layers that were laid down by the dinosaurs," Robertson said, according to The Christian Post. "And we have skeletons of dinosaurs that go back like 65 million years. And to say that it all came around 6 thousand years ago is nonsense."

Saying that a cosmic Big Bang doesn't undercut his beliefs, Robertson continued, "I say God did it. God caused all of this. He is the author of all life."

If you're hungry for more discussion about life in the universe, you might want to check out Adam Frank's recent post for NPR's 13.7 Cosmos & Culture blog, titled "Eureka! First Life In The Universe."

"The idea of truly ancient 'first' civilizations is a staple in science fiction (check out the video game Mass Effect for a nice example). But when was the earliest moment in the 13.7 billion-year history of the cosmos when life (as we know it) could have first formed?"

The answer has to do with thoughts sparked by the Cosmic Microwave Background. As Adam says, it's "a bath of radiation left over from just after the Big Bang (it emerges just 300,000 years after the moment of creation, which, in the scheme of things, is the blink of an eye)."