Accessibility links
Job Growth Less Than Expected, But Unemployment Hits 5-Year Low : The Two-Way While the jobless rate edged down to 6.6 percent in January from December's 6.7 percent, only 113,000 jobs were added to payrolls. That's well below what was expected.

Note: This post was updated several times after the jobs report was released at 8:30 a.m. ET. 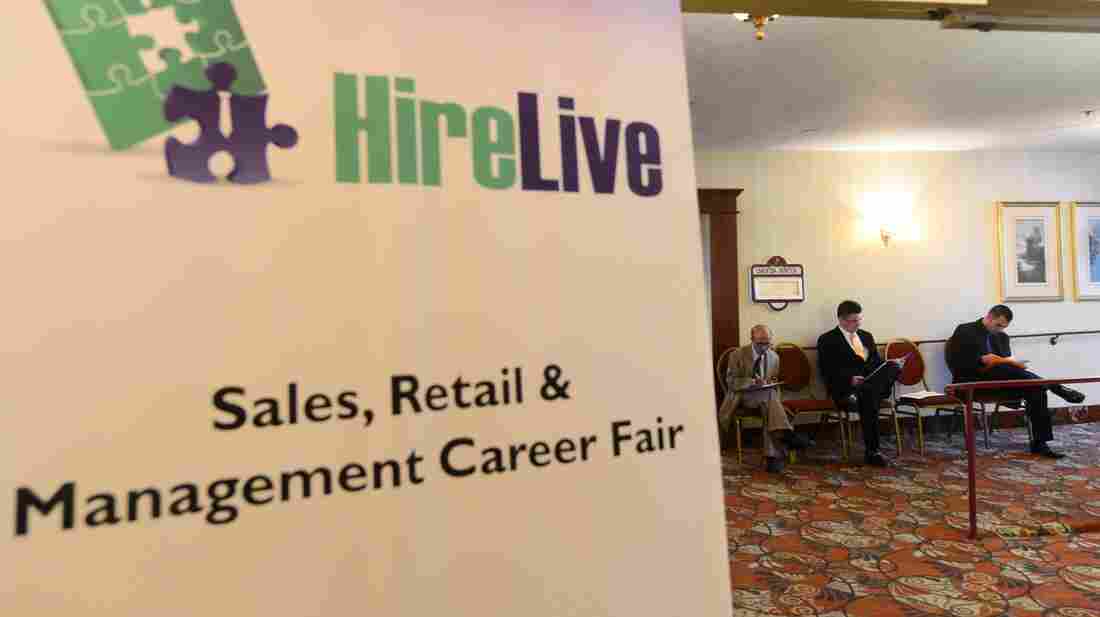 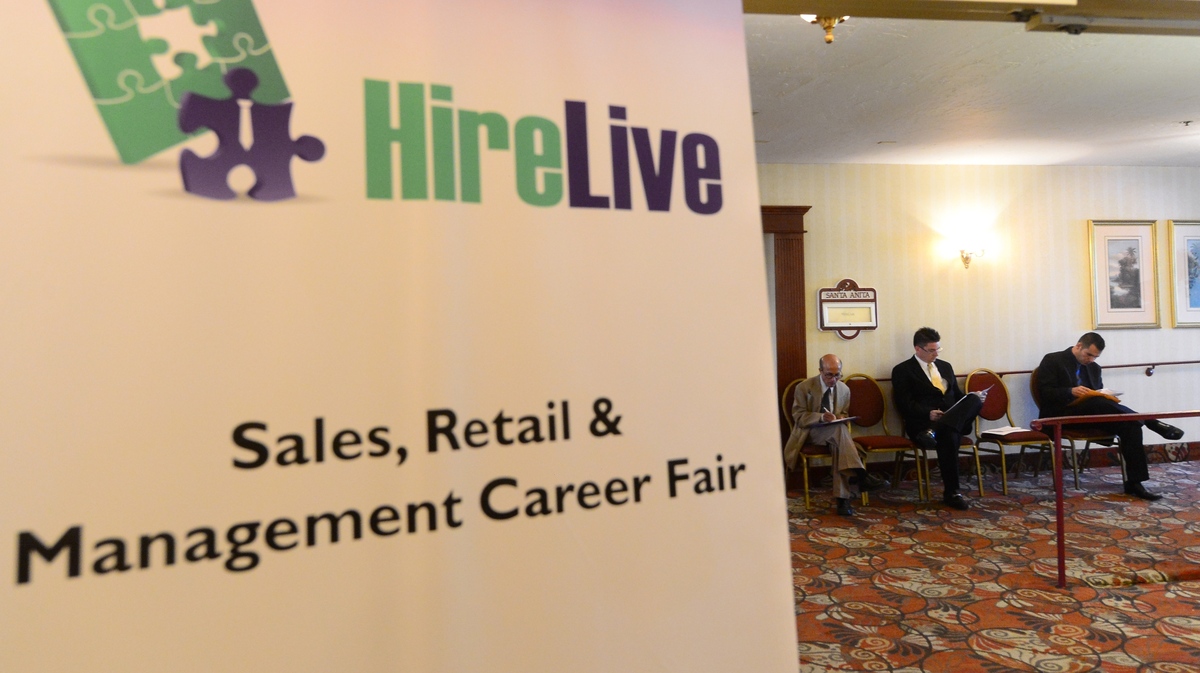 The nation's unemployment rate slipped to 6.6 percent in January from 6.7 percent a month before, but employers added only 113,000 jobs to their payrolls last month, the Bureau of Labor Statistics reported Friday morning.

The jobless rate figure was expected. The job growth number, however, was well below the 185,000 that economists expected.

What's more, BLS said it still believes job growth was even more disappointing in December. When it initially reported that only 74,000 jobs had been added to payrolls that month, it was hoped the figure might later be revised upward. But today's report showed almost no change: BLS now believes 75,000 jobs were added in December.

The news could add to concerns about a slowdown by the economy, and to some investors' worries that the Federal Reserve is moving too quickly to "taper" the amount of stimulus it is giving the economy.

The Dow Jones industrial average and other indices were up slightly after about one hour of trading in New York. Investors may have decided the jobs report isn't so bad. Dan Greenhaus, chief global strategist at BTIG LLC, tells Bloomberg News that "beneath the headlines, stuff wasn't terrible. ... When you dig into the household survey, it's not that bad. The participation rate went up, the labor force went up, the level of employment went up."

"Today's report is another reminder of both the progress that has been made and the challenges that remain," White House economist Jason Furman writes. "Businesses have now added 8.5 million jobs over the last 47 months and the unemployment rate ticked down to its lowest level in more than five years. But the economy is still healing from the Great Recession and steps are still needed to expand economic opportunity."

"The American people continue to ask 'where are the jobs?,' and the president clearly has no answers," House Speaker John Boehner, R-Ohio, says in a statement sent to reporters by his office.

The White House usually puts its analysis on its blog. We'll add some of that when its available.

As happens each month, the BLS report has some apparently contradictory data. The figure on job growth — 113,000 — is based on a survey of public and private employers. Another figure, though, appears to show more positive news: BLS estimates that 638,000 more people were employed in January than in December. That figure comes from a survey of households.

One explanation for the divergent views: 434,000 more people said they were working "part-time for noneconomic reasons" in January. Many also may have taken positions that employers added to their payrolls in previous months, but hadn't been filled until January.

"These numbers mean that Janet Yellen could get a baptism of fire when she gives her inaugural testimony to Congress next week," The Wall Street Journal says in its live blog about the employment report. It adds that:

"Ms. Yellen did a masterful job of getting senators to warm to her during her confirmation hearings. But now she's in the job, the questions could be tougher. If anything, the risk is that the soft data wiill nudge the generally dovish new Fed chair to emphasize the Fed's willingness to maintain monetary accommodation and that could stir up some of the Fed's more conservative critics on the Hill."

Yellen is due to testify before the House Committee on Financial Services next Tuesday and before the Senate Banking Committee next Thursday.

Here's some analysis from Kathy Bostjancic, director of macroeconomic analysis at the Conference Board, a business research group. She points to some reasons not to be too pessimistic based on the data in today's report:

"A gain of only 113,000 new jobs in January, on the heels of the even slower gain in December, likely sparks uncertainty about the strength of the labor market and direction of the overall U.S. economy.

"Still, the three-month average of private payroll increase is holding up at 168,000. Also, the revisions for 2013 show an adjustment of 509,000 more jobs by December than previously counted.

"There is no doubt that inclement weather in December played a role, although construction jobs held up reasonably well in January. We expect that an eventual return to more normal weather conditions will allow job gains to rebound back towards their previous 180,000 – 200,000 trend pace."

According to the historical records kept by BLS, the last time the unemployment rate was lower than 6.6 percent was in October 2008, when it stood at 6.5 percent.

Officially, the economy slid into recession in December 2007 and didn't emerge from that downturn until June 2009.

Our original post — 'Nervousness' About Economy Ahead Of Today's Jobs Report — previewed the report:

As we wait for this morning's much-anticipated report about job growth and unemployment in January, here's a preview that draws from the conversation NPR's John Ydstie had today with Morning Edition host Renee Montagne.

Economists expect to hear that job growth was stronger last month than in December, John said. Their prediction: The Bureau of Labor Statistics will say about 185,000 jobs were added to public and private payrolls in January.

In its initial report about December, BLS said just 74,000 jobs were added that month. That was far fewer than expected. It's important to bear in mind, though, that the figure could be revised in today's report.

If there were about 185,000 more jobs in January than in December, that would mean growth last month was about in line with the average pace over the last 12 months, John said.

But as he added, "there's nervousness about where we are right now."

Manufacturing may be "losing steam" in the U.S. and China, John said. There have been currency problems in emerging markets such as Turkey and Argentina. That has led some investors to pull their money out of those countries — places that in recent years had been helping to shore up economic growth around the world.

And financial markets have been worried lately about how the Federal Reserve's decision to begin scaling back the amount of stimulus it gives the economy will affect growth in coming months.

As we said Thursday, economists also expect to hear that the unemployment rate either stayed at 6.7 percent in January or perhaps ticked down to 6.6 percent. A dip might have been at least partly due to a large number of people leaving the labor force, either because they retired or because they gave up looking for work.

The report is due at 8:30 a.m. ET. We'll update with highlights and analyses.