Accessibility links
Avoid Atlanta Until Storm Passes, Governor Tells Truckers : The Two-Way With images of the thousands of vehicles abandoned on Atlanta's highways last month still fresh in their minds, authorities are trying to get out ahead of another round of winter weather that's bearing down on the city. Meanwhile, things are expected to start thawing in ice-covered Portland, Ore. 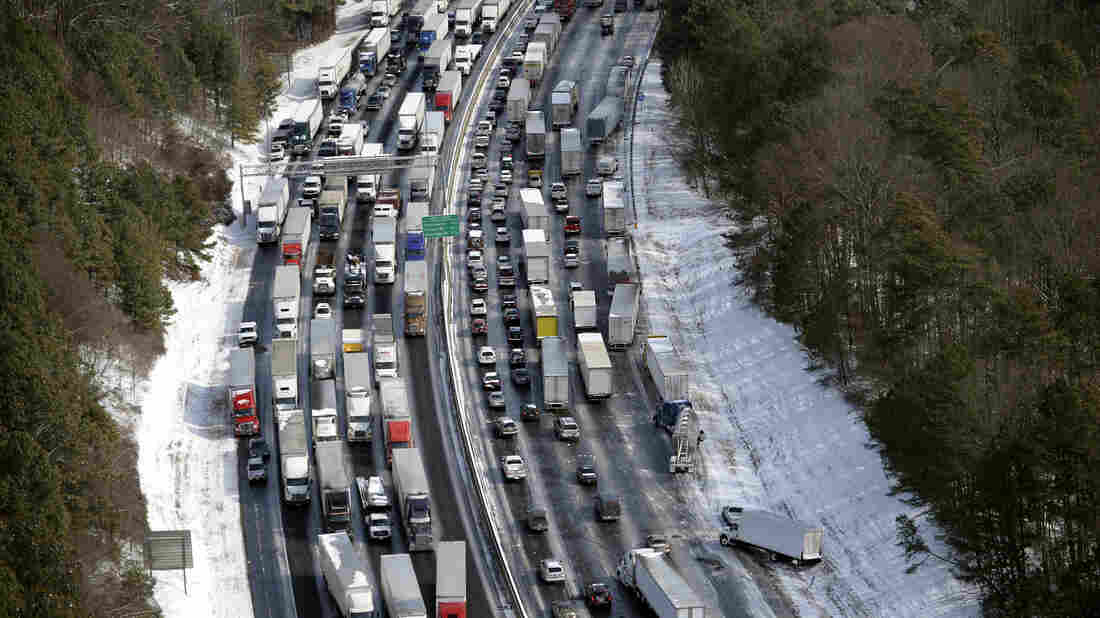 Jan. 29, 2014: Traffic is snarled along the I-285 perimeter north of Atlanta's metro area after an ice and snow storm passed through. Officials hope such a scene isn't repeated. David Tulis/AP hide caption 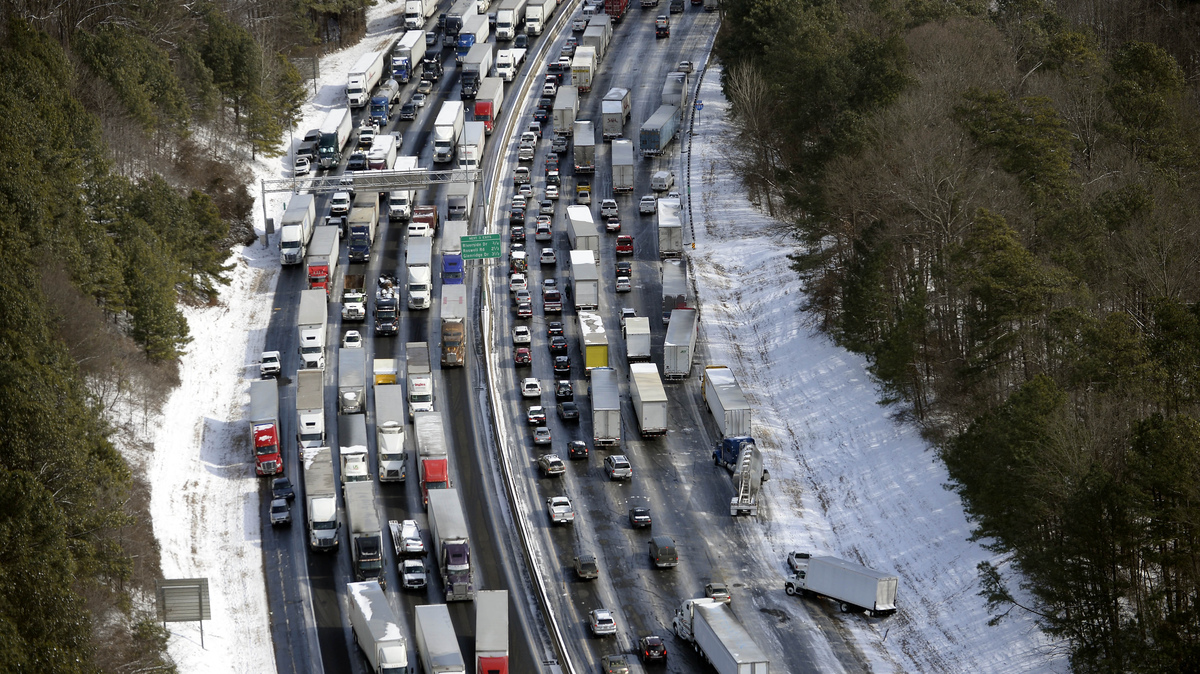 Jan. 29, 2014: Traffic is snarled along the I-285 perimeter north of Atlanta's metro area after an ice and snow storm passed through. Officials hope such a scene isn't repeated.

This time, Georgia officials seem determined to get way out ahead of the weather.

With the National Weather Service warning that another blast of rain, sleet, snow and possibly ice is headed for the Deep South later today, authorities are urging Atlantans to be off the roads by early evening.

— Noon, ET: "Gov. Deal has extended the state of emergency to include 31 additional counties, 45 total." [Georgia has 159 counties.]

And Gov. Nathan Deal, R, is specifically asking truckers to stay out of Atlanta's "perimeter" — the area inside the loop around the city formed by Interstate 285.

Deal and other Georgia officials are trying to avoid, of course, a repeat of what happened the last week of January, when snow and ice hit Atlanta and thousands of drivers were forced to abandon their vehicles as roads became impassable, iced-over parking lots. While state and local officials later apologized for not moving faster to warn Atlantans of the approaching storm and to prepare for it, they also said that jackknifed trucks in particular were a major part of the problem during that storm.

Now, as The Atlanta Journal-Constitution says, "Deal doesn't want to take any chances after the icy gridlock embarrassed Georgia in late January."

According to our colleagues at WABE in Atlanta:

"The winter storm watch issued by the National Weather Service is in effect from Monday evening through Wednesday morning. National Weather Service meteorologist Trisha Palmer told WABE a mixture of rain and snow could come to Metro Atlanta very late Monday night into early Tuesday morning. She says that mixture could produce an inch of show in Atlanta.

"Palmer said a second round of winter weather could hit Metro Atlanta Tuesday night. With that round, she said a very serious ice storm is possible. Palmer said it could cause a lot of power outages and negatively affect travel. With that second round of weather, Palmer said Atlanta could get a tenth of an inch of ice. She says the most ice, up to a quarter of an inch, could occur east of Atlanta near Athens, Washington, Warrington and possibly Gainesville."

Preparations are also underway in Alabama. The January storm led to icy gridlock in Birmingham as well. There, according to The Birmingham News, "officials with the National Weather Service forecasting office in Huntsville said the area could also see sleet accumulations of as much as a half-inch."

Elsewhere in the eastern half of the nation, The Philadelphia Inquirer says that as of early Monday about 18,400 customers in southeastern Pennsylvania were still without power following last week's snow and ice storms in that region. That's down from a peak of more than a half-million customers.

Meanwhile, as we reported on Sunday, there's some welcome precipitation on the parched West Coast. But the snow, sleet and freezing rain around Portland, Ore., and into Washington state have also caused problems. The Oregonian writes today that:

"Cold air pouring out of the mouth of the Columbia River Gorge will make a steady retreat, forecasters say, but still might spark a light amount of freezing rain in areas east of Interstate 205 during Monday morning's commute.

"A freezing rain advisory will remain in place there until noon Monday but stay in effect through midnight Monday night for the central gorge and upper Hood River valley.

"Temperatures are expected to continue to moderate in Northwest Oregon, spiking into the upper 40s by Monday afternoon and throughout the week, with lower 40s at night. And rain. Lots of rain."