Accessibility links
'Mind-Boggling,' Historic Ice Storm Headed For Deep South : The Two-Way The National Weather Service is using strong language to warn people in Atlanta and places nearby that dangerous weather is on the way. President Obama has declared an emergency in the state of Georgia, ordering federal agencies to help local efforts. 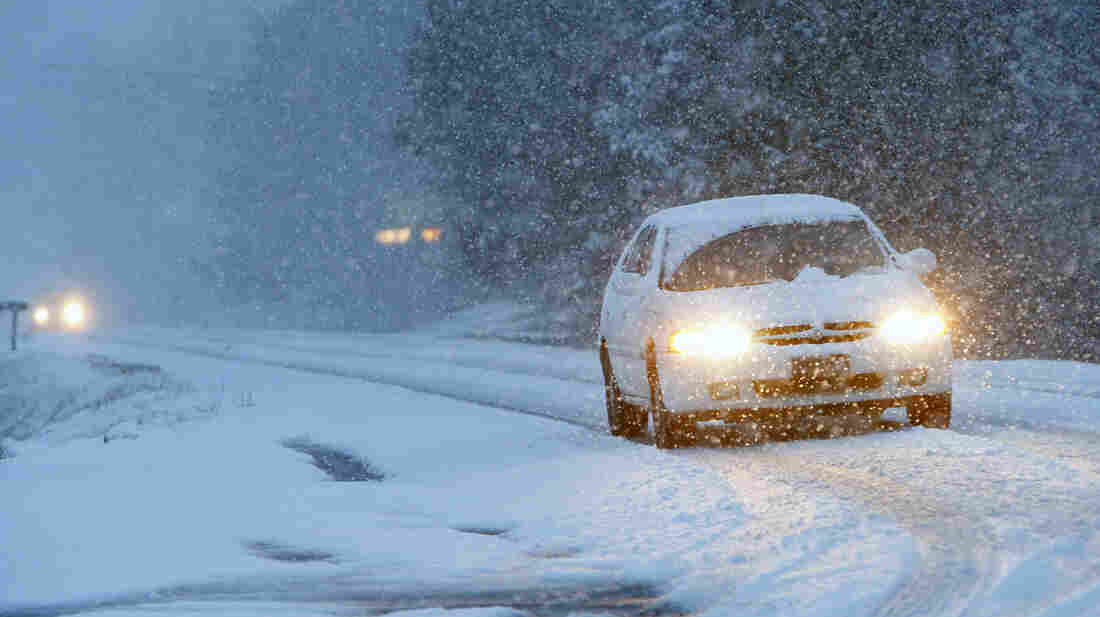 This car was navigating a snowy road early Tuesday in Fort Payne, Ala. The wicked winter weather there is spreading across the Deep South. Hal Yeager/AP hide caption 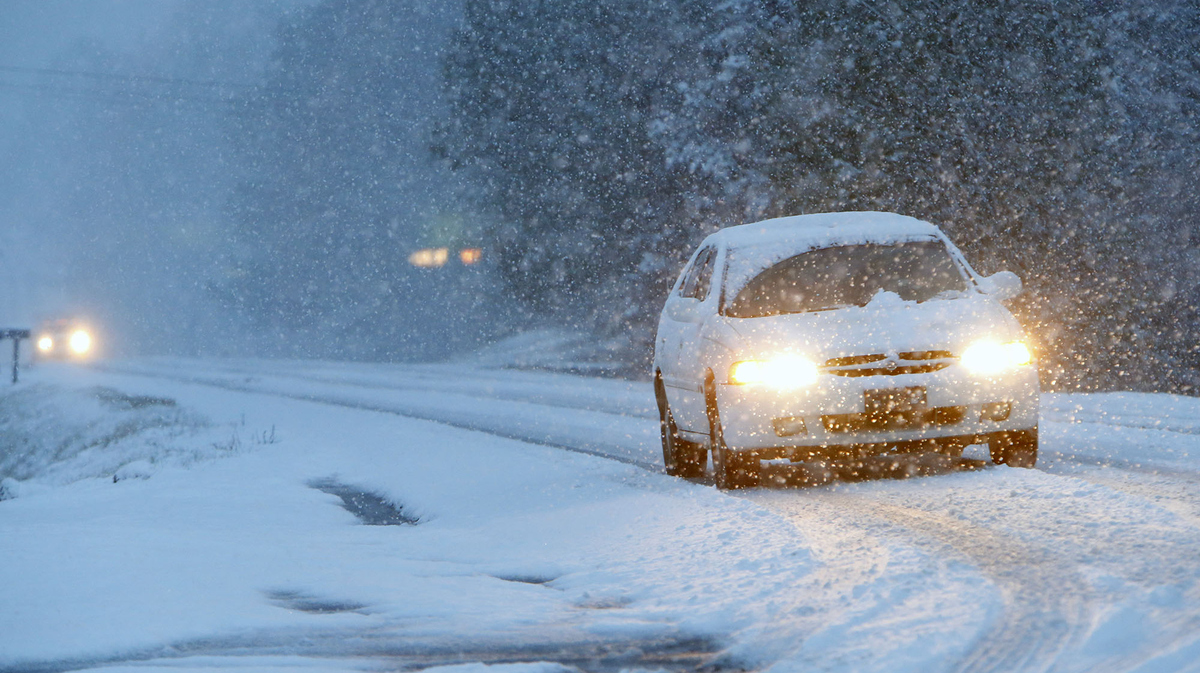 This car was navigating a snowy road early Tuesday in Fort Payne, Ala. The wicked winter weather there is spreading across the Deep South.

This is not our language. It comes from the forecasters at the National Weather Service, who we have to hope do not say things such as this unless they really mean it:

"Mind-boggling if not historical" ice accumulations are expected Wednesday and Thursday across a wide swath of the Deep South that includes Atlanta, other parts of Georgia, Columbia, S.C., and up to Raleigh/Durham, N.C. The forecasters are warning of a half-inch to an inch of ice.

What's more, from parts of North Carolina up to just south of Washington, D.C., "8 to 10 inches of snow" are expected.

"SIGNIFICANT ICE ACCUMULATION WILL PRODUCE DANGEROUS TRAVEL CONDITIONS. DO NOT ATTEMPT TO DRIVE OR WALK. ICE ACCUMULATION WILL DAMAGE TREES AND POWER LINES. IF YOU ENCOUNTER DOWNED POWER LINES ... DO NOT TOUCH THE LINES BECAUSE YOU COULD BE ELECTROCUTED. REPORT DOWNED POWER LINES TO LAW ENFORCEMENT OR THE POWER COMPANY. PREPARE TO REMAIN IN A SAFE SHELTER WITHOUT ELECTRICITY FOR MANY HOURS. OBTAIN VITAL SUPPLIES SUCH AS POTABLE WATER...NON-PERISHABLE FOOD...MEDICINE...BATTERIES...FLASHLIGHTS AND A BATTERY POWERED RADIO."

We want to repeat that those warnings are from the National Weather Service, not The Weather Channel — which some Two-Way commenters in the past have suggested may overhype some storms.

For its part, The Weather Channel is writing that "if you live in the South, now is the time to prepare for another disruptive, potentially crippling winter storm."

So far, at least, Atlanta seems to have avoided a repeat of last month's disaster — when snow and ice trapped thousands of commuters on the highways. The Atlanta Journal-Constitution says "schools and government offices across most of metro Atlanta have opted to close Tuesday and Wednesday, which will help keep many drivers at home. That should allow workers to salt and sand roads they couldn't get to when traffic suddenly came to a standstill during the last storm."

Our colleagues at WABE in Atlanta are following the news as well. Alabama is also in the ice storm's cross hairs.

In Mississippi, where northern parts of the state could get 4 inches of snow, the state's Emergency Management Agency says two people have died in separate car accidents due to ice on the road.

"It is extremely dangerous, not something that Mississippians are used to driving in," says Greg Flynn of the emergency agency. "It's hard enough for the folks up North trying to maneuver out in ice and snow, much less folks in the South. The number one thing we can say is that if you're in an area with frozen precipitation coming down, stay put where you are."

How painful is this storm going to be for Georgia? Here's a graphic issued by the Weather Service at 3:10 p.m. ET. Note that the service does not normally use this kind of descriptive language:

The Atlanta Journal Constitution is starting to report the first effects of the predicted storm: Delta, whose hub is in Atlanta, has cancelled 573 flights today and it is canceling 1,500 flights scheduled for Wednesday.

"Southwest Airlines said it is suspending most, if not all, operations in Atlanta tomorrow. That means nearly all Southwest and AirTran Airways flights going to and from Hartsfield-Jackson International Airport will be canceled for Wednesday. Southwest and AirTran combined operate more than 160 daily departures from Atlanta and a similar number of arrivals."

Virginia Gov. Terry McAuliffe has declared a state of emergency ahead of the winter storm.