Accessibility links
'Crippling' And 'Paralyzing': Southern Storm Is Wicked : The Two-Way The National Weather Service is not holding back on its warnings about the ice and snowstorm that is hitting the Deep South and will move into the Mid-Atlantic later Wednesday. Forecasters warn of "impossible travel conditions" in Georgia and dangerous roads elsewhere. Thousands are without power.

(Click here to jump to a quick look at the latest news about the storm.) 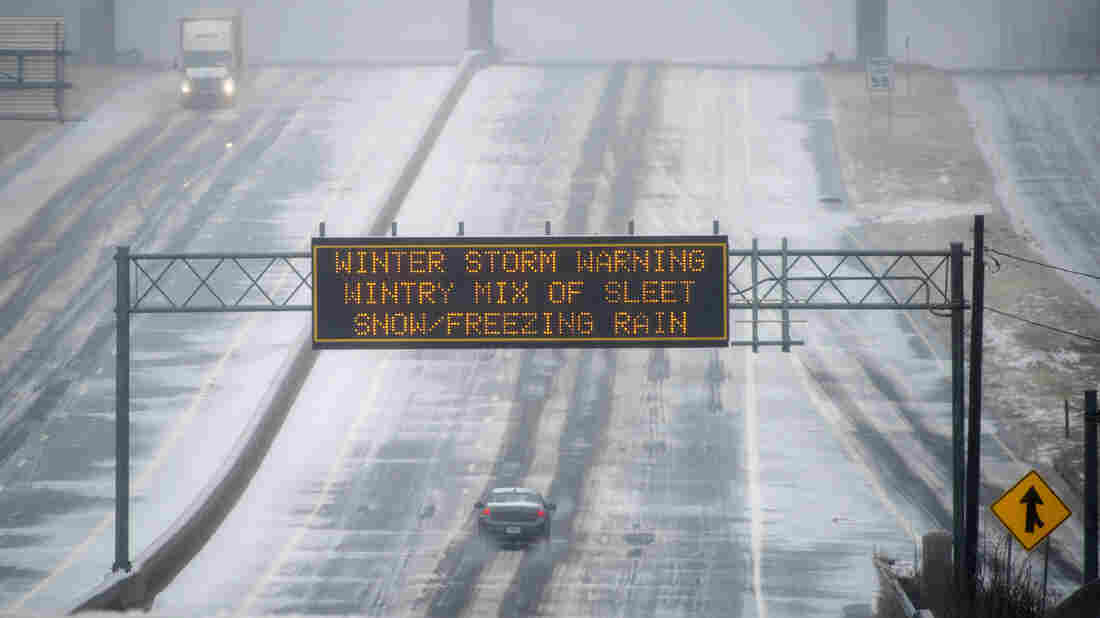 Not a good day for a drive: A Georgia Department of Transportation sign warned motorists in Norcross Wednesday morning, and few were on the roads. John Amis/AP hide caption 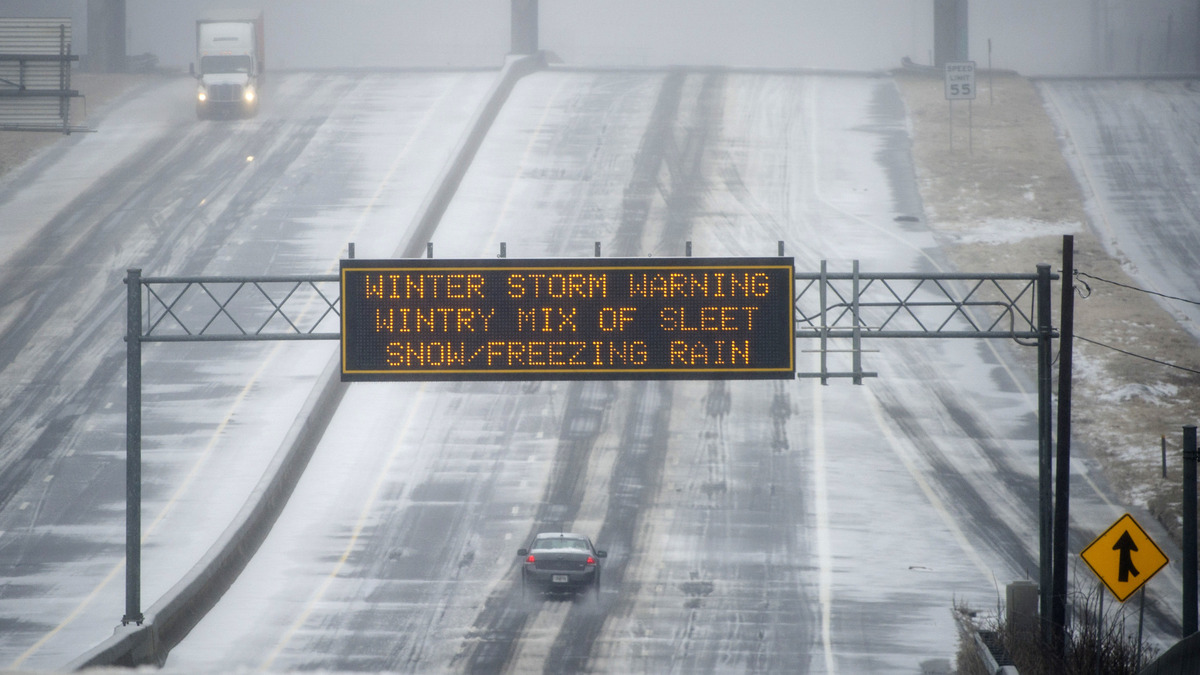 Not a good day for a drive: A Georgia Department of Transportation sign warned motorists in Norcross Wednesday morning, and few were on the roads.

As a wicked storm of ice and snow spreads over parts of Alabama, Georgia and the Carolinas and heads toward the Mid-Atlantic and Northeast, the National Weather Service is again warning that it's getting ugly out there. Its forecasters say the millions of people in the storm's path should be prepared to stay inside and cope with power outages that might last for days.

Commuters in North Carolina who had hoped to avoid the storm's ice and snow didn't get enough of a jump on the storm, which brought heavy snow just after noon Wednesday. Some drivers are abandoning their cars after hours of delays — leaving them in roadways and adding to the slowdown.

The number of people who lack electricity rose steadily today; as of 7 p.m. ET, South Carolina officials said around 230,000 customers don't have power. Hundreds of thousands of others are in the same situation, from Texas across to the East Coast.

— 7:15 p.m. ET. Trouble In NC: The fast-arriving storm hit the Raleigh area around noon, frustrating many motorists and leading officials to postpone a basketball game between arch-rivals North Carolina and Duke.

— 7 p.m. ET. Two More Deaths: From Georgia comes news that a man, 50, died after leaving to walk to a neighbor's house. And a woman, 63, was found dead inside her home, which reportedly didn't have heat.

— 1:45 p.m. ET. Eight Deaths: "At least eight deaths were already blamed on the storm: one in North Carolina, one in South Carolina, two in Mississippi and four in Texas." (The Weather Channel)

— 12:55 p.m. ET. Flight Delays, Cancellations Pile Up: FlightAware.com says that nearly 3,100 flights into or out of the U.S. have been canceled today. Nearly 1,300 flights have been delayed.

— 11:55 a.m. ET. 300,000 Without Electricity: NBC News reports that "nearly 300,000 customers across Louisiana, Arkansas, Texas, Mississippi, Alabama and the Carolinas were without power early Wednesday. But Georgia was bearing the brunt of the wicked weather, with more than 200,000 customers in the dark Wednesday after frozen tree limbs slashed power lines."

— 9:50 am. ET. 60,000+ Without Power In Georgia: "Early Wednesday, power outages across Georgia cut off more than 60,000 customers — and the number was rising steadily as the storm continued to punish the region." (The Atlanta Journal-Constitution)

WABE in Atlanta is following the storm news here.

As of early evening, 2,860 flights into or out of the U.S. had been delayed and 3,362 had been cancelled, according to FlightAware.com.

Also by early evening, there were reports of at least 13 weather-related deaths, according to The Weather Channel.

Here is some of the normally calm and cool Weather Service's latest language about the storm, which is moving over the Southeast today and will be in the Mid-Atlantic as afternoon turns into evening:

-- "Winter storm to result in impossible travel conditions with widespread and extended power outages" around Atlanta and across much of Georgia.

-- "A major winter storm with the potential for crippling ice and snow accumulations is underway across the Southeast."

-- In South Carolina, "consider delaying motor vehicle travel until freezing rain ends [around midday]" and then stay off the roads again tonight when freezing rain returns.

-- "Hazardous travel conditions are possible" in North Carolina and Virginia as snow starts to fall in the afternoon and evening.

Our colleagues at WABE in Atlanta say people in and around that city "can expect 1/3 inch of ice accumulation at a minimum, and probably closer to 1/2 inch."

The storm is already affecting Atlanta. According to The Journal-Constitution:

"The potentially devastating winter storm that forecasters and the governor have been warning about for days began unfolding before daybreak Wednesday as temperatures dropped to 32 degrees or below and began freezing the precipitation that returned overnight.

"It's being called catastrophic and historic, and those aren't words tossed around lightly, according to meteorologist Brad Nitz with Channel 2 Action News."

In Columbia, S.C., The State reports that the weather system "is expected to slap enough ice on trees and power lines to be considered a major ice storm."

North Carolina's Raleigh News & Observer writes that "the National Weather Service warned that a 'potentially crippling' storm will hit the Triangle with 2 to 4 inches of snow and sleet mixed with freezing rain that could add a layer of ice as thick as one-half inch."

Virginia has joined other states in declaring a state of emergency.

The Weather Channel, meanwhile, is predicting "paralyzing ice and snow."

Since there's talk of power outages, this is a good time to remind everyone to be very careful about generators and other alternative sources of power or heat. The Centers for Disease Control and Prevention has reposted its warnings about carbon monoxide poisoning.