Accessibility links
Mistrial On Murder Charge In Florida Gas Station Shooting : The Two-Way The Florida jury did find Michael Dunn guilty on four lesser charges including attempted second-degree murder in the 2012 killing of a teenager in a Jacksonville gas station parking lot. 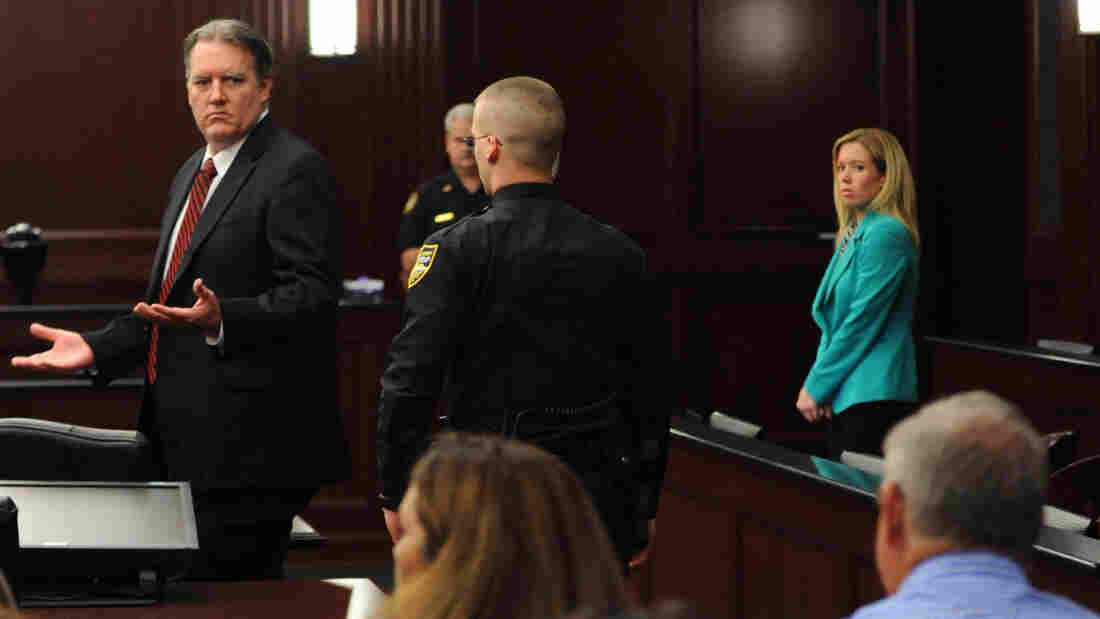 Michael Dunn reacts after the verdict is read in Jacksonville, Fla., on Saturday. Dunn was convicted of attempted murder in the shooting death of a teenager over an argument over loud music, but jurors could not agree on the most serious charge of first-degree murder. Bob Mack/The Florida Times-Union/AP Pool hide caption 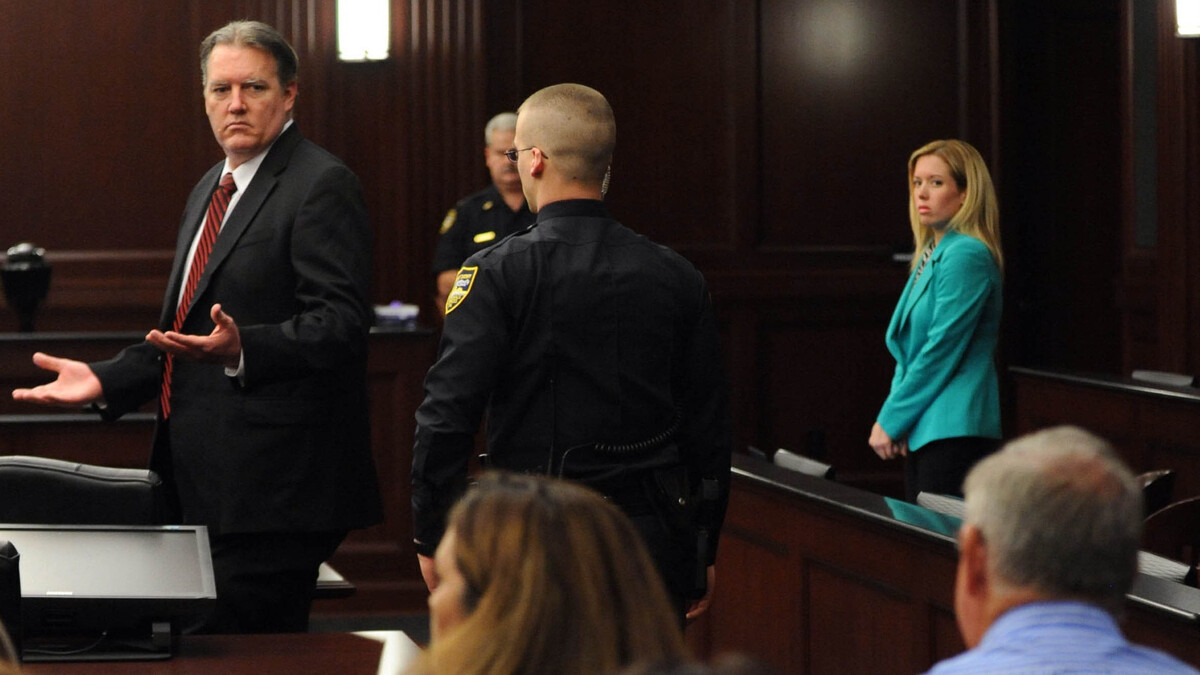 Michael Dunn reacts after the verdict is read in Jacksonville, Fla., on Saturday. Dunn was convicted of attempted murder in the shooting death of a teenager over an argument over loud music, but jurors could not agree on the most serious charge of first-degree murder.

A mistrial was declared on Saturday in the first-degree murder charge of Michael Dunn after a Florida jury failed to come to an agreement. The jury did find Dunn guilty on four lesser charges, including three counts of attempted second-degree murder in the 2012 killing of a teenager in a Jacksonville gas station parking lot.

Police say Dunn shot and killed an unarmed man, Jordan Davis, 17, after an argument broke out over loud music coming from Davis' car. Dunn had claimed he acted after being threatened.

The 12-member jury had several options in rendering its verdict, ranging from manslaughter to first-degree murder. They also had the option of finding that he was guilty of some crimes, and not of others, which is what happened in the end.

The case's racial aspect — Dunn is white; Davis was black — has helped fuel interest in the case, particularly as the verdict comes roughly six months after neighborhood watch volunteer George Zimmerman was acquitted in the death of Trayvon Martin, an unarmed black teenager.

"We intend to fully push for a new trial. ... Justice for Jordan Davis is as important as it is for any victim," says Florida circuit State Attorney Angela Corey, who supervised the prosecution of Dunn as well as that of Zimmerman. Prosecutors would pursue murder charges in the new trial, according to News One.

Dunn is scheduled to be sentenced in late March.

After the mixed verdict was announced, members of the Davis family addressed the media. Here's what his mother, Lucia McBath, had to say, in a brief and emotional statement:

"It's been a long, long road, and we're so very happy to have just a little bit of closure.

"It's sad for Mr. Dunn that he will live the rest of his life in that sense of torment, and I will pray for him, and I've asked my family to pray for him.

Ron Davis, Jordan's father, spoke next, acknowledging that he has had to restrain himself in speaking publicly about the case. But he thanked those who have called him and McBath good parents.

Davis added that there are many other good kids out there who deserve the law's assurance that they're protected from violence.

With the jury holding more than 30 hours of deliberations over several days, crowds of protesters gathered outside the courthouse on both Friday and Saturday in anticipation of a verdict.

As public broadcaster WJCT reports, those present included members of the New Black Panther Party and the Southern Christian Leadership Conference, along with individuals such as Jaterra Lewis and her mother. The 14-year-old held a sign saying, "I could be next."

Here's how the shooting in November 2012 were recounted in court, as NPR's Greg Allen reported:

"It was in 2012, the day after Thanksgiving, that Davis, 17, and three friends stopped at a gas station and convenience store in Jacksonville. They were in an SUV and were playing their music — loud.

"Dunn and his girlfriend pulled into the parking space next to them. Dunn, 47, asked them to turn down their music, and at first they did. But then, they turned it back up. And prosecutor John Guy said Davis and Dunn began — in his words — 'jawing at each other.'

"'The defendant rolled down his window again and said, "Are you talking to me?" And Jordan Davis looked at him and said, "Yeah, I'm talking to you," Guy told the court. "And then [Dunn] said, 'You're not going to talk to me like that.'

"That's when Dunn took a gun from his glove box and fired three shots into Davis' car door. All three hit Davis, killing him."

Dunn's defense attorney have said he acted only after being directly threatened by Davis — attorney Cory Strolla told jurors that Davis told Dunn, "I'm going to f - - - ing kill you. I should kill you right now."

In court, Dunn testified that he saw Davis holding a shotgun. But police never found such a weapon at the scene, and no other witnesses corroborated that account.

As Greg notes, the idea of a threat is particularly relevant in this case, as it's one of the requirements to determine if someone has acted in a justifiable manner in taking a life under Florida's "stand your ground" self-defense law.

The shooting occurred shortly after Dunn left his son's wedding. As CNN reported earlier this month, Dunn acknowledged to police that he'd had two drinks – and that after the shooting, he and his girlfriend left the scene without contacting the authorities.

The pair drove to a bed and breakfast, "where they checked into their room and ordered pizza but didn't call police," CNN reports Dunn telling police.

The jury's long deliberations have included several requests to inspect evidence in the case, including surveillance video filmed at the gas station. But the jury was quiet Friday, presumably debating the case. Those discussions continued Saturday, after jurors told the court that they had "hit a wall" Friday evening.

"Thursday's deliberations were peppered with questions from the jury," WJCT reports, "made up of four white women, four white men, two black women, one Hispanic man and one Asian woman."

"Now that the jury has spoken, I want to thank the jurors for their dedicated service. Tomorrow would have been Jordan's 19th birthday. My prayers go out to his family. I share the community's grief at his senseless death.

"We should never forget the tragic loss of a young life, and we must commit to doing all we can to protect all of our young men and women and to help them realize their full potential."

That's from the local Florida Times-Union. The newspaper says that after the verdict was announced, protesters outside the courthouse began chanting, The system has failed us," and marched to the State Attorney's office of Angela Corey, where they called for her resignation.