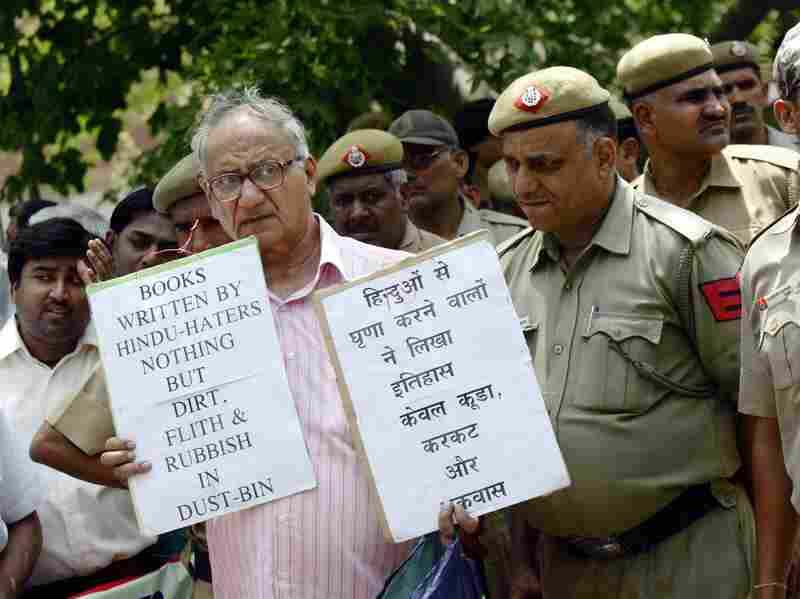 Indian activists from the student wing of Hindu nationalist Bharatiya Janata Party protest near the U.S. Embassy in New Delhi on May 25, 2010, against Wendy Doniger's The Hindus. Penguin Books, India, said this week that it would withdraw the book and pulp it. Anindito Mukherjee/EPA/Landov hide caption 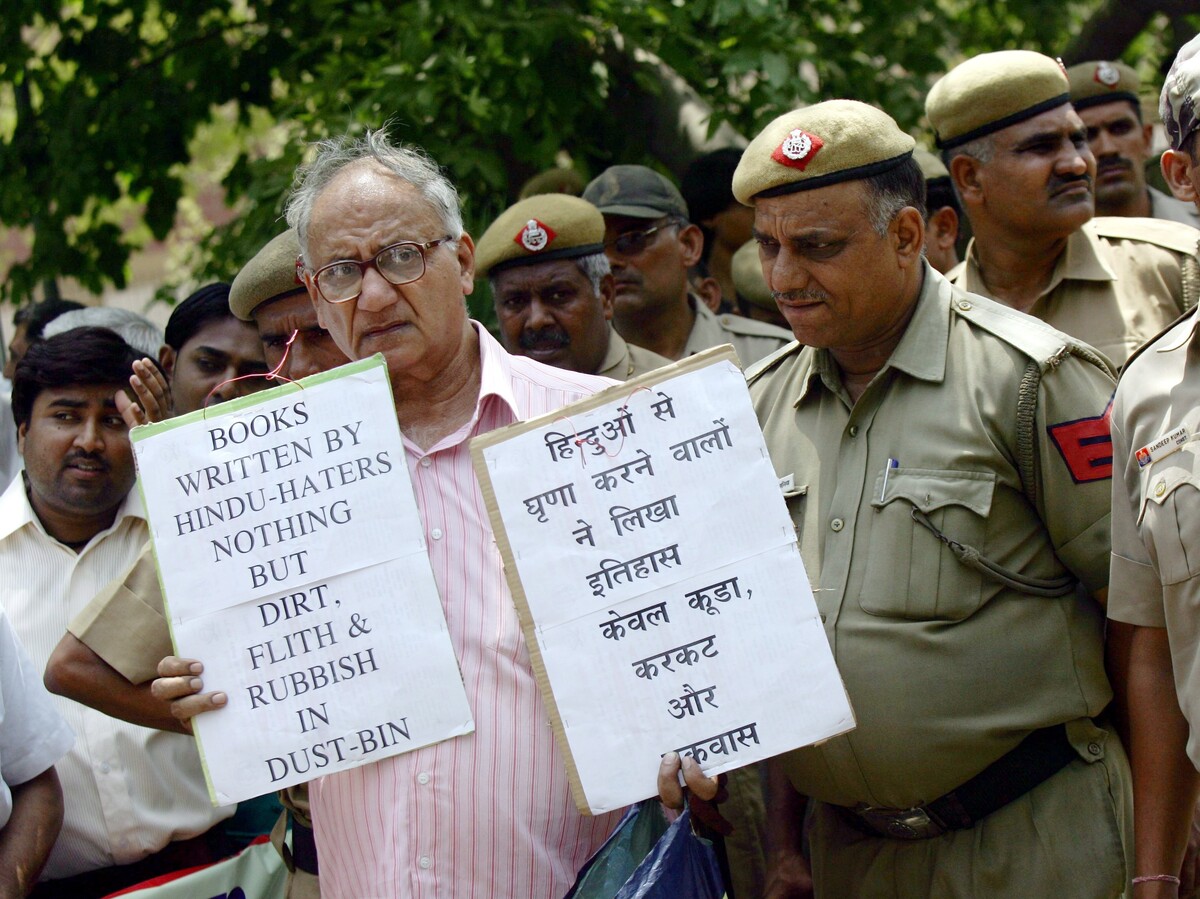 Indian activists from the student wing of Hindu nationalist Bharatiya Janata Party protest near the U.S. Embassy in New Delhi on May 25, 2010, against Wendy Doniger's The Hindus. Penguin Books, India, said this week that it would withdraw the book and pulp it.

We told you earlier today [Friday] about a University of Chicago professor whose book was withdrawn in India after a Hindu group brought a court challenge against the publisher, Penguin Books, India.

The book in question is Wendy Doniger's The Hindus: An Alternative History. The Shiksha Bachao Aandolan [Save Education Movement], a small Hindu group, claimed in its lawsuit that the book's focus was sexual and "denigrated Hindus and show[s] their religion in poor light."

"She is insulting our gods and goddesses and religious leaders and texts and even our freedom fighters," Dinanath Batra, the head of Shiksha Bachao Aandolan, told Time in an interview. "I don't have any objection to sex and neither does our religion, as long as it's within the parameters of religion."

He told The New York Times that he also wanted to replace all textbooks used in Indian schools.

Penguin Books, India, said that it had fought the lawsuit for years but was withdrawing the book because "a publishing company has the same obligation as any other organisation to respect the laws of the land in which it operates, however intolerant and restrictive those laws may be." The company said it would shred the books.

In a statement, Doniger said she did not blame Penguin Books, India, for yanking her book. She said the publisher had defended it in courts for four years. She added:

"They were finally defeated by the true villain of this piece—the Indian law that makes it a criminal rather than civil offense to publish a book that offends any Hindu, a law that jeopardizes the physical safety of any publisher, no matter how ludicrous the accusation brought against a book."

The author also told NPR's Robert Siegel on Friday that while she thinks the law should be changed, she is gratified by the reaction to the withdrawal of the book.

"If the purpose of these gentlemen was to keep people from buying my book and reading it, it has backfired quite wonderfully," she told Robert. "The book is much more popular than it ever would have been before. ... Copies are circulating in India and Kindle is available in India.

Indian critics of the withdrawal say the case has broad implications for freedom of speech in the country.

Indeed, in its statement, Penguin Books, India, said the case has "great significance not just for the protection of creative freedoms in India but also for the defense of fundamental human rights."

Prata Bhanu Mehta, a noted Indian columnist, said destroying the books amounted to "the pulping of liberal India." And Arundhati Roy, the winner of the Man Booker Prize, wrote an open letter to Penguin Books, India, her publisher, in which she said: "You must tell us what happened. What was it that terrified you? You owe us, your writers an explanation at the very least."

The Hindus isn't the first book to fall afoul of Indian law and religious groups. More recently, James Laine, a professor at Macalester College in St. Paul, Minn., ran into trouble with Hindu groups over his book, Shivaji: Hindu King in Islamic India. The book was banned in one state after protests — a ban that was subsequently lifted. And perhaps the most famous work banned in India is Salman Rushdie's Satanic Verses, which some Muslims find offensive.