Accessibility links
Mars 'Jelly Doughnut' Mystery Solved: It's Just A Rock, NASA Says : The Two-Way The strange red-and-white object that intrigued Mars enthusiasts for weeks turns out to be just a piece of Mars rock chipped off by the Opportunity rover. 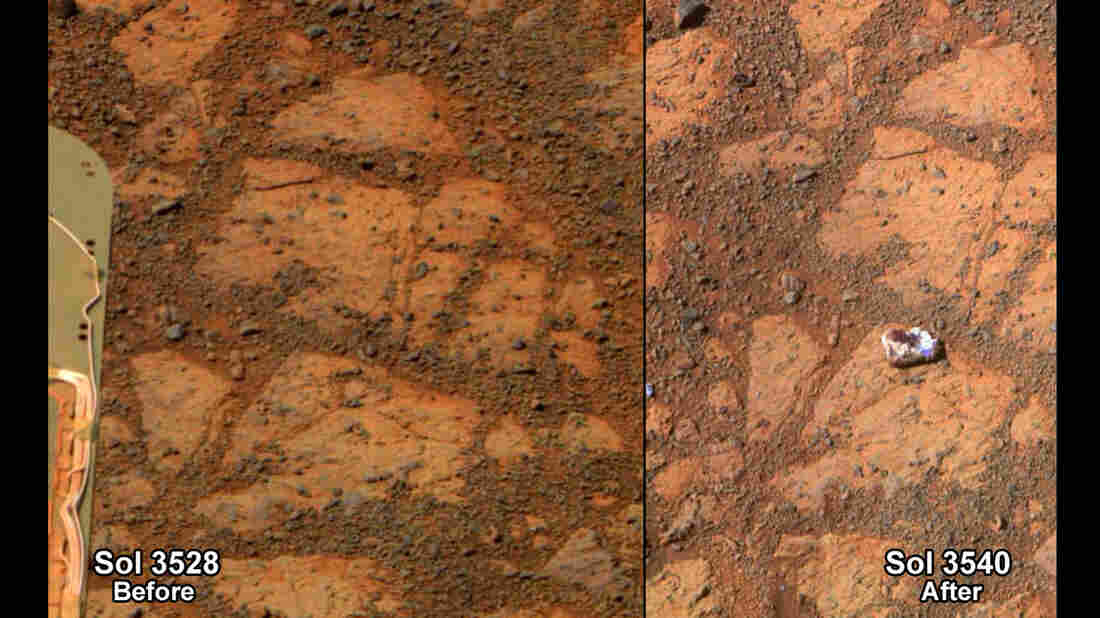 This composite image provided by NASA shows before-and-after images taken by the Opportunity rover on Mars of a patch of ground taken on Dec. 26, 2013, showing the "Pinnacle Island" rock. AP hide caption 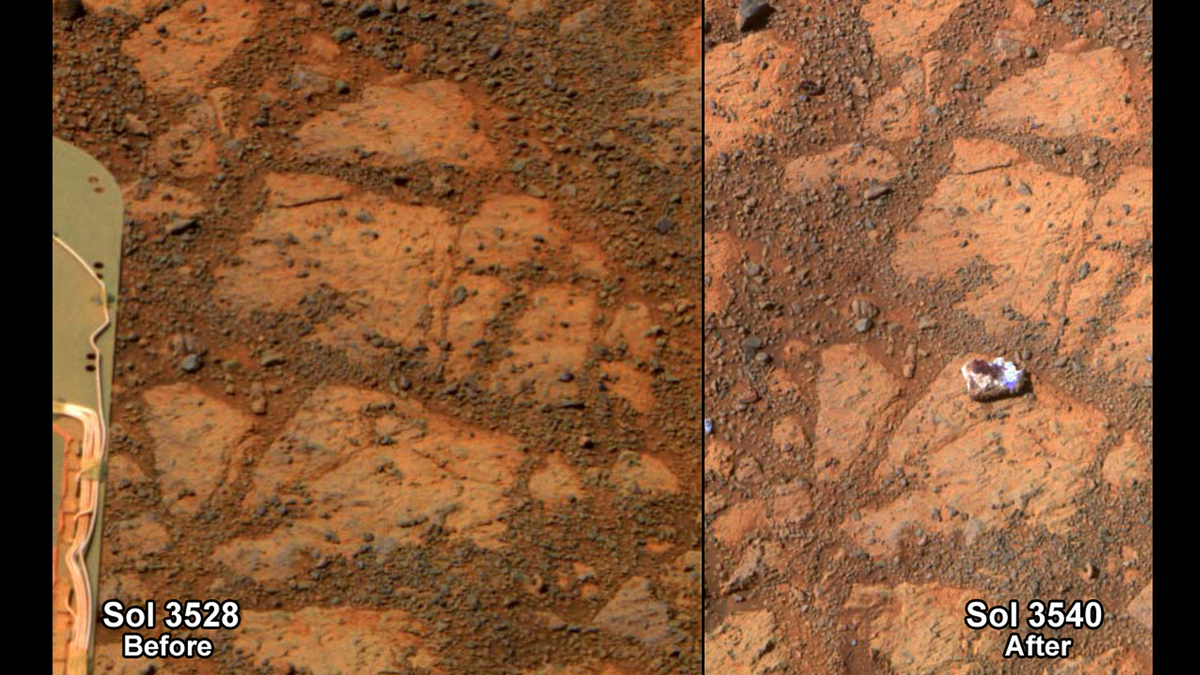 This composite image provided by NASA shows before-and-after images taken by the Opportunity rover on Mars of a patch of ground taken on Dec. 26, 2013, showing the "Pinnacle Island" rock.

It appeared out of the red, like something dropped by a Martian Homer Simpson. But now NASA has an explanation for the "jelly doughnut" object photographed by the Opportunity rover in December.

First, here's what it isn't: It is not a fungus-like Martian organism, nor is it ejecta shot into the air by a nearby (and unseen) meteor impact.

Instead, it's geologic roadkill. Basically.

"We drove over it," Opportunity's Deputy Principal Investigator Ray Arvidson said in a statement on Friday.

The whitish rock, with what looks suspiciously like a delicious red pastry filling, has been dubbed "Pinnacle Island" by researchers. In a set of before-and-after photos snapped by Curiosity's onboard cameras, it's first not there and then, suddenly, it is.

As The Los Angeles Times says:

"The small rock became a subject of worldwide interest soon after it was spotted Jan. 8 by Opportunity's cameras. It was puzzling because it did not show up in images the rover took of the same location taken 12 days earlier."

Many people on social media were simply having fun with the mystery, but to some it was a more serious matter. Rhawn Joseph, who describes himself as a neuroscientist and astrobiologist, went so far as to file a lawsuit against NASA last month, accusing the space agency of not doing its duty to fully investigate the possibility of life on Mars, calling its failure to release high-resolution photos of the object "recklessly negligent and bizarre."

Joseph's theory is that "Pinnacle Island" is actually "a fully grown bowl-shaped organism resembling Apothecia," which are "a mixture of fungus and cyanobacteria."

Whether you believe JPL's explanation or not, the conclusion that it's just a piece of Martian rock is a grand nod to William of Occam (c. 1287-1347), whose principle of parsimony — which has guided scientists for centuries — dictates that the simplest explanation is usually the correct one.