Accessibility links
World's Largest Oyster Is Size Of A Man's Shoe : The Two-Way At nearly 14 inches long, a mammoth mollusk is still alive and growing, says the biologist who found it in Denmark. The oyster is roughly comparable to a size 11 shoe.

World's Largest Oyster Is Size Of A Man's Shoe

World's Largest Oyster Is Size Of A Man's Shoe 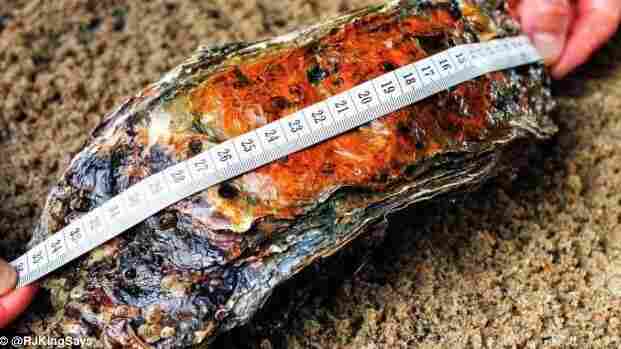 Even if you ignore the giant oyster's size, its rich patina and rippling layers hint at its age, estimated at 15-20 years old. @RJKingSays hide caption 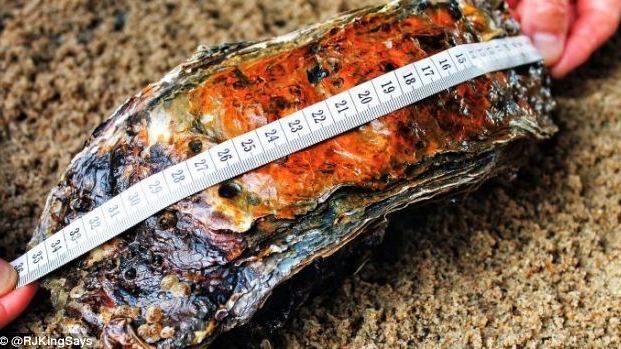 Even if you ignore the giant oyster's size, its rich patina and rippling layers hint at its age, estimated at 15-20 years old.

The world's largest oyster is nearly 14 inches long and resides in Denmark, according to the folks at Guinness World Records. And it's still alive and growing, according to Christine Ditlefsen, the biologist at the Wadden Sea Centre whose world record was recently certified.

The oyster was found in October in Wadden Sea National Park, a shallow area off of the North Sea on Denmark's southwestern coast. Its size and shape could be said to resemble a huge plaintain. But when they found it, the Wadden staff compared the oyster to a large and sturdy shoe. 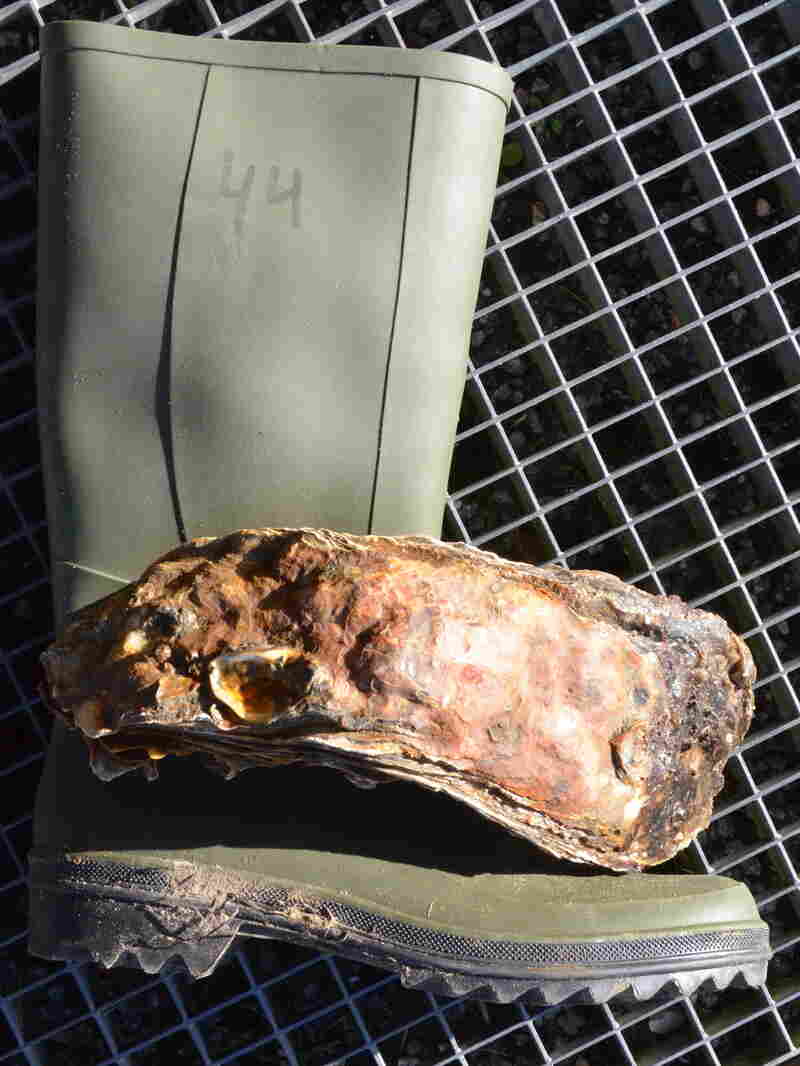 It's alive: At nearly 14 inches long, this oyster has been certified as the world's largest. It's also around the same size as a man's size 10-1/2 or 11 shoe here in the U.S. Wadden Sea Centre hide caption 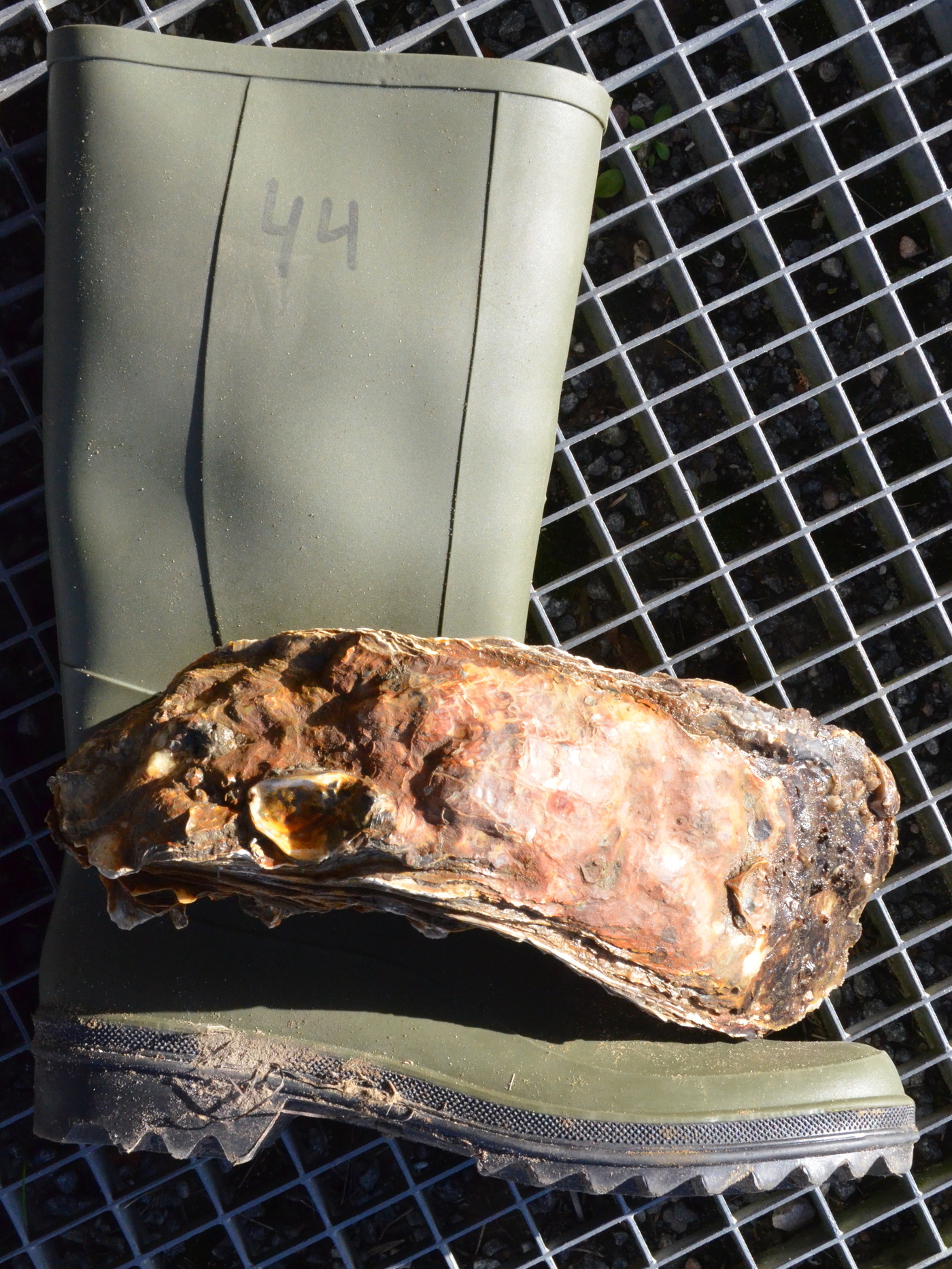 It's alive: At nearly 14 inches long, this oyster has been certified as the world's largest. It's also around the same size as a man's size 10-1/2 or 11 shoe here in the U.S.

"My staff called me immediately and said we've found this oyster that's as big as a 44 shoe," Klaus Melbye, the head of the Wadden center, told the food website Fine Dining Lovers in October, when the discovery was first reported.

Here in America, a European size 44 is equal to a men's shoe size of 11 (or a largish 10-1/2; shoe sizes aren't the most scientifically calibrated things). But the oyster might outgrow that comparison, because it could live another 10 years.

The new Guinness page for the large oyster lists it at 13.97 inches long and 4.21 inches across. The notation continues, "This large oyster has another five oysters attached to it! In total, this cluster of oysters weighs 1.62 kg (3.56 lb)."

According to Ditlefsen, the oyster has a healthy appetite. Here's what she told us today after we asked for an update on the mammoth mollusk:

"The oyster is still alive and is on display in our exhibition here at the Wadden Sea Centre (Vadehavscentret, Okholmvej 5, DK-6760 Ribe, Denmark). We feed it plankton algae and it eats well, so we hope that we can keep it alive for many years.
"It is 15-20 years old, and probably one of the first Pacific Oysters (Crassostrea gigas) that came to our part of the Wadden Sea. To know the exact age, we will have to wait until it dies a natural death (hopefully in many years – oysters are recorded to be 30 years old).
"After the oyster is dead it is possible to make a cut in the shell, and here it is possible to count the growth layers – and then we will know the exact age."

News of the Danish oyster discovery could motivate U.S. oyster-hunter Richard Mesce, who in recent years announced finding a world-record contender in California's Humboldt Bay. In 2008, the retired Navy pilot said he found an oyster measuring some 13 inches long and about 6 inches wide — after more than 100 hours of searching.

If you've read all this and can't stop thinking about the fact that you could possibly eat an oyster that's old enough to drive, we have one suggestion: consider the clam. As Mark reported in November, "That Clam In Your Chowder Might Be Hundreds Of Years Old."