Accessibility links
CBO: Minimum Wage Hike Could Boost Paychecks – And Cut Jobs : The Two-Way Both backers and opponents of a higher federal minimum pay rate are latching on to different findings in a new Congressional Budget Office report on the proposal's effects. We list the report's pros and cons. 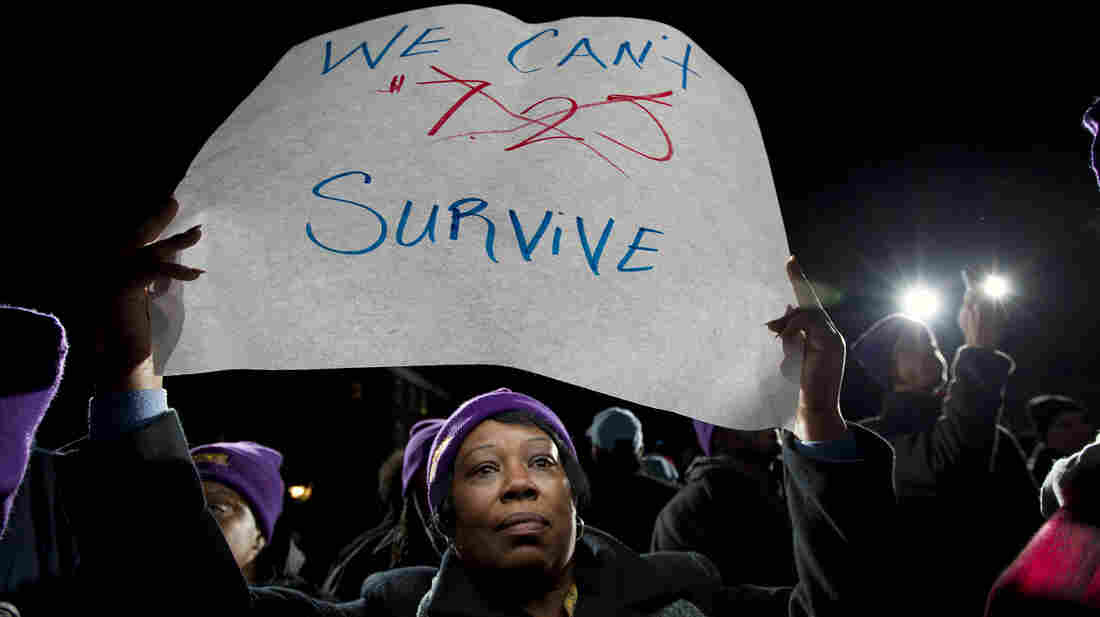 Darlene Handy of Baltimore holds up a banner at a rally supporting a pay measure in Maryland. More than 20 states have raised minimum pay rates above the federal level. Jose Luis Magana/AP hide caption 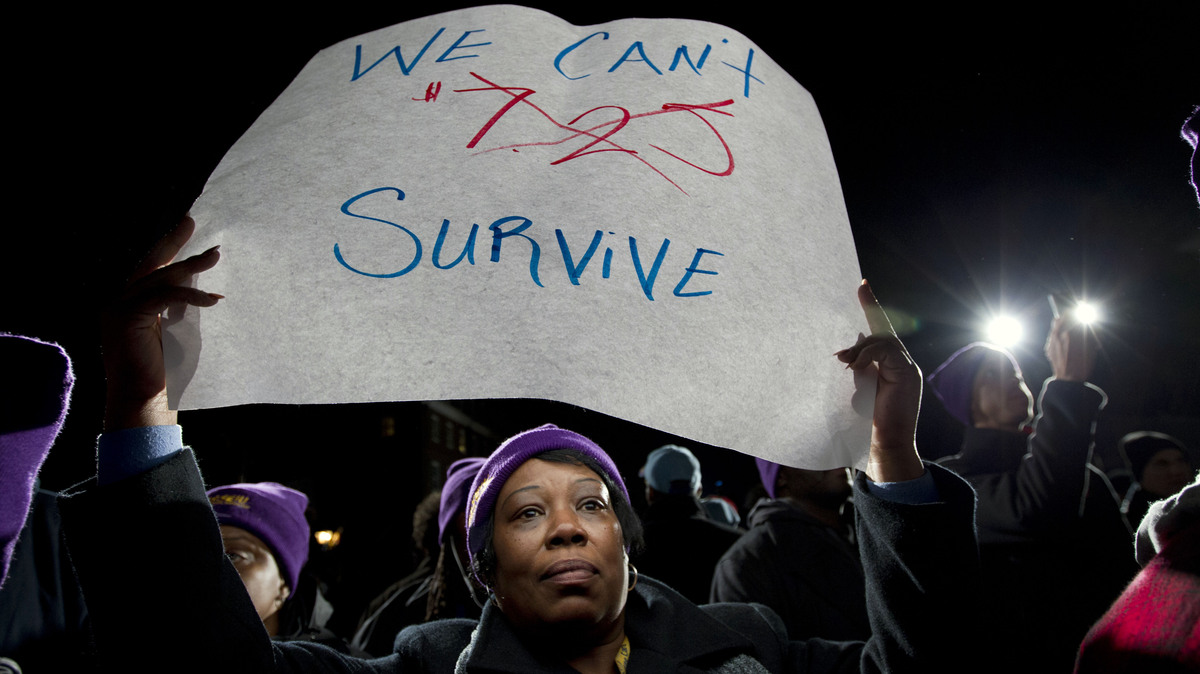 Darlene Handy of Baltimore holds up a banner at a rally supporting a pay measure in Maryland. More than 20 states have raised minimum pay rates above the federal level.

Whatever you already believed about raising the federal minimum wage, you now have more ammo for your argument, thanks to a report released Tuesday by the Congressional Budget Office, titled "The Effects of a Minimum-Wage Increase on Employment and Family Income."

And yes, you're right: The proposed raise would lift nearly 1 million Americans out of poverty and put billions into the wallets of workers who are eager to spend, the CBO says.

And yes, liberals and conservatives are scrambling to spotlight passages of the report that support their respective political positions.

The White House jumped on the CBO's conclusion that if Congress were to raise the federal minimum wage from $7.25 an hour to $10.10, then 16.5 million low-wage workers would get bigger paychecks, which could help stimulate slack consumer demand.

"It raises incomes and reduces poverty," Jason Furman, chairman of the president's Council of Economic Advisers, said on a phone call with journalists.

But while Furman was highlighting the positives, Republicans were pointing to the CBO's conclusion that a $10.10 wage would cause business owners to eliminate about 500,000 jobs to save on labor costs.

"With unemployment Americans' top concern, our focus should be creating — not destroying — jobs for those who need them most," Brendan Buck, a spokesman for House Speaker John Boehner, R-Ohio, said in a statement.

Democrats are calling a wage hike one of their top priorities. And polls consistently show the great majority of Americans support that position. Already, 21 states and many cities have imposed higher minimum wages — even as Congress holds the federal wage at the level last increased in July 2009.

But Republican members of Congress say a higher minimum wage would hurt small businesses and eliminate jobs for those who need them most, namely the lowest-skilled workers.

Here are some of the pluses and minuses of a wage hike, as the CBO sees it:

Positive Impacts Of A Higher Wage

- After taking into account jobs cut and raises paid out, real income would rise overall by $2 billion.

- The wage boost would allow millions of workers to spend more, boosting demand for goods and services and stimulating growth.

Negative Impacts Of A Higher Wage

- Roughly 500,000 people would lose their jobs as employers cut payrolls to cope with higher labor costs.

- The federal budget would feel a pinch as the government raises wages for hourly employees. And the government may have to pay more for goods and services as suppliers charge higher prices to adjust to higher wages.

- Consumers could face rising prices as employers pass along some of their increased labor costs.