Accessibility links
5 Things To Know About Venezuela's Protest Leader : The Two-Way Leopoldo López has reemerged as an important opposition figure. And like he has in the past, he's courted controversy. 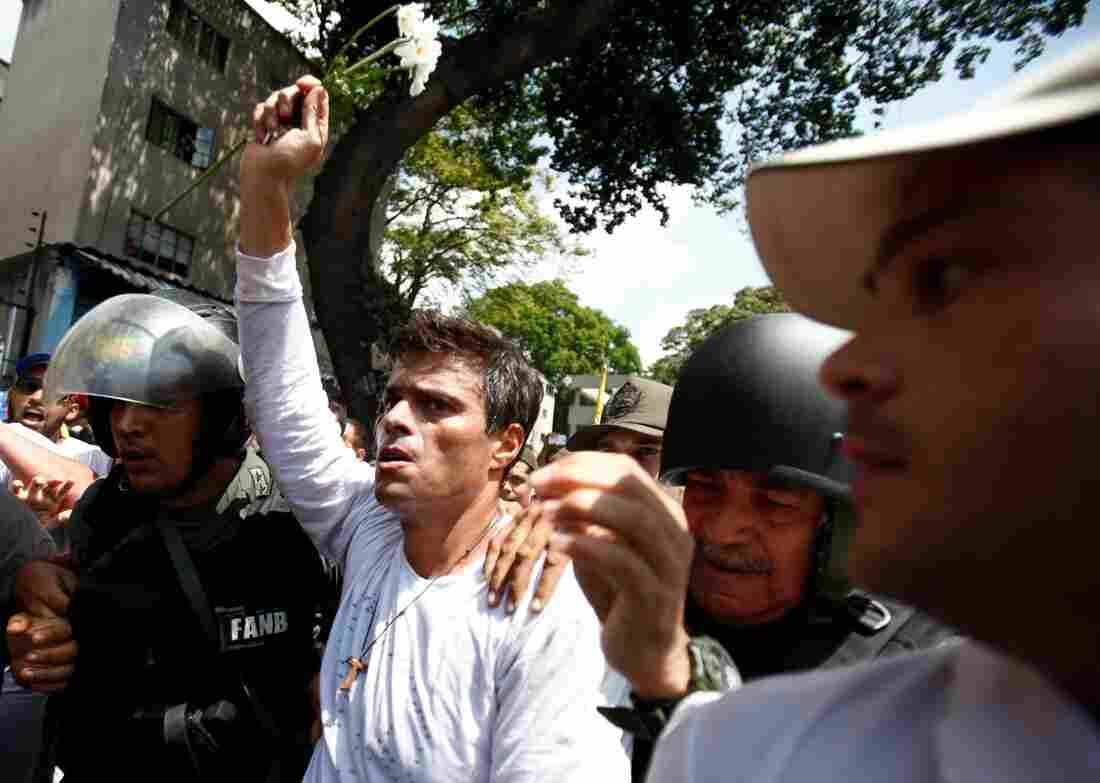 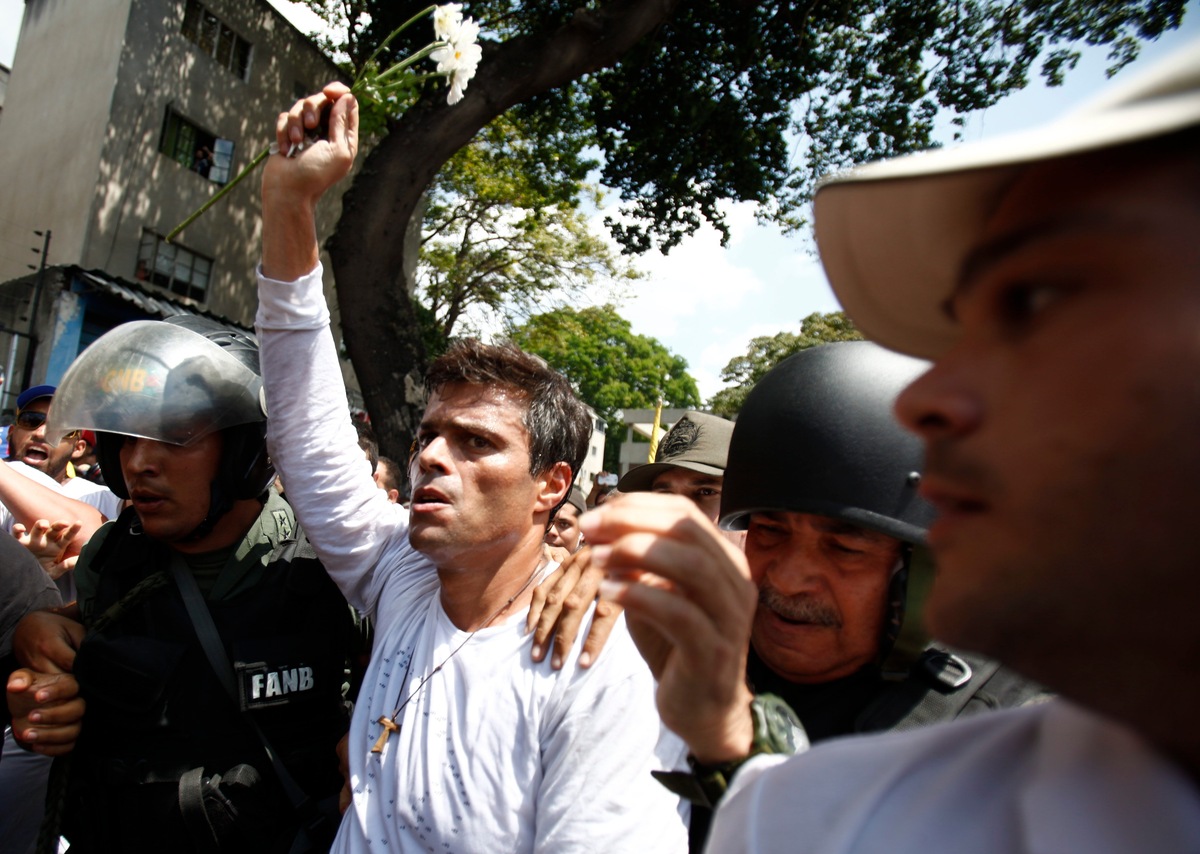 If you've been following the crisis in Venezuela only peripherally, the name Leopoldo López must've come as a surprise.

During a major protest on Tuesday, he turned himself in to authorities in dramatic fashion. This picture of him saying goodbye to his wife cemented his place as the face of the opposition to the government of Nicolas Maduro: 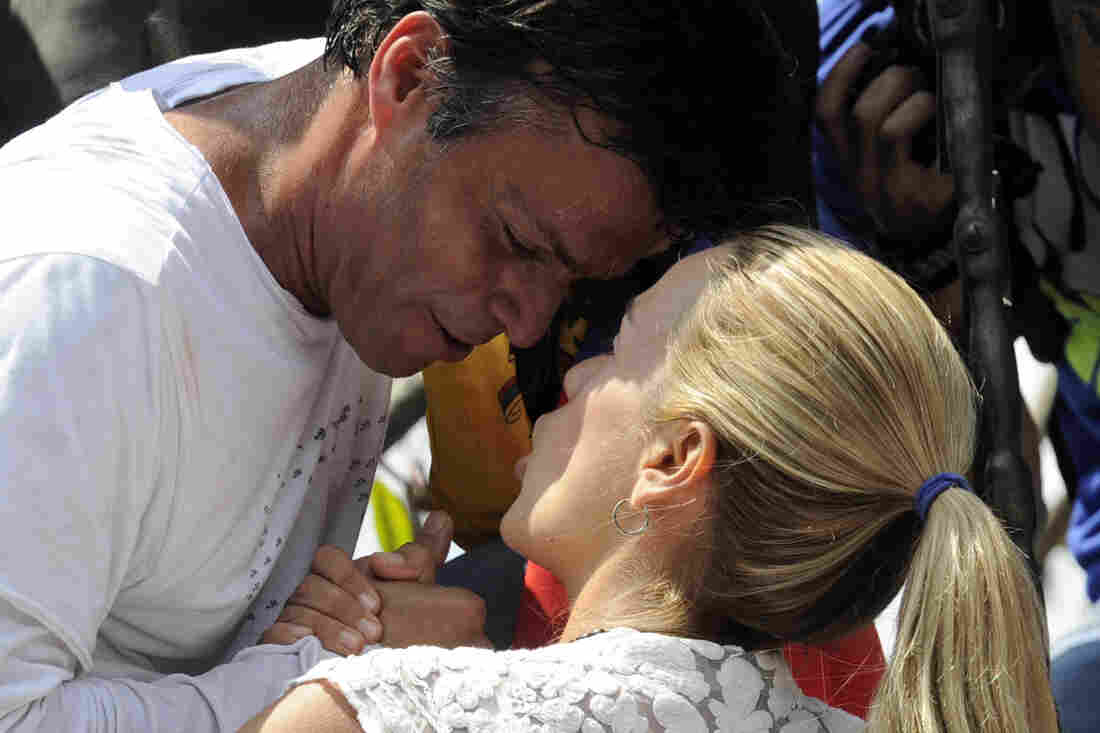 Leopoldo López, an ardent opponent of Venezuela's socialist government facing an arrest warrant after President Nicolas Maduro ordered his arrest on charges of homicide and inciting violence, kisses his wife Lilian Tintori, before turning himself in to authorities on Tuesday. Leo Ramirez/AFP/Getty Images hide caption 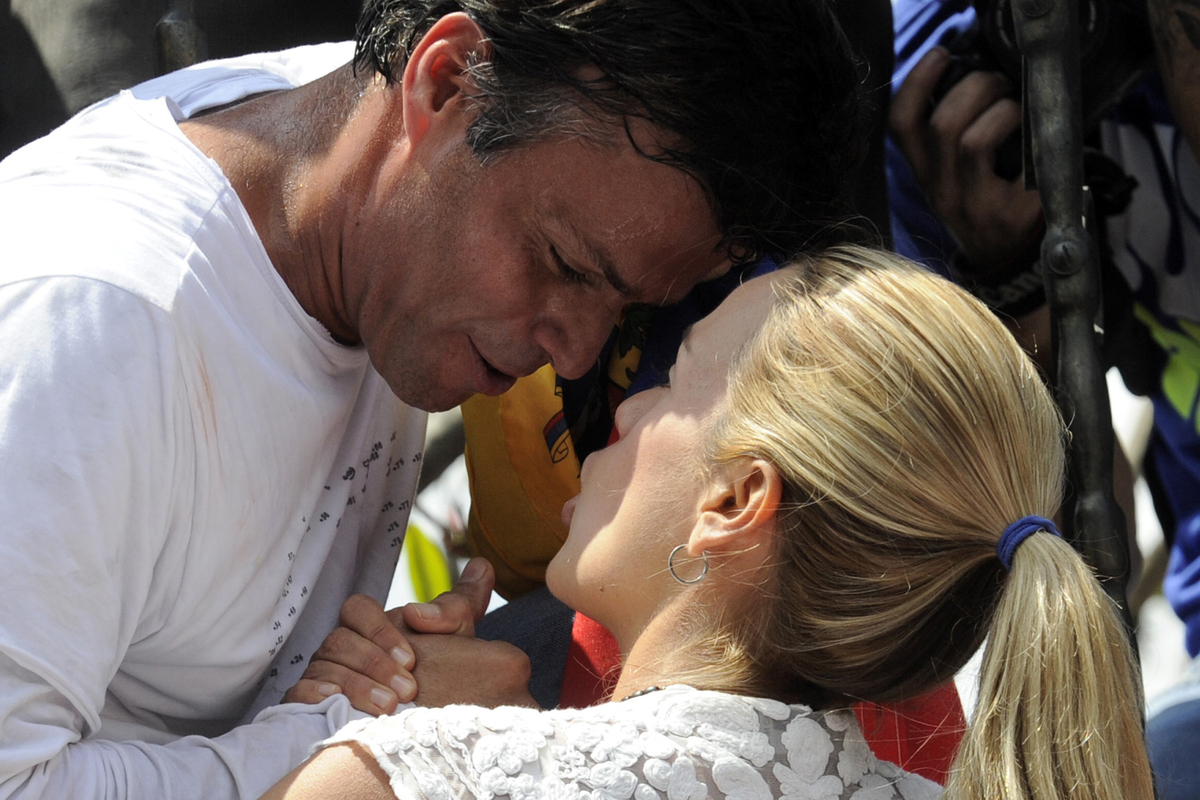 Leopoldo López, an ardent opponent of Venezuela's socialist government facing an arrest warrant after President Nicolas Maduro ordered his arrest on charges of homicide and inciting violence, kisses his wife Lilian Tintori, before turning himself in to authorities on Tuesday.

It meant that López has, for now, replaced Henrique Capriles, who ran against Hugo Chávez and Maduro in presidential elections, as the symbolic head of the opposition.

But López is not new to this scene. Here are five things that will help you understand the conflict in Venezuela and who López is:

1. He comes from an impressive lineage. According to a 2008 profile by organization City Mayors:

"López could be said to enjoy membership of the country's European political elite from birth and lineage alone. The great-great-great-great-great nephew of national liberator and second president Simon Bolivar, López is also the grandson of former cabinet member Eduardo Mendoza Goiticoa and the great-grandson of the first president, Cristobal Mendoza."

The connection to Bolivar is, of course, ironic, because he is opposing the government that launched what it termed a "Bolivarian revolution."

López couldn't be more different than Chávez, who rose from a working-class family to the presidency. López was born rich and was educated at Harvard and at Kenyon College in Ohio.

2. López really got the attention of Chavez's party when he became the mayor Chacao, the wealthiest district of Caracas, in 2000. From then on, he has challenged the government on all fronts. It culminated in an attempted coup against Chávez in 2002.

As The Los Angeles Times explained in 2006, López tried to distance himself from the attempted coup, but it was clear he orchestrated the public protests against Chávez and he played a central role in the citizen's arrest of Chavez's interior minister, Ramon Rodriguez Chacin.

3. As a result of his opposition, López was allegedly targeted by the Chávez government. As Times reports, the government "filed 26 criminal charges against him," and in 2006 he was barred from seeking public office.

In 2009, the Inter-American Court of Human Rights ruled Venezuela had violated López's rights when they issued that sanction.

4. Lopez has always been a controversial figure, even among the opposition. In a 2009 diplomatic cable for example, the U.S. embassy included a bit labeled "The Lopez 'Problem.'" They wrote:

"Former Chacao Mayor Leopoldo Lopez has become a divisive figure within the opposition, particularly since his very public split with UNT in September. He is often described as arrogant, vindictive, and power-hungry — but party officials also concede his enduring popularity, charisma, and talent as an organizer. PJ's Ponte said she had worked for Lopez when he was mayor and was impressed by his ability to organize his staff and effectively implement programs. Nevertheless, she said he summarily fired her when her husband opposed Lopez during an internal party conflict while he was still a member of PJ."

5. López bowed out of the 2012 contest against Hugo Chávez when he threw his support to Capriles.

Capriles, however, went on to lose that election and after Chávez died, he also lost the election against Maduro. That brings us to today.

As Mark reported, Venezuela is in turmoil. Specifically, as Bloomberg Businessweek explains, the economy is in shambles, "with inflation hitting 56 percent, the budget deficit soaring by almost 50 percent, China cutting back on its lifeline $20 billion loan, and Moody's and Standard & Poor's downgrading Venezuelan bonds to junk status."

As the BBC reports, without elections due for a while, Capriles has taken a different approach than López:

"Mr Capriles has opted to seek dialogue with Mr Maduro, shaking hands with his bitter rival in public.

"Mr Capriles has since tried to gather support among those who voted for the government, a strategy which has put him at loggerheads with Mr Lopez, who is advocating tougher action against the administration.

"Using social media, Mr Lopez has founded a movement using the hashtag #lasalida, which in Spanish means both 'the exit' and 'the solution.'"

Capriles, however, joined the march on Tuesday and has been speaking out against the government on Twitter.

"We are on the path to economic collapse," he tweeted yesterday. "It's clear that's why the government doesn't want a peaceful protests. Instead, it wants to infiltrate it and show it to be violent."

López is in jail, now, accused of fomenting a coup against Maduro.