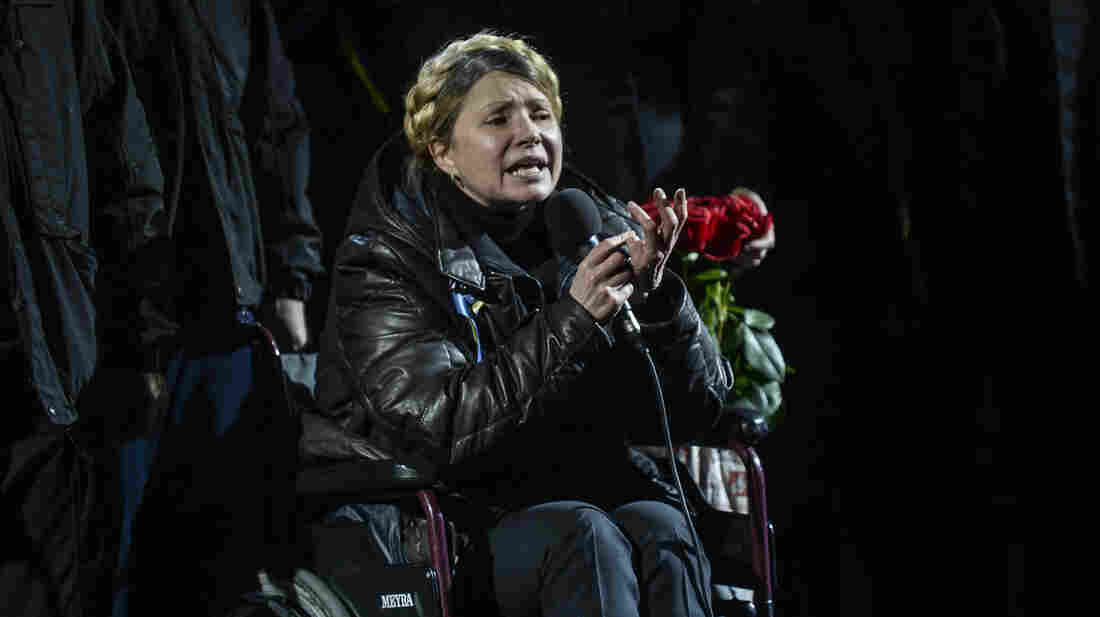 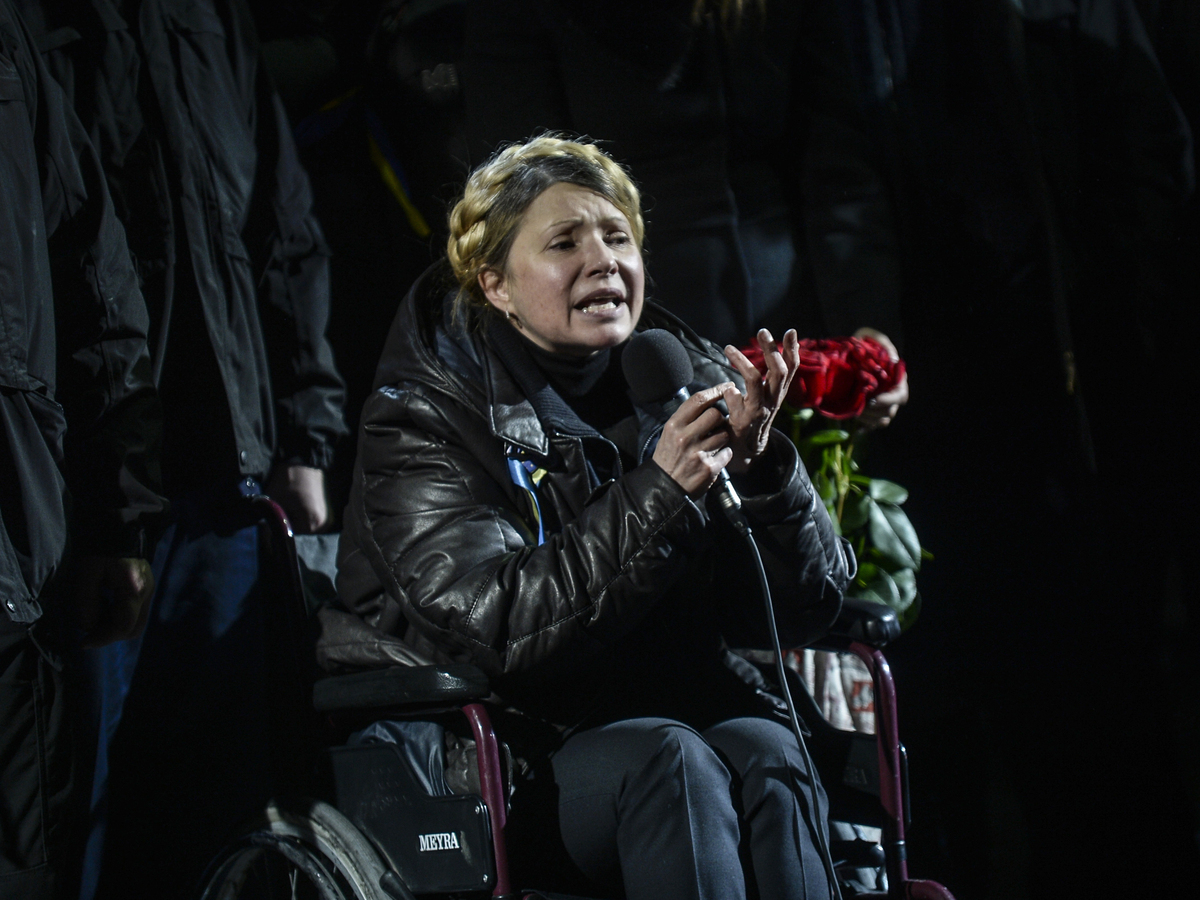 Ukraine's parliament has voted to push President Viktor Yanukovych out of office hours after he fled the capital and denounced events in the country as "a coup d'etat" in a television interview.

The legislature also voted to release Yanukovych's jailed arch-rival, former Prime Minister Yulia Tymoshenko. Reuters reports that the 53-year-old ex-premier, who had been held in a hospital under prison guard since 2011 for abuse of office over a gas deal with Russia — a charge widely viewed by her supporters as politically motivated — was freed shortly after the vote. 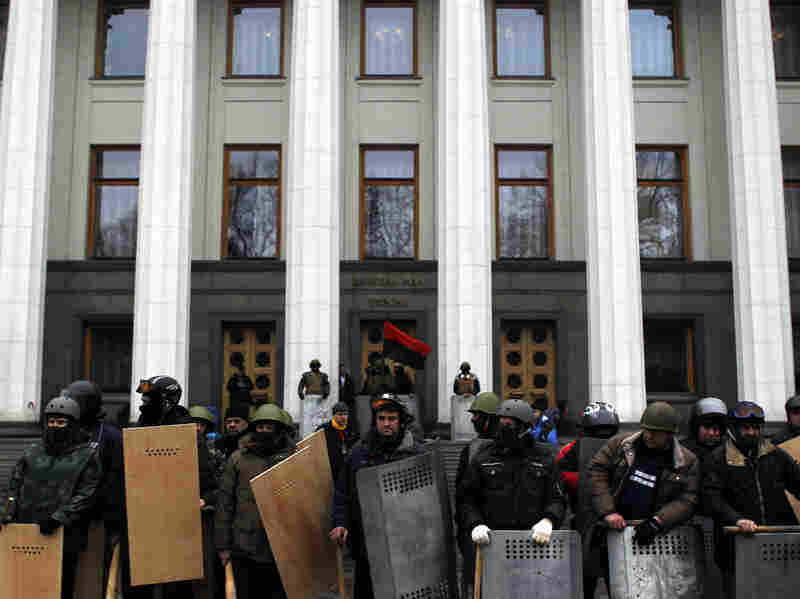 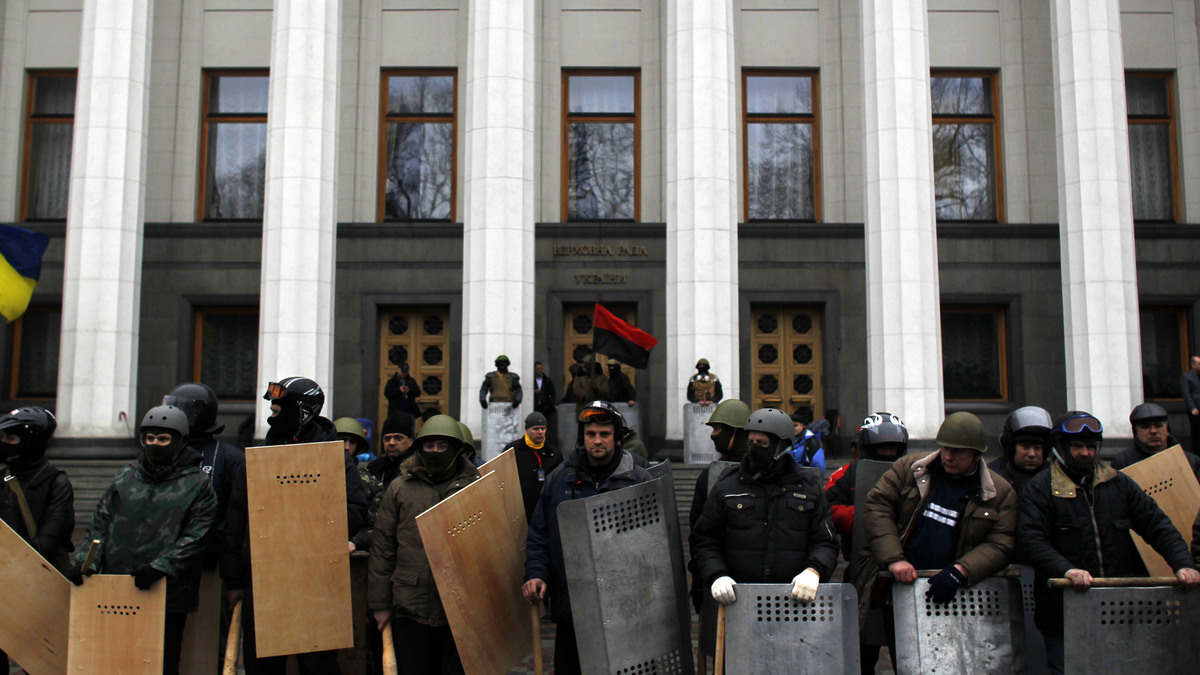 Anti-government protesters stand guard in front of Ukraine's parliament in Kiev on Saturday.

Speaking after her release, Tymshenko said the ouster of Yanukovych amounted to the fall of a dictator.

"Our homeland will from today on be able to see the sun and sky as a dictatorship has ended," she told reporters.

"Each drop of blood was not spilled in vain," she said referring to the deaths of some 77 protesters in violence in recent days.

Tymoshenko, who later addressed a crowd in Kiev, called the opposition supporters gathered to greet her, called them "heroes."

"You are the best thing in Ukraine!" she said.

Tymoshenko's remarks followed a vote in parliament to consider Yanukovych "resigned." The body also voted to hold new presidential elections on May 25.

Meanwhile, the opposition appeared to be in control of key government buildings in Kiev, as well as Yanukovych's own residence.

Yanukovych, speaking to Ukrainian television from Kharkiv, in Ukraine's Russian-speaking east, said: "The events witnessed by our country and the whole world are an example of a coup d'etat."

"My car was shot at. I am not afraid. I feel sorrow for my country," he told UBR television.

Yanukovych compared the situation to what happened in Germany in the 1930s when Nazi leader Adolf Hitler came to power.

"I did everything to avoid the violence on the streets of Ukraine," he said. "We took all possible steps to stabilize the political situation in country. But what happened, happened." 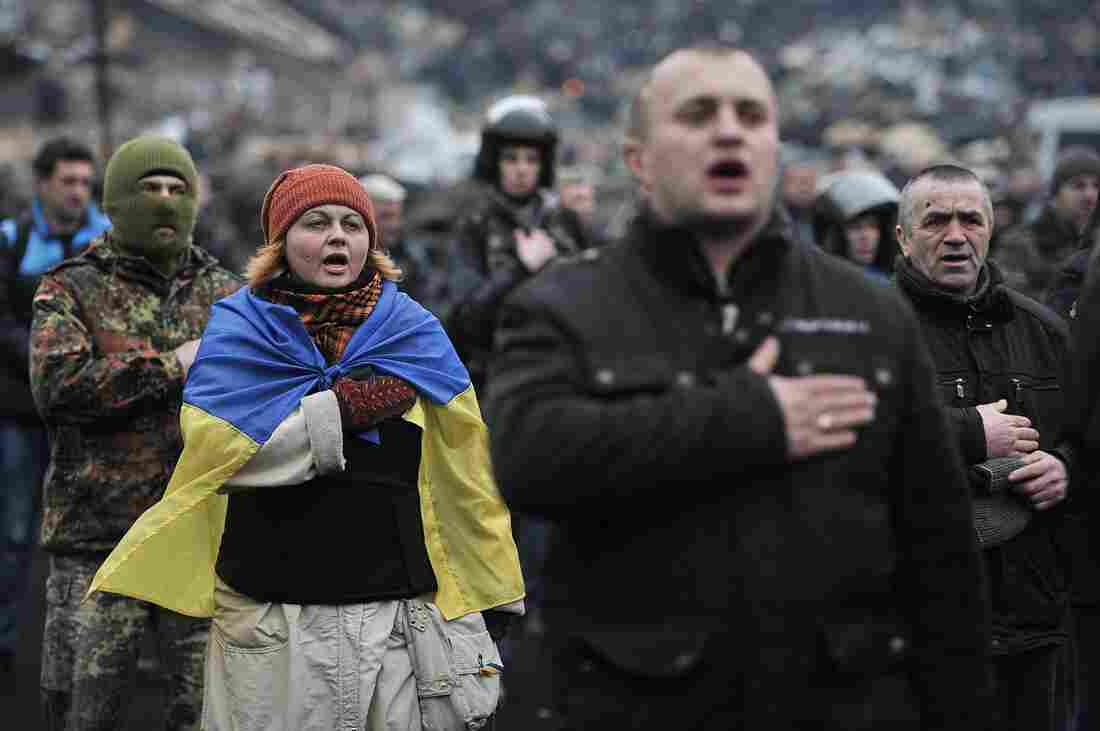 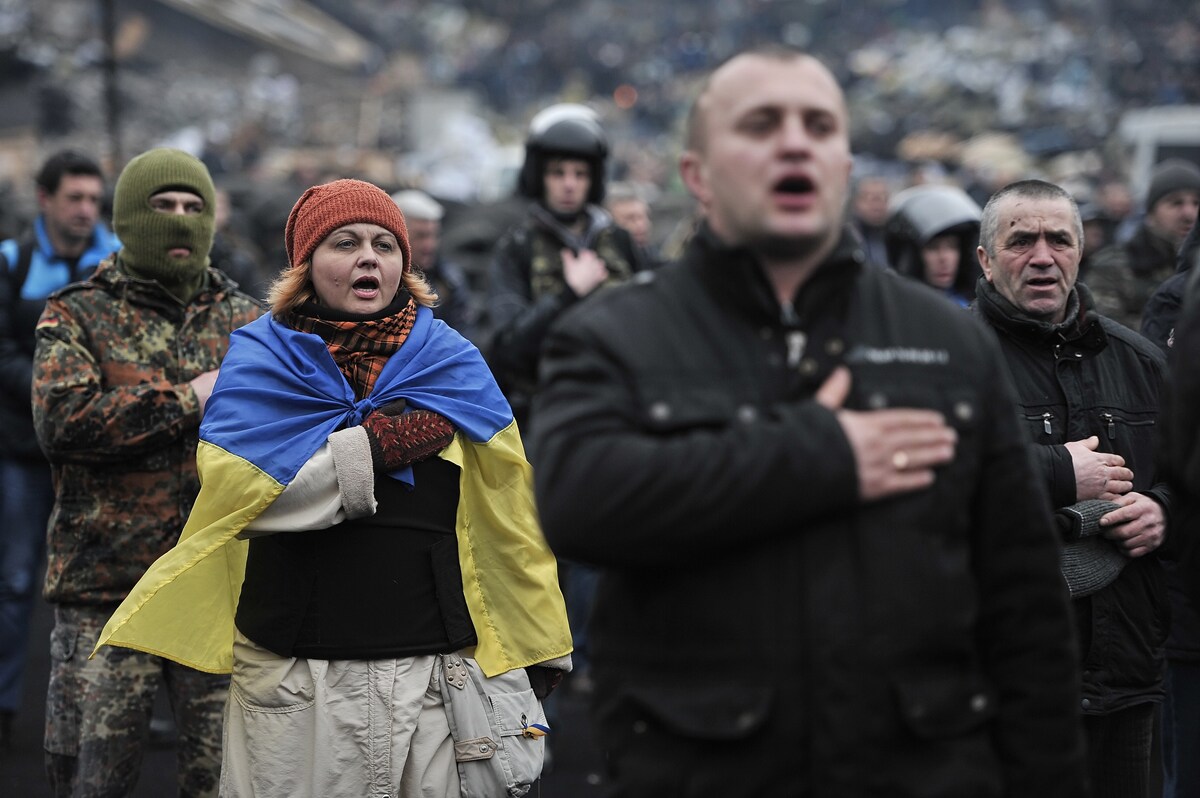 In the past, Yanukovych repeatedly refused calls to resign despite months of anti-government protests and deadly clashes between protesters and security forces.

Saturday's dramatic turn of events came hours after a deal was forged with the opposition to end the bloodshed.

The peace deal reached Friday calls for early elections to be held in December and limits presidential powers. Some in the opposition had rejected the deal because it did not demand Yanukovych's immediate resignation, the BBC says.

Yanukovych's flight came close on the heels of word Saturday that parliamentary speaker Volodymyr Rybak, a political ally of the embattled president, cited ill health in announcing his own resignation.

Reuters reports that the heads of four Ukrainian security branches appeared in parliament on Saturday and vowed not to take part in any conflict with the people.

According to the BBC, protesters had been able to enter offices and even his home after they were abandoned by police.

The BBC's Kevin Bishop was able to walk straight into the courtyard. "Protesters are standing in the grounds of the building in disbelief," the BBC reports.

NPR's Soraya Sarhaddi-Nelson reports from the capital that Yanukovych's home "has been suddenly opened to the public.

"He has this palatial estate on the outskirts of Kiev, where he allegedly has a golden toilet, and this is where the public and journalists are being allowed in," she says.

The anti-government protests were first sparked in November when Yanukovych rejected a key trade deal with the European Union in favor of closer ties with Moscow. During the Cold War, Ukraine had been firmly under Soviet control and only regained its independence in 1991.

The White House on Saturday issued a statement saying the United States is "closely monitoring" developments in the Ukraine.

"We have consistently advocated a de-escalation of violence, constitutional change, a coalition government, and early elections, and today's developments could move us closer to that goal," the statement reads.