Accessibility links
Killers Were Tiny, Victims Were Huge At Chile's Whale Graveyard : The Two-Way Millions of years ago, dozens of the massive sea creatures washed ashore. Their fossils were discovered in 2011. Scientists have worked to figure out what killed them. Now they have an answer.

Killers Were Tiny, Victims Were Huge At Chile's Whale Graveyard

Killers Were Tiny, Victims Were Huge At Chile's Whale Graveyard 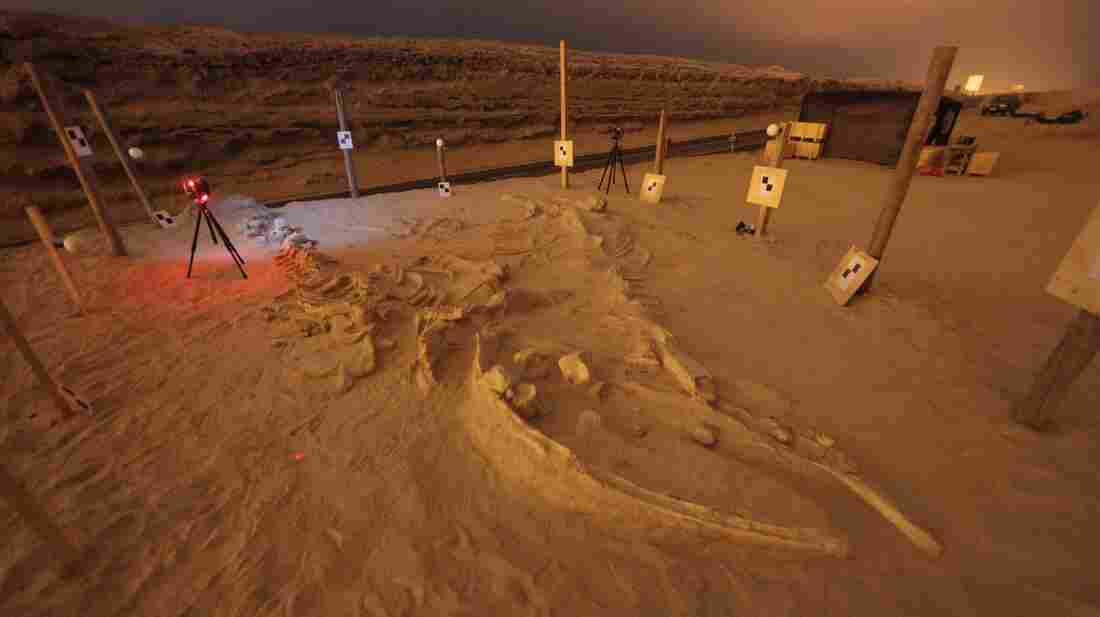 The fossilized remains of a whale that washed up on a shore in what's now Chile more than 5 million years ago. Vince Rossi/Smithsonian Institution hide caption 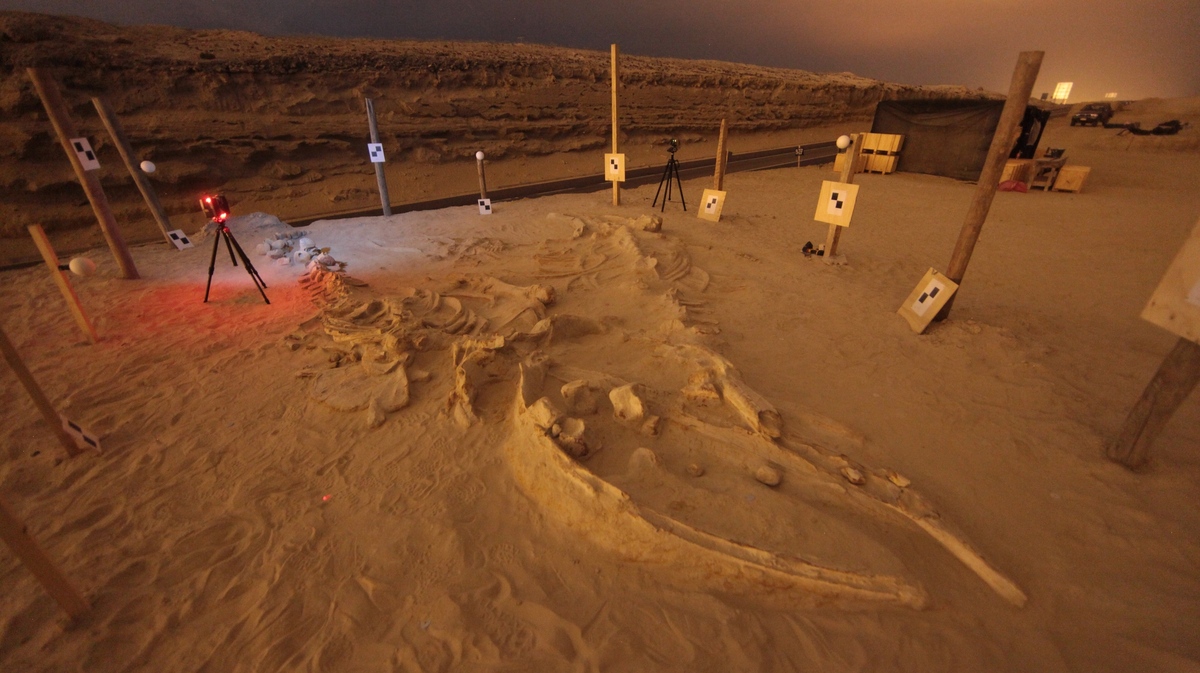 The fossilized remains of a whale that washed up on a shore in what's now Chile more than 5 million years ago.

Since construction workers discovered dozens of fossils along a highway in Chile in 2011, one question has preoccupied researchers:

What killed the whales, seals and other creatures that ended up there more than 5 million years ago?

Writing in Proceedings of The Royal Society B, scientists from the Smithsonian Institution and universities in the U.S. and Chile say the culprits were among the smallest possible killers: "Algal toxins."

Or, as the Smithsonian's Nick Pyenson tells National Geographic: Poisonous algae that the animals ingested led to their demise.

The site, which the BBC says contains "one of the most astonishing fossil discoveries of recent years," is a little more than half a mile from the current shoreline of the Pacific Ocean near the Chilean port city of Caldera, 440 miles or so north of Santiago.

Millions of years of since they wound up there, the animals' bones are now well above sea level.

According to Smithsonian Magazine:

"At least 30 baleen whales died, their bodies washed onto a tidal mudflat and buried over time. Species of sperm whale and a walrus-like whale, both now extinct, also died, along with seals, billfishes, bony fish and aquatic sloths. These die-offs, known as mass strandings, appeared to have happened over and over, with the animals buried in sediment between each episode.

Among the clues to what killed the creatures is the way the fossils are arranged. It appears the animals were belly-up when they came ashore. That's a sign, the researchers write, that they "washed in dying or dead and were then buried."

"Whales are generally only belly-up if they arrive at someplace dead," Pyenson tells Smithsonian. "This is a graveyard, it's not a murder site — the murder happened elsewhere."

With that evidence in hand, the scientists compared the site to mass strandings of whales and other sea creatures in recent years and found them similar. And in those recent mass kills, algal blooms were to blame.

So, what caused the algal bloom that led to the mass grave in Chile? According to Smithsonian:

"In modern times, algal blooms can be triggered by human activities (fertilizer-laced water runoff, for instance) but also by the natural discharge of minerals such as iron into water, which feeds the explosive growth of algae. The Chilean coast nearby ... as it happens, is chock full of iron deposits, and sudden rain in the arid region can carry it into the ocean via runoff." 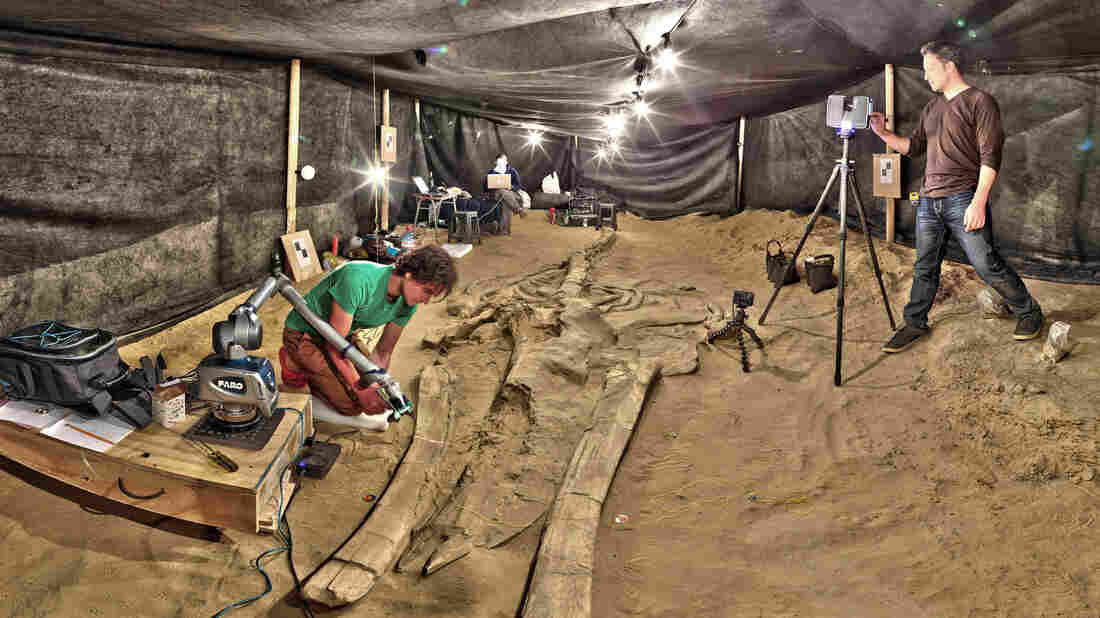 Adam Metallo, left, and Vince Rossi from the Smithsonian's Digitization Program use a high-resolution laser arm and medium-range laser scanners to document one of the most complete fossil whales at the site in Chile. Smithsonian Institution hide caption 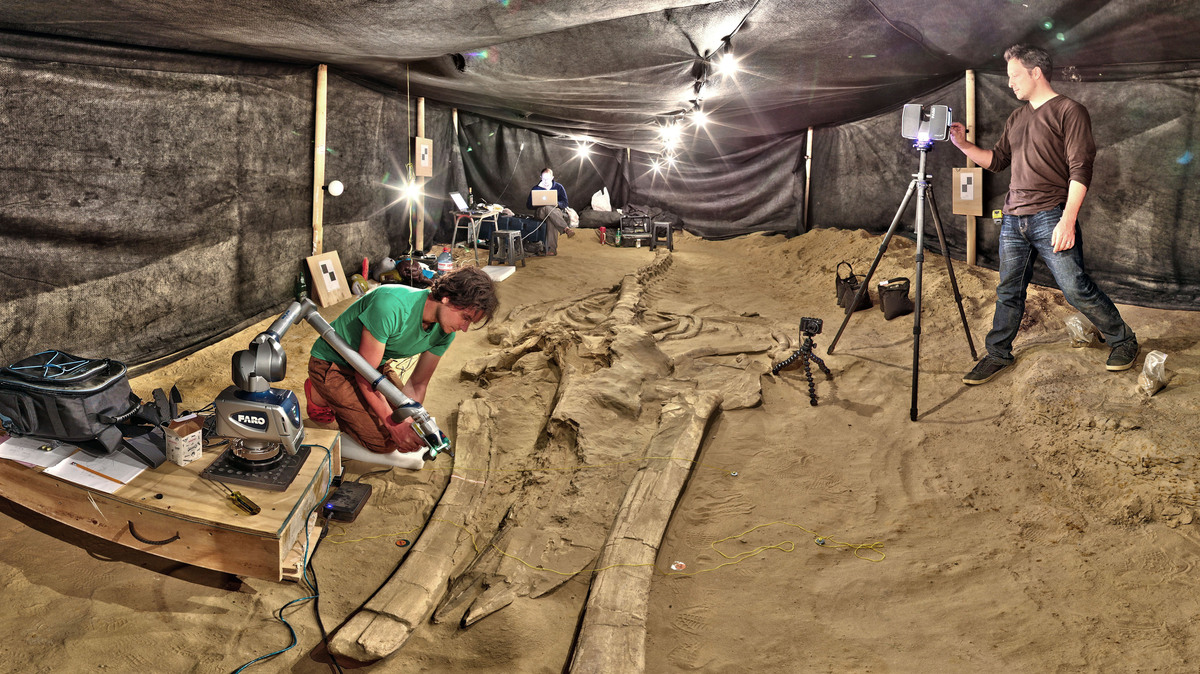 Adam Metallo, left, and Vince Rossi from the Smithsonian's Digitization Program use a high-resolution laser arm and medium-range laser scanners to document one of the most complete fossil whales at the site in Chile.