Accessibility links
Kerry Will Travel To Kiev Amid Escalating Crisis : The Two-Way The secretary of state's trip comes as Ukraine's week-old government scrambles to mobilizing reserves in the face of Moscow's military incursion into the Crimea peninsula.

Kerry Will Travel To Kiev Amid Escalating Crisis

Kerry Will Travel To Kiev Amid Escalating Crisis 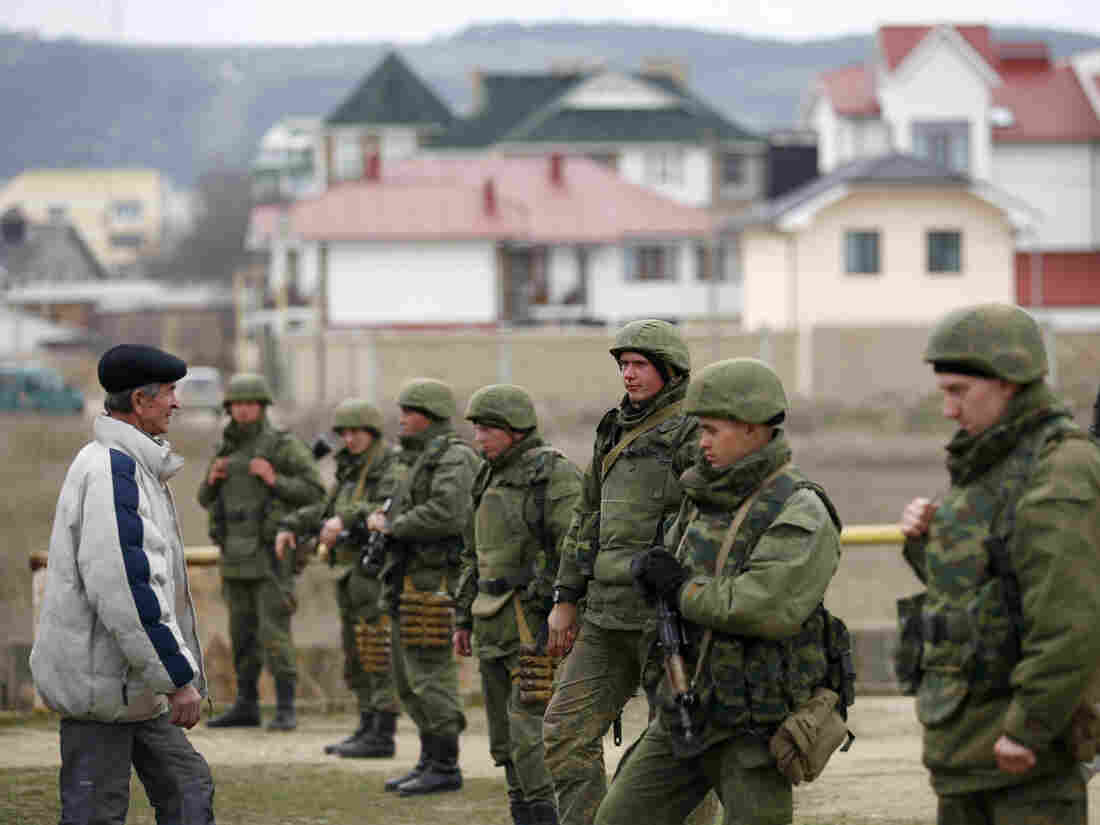 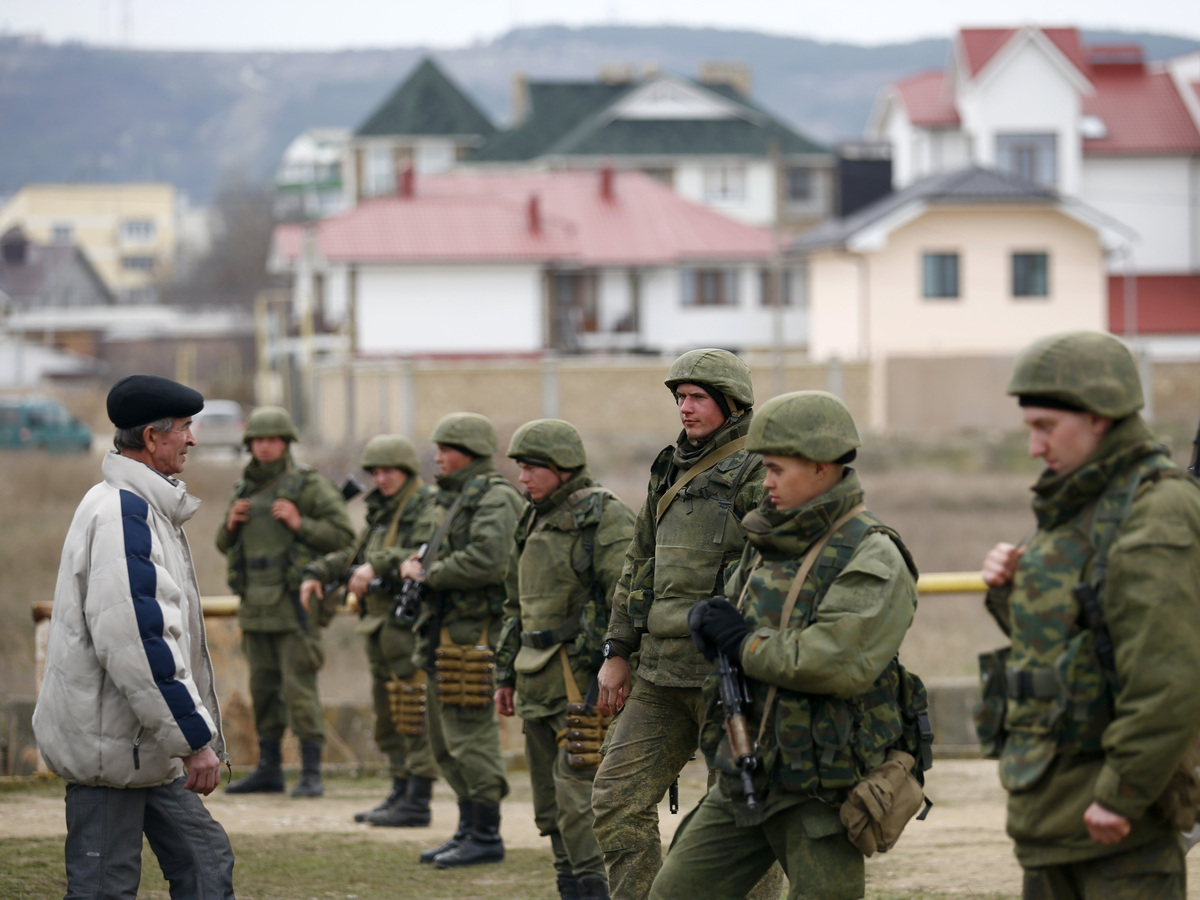 Ukrainian military personnel stand guard in the Crimean port city of Feodosia on Sunday. Ukraine is mobilizing for war, calling up reserve troops.

Secretary of State John Kerry, who has described Moscow's military intervention in the Crimea an "incredible act of aggression," will travel to Ukraine's capital on Tuesday to meet with the country's embattled government.

U.S. State Department spokesperson Jen Psaki said in a statement late Sunday that Kerry "will meet with senior representatives of Ukraine's new government, leaders of the Rada [Ukraine's parliament], and members of the civil society."

The statement follows a day in which Ukraine's week-old government warned Russia that the two countries "are on the brink of disaster" after Kremlin troops entered Crimea last week, sparking one of the worst international crises since the end of the Cold War.

"There was no reason for the Russian Federation to invade Ukraine," Yatsenyuk said after a closed session of his new parliament in Kiev. He called Russia's military intervention a "declaration of war" against his country.

Kerry suggested earlier Sunday that expelling Russia from the G8 and "asset freezes" were among the possible sanctions that could be imposed for Russia's "incredible act of aggression."

On Sunday, U.S. and European leaders stepped up their denunciations of Moscow's move to seize the autonomous region that remains home to Russia's Black Sea fleet despite Ukrainian independence in 1991. There are also reports that partisans, possibly aided by Moscow, are on the move elsewhere in Ukraine's Russian-speaking east.

Moscow's military moves began on Thursday after last week's ouster of Ukraine's pro-Russia President Viktor Yanukovych. Yanukovych was forced out after months of anti-government demonstrations opposing his vision for the country's economic and political future. He subsequently fled to Russia.

As tensions grew on Sunday, NPR's Emily Harris, reporting from Kiev, said that thousands of people had gathered in the the city's Independence Square to protest Russia's incursion.

Even so, she says, many of the people at the pro-Ukraine rally did not think the situation would lead to all-out war with Russia.

Sydir Kyrai was one of many people at the rally who told Harris that he did not think war over Crimea was inevitable.

"To start a war in the 21st century is completely crazy," Kyrai said.

On Saturday, Russian lawmakers approved an appeal from Putin to authorize the use of force in Ukraine until such time that "the political situation is normalized" in what amounted to a justification for the troops already sent and a blank check for any future deployments.

Ukraine's new and untested government, still finding its feet after barely a week in power, has responded with a nationwide mobilization of troops.

The BBC says the decree authorizes "full combat readiness," the setting up of emergency headquarters and increased security at key sites, including nuclear plants.

On the ground in Ukraine, the military situation is confusing, but the BBC reports seeing what appear to be Russian troops digging trenches along the Crimean border — a possible signal that Moscow does not intend a quick withdrawal.

There were reports that about 100 Ukrainian marines were surrounded on Sunday in the Crimean port city of Feodosia by unidentified armed men who have demanded that the garrison pledge loyalty to pro-Russian authorities.

The BBC also reports that:

"[Two] Russian anti-submarine warships have appeared off the coast of Crimea in violation of an agreement governing the presence of Russia's Fleet in the peninsula."

"Russian soldiers are widely reported to be guarding a number of administrative buildings and military bases in Crimea. Parliament, airports, the state television building and telecommunications hubs have also been surrounded."

NATO Secretary General Anders Fogh Rasmussen said the allies will "coordinate closely" on the situation in Ukraine, which he termed "grave."

"What Russia is doing now in Ukraine violates the principles of the United Nations charter. It threatens peace and security in Europe," Rasmussen told reporters in Brussels ahead of a meeting of NATO ambassadors, according to The Associated Press. After the North Atlantic Council meeting he said the alliance had "made clear that we stand by Ukraine as a valued partner."

On Sunday, Kerry told the CBS program Face the Nation that Russia's actions threatened "very serious repercussions" from the Washington and its allies.

"You just don't in the 21st century behave in 19th century fashion by invading another country on a completely trumped up pre-text," Kerry said.

The U.S. and six other nations say they are suspending participation in the planning for an international summit in Russia this summer.

The White House issued the joint statement Sunday evening on behalf of the Group of Seven. That's the U.S., Canada, France, Germany, Italy, Japan, and the United Kingdom. The nations also participate in the Group of Eight economic group, which includes Russia.

The statement calls Russia's actions a "clear violation of the sovereignty and territorial integrity of Ukraine."

The summit is scheduled to be held in June in Russia's Black Sea resort of Sochi, where the Winter Olympics just concluded a week ago.

Of Putin, Kerry said: "He is not going to have a Sochi G8, he may not even remain in the G8 if this continues."

"He may find himself with asset freezes, on Russian business, American business may pull back, there may be a further tumble of the ruble," Kerry said in an elaboration on possible sanctions.

The Associated Press quotes an unnamed senior administration official as saying that Kerry will travel to Ukraine on Tuesday to meet with government officials there.