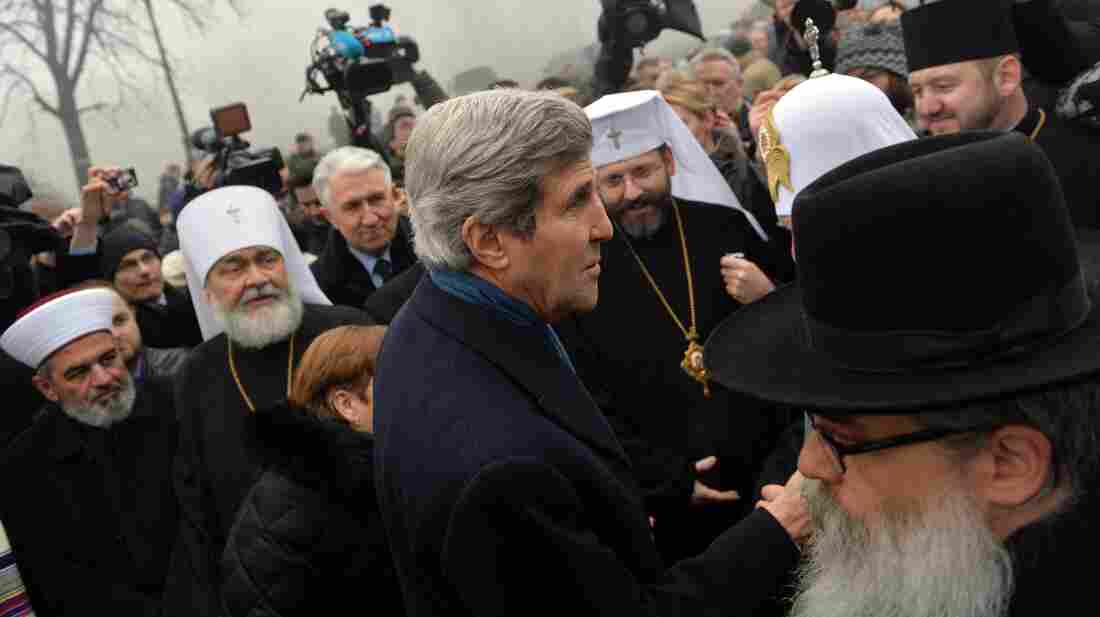 Secretary of State John Kerry speaks to religious leaders at the Shrine of the Fallen, a tribute to anti-government protesters, on Tuesday in Kiev, Ukraine. Sergei Supinsky/AFP/Getty Images hide caption 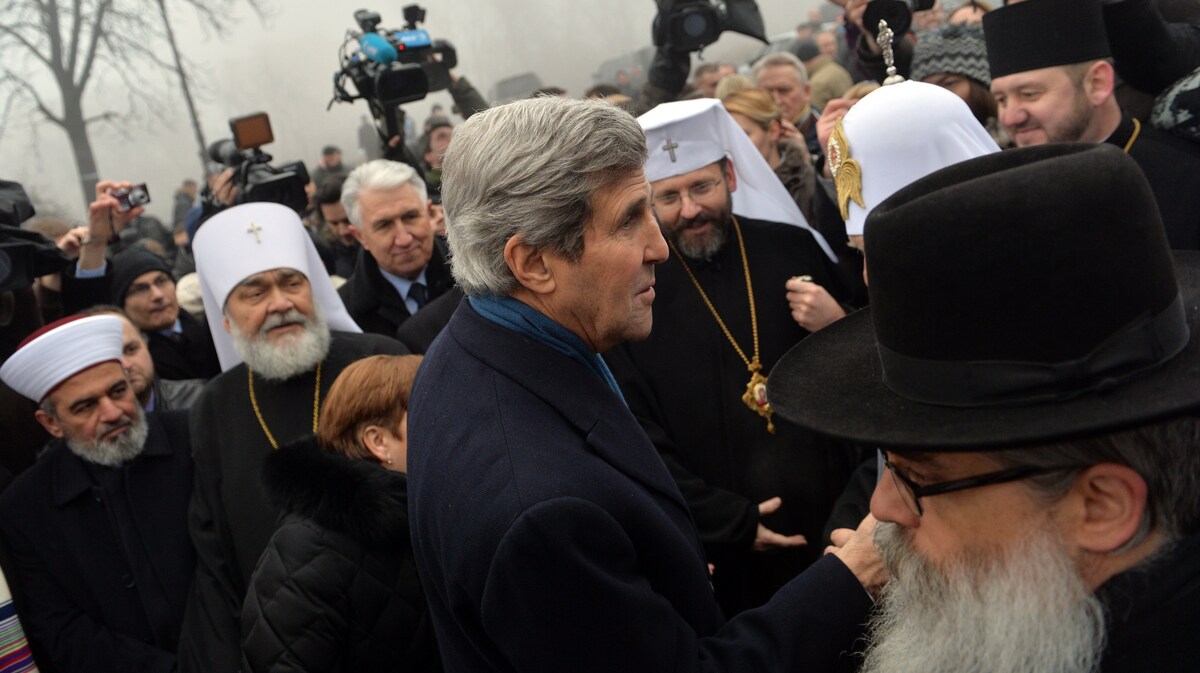 Secretary of State John Kerry speaks to religious leaders at the Shrine of the Fallen, a tribute to anti-government protesters, on Tuesday in Kiev, Ukraine.

Russia's explanation for its military response to the crisis in Ukraine doesn't match real events, President Obama and Secretary of State John Kerry said Tuesday. Speaking at news conferences held within moments of each other on different continents, they urged Russia to de-escalate the situation.

After unveiling his 2015 budget blueprint in Washington, D.C., the president was asked about Russian President Vladimir Putin's approach to the situation in Ukraine.

"There have been some reports that President Putin is pausing for a moment and reflecting on what's happened," Obama said.

Then he added that "there is a strong belief that Russia action is violating international law. ... President Putin seems to have a different set of lawyers doing a different set of interpretations. ... I don't think that's fooling anybody."

Obama spoke hours after Putin insisted his country's soldiers haven't occupied government buildings and surrounded Ukrainian military bases on the Crimean Peninsula. You can read about that and other developments in today's main post about Ukraine.

"Mr. Putin can throw a lot of words out there," Obama said, "but the facts on the ground" indicate that Russia is not acting in accordance with international principles about how to treat sovereign neighbors. Whatever interests Russia has in Ukraine, Obama said, they do not "give it the right to use force as a means of exerting influence."

As for the notion that "the Russian actions have been clever strategically," Obama said, "if anything it will push many countries further away from Russia."

Meanwhile in Ukraine, hours after landing in Kiev and meeting with leaders of the country's transitional government, Kerry used somewhat stronger terms than the president did in discussing the crisis.

Saying that people had "put themselves on the line" for Ukraine's future, Kerry said Ukrainians who had asked for their rights and for democracy had instead been met with snipers' bullets. He also said he spoke to several people who pleaded for help.

Kerry called the situation in Crimea "a new phase" of the confrontation.

"We condemn the Russian Federation's act of aggression," he said. And he praised "the restraint that the transitional government has shown" despite what he called an invasion.

The secretary of state outlined what he called a stark contrast between actual events in Ukraine and the Russian narrative about the clash.

Saying it was time to "set the record straight," Kerry said Russia has propagated an untrue version of events. He also faulted ousted Ukrainian President Viktor Yanukovych's response to the crisis.

Members of Yanukovych's own party voted for the country's current government and are well-represented within it, Kerry said. And he said that despite Russia's claims, there have been no reported crimes or recriminations directed against ethnic Russians in Ukraine.

"Not a single piece of credible evidence" supports the claims Russia has made about the situation in Ukraine, Kerry said. "None."

Kerry seemed surprised by a reporters's question about Putin's remarks earlier Tuesday, about the whereabouts of Russian soldiers. "He really denied there are troops in Crimea?" Kerry asked, interrupting the question.

The top U.S. diplomat said that if Russia is concerned about the safety of people in Ukraine, as Putin has said in the past, then it should engage with international groups and with the country's new government, to make sure those people are safe. He also called on Russia to return its troops to their barracks and "de-escalate" the situation.

Kerry said the U.S. is working to provide aid to Ukraine, from a $1 billion loan package to advice on repairing its economy and holding new elections in May.