Accessibility links
Russian Lawmakers Welcome Separatist Steps By Crimea : The Two-Way The U.S. has condemned any move by Crimea to split from Ukraine, saying that would violate international law. But Russia's parliament is vowing to support such a decision. 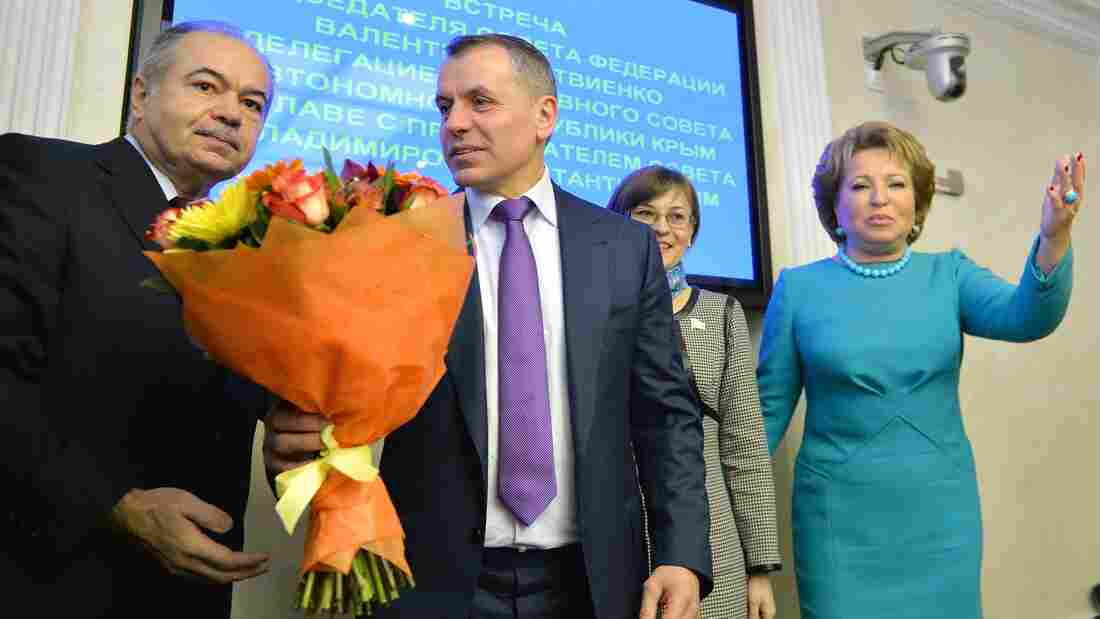 Vladimir Konstantinov (in purple tie) is the speaker of Crimea's parliament. He was welcomed with flowers Friday during his meeting with Valentina Matviyenko, speaker of Russia's upper house of parliament. She is at the far right of this photo. Yuri Kadobnov/AFP/Getty Images hide caption 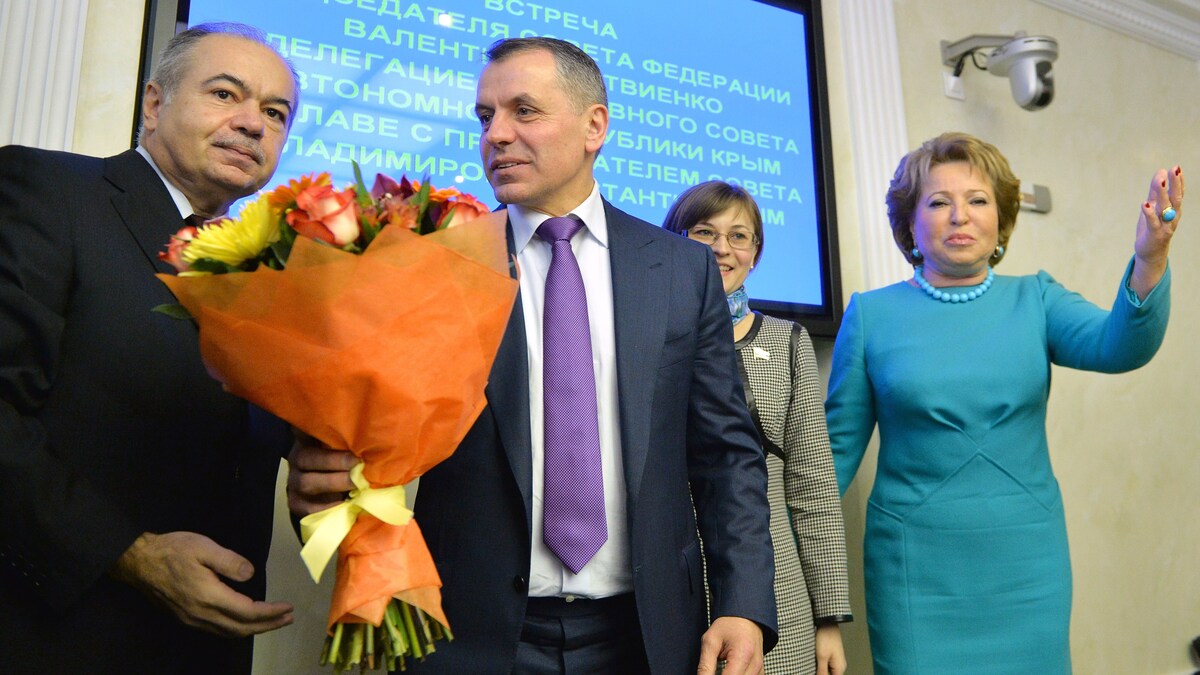 Vladimir Konstantinov (in purple tie) is the speaker of Crimea's parliament. He was welcomed with flowers Friday during his meeting with Valentina Matviyenko, speaker of Russia's upper house of parliament. She is at the far right of this photo.

One day after President Obama condemned steps taken by Crimea's parliament to leave Ukraine and join the Russian Federation, Russian lawmakers are welcoming such a move by Crimean separatists.

"Russia's parliament gave its defiant support Friday to Crimean lawmakers who want to see their region split from Ukraine and join Russia," CNN reports from Moscow.

A delegation from Crimea's parliament "was welcomed with applause" by the Russian parliament's lower house Friday, and the speaker of the upper house said Russia supports whatever decision the people of Crimea make, CNN adds.

Friday's news from Moscow underscored again how far apart the U.S. and Russian views of the crisis in Ukraine appear to be.

From KQED: 'Seven Short Videos That Help Make Some Sense Of The Conflict In Ukraine'

While it is part of Ukraine, Crimea is a largely autonomous region with its own parliament. The majority of its people are Russian-speaking. Russia maintains a large naval base on the Black Sea peninsula.

Since last month's ouster of Russia-leaning Ukrainian President Viktor Yanukovych, after several months of protests over alleged corruption and his decision to reject closer economic ties to the European Union, Crimea has been at the center of an international crisis.

Soldiers — who witnesses and reporters say are Russian troops but Russian officials insist are from local self-defense forces — have surrounded Ukrainian military posts in Crimea and have seized other strategic locations. No shots have been exchanged because Ukrainian troops have mostly stayed within their bases.

Obama and leaders from Europe have protested Russia's actions. Putin has said Russia is seeking only to protect the interests of ethnic Russians.

On Thursday, as we reported, Crimea's parliament voted to align with the Russian Federation and scheduled a March 16 public referendum on that issue. Ukraine's interim prime minister, Arseniy Yatsenyuk, called the Crimean lawmakers' action "an illegitimate decision" and said that "Crimea was, is and will be an integral part of Ukraine."

Obama said Thursday that "the proposed referendum on the future of Crimea would violate the Ukrainian constitution and violate international law." He also said the world is "well beyond the days when borders can be redrawn over the heads of democratic leaders."

Putin and Obama talked for about an hour by telephone Thursday. According to the White House, "President Obama emphasized that Russia's actions are in violation of Ukraine's sovereignty and territorial integrity." He also, the White House says:

According to Russia's RIA Novosti, Putin told Obama "that Ukraine's current government, brought to power by a revolution that ousted President Viktor Yanukovych last month, was illegitimate. He said that 'Russia cannot ignore [Crimea's] appeals for help in this regard,' but that it would act in full compliance with international law."