Accessibility links
Malaysian Jetliner Has Been Missing For More Than 24 Hours; Search Goes On : The Two-Way A Malaysia Airlines passenger jet had 239 people on board when it took off from Kuala Lumpur early Saturday. Families of those aboard are gathering near airports, fearing the worst.

Malaysian Jetliner Has Been Missing For More Than 24 Hours; Search Goes On

Malaysian Jetliner Has Been Missing For More Than 24 Hours; Search Goes On 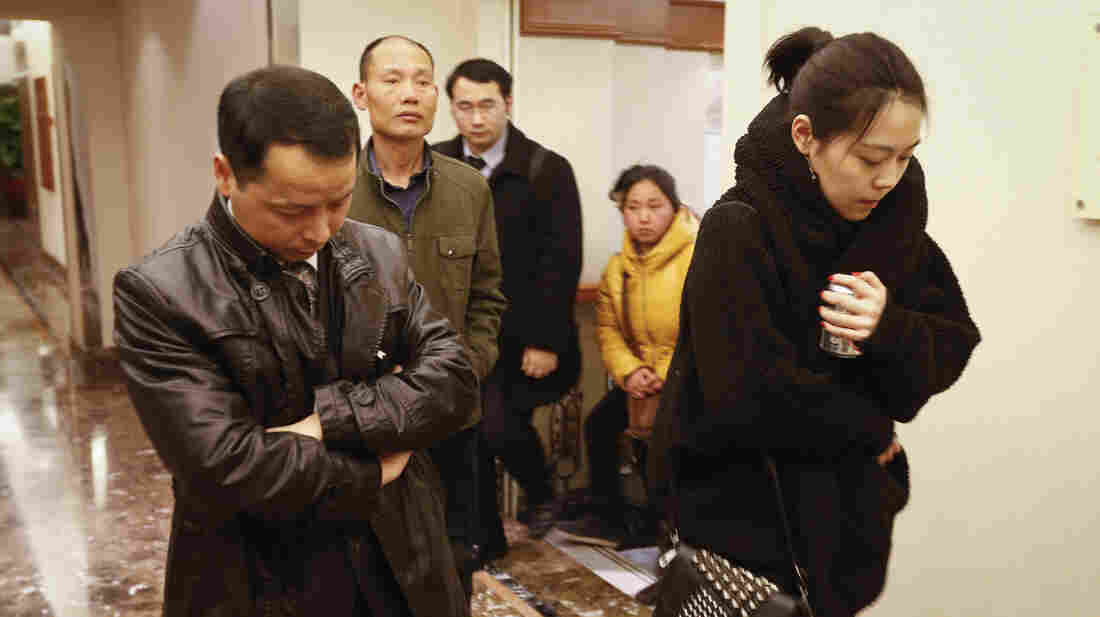 Family members arrive at a hotel for loved ones of passengers aboard a missing Malaysia Airlines jet in Beijing Sunday. Search teams across Southeast Asia scrambled on Saturday to find a Malaysia Airlines Boeing 777 with 239 people on board that disappeared from air traffic control screens over waters between Malaysia and Vietnam. Vincent Thian/AP hide caption 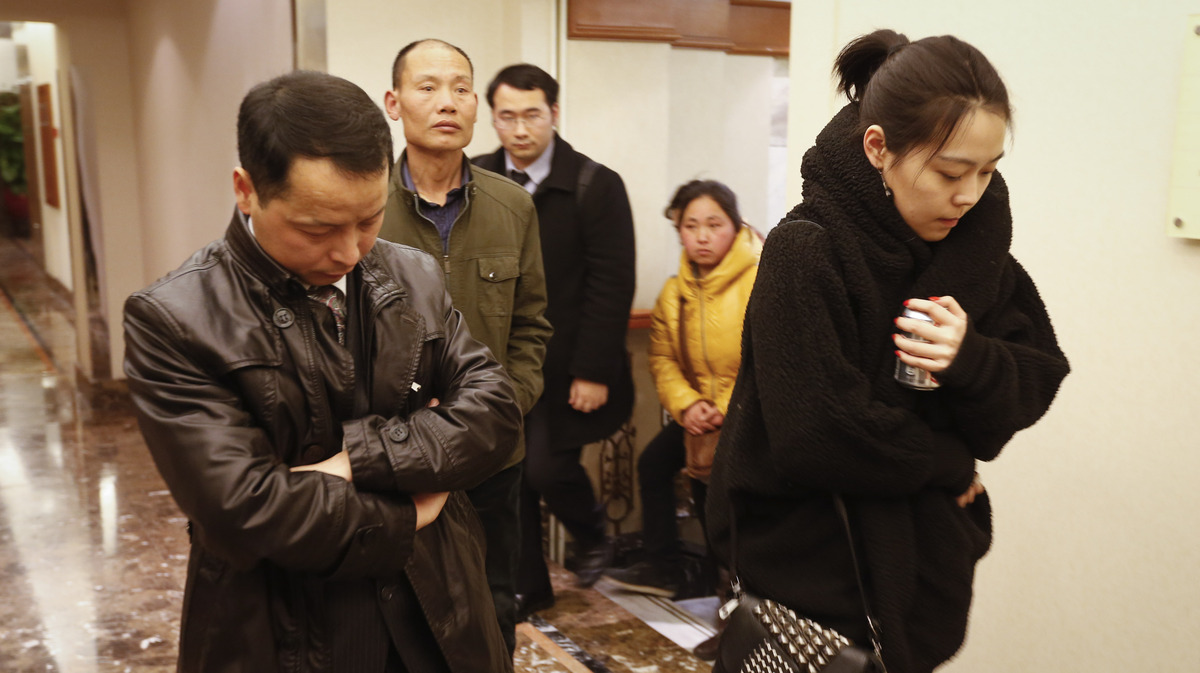 Family members arrive at a hotel for loved ones of passengers aboard a missing Malaysia Airlines jet in Beijing Sunday. Search teams across Southeast Asia scrambled on Saturday to find a Malaysia Airlines Boeing 777 with 239 people on board that disappeared from air traffic control screens over waters between Malaysia and Vietnam.

An international search is underway for a Malaysia Airlines passenger jet that's been missing for more than 24 hours. Malaysia Airlines flight MH370 had 227 passengers and 12 crew members aboard when it took off from Kuala Lumpur early Saturday on a flight bound for Beijing.

The flight departed from Kuala Lumpur and was last reported over open waters between Malaysia and Vietnam. CIA World Factbook hide caption

The flight departed from Kuala Lumpur and was last reported over open waters between Malaysia and Vietnam.

"Malaysia Airlines humbly asks all Malaysians and people around the world to pray for flight MH370," the company said in a statement released early Sunday, local time. The airline added that while the search operation on the water continues overnight, search aircraft won't resume their patrols until daylight arrives Sunday.

After "the whereabouts of the aircraft is determined, Malaysia Airlines will fly members of the family to the location," the company said.

The notice comes hours after military planes from Vietnam reported seeing two oil slicks off the country's coast that could be a sign of the missing jetliner, as we reported earlier. Photographed from the sky, the two slicks were estimated as being 6-9 miles long and nearly 550 yards apart, according to a statement released by Vietnam's Civil Aviation Administration.

But Malaysian Prime Minister Najib Razak warned against leaping to conclusions based on that report, noting that no wreckage has been found.

Officials say the broad search continues, even as ships are being sent to investigate the oil slick sighting. The search effort has focused on waters between Malaysia and Vietnam where contact was last made with the jet. Teams from Malaysia, Singapore and Vietnam have been searching that area.

The U.S. State Department has confirmed that at least three U.S. citizens were on the flight. The plane's passengers were reportedly citizens of 14 different countries, including 154 people from China.

But after the airline released the flight's passenger manifest Saturday, reports emerged from Italy and Austria that two names on the list belong to people whose passports were stolen in recent years.

As can happen when news is breaking, some information that's being reported may later turn out to have been incorrect. We'll focus on reports from officials involved in the search and news outlets that have reporters in important locations.

The search continued Sunday morning for the missing Malaysian jetliner, but so far no wreckage has been found in the vicinity of where two large oil slicks were spotted Saturday in the open waters between Malaysia and Vietnam.

In a statement released Saturday, Austin, Texas-based Freescale Semiconductor confirmed that 20 of its employees — 12 from Malaysia and eight from China — were passengers on-board the missing Malaysian Airlines flight.

"At present, we are solely focused on our employees and their families," said Gregg Lowe, president and CEO of Freescale, in the statement. "Our thoughts and prayers are with those affected by this tragic event."

The company said they are continuing to monitor the situation.

The FBI also said on Saturday that they would deploy agents and technical experts to assist in investigating the missing plane, reports the Los Angeles Times.

An official told the Times that because of the U.S. citizenship of three of the passengers, it gives them entry into the case. The official spoke confidentially because the FBI investigation is just beginning.

The fate of flight MH370 is prodding many questions about what happened — particularly because the Boeing 777 is known as a sturdy aircraft.

"Assuming that the plane has indeed gone down, this would be only the third accident in the entire lengthy career of the Boeing 777, which entered service in 1995," reports the International Business Times. In 2008, a British Airways 777 crash-landed at London Heathrow airport after icing in the engines caused a sudden loss of power while on approach; no one was seriously hurt."

"If there was a minor mechanical failure — or even something more serious like the shutdown of both of the plane's engines — the pilots likely would have had time to radio for help. The lack of a call "suggests something very sudden and very violent happened," said William Waldock, who teaches accident investigation at Embry-Riddle Aeronautical University in Prescott, Ariz."

The news agency adds that once the aircraft is located, details should help investigators home in on what happened — beginning with what kind of wreckage searchers find.

"If it is large and spread out over tens of miles, then the plane likely broke apart at a high elevation," the AP's Scott Mayerowitz writes. "That could signal a bomb or a massive airframe failure. If it is a smaller field, the plane probably fell from 35,000 feet intact, breaking up upon contact with the water."

U.S. intelligence officials say they see no "nexus" to terrorism so far, but are monitoring the situation and ready to help the international investigation, according to information passed along to NPR's Carrie Johnson.

As we reported earlier:

"Italian newspaper La Repubblica reports that Luigi Maraldi, 37, whose name is on the manifest, is alive and well in Thailand. That's where his passport was stolen last August, the newspaper says, citing the foreign ministry and the man's parents.

"According to La Repubblica, officials visited Maraldi's parents' house to inform them of their son's apparent death. But the parents said they'd just spoken to him on the phone – that he had called from Thailand to assure them that he was OK.

"Austria's foreign ministry tells CNN that one of its citizens whose name is listed on the manifest reported his passport stolen two years ago."

NPR's Sylvia Poggioli reports that an Austrian foreign ministry spokesman says Christian Kozel, 30, is safe at home, despite his name appearing on the flight manifest.

"His passport was also stolen two years ago while he was travelling in Thailand," Sylvia says. "Officials would not speculate on the coincidence of two people travelling with stolen passports on a flight that went missing off the Vietnamese coast."

The plane had been scheduled to land in Beijing around 6:30 a.m. Saturday, local time – or 5:30 p.m. ET Friday, reflecting the 13-hour time difference between Malaysia and the East Coast of the U.S.

Malaysia Airlines has said contact was lost about two hours into the flight, which began shortly after midnight. Other data, from the online tracking site Flight Radar 24, indicates the plane may have gone missing somewhat earlier.