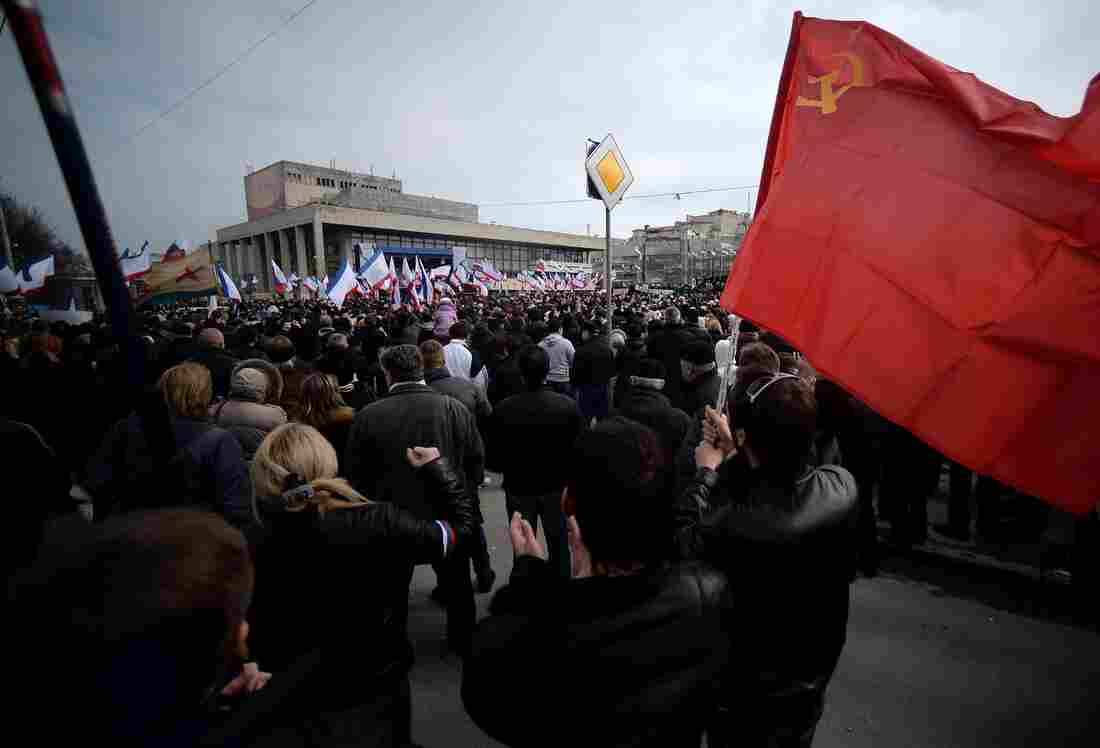 A man holds a Soviet Union flag during a pro-Russia rally in Simferopol, Crimea's Lenin Square Sunday. In Kiev, Ukrainian Prime Minister Arseniy Yatsenyuk vows not to give "an inch" of territory to Russia. Filippo Monteforte/AFP/Getty Images hide caption 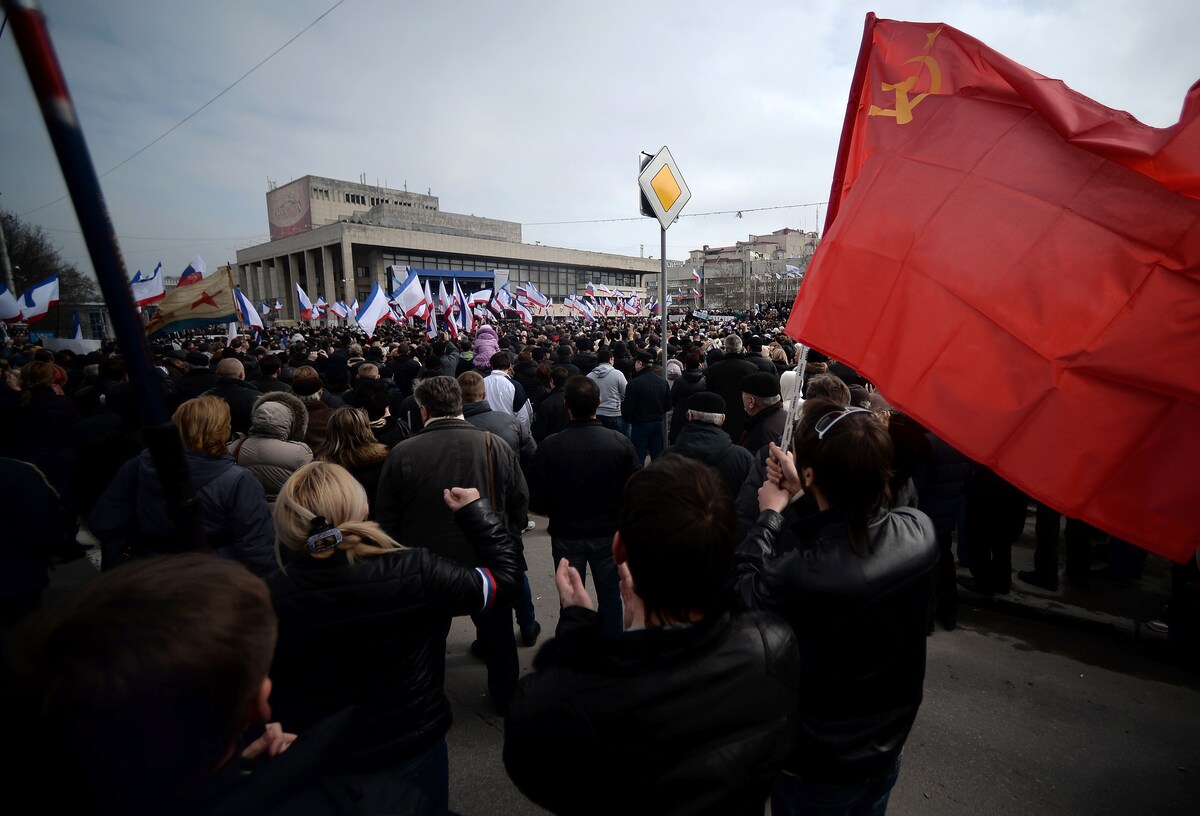 A man holds a Soviet Union flag during a pro-Russia rally in Simferopol, Crimea's Lenin Square Sunday. In Kiev, Ukrainian Prime Minister Arseniy Yatsenyuk vows not to give "an inch" of territory to Russia.

Pro-Russian groups used whips to attack pro-Ukrainian demonstrators in Sevastopol, the port city of Ukraine's Crimean Peninsula, according to the BBC. The news agency says its reporter at the scene is "describing the scenes as very ugly."

The violence comes as Ukraine's interim Prime Minister Arseniy Yatsenyuk plans a visit to the United States, a trip that he announced during a cabinet meeting Sunday, reports NPR's Emily Harris. No details about that visit were made public, but it is believed to be scheduled for this week.

The pair "will discuss how to find a peaceful resolution to Russia's ongoing military intervention in Crimea that would respect Ukrainian sovereignty and territorial integrity," Carney says, in addition to discussing elections planned fro Ukraine in May.

"The authorities in Ukraine's breakaway region of Crimea on Sunday ruled out negotiations with the central government, which they say is illegitimate," says Ria Novosti.

Referring to a referendum that will offer voters a choice of seceding from Ukraine, the news agency says the process of joining Russia could take only "about a month," citing Crimean Parliament speaker Vladimir Konstantinov. The vote on whether to join the Russian Federation is scheduled to take place next Sunday.

Women in Ukraine are heeding the same call for action that has driven men to join the country's army. And while some are looking to work as nurses and in other support roles, others are raring for a fight, reports Radio Free Europe. The agency notes that women have played roles in the protests and civil unrest that led up to the current crisis.

"I've practiced sambo and judo professionally for 10 years," Tetiana Turchina tells RFE. "I know how to shoot and jump with a parachute. I'm familiar with extreme situations because I love extreme sports, rafting, and hiking. Sleeping in a tent surrounded by snow in minus-20-degrees-Celsius doesn't scare me."

Reuters says that pro-Russian forces have tightened their hold on Crimea:

"In the latest armed action, Russians took over a Ukrainian border post on the western edge of Crimea at around 6 a.m. (0400) GMT, trapping about 30 personnel inside, a border guard spokesman said.

U.S. and European diplomats have been working on how to convince Russia's President Vladimir Putin to pull the Russian military from in and around Crimea. But the idea of using sanctions as a possible tool drew a threat from Russia, with the Ministry of Defense saying it might halt international nuclear weapons inspections if sanctions are approved, according to The Washington Post.