Accessibility links
Family Trust Wins Supreme Court Fight Against Bike Trail : The Two-Way "They want to bring a train through here, that's fine," a Wyoming landowner says. "We never expected and we never agreed to a bicycle trail." His family is fighting a rails-to-trails conversion. 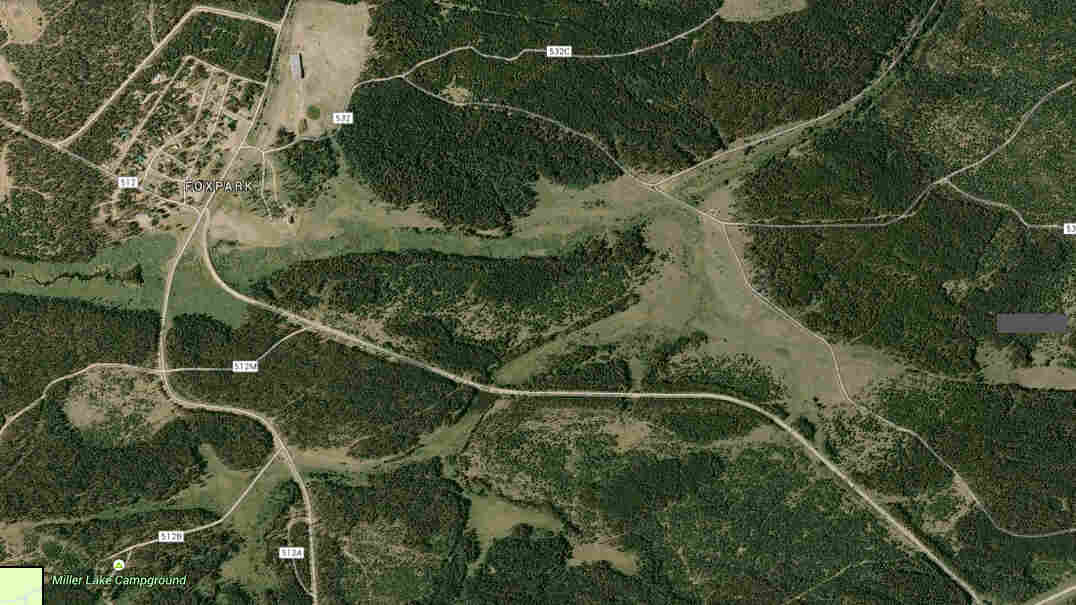 A Wyoming man has won a Supreme Court case fighting efforts to route the Medicine Bow Rail Trail through his family's property. On this map, the trail is the unmarked route moving from the lower right toward Fox Park, where Marvin Brandt lives. Google Maps hide caption 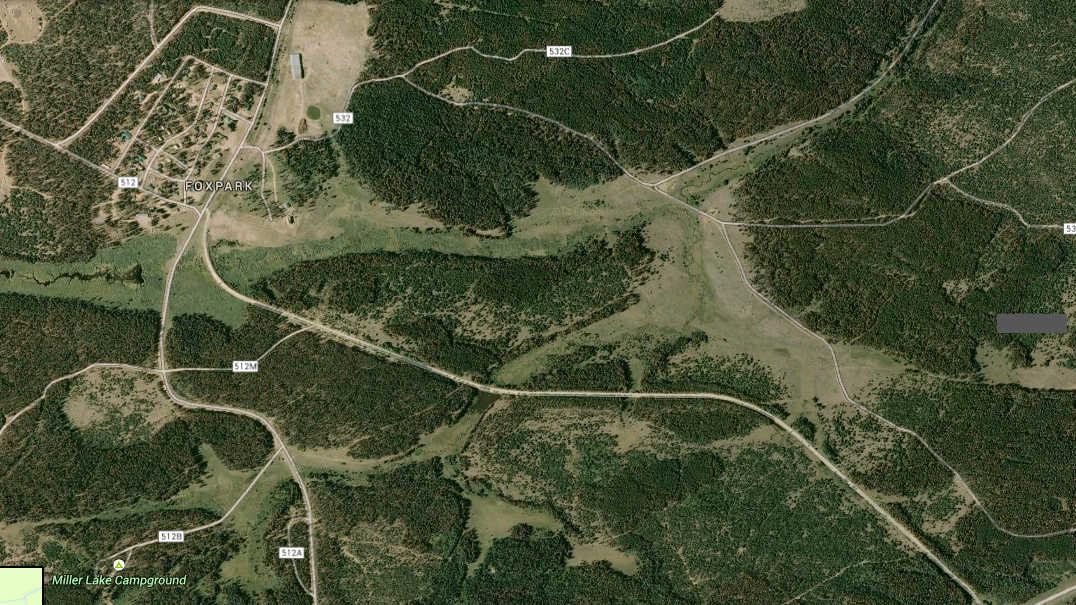 A Wyoming man has won a Supreme Court case fighting efforts to route the Medicine Bow Rail Trail through his family's property. On this map, the trail is the unmarked route moving from the lower right toward Fox Park, where Marvin Brandt lives.

The federal government loses its control of land that's granted to railroad companies after the track has been abandoned, the U.S. Supreme Court ruled Monday. The court sided with a private landowner in Wyoming who is fighting efforts to convert disused tracks into a bike path near his house.

The court's decision overturns decisions by district and appeals courts. The wider impact of the ruling is difficult to estimate, partly because the U.S. government doesn't have a central database of the land it owns under such circumstances, as SCOTUS Blog has reported.

The justices and attorneys acknowledged that uncertainty during oral arguments over the case in January.

"For all I know, there is some right of way that goes through people's houses, you know," Justice Stephen Breyer said, "and all of a sudden, they are going to be living in their house and suddenly a bicycle will run through it."

Today's ruling could have "implications for about 80 other cases involving some 8,000 claimants," according to USA Today. "Tens of thousands of other property owners also could emerge as victors."

The plaintiffs in the Wyoming case, Marvin Brandt Revocable Trust v. United States, are descendants of the owner of a sawmill that produced railroad ties. The family was granted dozens of acres of land in Medicine Bow-Routt National Forest; they are resisting attempts to use part of that land for a trail.

"We traded for the land with a right of way on it for railroad uses," Brandt said in December. "They want to bring a train through here, that's fine. We never expected and we never agreed to a bicycle trail."

That's a quote from a profile of the case in the journal Environment & Energy. Here's more from the article:

"The mill is long gone, and — to Brandt's eye — his view is ruined by a Forest Service bicycle trail that runs behind his property, then bisects his 83-acre tract, which is about 50 miles west of Laramie.

"Brandt, 69, has protested the trail since the Forest Service proposed converting the abandoned railway for recreational use nearly a decade ago. He claims that once the railroad abandoned the government-issued right of way in the mid-1990s, he gained ownership of that land."

The family was granted the land in 1976, in exchange for turning a larger acreage over to the government. The court's discussion of the case touched on decades of law, from the 1875 Railroad Right of Way Act to the 1942 Great Northern Railway case, which centered on oil and mineral rights.

When the Forest Service moved to convert a swath of former railroad track on the Brandts' land that is 200 feet wide and nearly a half-mile long into bike trails, the family sued. After losing in two lower courts, they emerged from the Supreme Court with a victory today.

With 21 miles of gravel pathway passing through the forest, the Medicine Bow Rail Trail "has become one of the most popular rail trails in America," according to the Rails-to-Trails Conservancy.

The organization, which filed papers with the court siding with the U.S. government, says the Brandt family's legal fight has been aided by groups such as the Mountain States Legal Foundation, the Cato Institute and the Pacific Legal Foundation.

In the Supreme Court's opinion issued Monday, the majority noted that although the family's land grant came with restrictions that included the use of roads on the property, "if those roads cease to be used by the United States or its assigns for a period of five years, the patent provides that 'the ease­ment traversed thereby shall terminate.' "

The lone dissenting vote in the case came from Justice Sonia Sotomayor, who wrote that her colleagues erred in its interpretation of or reliance on a 1942 decision that involved oil and mineral rights on federal land that is tied to railroads' right of way.

The majority's opinion "does not meaningfully grapple with prior cases ... that expressly concluded that the United States retained a reversionary interest in railroad rights of way," Sotomayor wrote.

Writing for the majority in the case, Chief Justice John Roberts wrote that the grant of land, or patent, "did not specify what would occur if the railroad abandoned this right of way."

During oral arguments earlier this year, discussion of the case also centered on the differences between an easement and a fee. Here's a relevant exchange from the court transcript:

JUSTICE KENNEDY: Is there any doctrine in property law that if a right of access is granted and it's to the exclusion of all other uses, it's — it looks for all purposes like absolute control, that it ceases to be an easement and becomes a limited fee? I mean, is there some magic that takes place in property law so that if there's a grant that conveys such total control, is it construed not to be an easement?

JUSTICE SCALIA: Have you even heard of the term "limited fee" until this case? I never heard it.

MR. LECHNER: I read these cases in law school so I was aware of the term.

The case is submitted.

In her dissent, Sotomayor wrote that the justices were shifting the court's position on rights of way that it established in 1903. The issue is broader than whether rights are termed "easements" or "fees," she said. She concluded:

"By changing course today, the Court undermines the legality of thousands of miles of former rights of way that the public now enjoys as means of transportation and recreation. And lawsuits challenging the conversion of former rails to recreational trails alone may well cost American taxpayers hundreds of millions of dollars."