Accessibility links
Officials Seem To Have No Clue About Fate Of Missing Jet : The Two-Way The search continues, and continues to expand, for Malaysia Airlines Flight 370, which disappeared Saturday while en route from Kuala Lumpur to Beijing. There were 239 people on board. 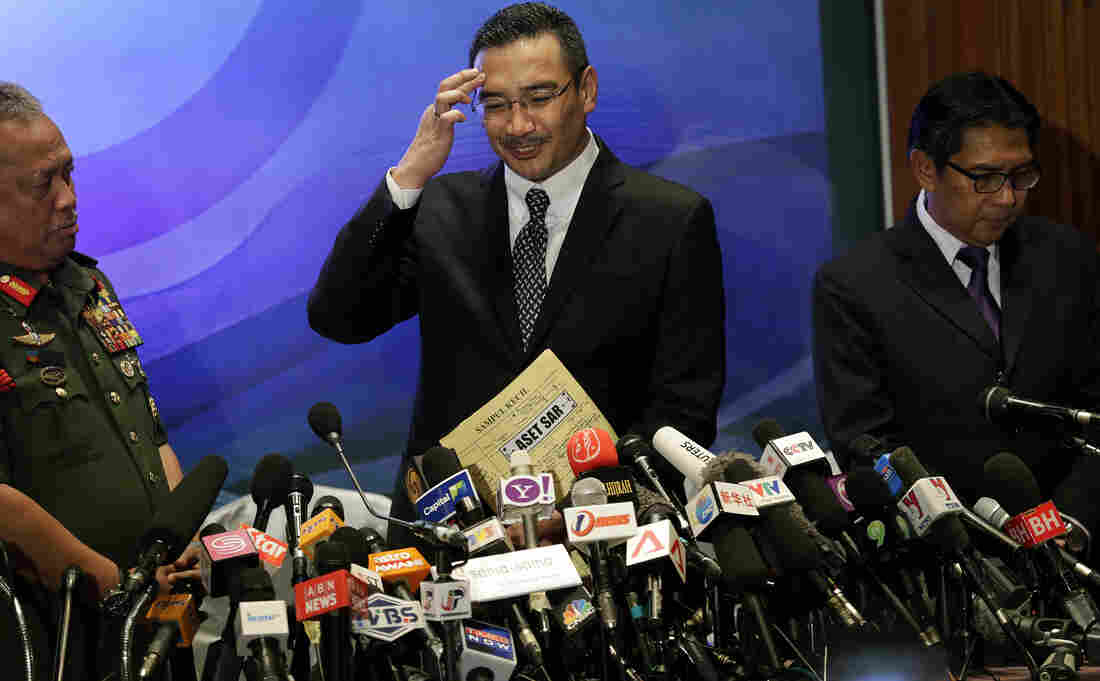 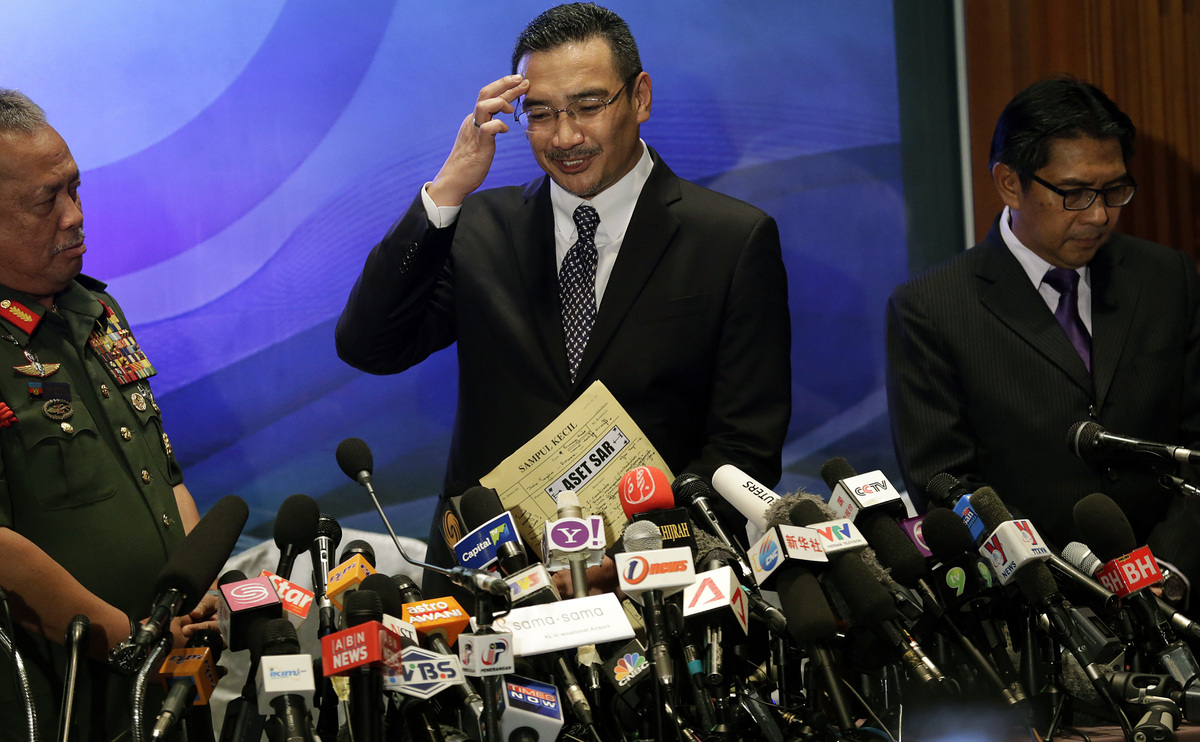 Our headline from last night could very well be repeated today:

In fact, to say things are confusing might even be an understatement.

Malaysia Airlines Flight 370 and the 239 people on board disappeared Saturday while en route from Kuala Lumpur to Beijing. That much seems to be known for sure.

It's also being reported that authorities say the last message from the plane's cockpit was "all right, roger that," when air traffic controllers in Malaysia handed the flight off to controllers in Vietnam. After that, authorities have said, there was no communication of any type.

Update at 6:20 p.m. ET: CNN and the BBC are reporting that Chinese satellite images show what could be floating wreckage in the South China Sea in the same very general area where ground controllers lost contact with Flight 370. The space photos were reportedly snapped on March 9, a day after the flight disappeared. Resolution on the images, however, is very poor, and it's impossible to say at this point whether the find is significant.

At around 9 p.m. ET, China's civil aviation chief told Reuters they had no proof the satellite images were connected to the crash.

"Chinese satellites have found smoke and floating objects ... At present we cannot confirm this is related to the missing aircraft," Li Jiaxiang said, according to Reuters.

But as Wednesday's other reports underscore, little else can be said with any certainty:

-- Was It Or Wasn't It Off Course? "A senior Malaysian air force official on Tuesday told CNN that after the plane lost all communications around 1:30 a.m. Saturday, it still showed up on radar for more than an hour longer. Before it vanished altogether, the plane apparently turned away from its intended destination and traveled hundreds of miles off course, the official said. It was last detected, according to the official, near Pulau Perak, a very small island in the Strait of Malacca, the body of water between the Malay Peninsula and the Indonesian island of Sumatra."

That account matches comments attributed by the Malaysian newspaper Berita Harian to Gen. Tan Sri Rodzali Daud, chief of Malaysia's air force. But — and here's a prime example of the confusion surrounding this story — he later denied saying that radar had tracked the plane to the Strait of Malacca, but then went on to say the Malaysian military had indeed seen radar blips that might have been Flight 370 flying over the straits.

What Would It Take To Destroy A Black Box?

'Ringing' Phones Do Not Mean Malaysian Passengers Are OK

According to Reuters, "Indonesia and Thailand, which lie on either side of the northern part of the Malacca Strait, have said their militaries detected no sign of any unusual aircraft in their airspace."

-- But The Search Continues To Widen. Although Rodzali is denying that he said military radar had tracked the plane to a point about 200 miles west of its intended route, the search for the jet "expanded on Wednesday to cover a swath of Southeast Asia, from the South China Sea to India's territorial waters, with authorities no closer to explaining what happened to the plane or the 239 people on board," Reuters writes.

So, even though Rodzali says he didn't tell the newspaper that there's radar evidence showing the jet flew over the Strait of Malacca, the search includes that area.

Meanwhile, there's this news from Bloomberg BusinessWeek: "Vietnam sent a crew today to search the Vung Tau area in the nation's southeast after a person said he [had] spotted what appeared to be a plane on fire and sent an email to government officials. Earlier this week, an aircraft had alerted Hong Kong air traffic controllers about sighting metal debris in the sea near Vung Tau, Vietnam's Civil Aviation Authority had said."

Meanwhile, India is now among at least 11 nations that have joined Malaysia in the search. It has been asked to look in the Andaman Sea, south of Burma and west of Thailand. According to the BBC, "China, Vietnam, USA, Thailand, Australia, Singapore, Indonesia, New Zealand, Japan and the Philippines are also contributing ships, aircraft and personnel, while other nations such as India and Brunei have also offered support." (Update at 11:35 a.m. ET.)

As The Guardian says:

Note: The confusing and conflicting reports about Flight 370's fate show how, as often happens in stories such as this, information is reported by officials and news outlets that later turns out to have been incorrect. We'll continue to sort through what's out there and update if things change.