Accessibility links
Why Did The Possibly Pregnant Shark Cross The Atlantic? : The Two-Way Probably not just to get to the other side. Thanks to a tracking device, researchers and anyone on the Web have watched as "Lydia" has gone where no great white shark has been tracked before.

Why Did The Possibly Pregnant Shark Cross The Atlantic?

Why Did The Possibly Pregnant Shark Cross The Atlantic? 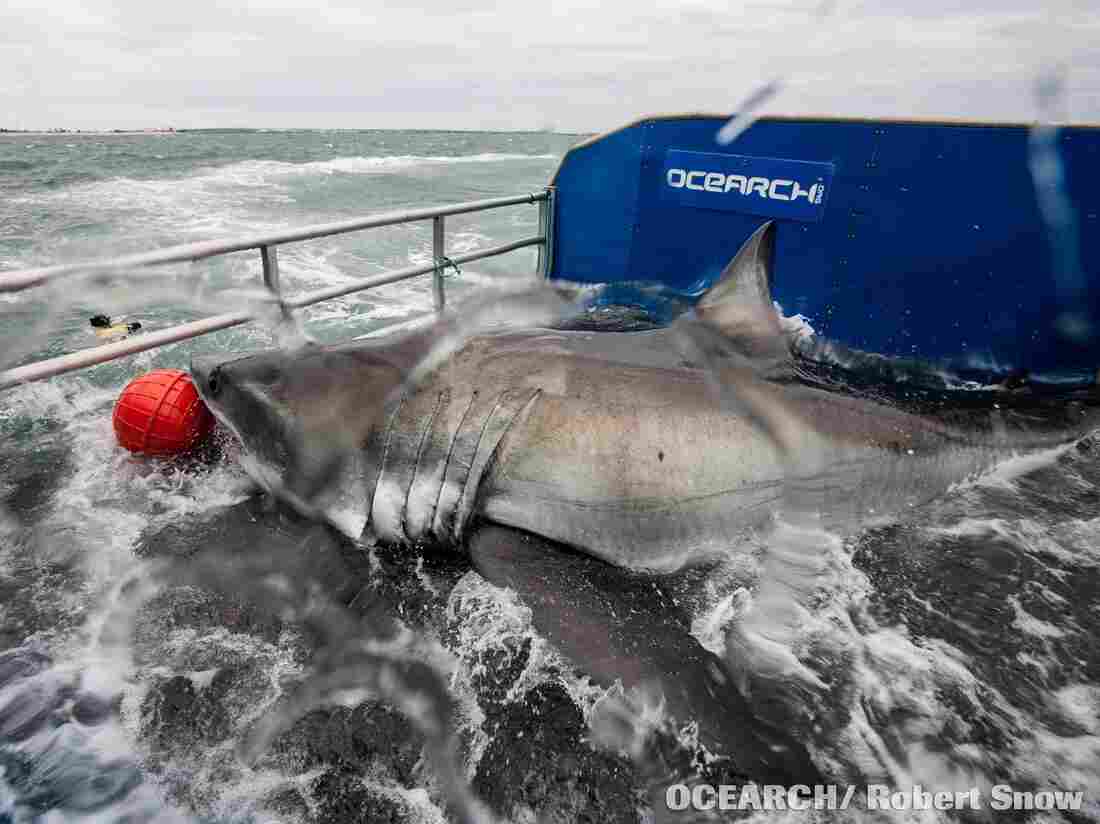 "Lydia" shortly before a tracking device was attached to her last year near Jacksonville, Fla. OCEARCH.org hide caption

You kind of have to admire headlines such as this:

That's the Mirror doing its best to scare folks into reading its report. 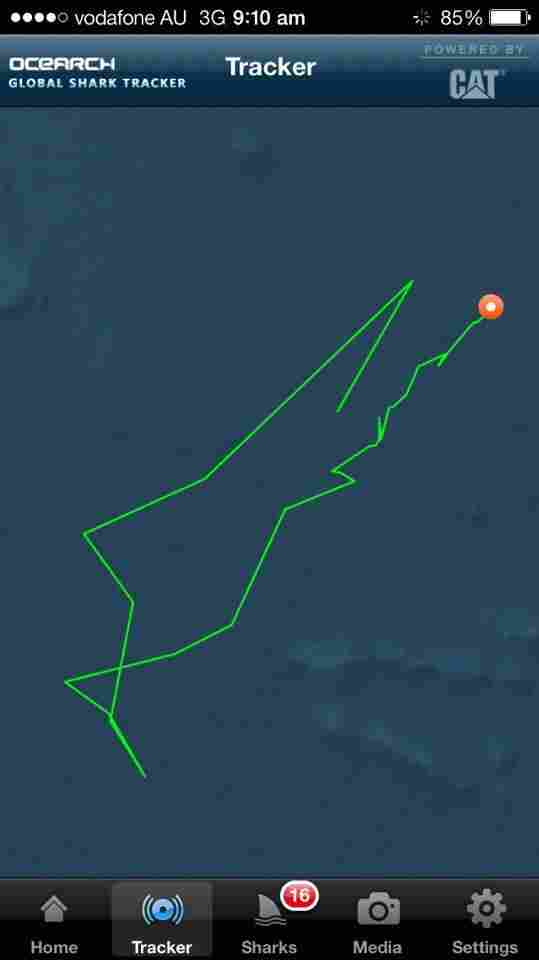 Is "Lydia" messing with us? It's been noticed that part of her route looks something like a shark. Facebook hide caption 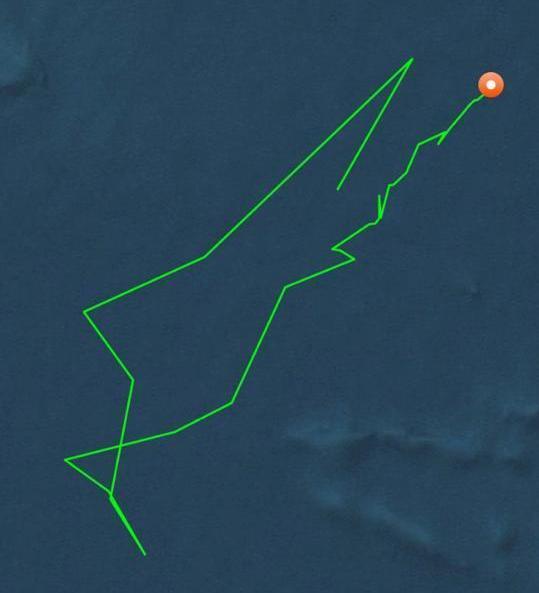 Is "Lydia" messing with us? It's been noticed that part of her route looks something like a shark.

The story behind the scary headline, though, is interesting.

OCEARCH, a nonprofit organization that studies "great white sharks and other large apex predators," last year affixed a tracking device to a great white it dubbed Lydia. She was found and tagged near Jacksonville, Fla.

In the year or so since she's been tracked, Lydia has traveled about 19,000 miles, the BBC writes. But it's where she's been in recent days that has really gotten the researchers' attention: She's on the eastern side of the Mid-Atlantic Ridge. That makes Lydia the first great white that scientists have been able to track from one side of the Atlantic to the other and into colder waters of the North Atlantic, where it was thought great whites might not wish to swim.

Anyone can follow her travels on OCEARCH's website. In the past 24 hours, she appears to have turned even a little farther east. She's about 1,000 miles from the coast of Ireland.

The part of the story about Lydia possibly being pregnant comes from OCEARCH's founder, Chris Fischer. He tells the BBC he thinks she's been "out in the open ocean gestating her babies, and that this spring she will lead us to where those baby white sharks are born — the nursery."

Fischer goes on to say he doubts that shore-goers in the British Isles have to worry about Lydia delivering two to 12 pups in their swimming waters sometime this spring. "If you forced me to guess" where she'll give birth, Fischer says, "I'd say it was over in the Mediterranean, near Turkey. ... But that's longball I'm playing. She could turn around right now and head back to Florida."

Meanwhile, is Lydia having some fun with her trackers? We noticed, as did one of her fans, that on one part of her journey it looks as though she was drawing a picture of herself. 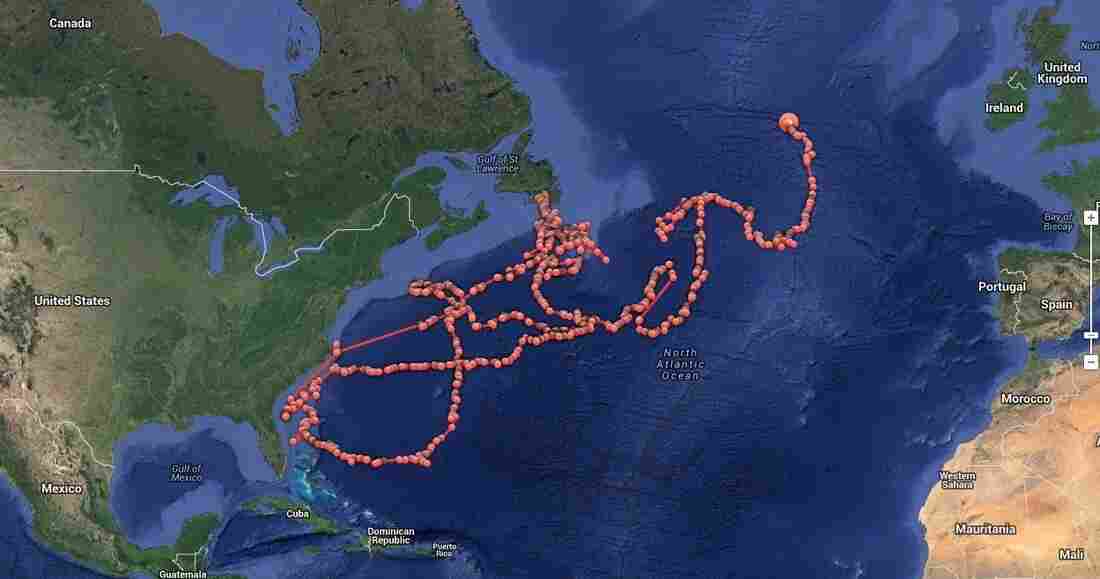 "Lydia," a great white shark, has traveled about 19,000 miles in the past year or so. The dots track her route. OCEARCH.org hide caption