Accessibility links
When Bad Things Happen To Planes, Flight Codes Get 'Retired' : The Two-Way Malaysia Airlines says it will stop using codes associated with its missing Flight MH370 as a "mark of respect" for the plane's passengers and crew. It's a long-standing industry practice.

When Bad Things Happen To Planes, Flight Codes Get 'Retired'

When Bad Things Happen To Planes, Flight Codes Get 'Retired' 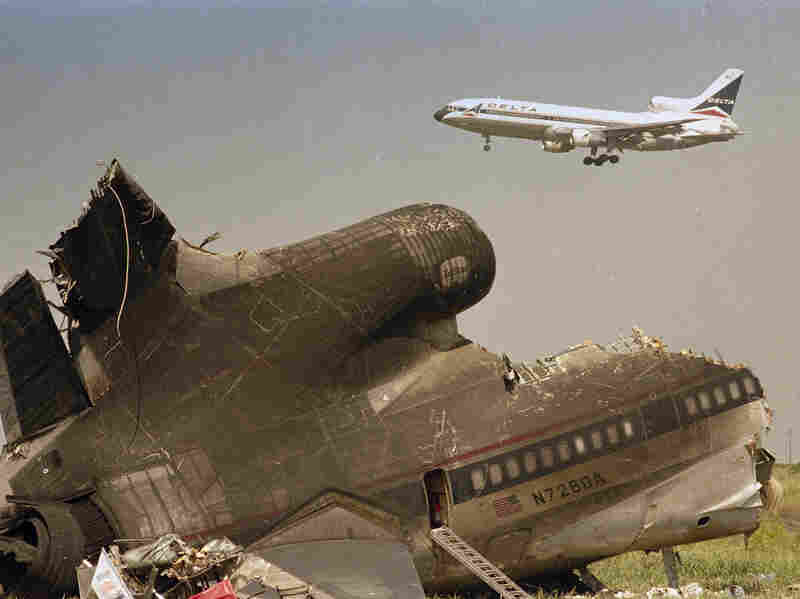 The charred tail section of Delta Flight 191 sits near a runway at Dallas-Fort Worth International Airport in August 1985 after it crashed on approach. Delta quickly retired the "191" designation. Carlos Osorio/AP hide caption

Malaysia Airlines announced Thursday that it will stop using two flight numbers associated with the plane that disappeared over the Gulf of Thailand on March 8, following a long-standing practice of retiring codes after similar incidents.

Flight MH370 vanished en route from Kuala Lumpur to Beijing with 239 people aboard. That number, which Malaysian Airlines uses to denote that particular route, will no longer be used after Friday as a "mark of respect" for the passengers and crew. MH371, the code used for the return flight, also will be retired.

Those two flights will now be known by the designations MH318 (Kuala Lumpur to Beijing) and MH319 (Beijing to Kuala Lumpur).

As The Wall Street Journal reports, "Airlines often retire flight numbers following fatal crashes so as not to evoke negative emotions among other passengers and crew. This is particularly true with high-profile accidents, say aviation analysts."

Korean Airlines, for example, no longer has a Flight 007 in deference to the airliner that was shot down by Russian fighter jets in 1983 after straying into Soviet airspace. Likewise, Delta Air Lines retired Flight 191 after a Lockheed TriStar with that designation was caught in a microburst on approach at Dallas-Fort Worth and slammed into the ground, killing more than 130 people.

More recently, Asiana Airlines announced it would change the call sign after Flight 214 crashed on approach to San Francisco last year, killing three passengers. Asiana spokesman Suh Ki-Won was quoted by the Los Angeles Times as saying the routes from Seoul to San Francisco and back (214 and 213) would be renumbered to 212 and 211.

"The reason for the change is that many people remember the flight number," Suh told the Times, adding that the airline didn't want its customers to have "that kind of image."

Salon.com notes that "the decision-making process behind flight number retirement, however, is completely opaque. ... A review of historic accidents, however, suggests that the decisions are made on a case-by-case basis, seemingly guided in part by how familiar the public is with the flight number."

In 2011, United Airlines blamed a computer glitch for inadvertently reactivating flight codes 93 and 175, both retired after those flights were seized by terrorists on Sept. 11, 2001. Flight 93 was commandeered en route to San Francisco and crashed near Shanksville, Pa., killing all 44 people on board after passengers tried unsuccessfully to gain control of the plane. And Flight 175 from Boston to Los Angeles crashed into the south tower of the World Trade Center, killing all 65 passengers and crew.

The Times says of the computer foul-up three years ago: "The flight numbers were assigned by a computer ... for sales of future flights, said airline spokesman Rahsaan Johnson. Early Wednesday, airline officials noticed the error and immediately removed them from the system."