Accessibility links
No Breakthrough In Talks About Ukraine : The Two-Way Crimeans vote Sunday on whether to split from Ukraine. The U.S. and its allies vow to penalize Russia if it continues to intervene. Secretary of State Kerry met with his Russian counterpart Friday. 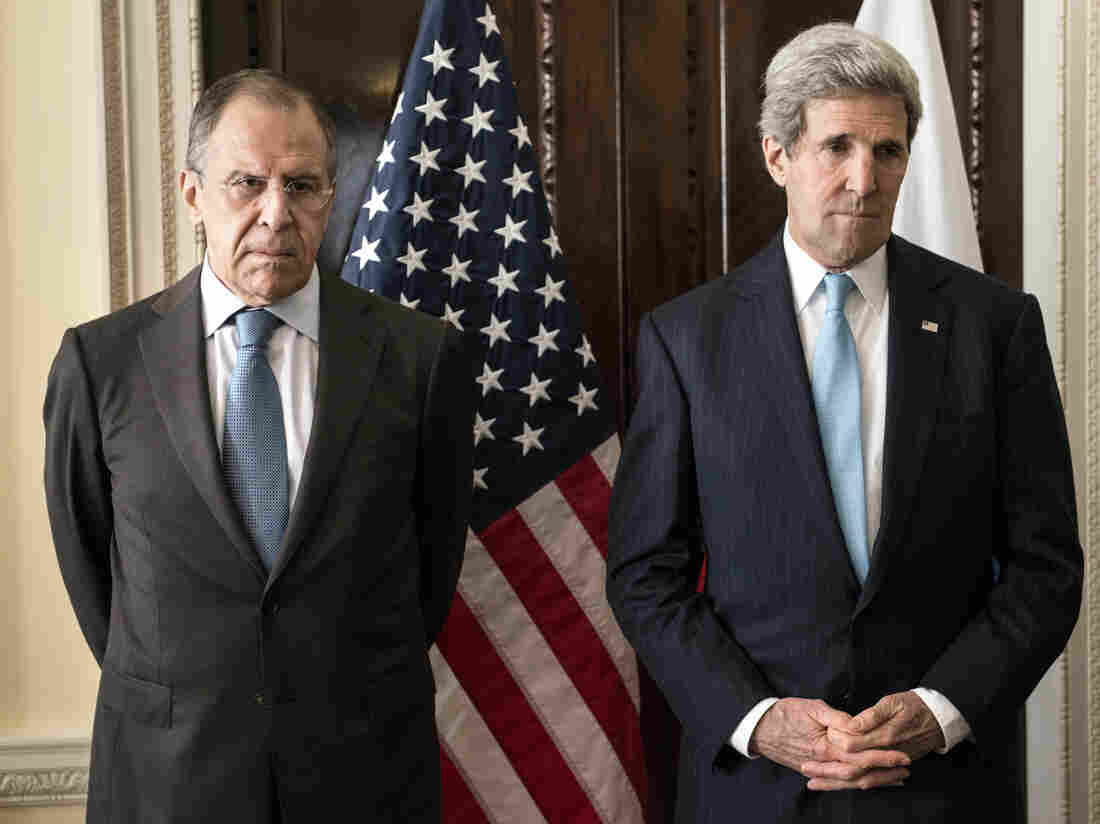 Russian Foreign Minister Sergei Lavrov, left, and U.S. Secretary of State John Kerry before their talks Friday in London. Afterward, they reported no breakthroughs on finding a solution to the crisis in Ukraine. Brendan Smialowski/AP hide caption 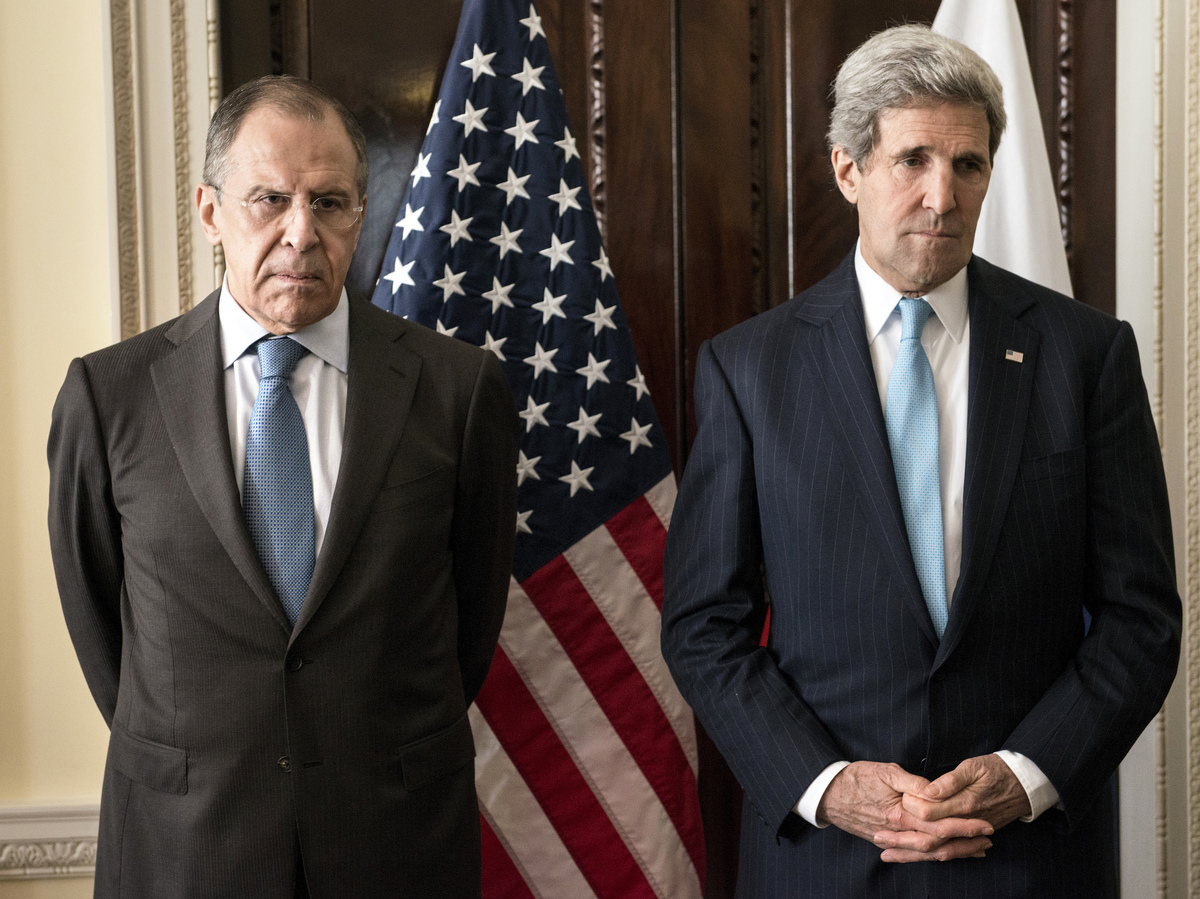 Russian Foreign Minister Sergei Lavrov, left, and U.S. Secretary of State John Kerry before their talks Friday in London. Afterward, they reported no breakthroughs on finding a solution to the crisis in Ukraine.

Update at 12:45 ET: Russian Foreign Minister Sergei Lavrov and U.S. Secretary of State John Kerry came away from talks Friday in London saying they had not come any closer to an agreement about how to end the crisis in Ukraine.

Lavrov told reporters after the two men met that Russia intends to "respect the choice of the Crimean people" — who will vote Sunday on whether to join the Russian Federation. That was a sign that Russia may indeed move to annex the region if Crimeans indicate that's their wish.

Kerry emerged from their six hours of discussions to say the U.S. and its European allies remain convinced that any move by the Crimean region to split from Ukraine would violate that nation's constitution and international law. He repeated that "there will be costs" for Russia if it continues to — in the view of the U.S. — interfere in Ukrainian affairs.

The American diplomat has previously said that the U.S. and its allies will take "serious steps" on Monday if Crimeans vote to leave Ukraine and Russia accepts that decision. Those steps would include economic sanctions.

Lavrov's view: Crimeans' "right of self-determination" should be respected.

Asked whether Russia, which has sent some forces into Crimea, might take military action elsewhere in eastern Ukraine, Lavrov said "the Russian Federation doesn't have any plans to intervene in eastern Ukraine and couldn't have such plans."

Asked whether he views those words as an assurance that Russia would not send troops elsewhere in Ukraine, Kerry said "all of us would like to see actions, not words, that support the notion that people are moving in the opposite direction and are in fact diminishing their presence" militarily.

Kerry also said he does not know whether or not Russia will move to annex Crimea after Sunday's vote. To do so, he said, "would be against international law."

Kerry stressed that he believes a solution to the crisis can be reached that both restores and respects the territorial integrity of Ukraine and addresses "Russia's legitimate concerns."

Our original post and an earlier update pick up the story: 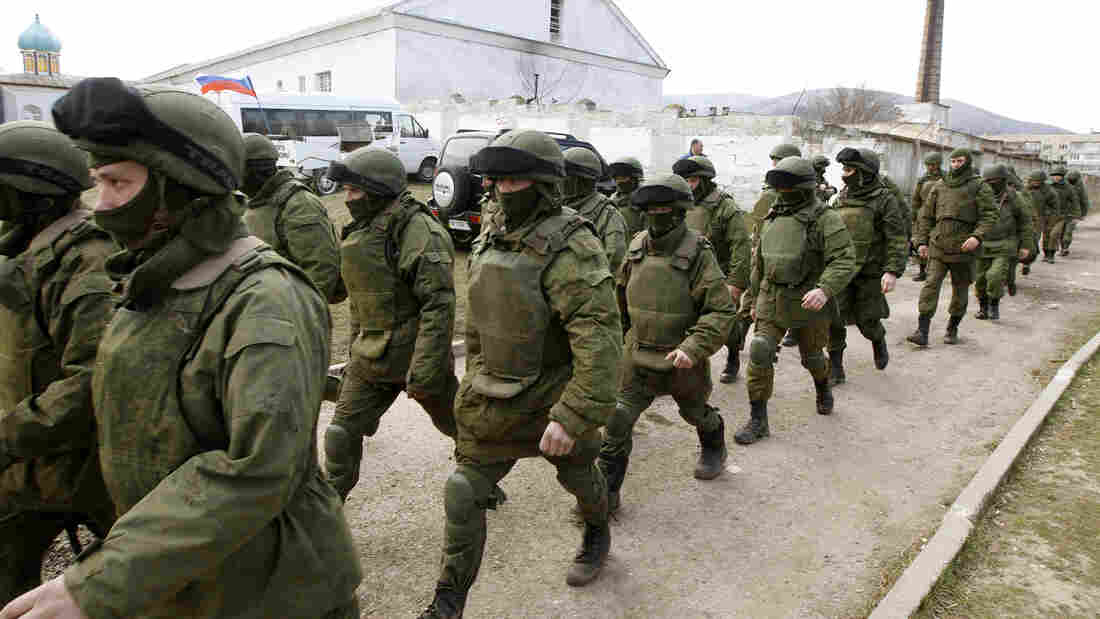 Armed men, believed to be Russian troops, walk outside a Ukrainian military base in Perevalnoye, near the Crimean city of Simferopol, on Friday. Vasily Fedosenko /Reuters/Landov hide caption 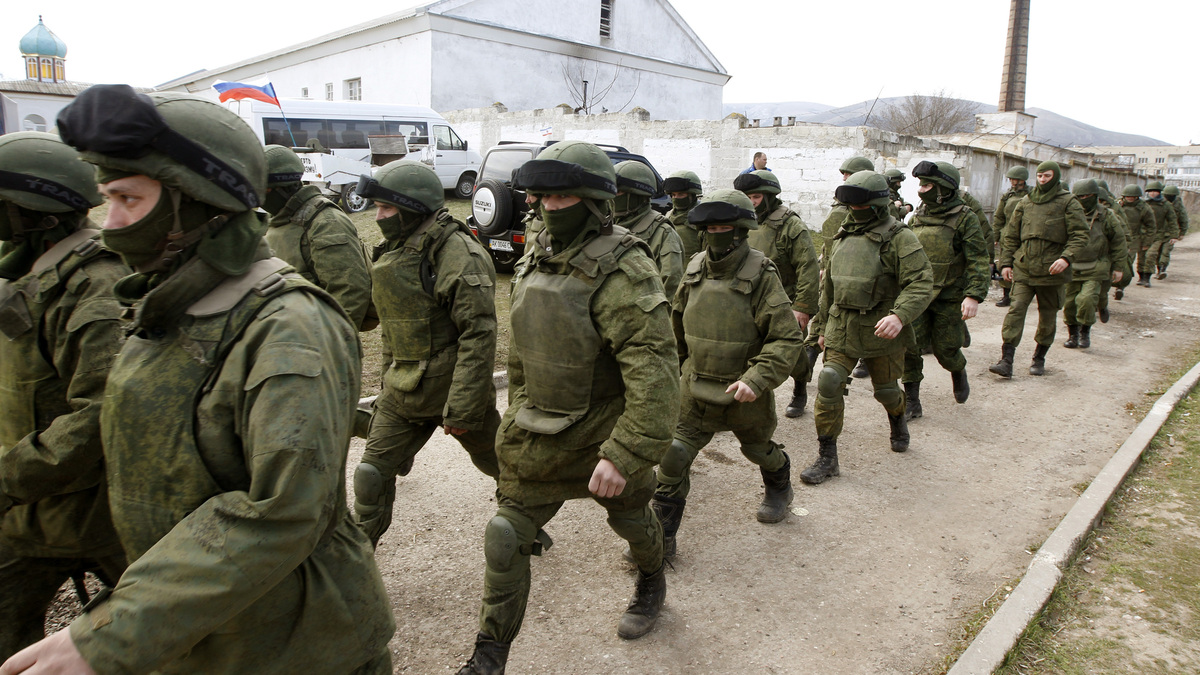 Armed men, believed to be Russian troops, walk outside a Ukrainian military base in Perevalnoye, near the Crimean city of Simferopol, on Friday.

While Crimeans prepare to vote Sunday on whether to join the Russian Federation, Secretary of State John Kerry is in London for talks with Russian Foreign Minister Sergei Lavrov.

As NPR's Ari Shapiro tells our Newscast Desk, Kerry is looking for a way to de-escalate the crisis in Ukraine.

The BBC adds that Kerry is expected to warn Lavrov "that the disputed referendum being held in Crimea in two days and Russia's military intervention there could trigger concerted U.S. and EU sanctions."

Indeed, as NPR's Michele Kelemen reported Thursday, Kerry says that if Russia doesn't help resolve the crisis, "there will be a very serious series of steps Monday in Europe" and the U.S.

Those steps could include economic sanctions and additional travel restrictions on any officials believed to have been responsible for Russian intervention in Ukraine.

Before they went behind closed doors at the U.S. ambassador's residence in London, Kerry and Lavrov spoke to reporters. The State Department posted a short transcript.

Kerry: "Good morning, everybody. [It's] my pleasure to welcome Foreign Minister Lavrov to Winfield House, the American Embassy residence here in London. Obviously, we have a lot to talk about. I look forward to the opportunity to dig into the issues and possibilities that we may be able to find about how to move forward together to resolve some of the differences between us. And we look forward, I know, to a good conversation."

Lavrov: (via interpreter) "Well, I'm also satisfied to have this meeting today. This is a difficult situation we are in. Many events have happened and a lot of time has been lost, so now we have to think what can be done. Thank you."

On Morning Edition, NPR's Gregory Warner reported from Crimea about the scene there in advance of Sunday's vote. He reports having seen dozens of armored personnel carriers, fuel supply trucks and military satellite systems near the region's border with the rest of Ukraine.

Gregory notes that Crimeans will be asked to vote on two questions Sunday: whether to join the Russian Federation; or whether to stay part of Ukraine but revert to an earlier constitution that gave them even more autonomy and the chance for dual Ukrainian-Russian citizenship.

Also on Morning Edition, NPR's Peter Kenyon reported about the concerns that Crimea's Tatars have over the pro-Russian sentiment in the region.

Need a refresher on what this crisis is all about?

As we've previously said, Crimea has been the focus of attention as the ripple effects of the protests that led to last month's ouster of Ukrainian President Viktor Yanukovych have spread.