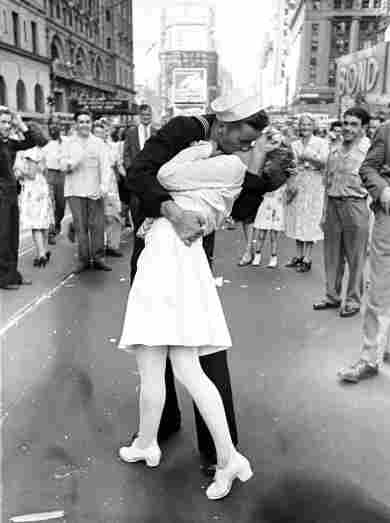 The man widely believed to be at the center of an iconic 1945 photo showing a sailor kissing a nurse in the middle of Times Square on V-J Day has died.

The Associated Press reports that Glenn McDuffie died of natural causes on Sunday in a nursing home in Dallas.

His identification as the "kissing sailor" was controversial. But McDuffie always claimed he was the sailor and as The Dallas Morning News reports a renowned forensic artist bolstered his case in 2005. The paper reports:

"By taking about 100 pictures of McDuffie using a pillow to pose as he did in the picture taken Aug. 14, 1945, by photographer Alfred Eisenstaedt, [Houston Police Department forensic artist Lois Gibson] said, she was able to match the muscles, ears and other features of the then-80-year-old McDuffie to the young sailor in the original image.

"'I was absolutely positive,' Gibson said of the match. 'It was perfect.'

"The identification remained controversial, partly because other men also claimed to have been the sailor in the image, but also because Life magazine, whose photographer had died years earlier, was unable to confirm that McDuffie was in fact the sailor, noting that Eisenstaedt had never gotten names for those in the picture."

The image became iconic because it captured what Americans felt like when a half-decade of conflict ended. As Life explains it, the nation let loose:

"While the joy and relief that surged through the entire country — and across much of the globe, or certainly across those parts of it allied with America — was heartfelt, the celebrations in many major cities were hardly all sweetness and light. In fact, as several of the images and captions here make clear, some of the tumult unleashed by word of Japan's surrender quickly (and perhaps inevitably) devolved into what can only be described as riots.

"Booze flowed, inhibitions were cast off, there were probably as many fists thrown as kisses planted; in other words, once the inconceivable had actually been confirmed and it was clear that the century's deadliest, most devastating war was finally over, Americans who for years had become accustomed to almost ceaseless news of death and loss were not quite ready for a somber, restrained reaction to the surrender. That would come, of course. There would be, in the coming months and years, a more considered, reflective response to the war and to the enemies America had fought so brutally, and at such cost, for so long.

"But in the giddy and even chaotic first few hours after the announcement, people naturally took to the streets of cities and towns all over the country. And while some of the merriment was no doubt of a quieter, G-rated variety, it's hardly surprising that countless grown men and women seized the opportunity for cathartic revelry, giving vent to joy and relief as well as to the pent-up anxieties, fears, sorrows and anger of the previous several years."

According to Time, McDuffie went on to play semi-pro baseball and got a job at the postal service.

Reuters notes that in a 2007 interview with The Houston Chronicle, he said he never spoke to the nurse before he kissed her.

"When I got off from the subway, a lady told me the war was over, and I went into the street yelling. I saw the nurse and she was smiling at me, so I just grabbed her," he said.