Accessibility links
Westboro Baptist Will Find Justification To Continue, Pastor's Son Says : The Two-Way The church's controversial founder, Rev. Fred Phelps Sr., is "on the edge of death," his son says. The pastor's death, he adds, would bring a crisis to his followers, who see death as God's judgment. 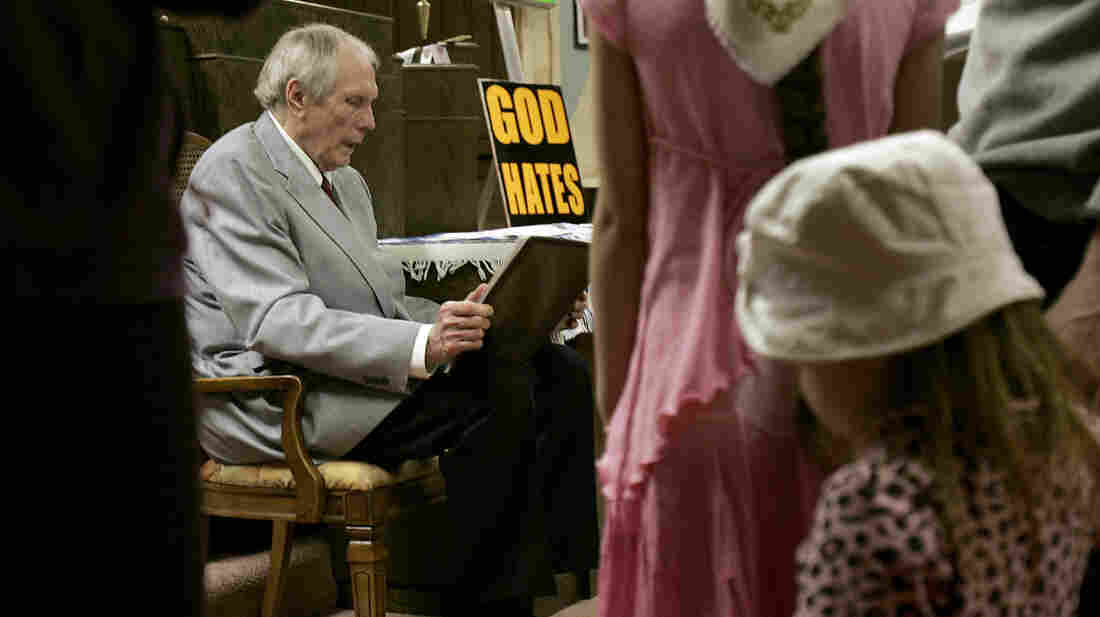 Westboro Baptist Church founder Fred Phelps' followers believe "they're not going to feel the sting of death," one of his sons says. Phelps, who's now in hospice care, is seen here at the Topeka, Kan., church in 2006. Charlie Riedel/AP hide caption 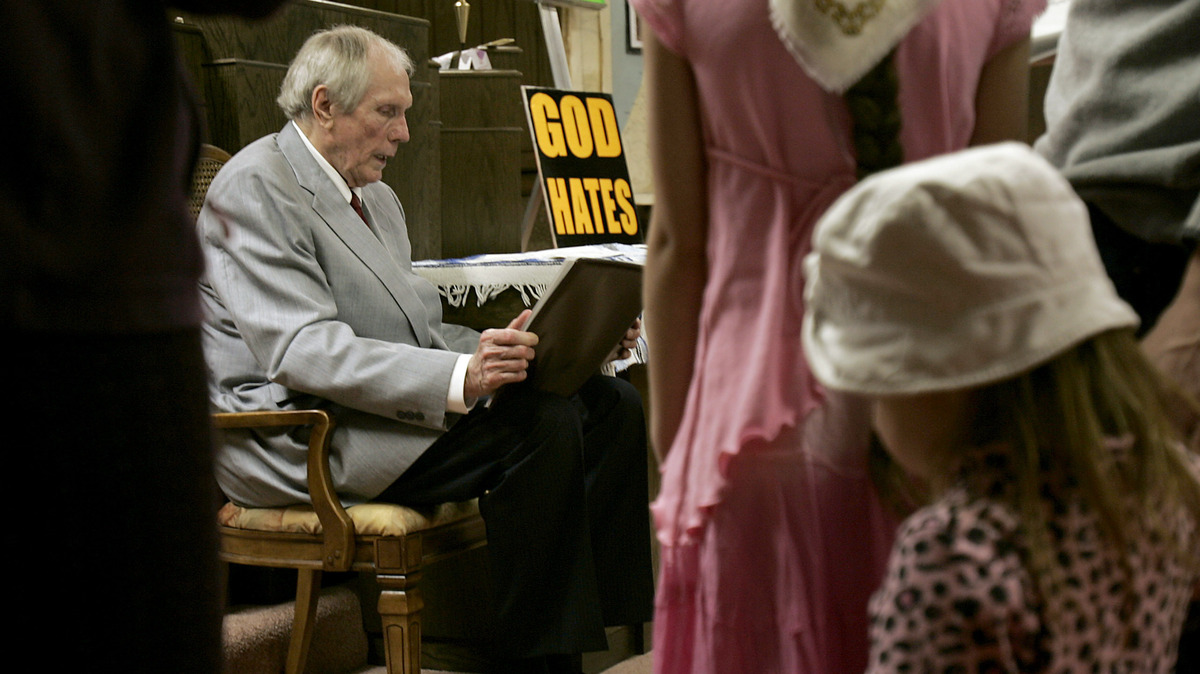 Westboro Baptist Church founder Fred Phelps' followers believe "they're not going to feel the sting of death," one of his sons says. Phelps, who's now in hospice care, is seen here at the Topeka, Kan., church in 2006.

Westboro Baptist Church founder Rev. Fred Phelps Sr. is in hospice care and near death, according to family and church members say. His estranged son says the longtime pastor's passing would put his followers in a crisis, because the church's members "think that death is a judgment from God."

"So far, that illusion has held because none of them has passed," Nathan Phelps continues in an interview with The Topeka Capital-Journal.

The church's members are convinced they will be taken up by Jesus Christ, he tells the newspaper. "They're clear about that, that they're not going to feel the sting of death," he says.

Phelps says if that belief isn't borne out, the church's members will likely see it as a test of their faith. He predicted that some would find a "palatable justification" to continue on with Westboro Baptist.

News that the founder of the church known for using controversial funeral protests to carry out a campaign against gays and other groups was in hospice care came out over the weekend, along with a statement from Phelps that his 84-year-old father had been excommunicated last summer from the church he built.

Fred Phelps Sr. "is now on the edge of death at Midland Hospice house in Topeka, Kansas," Nathan Phelps wrote in a Facebook post. He also said church members were preventing him and others who have broken with the family over the church's teachings from seeing the ailing pastor.

The reason for Fred Phelps' excommunication isn't known. A church spokesman interviewed by the Capital-Journal didn't deny the action, but he refused to elaborate. Another of Phelps' sons contacted the newspaper to say its version of events was accurate.

Nathan Phelps told The Associated Press in a phone interview Sunday night that church members had voted Phelps out of the church "after some kind of falling out."

He added that Fred Phelps and his wife were moved out of the space they had long occupied above the church and into a nearby house. Afterward, the church founder stopped eating and drinking, the younger Phelps said.

The AP reports that Nathan Phelps "said he has no doubt some people would want to protest his father's funeral but added, 'I wish they wouldn't.' "

The possibility that Fred Phelps might die has led to questions over how Westboro Baptist might continue, and whether the church's followers would persist in their attempts to garner publicity for their views at funerals and other events.

A look at the church's website shows no break in its "Picket Schedule," which lists upcoming shows by the singer Lorde and comedian Kathy Griffin as targets. The site also features a video titled "Aye, God Hates St. Patrick's Day," featuring spokesman Steven Drain, who is mentioned by Nathan Phelps as a possible successor to his father.

On Sunday, Drain told the Capital-Journal that Westboro Baptist doesn't have a central leader. "The Lord Jesus Christ is our head," he told the newspaper.

Nathan Phelps says both his brother Tim and Drain have "shown the fire" that would be required of the church's pastor. But he also tells the Capital-Journal that several long-time church members "could get up and do the same job as the old man has done. They've heard [the preachings] a million times."