Accessibility links
Search For Flight MH370 Reportedly Largest In History : The Two-Way Since the Malaysia Airlines jet with 239 people aboard vanished on March 8, it has set in motion a search-and-rescue mission that spans thousands of miles and involves more than two dozen countries. 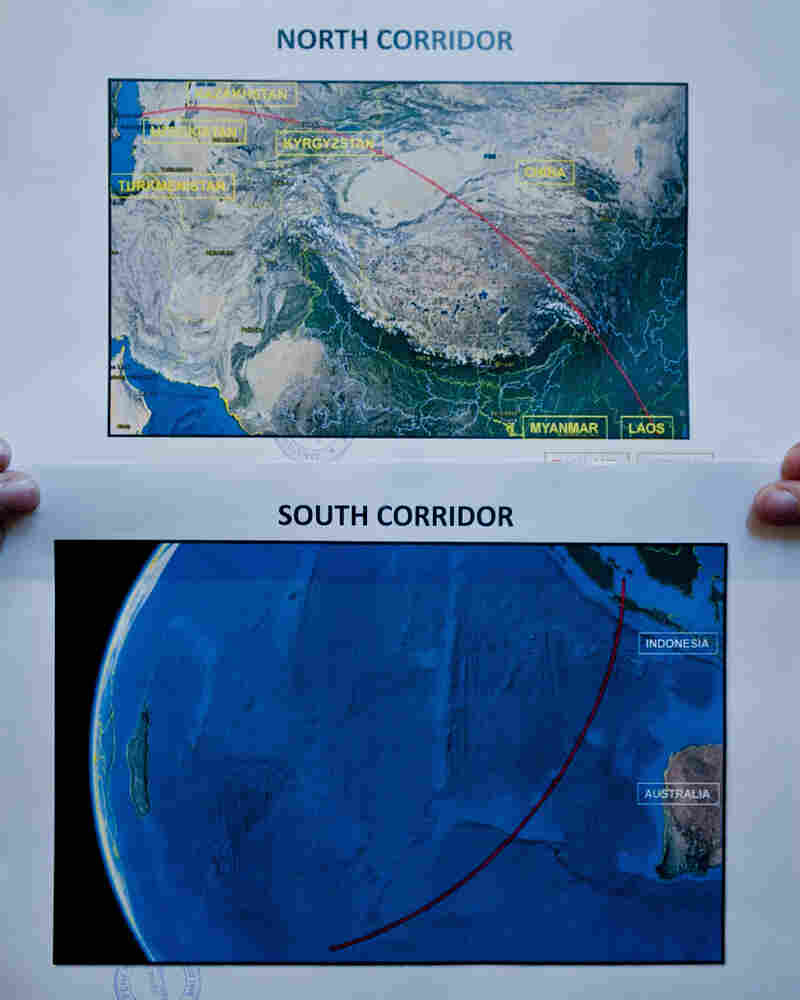 Two satellite maps of the possible location of the missing Malaysia Airlines Flight MH 370 are seen at a news conference in Kuala Lumpur, Malaysia, on Monday. He Jingjia/Xinhua/Landov hide caption 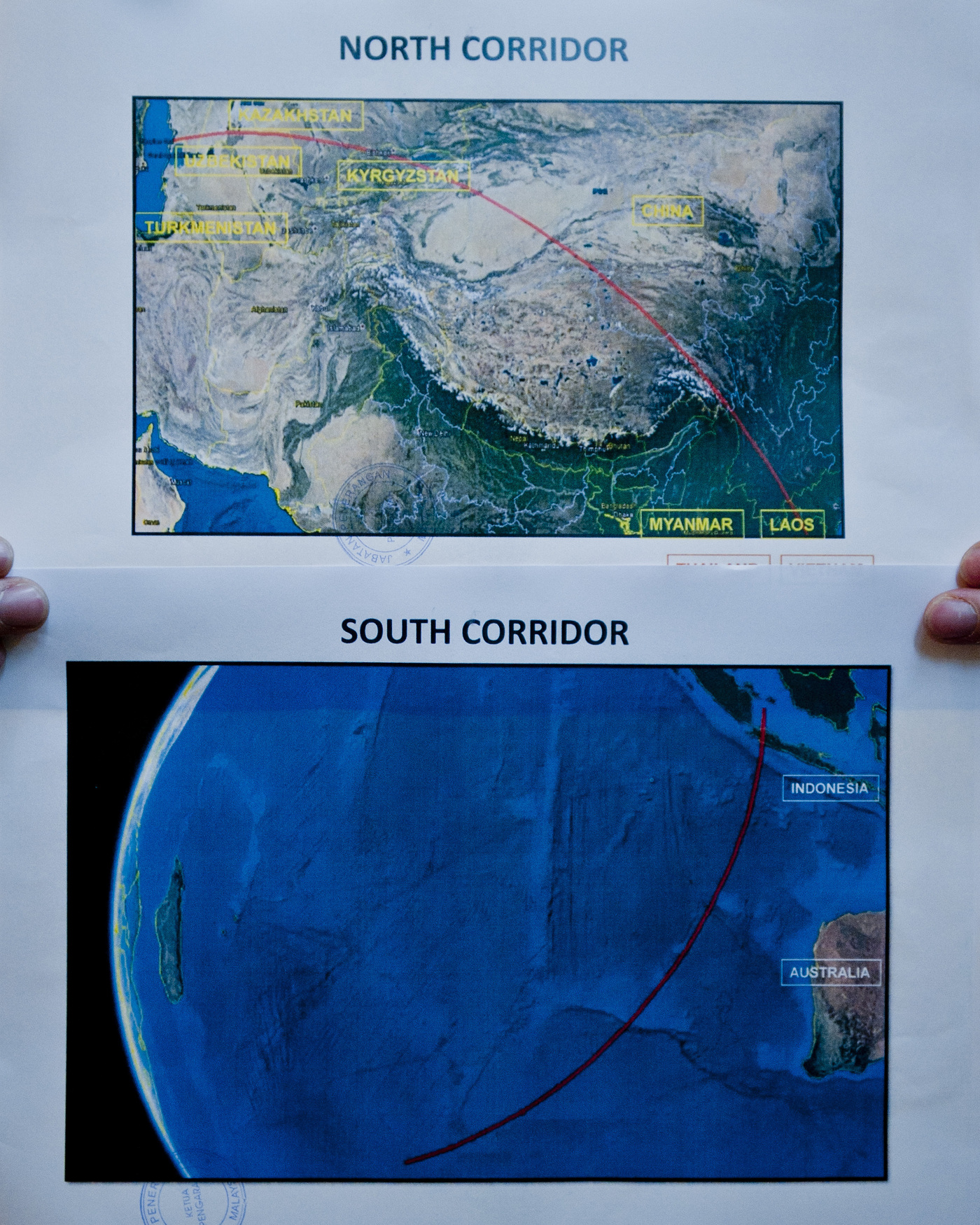 Two satellite maps of the possible location of the missing Malaysia Airlines Flight MH 370 are seen at a news conference in Kuala Lumpur, Malaysia, on Monday.

The disappearance of Malaysia Airlines Flight MH370 has spawned the largest-ever multinational air-sea search — involving ships, airplanes from at least 14 countries and requests for radar information from as many as 26.

The nature of the search, in which such an enormous stretch of the globe is being scoured, is also equally unprecedented, officials say.

On Saturday, Malaysian Prime Minister Najib Razak said that 14 countries, 43 ships and 58 aircraft are looking for the plane. The country's defense minister, Datuk Seri Hishammuddin Hussein, said representatives from an additional eight countries along the northern and southern corridors of where the flight is thought possibly to have traveled have been contacted. Among the countries participating: Kazakhstan, Uzbekistan, Kyrgyzstan, Turkmenistan, Pakistan, Bangladesh, India, China, Myanmar, Laos, Vietnam, Thailand, Indonesia and Australia.

And The Wall Street Journal, in a story published Monday, said, "Malaysia has requested radar information and search assets from the 26 countries involved."

"This is unprecedented," Cmdr. William Marks, spokesman for the U.S. Navy's forward-deployed 7th Fleet, which is leading the operation to the west of Malaysia, is quoted by The Washington Post as saying.

Marks, who is aboard the destroyer USS Kidd in the Indian Ocean, compared the search process to the "mowing your lawn" in a methodical series of swaths.

" 'You can go in an up-and-down pattern. Or you can start in a point and do an expanding square. And loop around, getting bigger and bigger.' The latter method, he said, is used when there's a likely search position. In this case, with so much ocean to cover and few clues, they've been going up and down."

According to a news release, the Kidd is using its helicopters, is covering 1,500 square miles of water space every day and "is meticulously investigating anything that may be evidence associated with aircraft debris." But even that seemingly large area is a small part of the total search grid.

[Add at 6:30 p.m. ET: NPR's Tom Bowman confirms that the USS Kidd is "heading back to the Strait of Malacca after searching the Andaman Sea. The P-8, which had been searching the Bay of Bengal, has been redeployed to Australia to search the southern route."]

"The largest rescue flotilla in Chinese naval history — four warships and five civilian and commercial vessels — was speeding overnight to waters between Malaysia and Vietnam where missing Malaysia Airlines flight 370 may have crashed.

"Three of the four warships were dispatched by the People's Liberation Army South Sea Fleet, including two of its biggest and most advanced amphibious dock landing ships, the 20,000-tonne Jinggangshan and Kunlunshan, as well as the missile destroyer Haikou."

An unnamed search-and-rescue expert is quoted in Flightglobal as saying that though the search area is large, it is getting even larger every day as winds and currents might spread any wreckage — if any exists — farther afield.

"The best sensor for SAR remains the human eye, which is why maritime patrol aircraft are all designed with the ability to fly low and slow to detect survivors or small debris," the expert was quoted as saying.