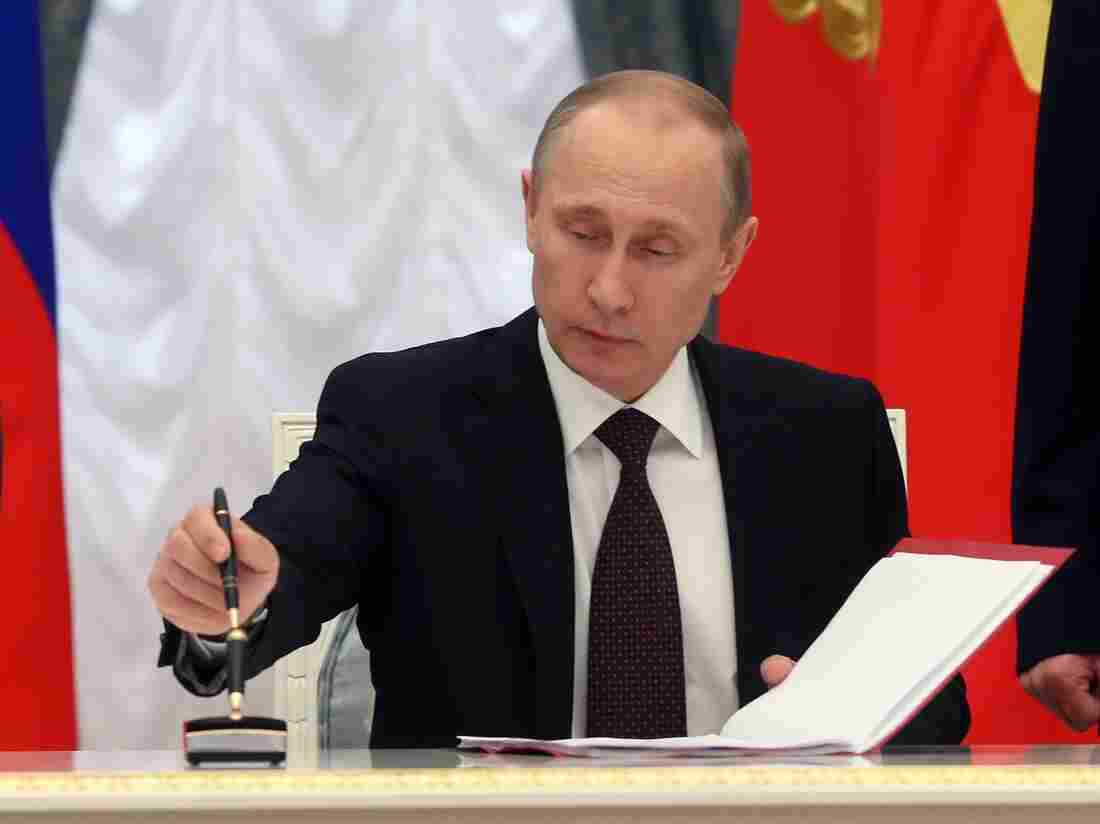 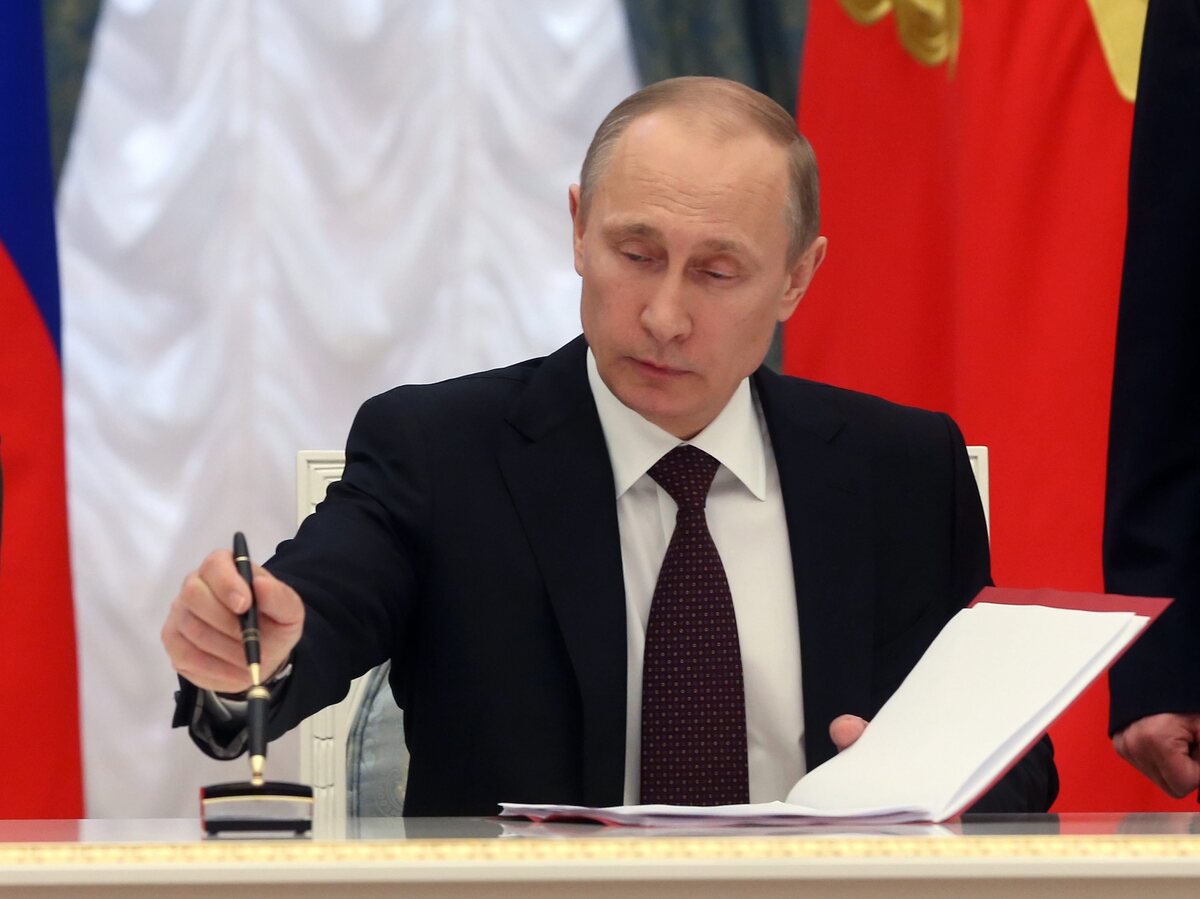 On Friday in Moscow Russian President Vladimir Putin signs a bill making Crimea and the city of Sevastopol part of Russia.

The United States and Europe need to stand together against Moscow in the wake of its incursion in Crimea, keeping the door open for Ukraine and other countries to join NATO, former U.S. officials tell NPR.

Strobe Talbott, president of the Brookings Institution and a former deputy secretary of state in the Clinton administration and Stephen Hadley, former National Security Advisor to President George W. Bush, spoke with All Things Considered on Friday. The two agreed that the West's diplomatic efforts should be focused on dissuading Russian President Vladimir Putin from further aggressive moves.

How Should The West Respond To Crimea?

"The key thing" is for the U.S. and Europe to "maintain maximum solidarity so that this is not just a U.S. sanctions policy and it does not give the Russians a chance to split us," Talbott ATC tells host Robert Siegel.

Europe is "properly, I think, concentrating on the banking sector, because the banking sector, if it is pressed and pressured by these sanctions, may lead powerful people around Putin to begin questioning the wisdom of what he has done and perhaps putting brakes on bad things he might do," he says.

Asked whether Ukraine should be brought into NATO or remain a sort of neutral buffer state between Europe and Russia, Talbott thinks "neither."

"It would be counterproductive, which is a word we use here in Washington to mean 'stupid,' if we were to basically make a promise to Ukraine that we couldn't keep, such as to bring them into NATO as soon as possible," he says. "That would just be provocative and it would not make the lives of the Ukrainians any better.

"Nor should we say that they are going to be forever in a security limbo as a buffer state," he says. "We should keep the question of the future of NATO, the expansion of NATO on the agenda, but we should not talk about that now."

According to Hadley, military action, either now or in the future, is impractical.

"It's very difficult once the Russians start to move, just as a matter of geography, for us to respond," he says. "So, what you need is a set of policies that will make Russia decide that such a course of action is ill-advised. "

First, he says, we must "impose real costs for what [Putin] has done until he is no longer tempted to run this play again – we saw it first in Georgia in 2008, now in the Crimea with respect to Ukraine."

Second, he says, Europe "needs to make clear that the door is open for countries of central and Eastern Europe to come into the EU."

What is Putin Thinking?

Talbott warns that "changing Vladimir Putin's mind is a loser. He is in a 'make-my-day,' 'bring-it-on' [mode]. He called Putin's move in Crimea, which represents the first time Russia has moved beyond its post-Cold War borders, an "ultimate red line."

"He has a pretension for, in some sense, a new Russian empire and that is what he is trying to build," Hadley says. "A key element of that is Russians outside of Russia's borders."

Putin, says Hadley, holds a fundamentally different view of the post-Cold War order as does the West: "We thought that at the end of the Cold War, boundaries were going to be respected, sovereignty was [to be] respected, use of force explicitly or coercively was off the table, [and] that countries could choose their own alliances."

"That's not how he sees it," Hadley says.

Instead, Putin wants to a world "in which he brings into a Russian sphere of influence countries such as Kazakhstan and Belarus, [which] he already has, and particularly Ukraine.

"With Ukraine, [Russia] has real force, without Ukraine, it is much weaker," he says.

Hadley points to Putin's speech announcing the annexation of Crimea in which the Russian leader referred to the collapse of the Soviet Union when "overnight [Russians] were minorities in the former Soviet republics, and the Russian people became one of the biggest — if not the biggest — divided nations in the world."

(As we reported earlier this week, large ethnic Russian populations in former Soviet satellite countries have made for nervousness in those border regions since the Crimea incursion and the Russian invasion of Georgia's South Ossetia region in 2008)

That sentiment – that Russian minorities were essentially orphaned by the fall of the USSR, is what informs Putin's strategy, Hadley says.

By "taking a chunk" out of countries such as Georgia, Ukraine or Moldova, "he has frozen them in this neverland between Russia and the West because the western European countries are unwilling to take into the EU or NATO a country that has a territorial dispute with Russia.

"We have got to send a message to Putin that that ploy won't work," he says. "That is why sending messages [that] the EU and NATO are open to Ukraine and Moldova and Georgia is such a terribly important signal to send."