Accessibility links
Angry Relatives Of Passengers On Flight 370 Demand Answers : The Two-Way Holding banners with messages like, "Hand us the murderer" and "Give us our relatives back," the family members chanted, "Tell us the truth," at a news conference in Malaysia. 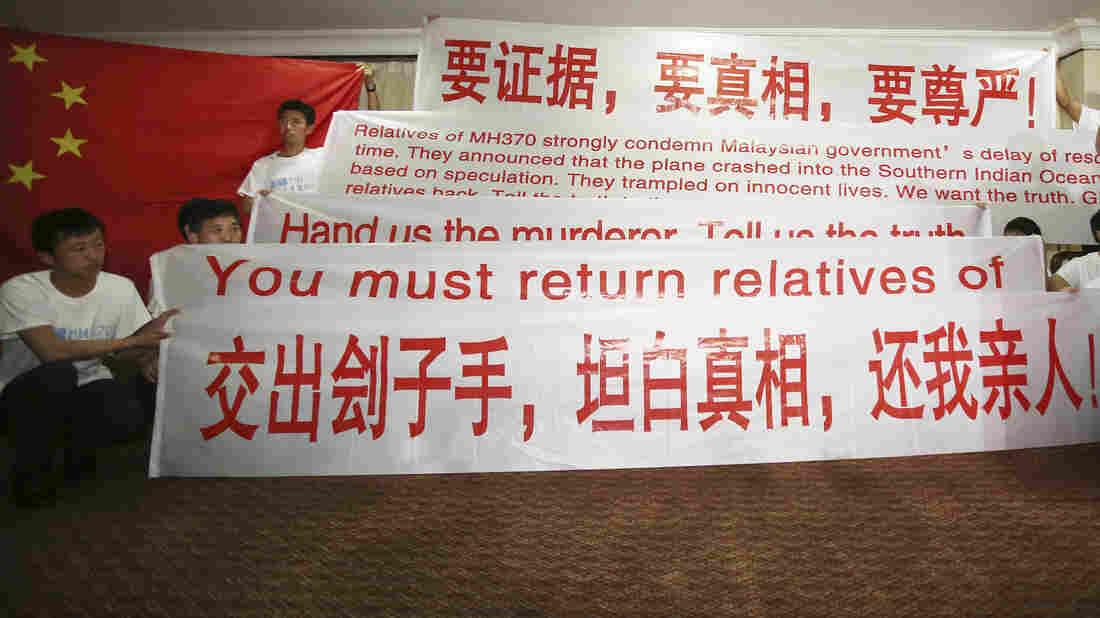 Newly arrived Chinese relatives of passengers of the missing Malaysia Airlines flight MH370 hold banners while talking to reporters at a hotel in Malaysia Sunday. The search continues for the jetliner that went missing three weeks ago. Aaron Favila/AP hide caption 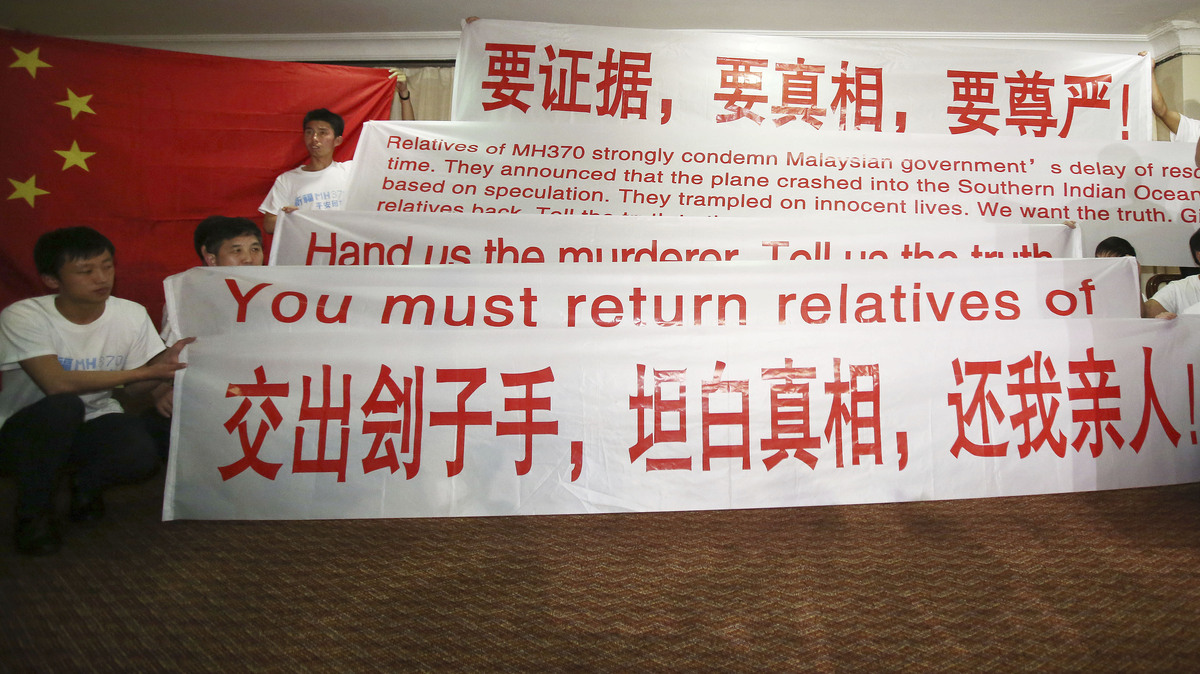 Newly arrived Chinese relatives of passengers of the missing Malaysia Airlines flight MH370 hold banners while talking to reporters at a hotel in Malaysia Sunday. The search continues for the jetliner that went missing three weeks ago.

Families who lost loved ones on Malaysia Airlines flight MH370 are asking Malaysian officials to explain what happened to the jet that went missing three weeks ago. Dozens of relatives of the missing passengers arrived in Kuala Lampur from China Sunday.

Holding banners with messages like, "Hand us the murderer" and "Give us our relatives back," the family members chanted, "Tell us the truth," at a news conference held at a hotel after their arrival Sunday. Around two-thirds of the flight's passengers are Chinese. The plane had been heading to Beijing when it disappeared.

At the hotel, a banner stated that the relatives "strongly condemn" the Malaysian government's handling of the situation. It read, "They trampled on innocent lives. We want the truth."

On Sunday, Malaysian officials promised to give detailed information about the missing flight to the families, who have complained that the government has been slow to distribute news and has added to confusion surrounding the flight.

China's ambassador to Malaysia and other officials "conveyed the Malaysian pledge when they met with 29 relatives upon their arrival" in Kuala Lampur Sunday, reports Chinese state-run media agency Xinhua.

The relatives' search for answers comes as eight military ships and 10 aircraft step up the search for the debris from the flight in the southern Indian Ocean near western Australia.

On Monday, the search vessels will include an Australian craft outfitted with a black box detector that can pick up a signal from around 6,000 meters below the water's surface, according to Australia's ABC news agency. The device was provided by the U.S. Navy, along with a submersible vehicle that can map a debris field.

Australia has put a former defense chief in charge of the search for the missing airliner.

From Sydney, Stuart Cohen reports for our Newscast desk that debris that was found in the most recent search zone hasn't been tied to the missing Boeing 777:

"Retired Air Marshal Angus Houston will head a new coordination center in the Australian city of Perth. He'll supervise the massive international search that's been going on for more than a week now off the west coast of Australia.

"While Malaysia still holds the ultimate responsibility for the missing plane under international law, Houston will handle day-to-day communications and coordination of all the countries, as well as deal with an increasing number of families of passengers expected to travel to Australia as the search progresses.

"Out in the Indian ocean, two Malaysian air force planes have now joined the search for the first time. Chinese and Australian navy ships have recovered several objects spotted by planes over the past couple days, but most of it has turned out to be debris from fishing boats."

Today, Malaysia Airlines said that it will "fly family members to Perth, only once it has been authoritatively confirmed that the physical wreckage found is that of MH370."