Accessibility links
Arizona Fans Riot After Close March Madness Loss : The Two-Way Students and fans hurled beer and fireworks at police after an overtime defeat Saturday night. The police responded with dozens of rounds of pepper balls and force.

Riot police were deployed in Tuscon last night, after University of Arizona students and fans took to the streets to vent their anger over a 1-point loss in overtime that ended their men's basketball team's hopes of playing for a national championship.

A large crowd formed on University Boulevard after watching the game at bars and restaurants near the university's Main Gate Square — and not far from where police had been positioned earlier in the night. The fans chanted "U of A," according to student newspaper The Daily Wildcat, along with a profane chant about Wisconsin, the school that ended their playoff run.

The students and fans refused to obey an order to leave, after Tucson police declared the crowd an unlawful assembly. Instead, they hurled beer bottles and cans and fireworks at police.

"Dozens of students and fans were shot with pepper balls by riot police, including a Daily Wildcat editor," the newspaper says.

One man defied police orders by walking toward them with his arms outstretched as pepper-ball rounds bounced off his chest. He was eventually tackled by several officers. That portion of the confrontation was captured on video, showing the man smiling as he walked slowly toward the police line.

Some 60-70 police officers formed ranks in the street to corral the students and fans, according to KGUN, which reports 15 arrests during the episode.

The students were frustrated by the Wildcats' 64-63 loss to Wisconsin Saturday night at the West Regional final in Anaheim, Calif. A win would have sent the team to the Final Four and a possible bid for the national title.

The game was close throughout and was marked by controversy at the end, as Arizona's star guard, Nick Johnson, was called for a foul on the offensive end with seconds remaining in overtime.

"I thought it was a really, really tough call," Wildcats coach Sean Miller said after the game, according to the Arizona Daily Star. "I'm going to stop there. I've already been fined." 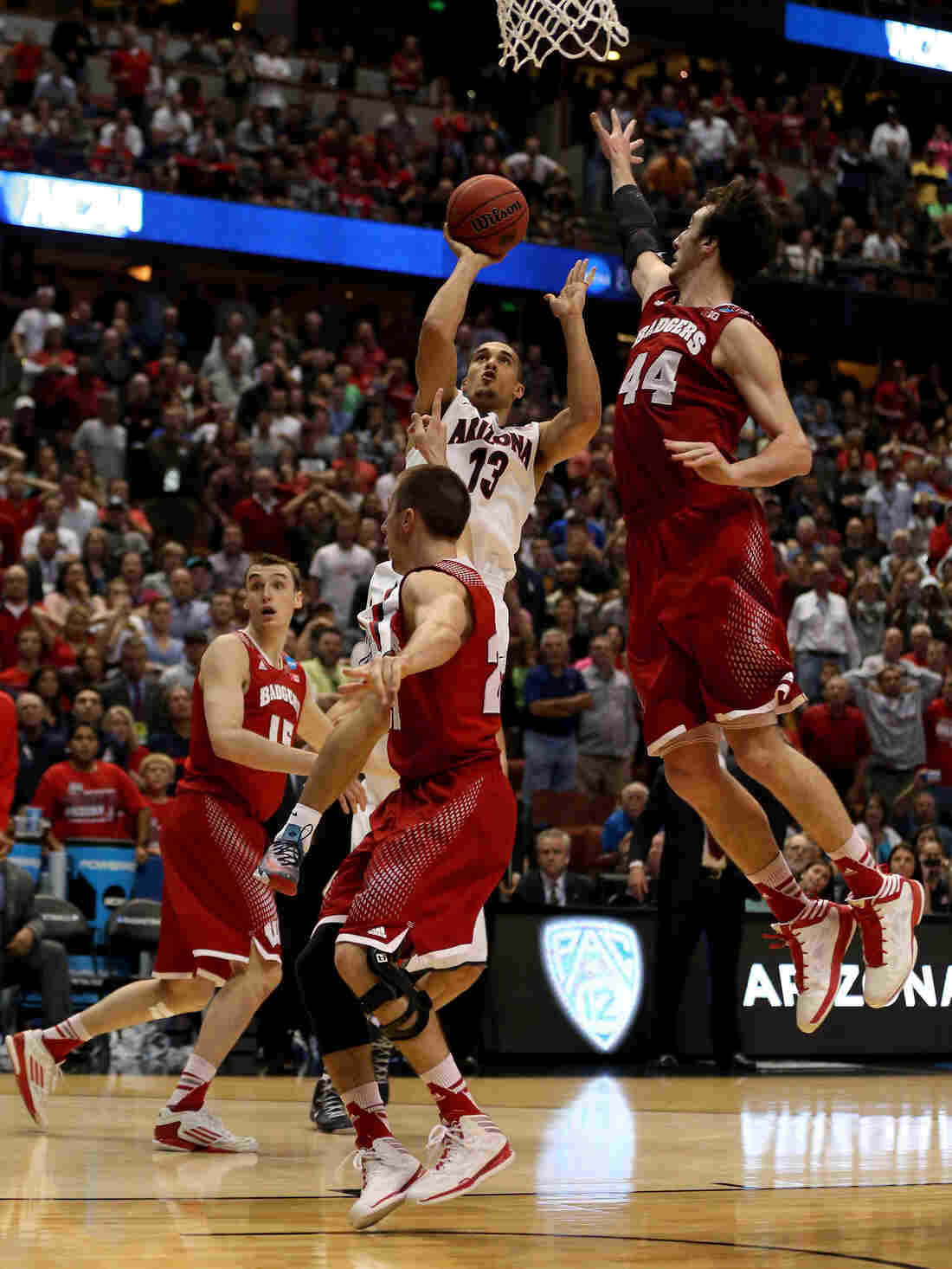 Nick Johnson of the Arizona Wildcats is called for an offense foul as he drives on Josh Gasser, No. 21 of the Wisconsin Badgers, in overtime during the West Regional Final of the 2014 NCAA Men's Basketball Tournament. Arizona's fans rioted after the close loss. Jeff Gross/Getty Images hide caption 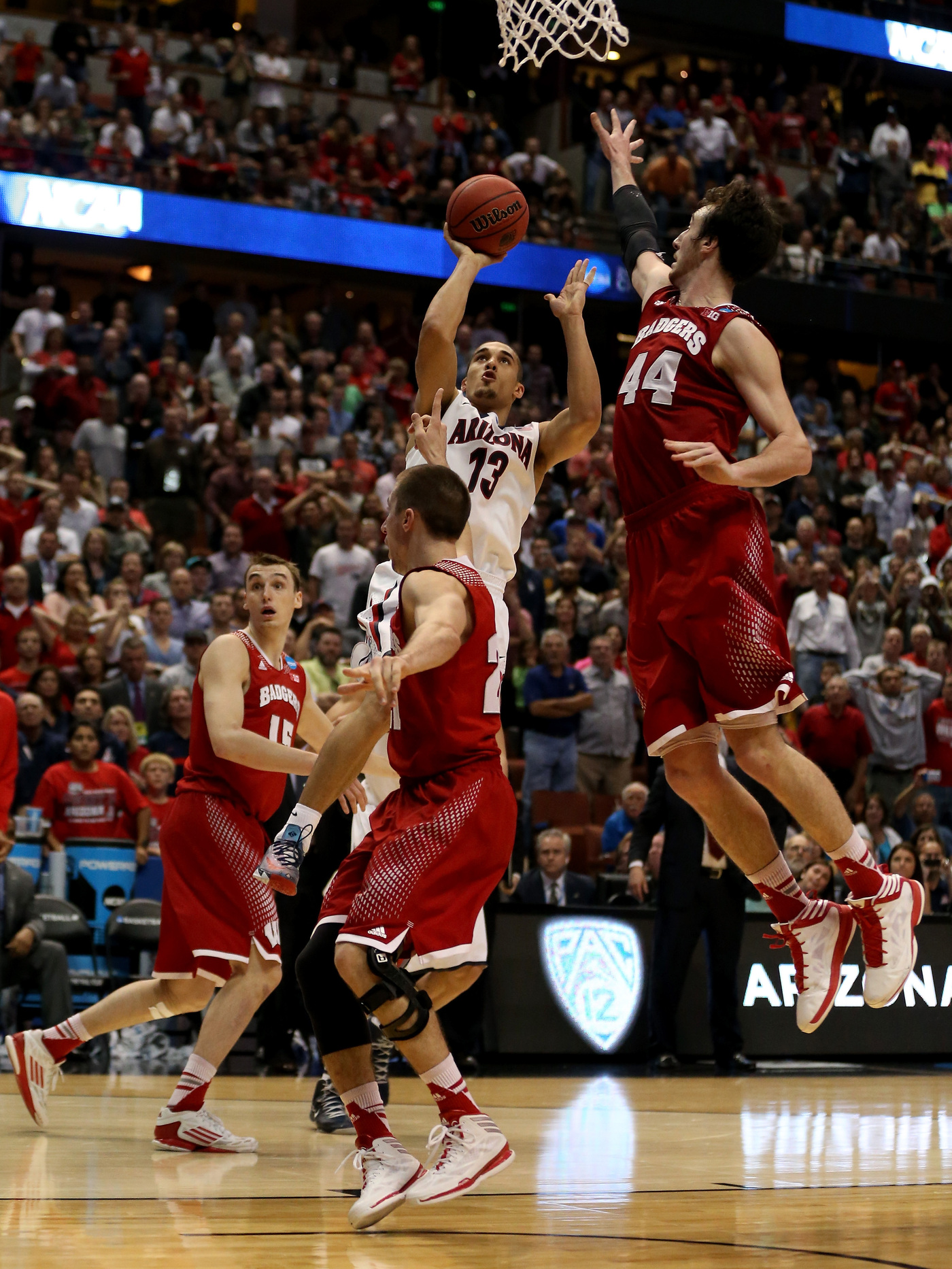 Nick Johnson of the Arizona Wildcats is called for an offense foul as he drives on Josh Gasser, No. 21 of the Wisconsin Badgers, in overtime during the West Regional Final of the 2014 NCAA Men's Basketball Tournament. Arizona's fans rioted after the close loss.

Johnson and Arizona had another chance to win the game with just two seconds left. But he wasn't able to get a winning shot off before the final horn sounded.